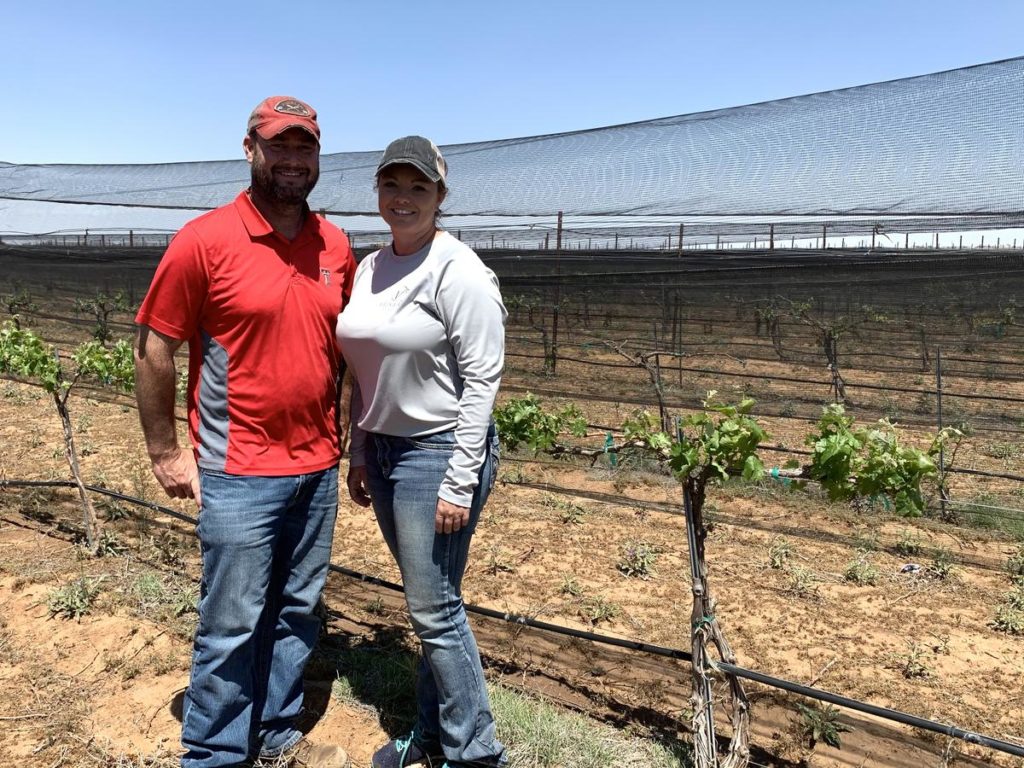 Jason Centanni walked around Veesart Vineyards in Shallowater recently, seeing how everything looked following an unexpected freeze just before the start of growing season.

Some areas looked a little worse for wear, but other parts were covered in bright green grape clusters slowly coming in, with more sure to follow.

“Just the potential these vines have, it’s not all lost,” said Centanni, a winemaker for Llano Estacado. “We’ve got leaves coming up, making an effort, we’ve got clusters showing up — we’ve got wine making potential here.”

Grape growers in the Texas High Plains are starting to see their vineyards bloom and come to life, even after facing potentially-damaging weather this year. The winter storm in February was, luckily, too early in the year to have much of an impact on this year’s crop.

But just a few weeks ago, the weather took a chillier turn and that did take a toll on Veesart Vineyards. Some of the leaves that had started coming in turned into mulch, while some baby grape clusters were lost altogether.

“It looks rough right now, but these things bounce back and you have to look at it through a different lens sometimes,” Centanni said. “I’ve been in this industry for 15 years, so it doesn’t scare me. I know the fact that things are coming back out in the right spots, we’ll have a crop.”

The Texas wine industry has grown more every year and is quickly becoming one of the top wine producing states in the country — it is currently the fifth state ranked and is worth more than $13.1 billion according to the Texas Wine and Grape Growers Association.

Part of that success is due to the growers in the High Plains, where Centanni said most of the grapes in the state are grown.

Jason and Amanda Veesart, who own and operate the vineyard, have been growing grapes for two years and seem to have it down to a simple science — trust the vine’s process and help where and when it’s possible.

“Grapes are very resilient,” said Amanda. “If you let it do it’s own thing and not worry about it, it’ll come back.”

In some instances, it could even come back better.

“We had a heavy, heavy load before the freeze and we were going to have to do some management,” Veesart said. “But now with the damage it’s done and new growth coming back, it almost kind of did it itself.”

Jason said there’s not much they can do about freezing temperatures, but typically the climate in the region does work in their favor. It also contributes to the high quality of wine from the High Plains, he said.

“I think it’s our soils and climate,” said Jason. “We get really hot during the day, but then in the evenings, we cool down, so that helps the plant naturally shut down and helps with sugar development, and all of that comes together to make a good, high quality product.”

Centanni agreed, adding that the special flavors and varieties that come out of wine from the High Plains is what makes it memorable.

“It’s unique in the world of grape growing,” Centanni said. “Our sandy soils are unique, our elevation, there’s nowhere in the world like West Texas.”

The Veesarts are already preparing for the hot Texas summer, but they’re all feeling confident about what will come out of the grapevine at the end of the growing season.

Home Videos The WORLD of WINE – Wine News. Cheap wine, tasting notes and cooking with wine The World of Wine – May 2021 … END_OF_DOCUMENT_TOKEN_TO_BE_REPLACED

How to visit Napa Valley on a Budget. In this video Carson and I explain a few ways to enjoy Napa on the cheap. Tip and advice about how to visit Napa … END_OF_DOCUMENT_TOKEN_TO_BE_REPLACED

Home Videos Get To Know Argentina Wine | Wine Folly If you love Malbec, Argentina is your ultimate wine region. But that’s not … END_OF_DOCUMENT_TOKEN_TO_BE_REPLACED