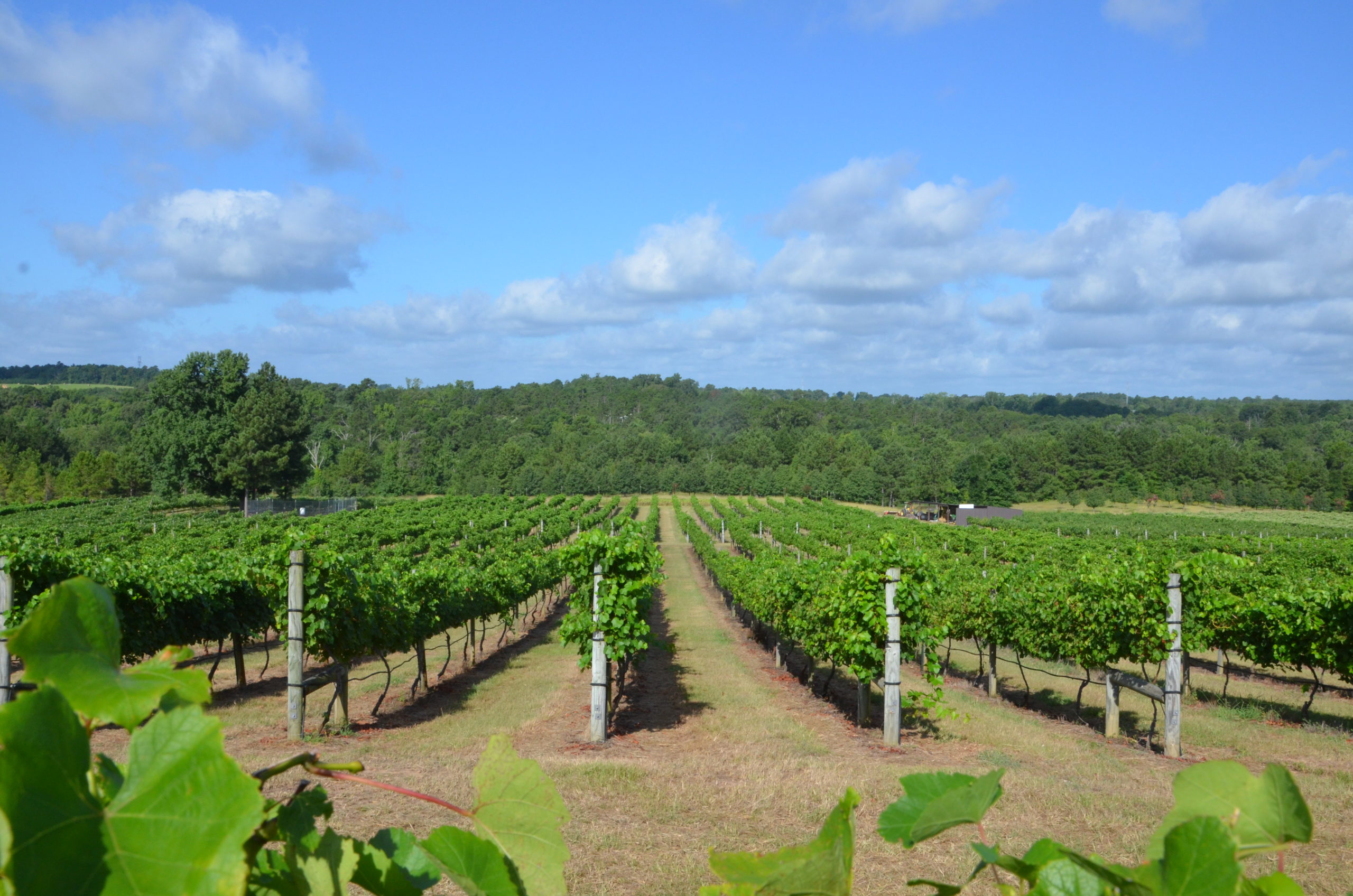 But Texas’ top wine grape region expects to see only half its average yield following an early freeze in 2019.

Harvest was ramping up about 10-14 days earlier than typical, Cook said.

“Wet and warm weather woke the grapes up early this year, but they are growing very well,” he said. “Some areas of the state had severe issues with frost and hail, but 2020 looks to be another great year for most wine grape growers when it comes to quality and yields.”

Growers in North Texas are harvesting white varieties and a few reds now and will harvest most reds in coming weeks, Cook said.

Texas weather was erratic for North Texas vineyards with a significantly earlier-than-average killing frost on Nov.  8, a very wet fall and spring, and an extremely late spring frost between Steph​enville and the Red River on April 16.

Primary shoots and crops of early budding grape varieties such as chardonnay were wiped out where frost occurred, he said. The frost negatively impacted individual growers, but in other areas rain promoted canopy growth and fruit development, and crop quality and quantity were looking good.

Cook said established vines showed more resilience against the fall and spring frosts, but younger vines in newly planted vineyards or expanded acreage were damaged to the trunk, making vines susceptible to diseases like crown gall.

This was a setback for many new growers as they will have to either rogue and replant infected vines or retrain vines that do not exhibit crown gall infection, to which there is no cure, he said.

Disease pressure remained elevated during the wet spring, but most growers were successful in applying preventative measures during critical times, Cook said.

“Our main challenge from a management standpoint this year was the cold snaps and some wind,” he said. “The wind damage wasn’t serious, but leaf tatter had growers on edge. It can impact young vines, but mostly it just looked bad and had growers worried it might be something more serious.”

Brianna Crowley, AgriLife Extension viticulturist, Fredericksburg, said vines in Central Texas experienced a standard bud break and no late-spring freeze. Fruit sets were average to above average, and some vines required some thinning of fruit.

“It was one of those storms where you can see the distinct lines in the areas it covered,” she said. “You could also see the directionality of the storm row to row. Grapes on one side if the vines were hit hard whereas grapes on the other side had little to no damage.”

Crowley said one vineyard reported losing 60% of its crop while vineyards near Kerrville reported 40%-50% losses despite putting up hail netting. Vineyard managers treated vines after hail to prevent diseases from entering vines via wounds and to promote regrowth.

Drought followed the hailstorms, she said. But the lack of rain has not negatively impacted early varieties being harvested now.

Brix counts, which is the measurement of sugar in fruit, and pH levels have been average to above average so far, Crowley said. Grape quality at harvest for AgriLife Extension trial plots in Fredericksburg were excellent.

“The pH levels were up due to drought for some varieties, but we had brix counts at 25 and 3.6 pH for others, which is spectacular for winemaking, in those trial plots,” she said. “But overall, I am hearing growers reporting quality grapes. Fruit looked clean where it was properly managed.”

Crowley said growers are waiting for late-season varieties and deeper reds to mature, and that rains generated by Hurricane Hanna could affect brix and pH levels, especially in southern parts of the state.

Hard times on the High Plains

Leaves and fruit were still on the vines at some locations when a bud killing frost came early in October, he said. Dormant vines were also exposed to seven or eight hard freezes throughout winter.

“There was a lot of winter injury showing up this year,” he said. “This year’s cropload is a lot lower than normal and spotty. Some plots are doing great while others will need to be completely replaced.”

Hillin said the damages varied from location to location and even by vine variety.

On top of crop and vine losses, Texas wine grape growers have been faced with challenges associated with COVID-19 restrictions on gatherings and fluid state regulations on wineries, Cook said.

Wineries and vineyards have struggled through the pandemic but are finding clever ways via social media and delivery and pick-up options to market their wines. Elaborate annual harvest parties have been scaled back or cancelled.

COVID-19 restrictions have impacted retail aspects of vineyards, but most operations have moved employees to manage the grapevines, Cook said. Smaller groups of workers worked shorter shifts to manage grapevines and during harvest.

“Wineries have been hit really hard by the shutdowns, but the vineyards have never looked better,” he said. “It’s been a challenge, but vineyards have gone virtual to survive, and they’re finding creative ways to promote their wines and keep a connection with consumers.”

Hillin said he will be interested to see how the tonnage losses in the High Plains affects wine grape prices. He suspects they will climb, but said COVID-19 may dampen demand following two bumper crop seasons in a row.

“Prices are going to go higher on certain varieties, but it remains to be seen because many wineries have full tanks from the previous year,” he said. “There are different challenges every year. The weather, freeze damage and now the shutdowns. But resiliency doesn’t even begin to describe these growers. As with most things, Texas has some of the best. They are not giving up, and I haven’t heard anyone who is throwing in the towel because of setbacks this season.”

Some rain helped soil moisture levels, but more rain was needed, especially in drier areas. Weather continued to be hot and humid, but most pastures were green and in good condition overall. Some crops and pastures were burning up. Cattle remained in good condition. Many producers put up some hay throughout the season, and stock tanks looked good. Landscape plants were showing signs of heat stress. Cotton looked good, and some fields were in the boll split stage. Fusarium root rot was developing in some cotton under dry conditions but was not widespread. Hot, dry conditions hastened corn maturity. Corn and sorghum silage harvests continued. Grain corn harvest began, and yields were good, but prices were low. Sorghum harvest also began. Sugarcane aphids were present in several fields.

Temperatures were hot, but some areas received rainfall. Along with the rain, Archer and Baylor counties reported several wildfires started by lightning. Cattle were receiving supplemental feed in areas where pastures and forages were in poor condition. Grasshoppers continued to be an issue throughout the district.

Hot weather and breezy conditions continued to decline soil moisture levels. Hurricane Hanna delivered up to 2.5 inches of rain in some areas. Southern parts of the district reported some cotton was knocked out of bolls and strung out, likely reducing the expected yields in those fields. Most areas escaped damage from the hurricane. Some cotton was being defoliated, and some was ready to harvest. Corn and sorghum harvests were underway. Rice was heading and some was being harvested. Pecan producers were monitoring for scab and aphids and spraying accordingly. Some hay fields were cut and baled. Pastures improved considerably where rain fell, but more was needed to replenish stock tanks and ponds. Livestock were doing well.

Most of the district received scattered showers. Sabine County reported at least 1 inch in many parts of the county and some areas received multiple inches of rainfall. Pasture and rangeland conditions were good. Subsoil and topsoil conditions were adequate. Hay production was still going strong. Producers were on the lookout for armyworms. Feral hogs remained active and caused damage to pastures and hay meadows.

Dry conditions continued across the district, with some sporadic rainfall ranging from zero up to 1.25 inches. Corn was struggling to progress. Farmers were having to decide if they were going to continue irrigating. Early planted cotton was setting blooms. Most cattle were still in good condition with supplemental feeding.

Topsoil moisture levels were adequate to very short. Cooler weather delivered relief from the heat. Rainfall totals in areas that received rain ranged from trace amounts to 2.5 inches. Crops, from soybeans, cotton and hay fields, in areas that did not receive rain were struggling. Crops in areas that received rains were progressing well. Most managed Bermuda grass hay meadows produced two cuttings so far. Livestock were in good condition. Spring-born calves were doing well. There were isolated reports of armyworms, but grasshoppers were worse than normal in a few areas. Feral hogs were active.

It was another hot and dry week. Most of the dryland sorghum had burned up and was not making heads. Dryland cotton was struggling and needed a good rain, while some had been plowed up. Corn and sorghum harvest were expected to start soon. Pastures were getting dry and wildfires were expected to continue to be an issue. Livestock were in fair condition.

Moisture conditions continued to decline with the hot and dry weather. Pastures and row crops showed signs of stress. Sorghum harvest was in full swing, with average yields reported. Corn harvest was expected to begin soon. Cotton looked good, but only a small percentage of acres were starting to set bolls. Livestock were in fair to good condition. Livestock prices were steady. Supplemental feeding was provided for livestock and wildlife.

Northern parts of the district reported hot and dry weather with very short soil moisture levels. Western areas reported hot weather and some rain with adequate to very short soil moisture conditions. Eastern areas reported high temperatures and short to very short soil moisture. Southern areas reported hot weather and surplus to adequate soil moisture levels. Hogg County reported 2-7 inches of rainfall. Landowners in southern parts of the county reported 9 inches of rainfall. Hurricane Hanna passed through Willacy County with winds that reached 90 mph and rainfall totals estimated between 11-15 inches. Rains should help grazing conditions and replenished stock tanks. But storms also caused crop damage. The majority of sesame plants in those areas were knocked down. Cotton bolls that were recently defoliated were torn off the plant due to high winds. Many fields were under water and will be assessed when producers can access them. Temperatures were around 100 degrees for much of the district. Grain sorghum, corn and hay harvests were complete in most areas. Grain sorghum yields were poor to average. Peanuts were in the pegging stage, and cotton bolls were opening. All crops were under irrigation where available. Native grasses and food plots dried up without irrigation. Live Oak County reported declining crop and livestock conditions. Irrigated crops like cantaloupes, watermelons and Coastal Bermuda grass were in full production. Pecan orchards were in good condition. Supplemental feeding for livestock was increasing where hot, dry conditions persisted. Sesame made good progress.

Home Videos The WORLD of WINE – Wine News. Cheap wine, tasting notes and cooking with wine The World of Wine – May 2021 … END_OF_DOCUMENT_TOKEN_TO_BE_REPLACED

How to visit Napa Valley on a Budget. In this video Carson and I explain a few ways to enjoy Napa on the cheap. Tip and advice about how to visit Napa … END_OF_DOCUMENT_TOKEN_TO_BE_REPLACED

Home Videos Get To Know Argentina Wine | Wine Folly If you love Malbec, Argentina is your ultimate wine region. But that’s not … END_OF_DOCUMENT_TOKEN_TO_BE_REPLACED