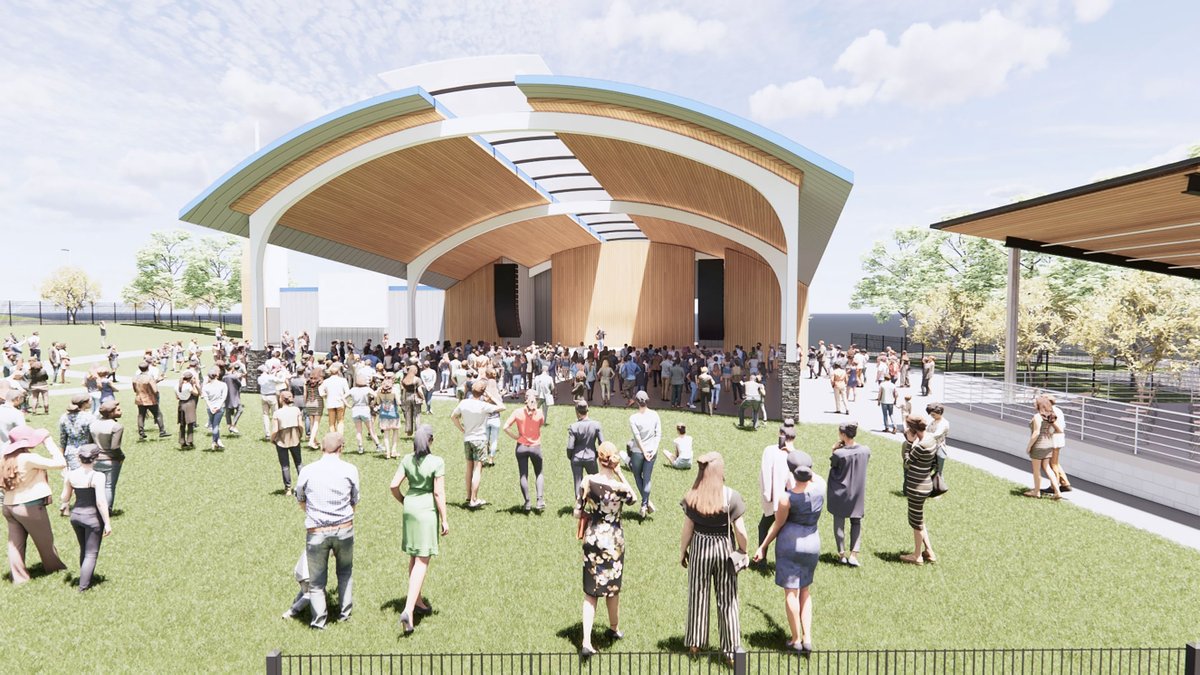 Construction of the Village Green entertainment area at Stadium Trace Village is expected to begin in March or April, according to Wes Keith, the managing partner for the venture.

The 2.5-acre complex is scheduled to include an outdoor amphitheater that can accommodate 1,200 people comfortably, an artisan market, art gallery with space for working artists, wine tasting room, food and beverage vendors, playground and outdoor game area, and studio room for classes such as yoga, pilates and martial arts.

The Village Green will be divided into two main parts: the green (for the amphitheater) and the village (for everything else).

The amphitheater, which should take up about 1.5 acres, is being designed to accommodate everything from intimate concerts from national touring artists and local groups to other performing arts, movie showings, sports viewings (on a big video screen), corporate events, group and family gatherings, weddings and parties.

“The plan is to build a 35-by-40-foot covered pavilion that can serve as a stage or party location and accommodate up to 150 people under the roof and more on the grass,” Keith said. “For concerts, there will be a covered VIP area with reserved seating for 110 people about 80 feet from the stage and to the side a bit.”

The grass area will be divided into an artificial grass surface closest to the stage (for easier maintenance and to prevent mud and slip hazards) and a natural grass berm beyond that. The amphitheater will be slightly sloped but level enough to accommodate outdoor chairs.

Keith, who has been in the music industry about 25 years, has produced many major music festivals, including the New Orleans Jazz Heritage Festival, which has drawn as many as 500,000 people over eight days. Others he produced have included the Bayou Country Super Fest at LSU’s Tiger Stadium and the Superdome, the Florida Country Music Fest at the Everbank Field in Jacksonville and the Country 500 at Daytona International Speedway.

However, he said one of the trends in the music industry is smaller, more intimate concert experiences that both the fans and the artists seem to really enjoy. Those kinds of concerts often are sandwiched in between bigger venues as part of tours, and that’s what he plans to do in Hoover, he said.

It would be much smaller concerts than people experience at the Oak Mountain Amphitheater and more along the size of what people attend at Iron City in Birmingham, but he doesn’t think the Village Green will really compete against Iron City.

Keith grew up in Monroe, Louisiana, but his father lived in Hoover when Keith was in college, so he spent about four years in Hoover during the summers and other visits, he said. His wife did her student teaching at Rocky Ridge Elementary.

Keith said he remembers having to drive to downtown Birmingham to see concerts, visit nice restaurants or other artistic events. “We were always leaving Hoover to go do everything,” he said.

Now, he wants to provide those kinds of fun activities in Hoover. “We want to make this a destination,” he said.

He knows that some Hoover officials have a desire to build a performing and visual arts center and that Hoover schools are in need of larger performing arts facilities, and he hopes that the Village Green can serve as a bridge to meet some of those needs until those facilities can be built, he said.

The “village” part of the Village Green will include a 3,000-square-foot building that will include an artisan market that he hopes will feature goods made in Alabama, such as jewelry, candles, stitch work, honey and other items. There should be room for up to 20 artisans but more likely 12 to 15 at a time.

There would also be a 500-square-foot art gallery that includes space for live art creation by artists, about 800 square feet of studio space for rent by the hour for instructors of classes for things such as yoga, pilates and martial arts, and about 300 square feet for a wine tasting room run by a Hoover resident who owns a winery in Calera, Keith said.

A second 3,500-square-foot building would house two restaurants — likely pizza and barbecue vendors from the Birmingham area. That food and beverage building would seat more than 100 people inside plus have outdoor seating for several hundred people.

The village area would also feature a children’s playground with interactive music equipment for kids and outdoor games for all ages, including bocce ball and corn hole and six executive-style putting greens designed to imitate the seventh and eighth holes at Pebble Beach in California, 17th hole at the Sawgrass Country Club at Ponte Vedra Beach, Florida, and the three holes that make up Amen Corner at the Augusta National Golf Club in Georgia.

Keith said he is very excited about the new venture. He and his wife and two children are moving to Hoover from Louisiana. His wife is an artist and president of the Louisiana Art Educators Association.

The Village Green will be open 365 days a year, generally from 11 a.m. to 11 p.m., but some events will require tickets, and the area may be rented by groups at times, he said. The developer of Stadium Trace Village plans to provide about 280 additional parking spaces beyond current available spaces, he said. There will be valet parking available, and he is working with Uber and Lyft to provide ride-share services as well.

He’s confident in the business model and thinks it will be a community-centric and family-friendly environment.

Paulette Pearson, chairwoman of the Hoover Arts Council, said the group is very excited about the Village Green project, and artists are as well.

“The entertainment district will help fill a void for both performing and visual artists,” she said. “Particularly, for visual artists, it will give them a place to not only display their artwork, but also sell it, she said. Since the Artists on the Bluff facility in Bluff Park shut down, many of the artists have scattered, and this will help provide a hub for them.”

“I just think it’s going to really serve a great purpose,” she said.

Some people were initially concerned about the open container nature of the entertainment district the Hoover City Council created at Stadium Trace Village, but it’s not going to be a wild party scene, Pearson said.

Home Videos The WORLD of WINE – Wine News. Cheap wine, tasting notes and cooking with wine The World of Wine – May 2021 … END_OF_DOCUMENT_TOKEN_TO_BE_REPLACED

How to visit Napa Valley on a Budget. In this video Carson and I explain a few ways to enjoy Napa on the cheap. Tip and advice about how to visit Napa … END_OF_DOCUMENT_TOKEN_TO_BE_REPLACED

Home Videos Get To Know Argentina Wine | Wine Folly If you love Malbec, Argentina is your ultimate wine region. But that’s not … END_OF_DOCUMENT_TOKEN_TO_BE_REPLACED