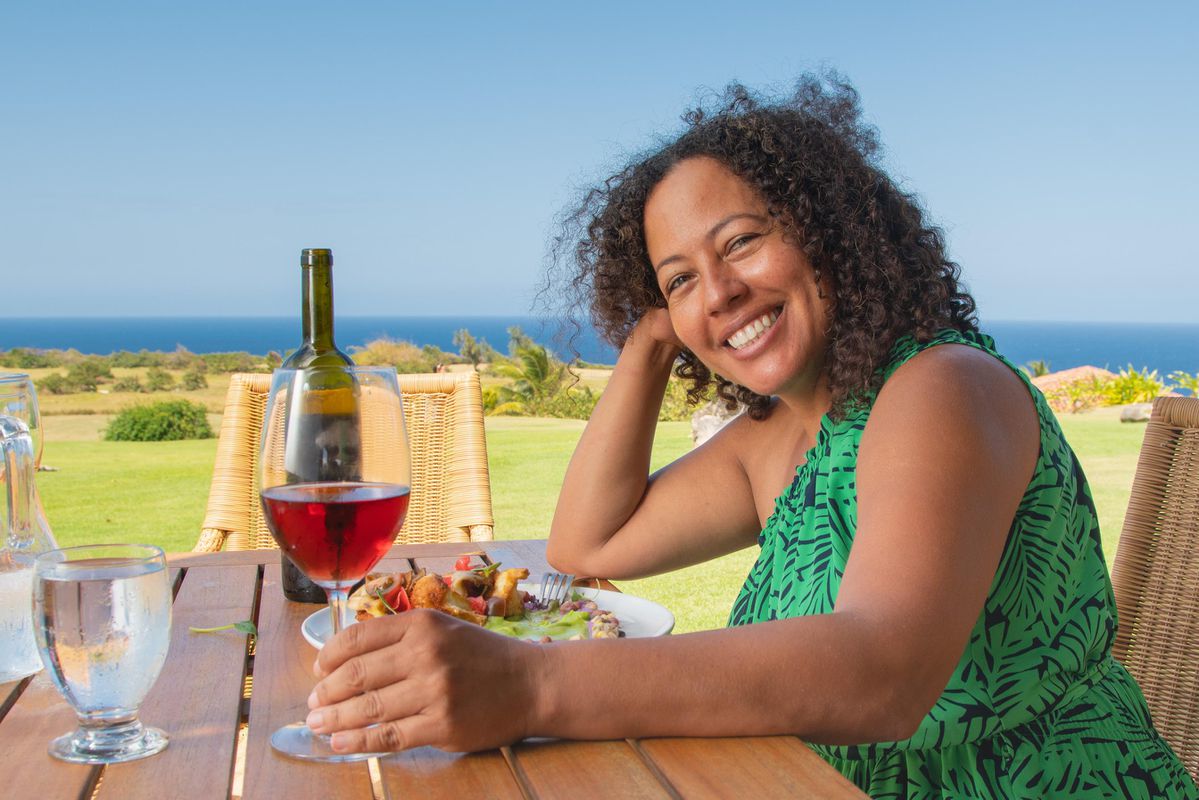 Frances Gonzales, a vegan and wine expert, first became interested in the concept of vegan wines while on a winery tour in France. She heard her guide say the words “egg whites,” which immediately caught her attention. For the first time, she learned that animal products are frequently involved in winemaking, especially during the fertilization and fining processes, creating an end product that isn’t vegan.

With that inspiration, Frances founded a consumer wine club, Vegan Wines, in 2017, as well as a wine importation and distribution company called Despacito Distributors, which specializes in plant-based wines. She often found herself frustrated when trying to order vegan wine in restaurants or locate animal-friendly bottles in shops. Gonzales now seeks to make the process of choosing wine easier for everyone, whether they be vegans or environmentally conscious wine lovers or are simply seeking more transparency when it comes to what they’re drinking.

Frances is a founder of VegFest Puerto Rico, a festival that focuses on creating a community that enjoys a variety of food and products that are vegan-friendly. This nonprofit was established in Puerto Rico in the aftermath of Hurricane Maria. She is also a Vegan Mentor at Catskill Animal Sanctuary and is the Vice President at Misfits Pet Orphanage. In addition, Gonzales has sponsored conferences like the Plant-Based World Expo. She has been vegan for over 20 years and now splits her time between New York and Puerto Rico.

Vegan Wines currently offers 81 different wines from France, Italy, New York, Oregon, and beyond to its 600-plus members. From 2019 to 2020, the club saw 160% sales growth, with a total of 18,414 bottles sold. This year is off to a good start, with January 2021 being Vegan Wines’ highest selling January since the club’s inception. In addition to wine, Vegan Wines offers virtual cooking classes and plant-based cheese. We are focusing on women winemakers and founders in honor of Women’s Month, and we spoke with Frances about her career path, the founding of Vegan Wines, and about vegan wines in general.

World Wine Guys: What was your career path to becoming the founder of Vegan Wines and Despacito Distributors?

Frances Gonzales: Both of my parents were born and raised in Puerto Rico. They met in the Bronx after moving to the states to get jobs. My first language is Spanish and as a first-generation Puerto Rican in New York, our culture is strong. Every summer, they’d send me to Puerto Rico to spend time with my grandparents.

I had always been a picky eater. Even during my childhood, my family would go out of their way to cater to my specific eating habits. As a child during trips to my grandparents’ home, I’d request chicken from the supermarket rather than the one I knew my grandma had just killed to cook for us. Seeing that chicken alive and then on our plates was something I just couldn’t grasp as a child.

When I decided to stop eating meat for good, veganism and vegetarianism weren’t commonly accepted or understood. My immediate food alternatives were rice, beans, and avocado. Even then I had to make sure that no bits of pork were cooked with the beans.

Back in New York, I went to business school in the Empire State Building and decided I wanted to explore the possibility of being my own boss so I could fully support my children outside the welfare system. I started a catering business, was able to secure a small but loyal clientele, and got off welfare.

I love food and I’ve always preferred wine over other alcoholic beverages. When I found out that all wines aren’t necessarily vegan, a passion grew inside of me to find out more. The more I learned, the more I loved wine – the stories, the struggles, the beauty, the history, the taste – it all captivated me. I knew how my life as a vegan and my love for great food and wine all blended together to create my life’s passion.

I had my first child at 18, and I became a vegan a couple of years before my fourth child. The combination of being a single parent, a vegan, and an entrepreneur led me to a life of health, wine, and hospitality.

WWG: Why did you see a need to provide vegan wines directly to consumers and to the hospitality industry?

FG: Even after being vegan for 25 years, I wasn’t aware that all wines weren’t vegan. About six years ago, I became more aware of the hidden ingredients in our beverages, and it made me upset. The idea for Vegan Wines was born in France. While on a wine tasting tour, I heard our guide say the words “egg whites” and I began to ask questions. That was when I learned that animal products are frequently involved in winemaking, particularly during the fertilization and fining processes, meaning the end product isn’t vegan.

I personally drink wine for the taste and ambiance. I associate it with food and pairings, vacation, friends, romantic dinners, and celebrations. How can we enjoy these wonderful moments with wines that are harming animals, the environment, and us? Because of my own struggles finding and selecting wine that was 100% free of animal products, I started Vegan Wines.

WWG: What are some of the most common animal products used in the winemaking process? What are they used for?

FG: At Vegan Wines, we start by examining the soil of a vineyard. Livestock manure and fish emulsion are often used as fertilizers because they are organic and contain the macronutrients like nitrogen, phosphorus, and potassium that plants need. Fish fertilizer is typically used for “foliar” feeding – which means it’s sprayed directly on the leaves – but it can also be added directly to the soil at the base of the plants. Because both are organic, it doesn’t create chemical runoff or easily contaminate nearby water supplies like synthetic alternatives. And by using it, vineyard owners and farmers get to keep their “organic” certification.

Some of the animal ingredients used during the fining process are casein, chitin, egg whites, gelatin, and isinglass (from the swim bladders of fish). Fining is considered important because by encouraging microscopic particles out of the wine, the wine is less likely to become hazy or cloudy after bottling, making it more visually appealing. Fining also removes hydrogen sulfide and bitter flavors. It’s important to note that fining agents do not change the flavor of the wine. They are merely used to improve the stability and clarity of the wine.

WWG: How do non-animal processes or products replicate the use of animal products in vegan winemaking?

FG: The grape-growers and winemakers we work with use “green manure” and cover crops like mustard seeds as fertilizers. Farmers will leave uprooted or sown crop parts to wither on a field so that they serve as mulch.

They also practice methods like allowing the vines to become more naturally independent by allowing the vines to struggle (stressed vines). This encourages the vines to deepen their roots in search of natural resources including water. This is one reason that old, abandoned vineyards in countries like Chile are being rediscovered and producing some amazing wines.

Most young wines, if left long enough under good conditions, will eventually reach the same level of clarity in months by simply using gravity. If winemakers do not want to wait for months, they can use vegan fining ingredients like bentonite clay.

WWG: What are some of the other initiatives you have been part of in order to promote vegan awareness or animal welfare?

FG: Every day I work to promote veganism in any form. Pre-Covid, Vegan Wines and I would join plant-based and other events to promote veganism with our wines. Vegan Wines participated in many festivals and dinners around the nation to tell people our story and partner with members of the food industry, like the James Beard Foundation and Miami Seed Food & Wine Week.

I am also the founder of VegFest Puerto Rico and Vegan Puerto Rico, a Facebook group. I was a mentor for the launch for Catskills Animal Sanctuary mentorship program. I love to collaborate with non-vegan events because I feel I have mastered a way of discussing veganism without scaring people away. It took me years of practice.

WWG: You are a member of Women of the Vine & Spirits. How has this organization helped you in your career? How have you used it to assist or mentor other women in the industry?

FG: I am an Associate Corporate Member of the WOTVS. The founder Deborah Brenner takes personal calls to discuss how her organization can help us achieve our goals. Pre-Covid, I attended their Global Symposium, which led to many supportive connections and insider information that helped me to further my career within the wine industry.

Home Videos The WORLD of WINE – Wine News. Cheap wine, tasting notes and cooking with wine The World of Wine – May 2021 … END_OF_DOCUMENT_TOKEN_TO_BE_REPLACED

How to visit Napa Valley on a Budget. In this video Carson and I explain a few ways to enjoy Napa on the cheap. Tip and advice about how to visit Napa … END_OF_DOCUMENT_TOKEN_TO_BE_REPLACED

Home Videos Get To Know Argentina Wine | Wine Folly If you love Malbec, Argentina is your ultimate wine region. But that’s not … END_OF_DOCUMENT_TOKEN_TO_BE_REPLACED