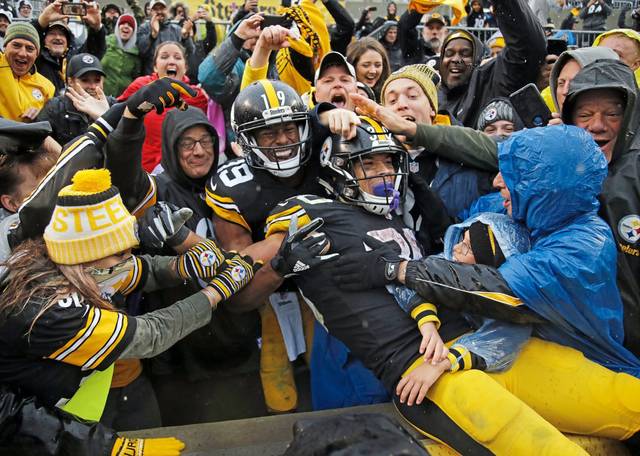 In other words, March is going out like a lion.

Speaking of the Lions, who thinks they may have a better record than the Steelers this year? Anyone?

Nah. Me neither. I just thought I’d drag a few responses out of you for next week before we even started.

We begin with Ryan. He thinks the Pittsburgh sports media is overreacting to Chase Claypool’s bar fight in California.

Steelers fans defending JuJu’s Smith-Schuster’s logo dances in December: “It’s harmless. It’s not like he’s out there getting into bar fights!”

In a recent “Madden-Benz: Unfiltered,” I predicted that the Steelers are on the cusp of taking a major step back and could finish sub-.500 for the first time in the Mike Tomlin era.

So they signed Nick Martin or another Vet center, draft Asante Samuel JR, Entienne falls to their pick in the second, and they draft a OT in the third. You never can predict anything in March.

To be clear, if the 17th game happens, I can’t predict an 8-9 Steelers record. But you can predict all that — to the letter — through the first three rounds of the draft?!

P.S. Nick Martin already signed with the Las Vegas Raiders. So you might want to take a look at your own prognostication skills.

Vic emailed me and was upset that Mark Madden, Dejan Kovacevic and I were so critical of the Steelers’ offseason during last week’s “Final Word” on WPXI.

“Can you tell me the release date of the wine you, Dejan, and Madden are making? I mean it’s obvious after watching last night’s ‘Final Word’ episode, the only thing you three enjoy doing more than harping on the Steelers is making wine.

“Here is the name that will appear on the label: 3 BROTHERS WINE. It’ll have a short description under that name that will say, ‘The best choice for people who love wine and love to WHINE’.

“If you guys are so sure that the window for the Steelers has closed, why talk about them at all?”

Because we already do that with the Pirates, Vic.

By the way, were you making a “wine” pun? Because if so, could you make that more clear? Your rapier-like sense of humor may be too subtle for me.

Shawn didn’t like an observation I made about JuJu Smith-Schuster failing to secure a long-term, big-money deal in free agency.

Please look around the league and see what is happening. Do a minute of research about the one-year deals this off-season. You might actually find a trend and something interesting to write and talk about as a member of the media. Or just keep focusing only on PIT and spin it.

Simmer down, tough guy. You didn’t tell me anything I didn’t know and haven’t already said.

You are making a false equivalency to make yourself feel better about what happened to Smith-Schuster in free agency. And you aren’t even paying attention to what I have been saying for a week now.

So JuJu was somehow smarter to take $8 million and risk injury on a one-year deal as opposed to taking $40 million now? Yeah. What an idiot Golladay is. I wish I could be that dumb.

Dude, stop. The money wasn’t out there for Smith-Schuster. Period. It was for Golladay and Samuel and Davis. You are making it sound like Smith-Schuster intentionally took a cheap version of the franchise tag.

Stop being a honk for JuJu.

Tulio sent me an email. He’s upset with the job Mike Tomlin is doing as head coach.

Forget those bums like Tom Brady, Patrick Mahomes and Peyton Manning. The Steelers should of won every year since their last one!

OK, maybe not the year with Mason Rudolph and “Duck” at quarterback. Maybe.

Tulio, when you get that frothy about saying that Tomlin should have four Super Bowl titles by now, in five trips, that’s when the complaints start to sound silly.

But if your greater gripe is more about postseason success or lack thereof, now I’m with you.

The 2012, 2013 and 2018 teams shouldn’t have missed the playoffs. His last three teams shouldn’t have collapsed the way that they did late in the season. And the first-round losses to the Cleveland Browns, Tim Tebow and Blake Bortles were humiliating in the ways they transpired.

Framing it that way gives you plenty of currency to complain about Tomlin without suggesting that he needs to have as sparkling of a resume as Chuck Noll to be appreciated.

“Please stop telling us about what Pittsburgh sports FANS think and start telling us what is going on with the Steelers, Pirates, Penguins, Panthers. Do some WORK and get us some information on the teams NOT the fans.”

Tim, are you new here?

“U mad, bro?” is a weekly reader response post specifically designed for me to interact with the fans over what they think and the opinions they have. So what else do you expect?

But since you asked, here are some recent examples of me doing “WORK” that has nothing to do with you or any other fans and what they think.

There. We good? It’s always important to me that I leave our commenters happy.

Or … just leave them.

Tim Benz is a Tribune-Review staff writer. You can contact Tim at tbenz@triblive.com or via Twitter. All tweets could be reposted. All emails are subject to publication unless specified otherwise.

Home Videos The WORLD of WINE – Wine News. Cheap wine, tasting notes and cooking with wine The World of Wine – May 2021 … END_OF_DOCUMENT_TOKEN_TO_BE_REPLACED

How to visit Napa Valley on a Budget. In this video Carson and I explain a few ways to enjoy Napa on the cheap. Tip and advice about how to visit Napa … END_OF_DOCUMENT_TOKEN_TO_BE_REPLACED

Home Videos Get To Know Argentina Wine | Wine Folly If you love Malbec, Argentina is your ultimate wine region. But that’s not … END_OF_DOCUMENT_TOKEN_TO_BE_REPLACED