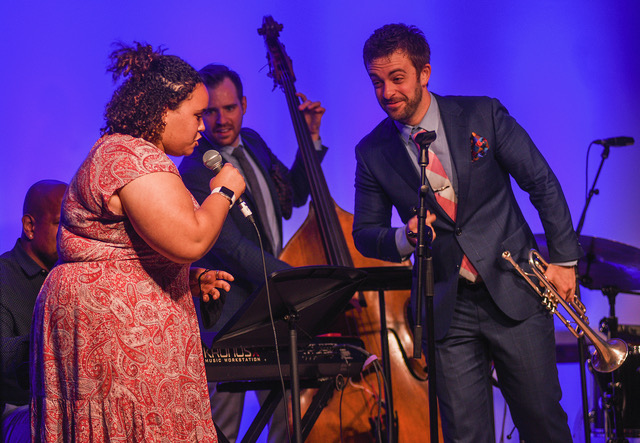 True Blue Jazz started off its ninth year with a bang.

April is Jazz Appreciation Month, so the independent, straight-ahead jazz festival celebrated in style. It hosted a live concert to a sold-out crowd April 29 at Nassau Valley Vineyards with award-winning trumpeter and vocalist Benny Benack III.

As a dual threat, Benack has quickly established himself as one of the most versatile voices of his generation. He was a 2014 finalist in the Thelonious Monk International Jazz Trumpet Competition, and winner of the 2011 Carmine Caruso International Trumpet Competition.  He is highly sought after as a clinician and educator, leading workshops for Lincoln Center’s Jazz for Young People program and the New York Youth Symphony’s Education department.

He readily welcomed allowing the Cape Henlopen High School Jazz Combo to open for him. A rare treat for the kids and the audience ensued as he later asked Cape students to join him on stage for a number. Jacqueline Johnson, Elliot Bastian and Ben Koly got the thrill of their young lives to perform with Benny and the band.

Also April 30, True Blue Jazz was named winner of the 2021 Jazz Presenter of the Year Award by the City of Wilmington and the Clifford Brown Jazz Festival. True Blue Jazz co-founder and Artistic Director Peggy Raley said, “We were truly shocked and grateful to receive such incredible recognition from one of the most respected and revered jazz festivals in the world.” Eddie Sherman, co-founder and president of True Blue Jazz, said, “Their acknowledgment of our presentations and our work with young music students statewide is thrilling.”

May 5, True Blue Jazz kicked off  the First Wednesdays at the Pines series at the Pines restaurant on Baltimore Avenue in downtown Rehoboth Beach. Another sold-out crowd enjoyed the Eric Byrd Trio: Brother Ray Band in celebration of Ray Charles. These monthly events will provide great live jazz at one of Rehoboth’s premier dining locations.

Burkhart said, “Performing at Nassau Valley as the openers for the Benny Benack III show was an awesome experience for the kids. For over a year they didn’t have an opportunity to perform for an audience, so getting to play for a sold-out professional jazz show was amazing. Benny and the band were so supportive, and seeing the kids get on stage and improvise with him made my year. After that show, one of the students told me, ‘I really needed that.’ The next Friday was also fabulous for the kids, parents and teachers involved. NVV was a perfect place for a concert like this, and the students were thrilled to get to play for a crowd and hear their peers from Middletown and Dover. It was incredible to watch students from the three schools play together at a jam session at the end. We are so thankful to True Blue for giving our kids this opportunity.”

True Blue Jazz wishes to thank everyone involved, but most especially Ashton Pools of Rehoboth Beach for sponsoring the first three events. Without the support of Joe and Nicole Ashton, the Jazz Appreciation Month, International Jazz Day and inaugural First Wednesdays at the Pines couldn’t have happened.

For upcoming events including the festival set for Wednesday to Sunday, Oct. 13 to 17, go to truebluejazz.org.

Home Videos The WORLD of WINE – Wine News. Cheap wine, tasting notes and cooking with wine The World of Wine – May 2021 … END_OF_DOCUMENT_TOKEN_TO_BE_REPLACED

How to visit Napa Valley on a Budget. In this video Carson and I explain a few ways to enjoy Napa on the cheap. Tip and advice about how to visit Napa … END_OF_DOCUMENT_TOKEN_TO_BE_REPLACED

Home Videos Get To Know Argentina Wine | Wine Folly If you love Malbec, Argentina is your ultimate wine region. But that’s not … END_OF_DOCUMENT_TOKEN_TO_BE_REPLACED