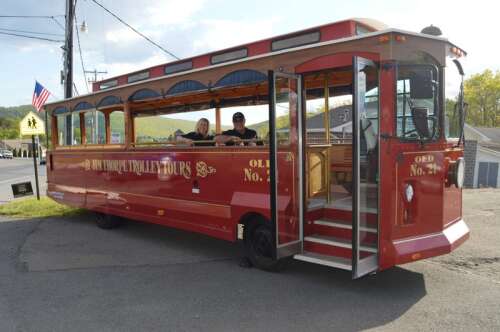 Ed and Lynn Humphreys had an idea a year and a half ago to bring a trolley tour to Jim Thorpe. The couple hopes this June that dream will come to fruition.

The business will start out with two trolleys, one of which will be dedicated to a hop-on hop-off service. Eight one-hour loops will run Friday through Sunday starting at Penn’s Peak with stops including Glen Onoko, the Mauch Chunk Opera House, the Old Jail Museum, the Stabin Museum and Mauch Chunk Lake, among others. On the return trip, a stop in front of the Lehigh Coal and Navigation Building is planned.

“This wild idea of ours has become real,” Ed Humphreys said. “Everyone we talked to loved the idea and we just thought it was something that would be well-received by the tourism community, local residents and Jim Thorpe as a whole.”

The Humphreys purchased the two trolleys, around 12 years old, from a tour company in Asheville, North Carolina, the second of which was set to arrive Friday morning. The trolleys hold around 35 passengers.

“They’re in great shape,” Ed said. “They’ve never seen the northeast weather as they’ve just been operated in Asheville and Savannah, Georgia. It’s got a diesel pusher with plenty of reliable power to get around Jim Thorpe.”

Not all of the stops have been confirmed. Humphreys said he is still looking for a logistical way to add the Jim Thorpe Memorial as one of them.

A website has been set up at www.jimthorpetrolley.com with information on the tours. Adult prices are listed as $18 for a one-day pass and $28 for a two-or-three-day pass. There is also a senior citizen and children’s rate. Tickets will also eventually be available for purchase in Josiah White Park.

“You can hop on or off at any stop, but we reached an agreement with Penn’s Peak where they are going to let people park for free up there,” Ed said. “We’re going to have signs directing people to that parking area. A lot of times people avoid Jim Thorpe because of the parking and congestion and I think this really is going to help with that.”

Ed and Lynn said they also hope local residents, not just tourists, take advantage of the opportunity to ride the trolley.

“I know there are some people, even those who live on the east side of Jim Thorpe, that avoid downtown because of the congestion,” Ed said. “We don’t want to price the local resident out of this. We’re going to have ways for them to utilize this trolley.”

Make no mistake though, the trolley is not a shuttle service, it is a tour. Drivers will be giving historical narration as it makes its way through town.

Humphreys said the plan for the second trolley is to offer a ride to the No. 9 Coal Mine and Museum in the morning from about 10 a.m. to 1 p.m. The No. 9 Coal Mine was first opened in 1855 by the Lehigh Coal and Navigation Company. Visitors can then take a 1,600-foot train ride into the mountain, then walk 600 feet on a guided tour of the oldest continuously operated deep anthracite coal mine in the world. The “Coal Cracker” trolley tour is listed at $30.

In the afternoon, that trolley would switch gears and take guests on a wine tasting tour to three local wineries. That tour is listed at $55.

“The winery tour will go to vineyards,” Ed said. “People don’t need us to go the wineries in town.”

Jim Thorpe Borough officials said last week they are on board with the plan.

“I think it’s an awesome idea and something that is desperately needed in Jim Thorpe,” Mayor Michael Sofranko said. “I like the fact of taking them to Penn’s Peak as it does eliminate some of that parking problem throughout the borough. It’s also nice that the local residents will have a chance to jump on.”

Lynn Humphreys, left, and her husband, Ed, sit aboard one of two trolley cars they recently purchased from a company in North Carolina. The couple plans to begin running Jim Thorpe Trolley Tours in June with a hop-on hop-off tour, a Coal Cracker mine tour and a wine tasting tour. JARRAD HEDES/TIMES NEWS

Lynn Humphreys, left, and her husband, Ed, sit aboard one of two trolley cars they recently purchased from a company in North Carolina. The couple plans to begin running Jim Thorpe Trolley Tours in June with a hop-on hop-off tour, a Coal Cracker mine tour and a wine tasting tour. JARRAD HEDES/TIMES NEWS

Home Videos The WORLD of WINE – Wine News. Cheap wine, tasting notes and cooking with wine The World of Wine – May 2021 … END_OF_DOCUMENT_TOKEN_TO_BE_REPLACED

How to visit Napa Valley on a Budget. In this video Carson and I explain a few ways to enjoy Napa on the cheap. Tip and advice about how to visit Napa … END_OF_DOCUMENT_TOKEN_TO_BE_REPLACED

Home Videos Get To Know Argentina Wine | Wine Folly If you love Malbec, Argentina is your ultimate wine region. But that’s not … END_OF_DOCUMENT_TOKEN_TO_BE_REPLACED