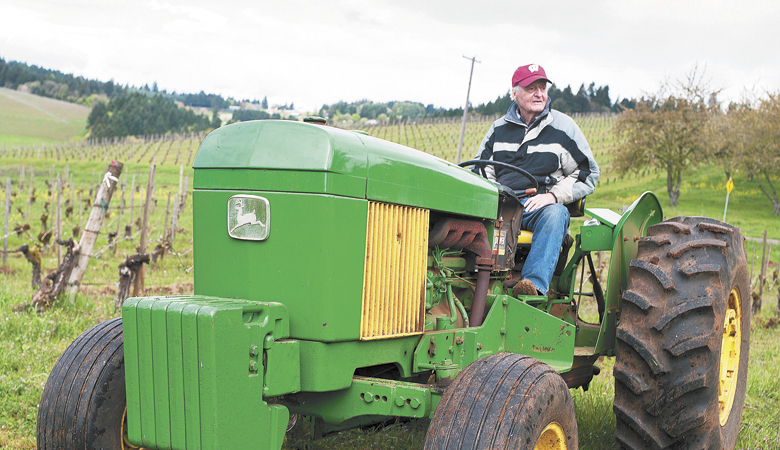 A fond farewell to a Dundee Hills original

Dundee Hills resident Jim Maresh, one of the Willamette Valley’s first grape growers, died March 7.  A devoted family man who loved to dance to jazz with his beloved wife, Loie, and drove a tractor into his 90s, Jim’s passing left an empty spot in the hearts of his longtime friends, the self-proclaimed Geezers, aka the Geezers Grapegrowers Group.

In 1969, Dick Erath drove up Jim Maresh’s Dundee Hills driveway in an old, beat-up BMW. He was a formidable-looking guy; Jim wasn’t sure he was going to let him in. “I’ve looked all over the West Coast for a great viticulture site, and I think you’re sitting on it,” Dick told Jim.

“Well, I’ve tried everything else,” said Jim, who at the time was farming cherries, prunes and walnuts. “Let’s build a greenhouse on your property and propagate cuttings,” suggested Dick.

And so they did — the only other Yamhill County vineyard at the time belonged to David and Diana Lett of The Eyrie Vineyards. The Maresh Red Barn Tasting Room (now Arterberry-Maresh) and Erath (originally Knudsen-Erath) operated on neighboring vineyard slopes for 45 years on Worden Hill Road.

The chance meeting marked the beginning of a lifelong friendship that endured into retirement, when the two met monthly with other retired growers for the Geezer meetings … until the passing of Jim, when the group lost their patriarch.

Industry luminaries loomed large in my young life, and Jim Maresh’s stories radiated throughout the decades and continued around the Geezers’ lunch table.

Jim treasured his native state’s University of Wisconsin Badgers almost as much as he enjoyed telling stories about the nascent Oregon wine industry — like planting the first vine on Worden Hill Road and then waking up one day to realize it had been stolen — but he would never schedule a meeting when his team was playing.

Vivian recalled many neighborhood milestones in the Maresh driveway, recounting how she and her husband, Arthur, had driven around for hours looking for David Lett’s house and had been directed by the gas station attendant to the Maresh house instead.

Jim was always there, the ambassador of the Dundee Hills for new acquaintances and friends of 50 years. Jim and Loie were the backbone of the Red Hills community, often hosting legendary barn potlucks after harvest in the early years, followed by neighborhood weddings, funerals and celebrations.

As a child in the early ’70s, I stood in our fledgling vineyard that we had purchased from Jim. I watered the cuttings from David Lett, Charles Coury and Dick Erath. At the time, Dundee was a town of 400 people and — unimaginable today — a speed trap.

A few years later, I walked into our house at the vineyard after summer camp wondering where my parents were and instead found a front-page News-Register article showing our family granary in flames. I burst into tears. At the door, Jim and Loie magically appeared to console me with Loie’s famous cherry pie and beloved Springer Spaniels. Meanwhile, my parents soldiered themselves to face the smoldering embers.

Jim looked down at me astride his John Deere tractor when I was researching the May 2015 Oregon Wine Press cover story.

“What kind of tractor is your favorite, Jim?” I asked him.

I dedicated my first book, “Vineyard Memoirs” to Jim and Loie, who encouraged me to write the stories of our early grapegrowing endeavors and industry collaborations.

It’s comforting to know the family will continue driving the John Deere, operating the Red Barn and carrying on a legacy of a life well spent. And, undoubtedly, keeping in touch with the Geezers.

Home Videos The WORLD of WINE – Wine News. Cheap wine, tasting notes and cooking with wine The World of Wine – May 2021 … END_OF_DOCUMENT_TOKEN_TO_BE_REPLACED

How to visit Napa Valley on a Budget. In this video Carson and I explain a few ways to enjoy Napa on the cheap. Tip and advice about how to visit Napa … END_OF_DOCUMENT_TOKEN_TO_BE_REPLACED

Home Videos Get To Know Argentina Wine | Wine Folly If you love Malbec, Argentina is your ultimate wine region. But that’s not … END_OF_DOCUMENT_TOKEN_TO_BE_REPLACED