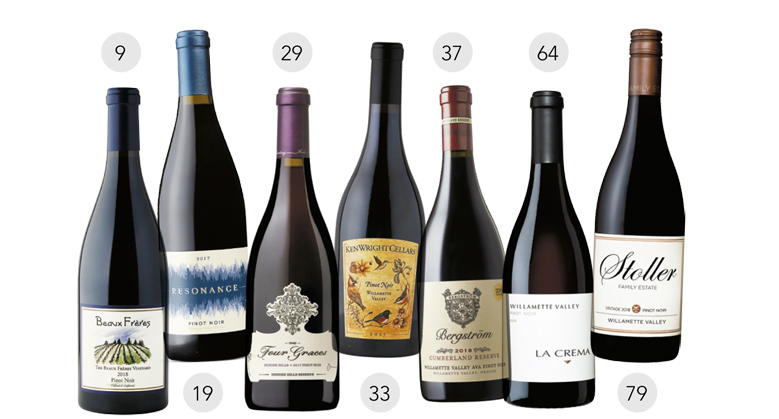 Smell that damp, forest floor earthiness,” Tim Jones, winemaker at The Four Graces near Newberg, pointed to vineyard rows next to a stand of Douglas firs. “You get a sense of that very subtle aromatic in the Dundee Hills all around here.” This keen sense of terroir and emphasis on site influence distinguish Jones and the other winemakers who collectively earned Oregon a best-ever seven spots on the 2020 edition of Wine Spectator’s “Top 100 Wines.” Add three brands from Washington, and the Northwest accounts for 10% of the world’s most highly regarded wines of last year.

A “Scents” of Terroir

“Most people will pick up on the [upfront] aromatics: cherry, raspberry, wild strawberry, violets and other floral aromatics,” Jones at The Four Graces said about his winning Pinot. But he’s visibly more excited by the forest, earth aromas adding their flair. “I want to explore more all the things the environment brings to wine,” he said. “Depending on site, everything is vastly unique. I’d like to delve into that deeper and understand it.”

One special project for the father-son team has been overseeing two blocks of a Burgundy vineyard. For two years, the Etzels have shaped the vineyard into prime configuration. First vintage will be Beaux Frères de Bourgogne 2020, to be bottled in September and released in 2022. Meanwhile, hats off to its Oregon Ribbon Ridge-grown Pinot Noir as Wine Spectator’s 9th best wine in the world.

Success comes in many configurations. California-based La Crema is known for diligently seeking cool-climate sites on the West Coast to produce expressive Pinot Noir and Chardonnay. Leading the way is head winemaker Craig McAllister and Samantha “Sam” Poehlman, who oversee efforts at the winery in McMinnville. They make up the talent behind La Crema’s “Top 100” Pinot, a blend of fruit from five estate vineyards in the northern Willamette Valley. The blend represented from these sites combines in an elegant, nuanced expression to highlight the characteristics of cool-climate Pinot. “We wanted each vineyard to shine,” said McAllister.

Guillaume Large happily points out that coming to Oregon four years ago from his native France to work at Résonance Wines near Carlton was a perfect transition from his native Burgundy. “The latitude is almost the same, and the small towns in the Willamette Valley remind me a lot of where I lived,” he said. Upon arriving, the winemaker promptly began crafting his “Top 100” wine. “It’s a blend, half from estate fruit and half from partner vineyards that best expresses the intricacies and complexities of the fruit grown in the Valley,” he explained. “I think we are in one of the best spots in the world for growing and making Pinot Noir and Chardonnay. For a young region like this, it’s very promising.”

Ben Howe, director of winemaking at Stoller Family Estate in Dayton, says the key to success for his winning Pinot was a focus on fruit. “There was a touch of oak to give some complexity, but the barrels were pretty neutral,” he explained. “Fruit came from 10 vineyards that were a mix of estate and partners.”

The resulting blend tastes masterful. Fruit from the Yamhill-Carlton AVA “gave us warm, rich flavors, very juicy and luscious.” Grapes from the volcanic soiled Eola-Amity Hills AVA were “acid-driven and blue fruited.” And the Dundee Hills offered “spice and earthy qualities. This is a showcase wine for Stoller” Howe continued. “We’ll use it to get exposure in places we’ve never been.”

Portland native Josh Bergström of Bergström Wines has been at the helm of his family enterprise for 21 years. “My parents originally wanted to grow Lingonberries, but we decided on wine grapes instead,” he noted with a smile. This is his third “Top 100” listing. “We knew potential for greatness was there, [as] 2018 was an ideal year. We were able to pick fruit at the right time and at the right pace.” His Cumberland Reserve is a blend of five vineyards on Ribbon Ridge. “There’s a lot of fresh fruit character, not jammy, but with great brightness and crunch. And there’s a good deal of spiciness coming from the soils rather than the barrels.”

Ken Wright of Ken Wright Cellars has been coaxing wine in the Willamette Valley for 34 years, notably Pinot Noir and Chardonnay. He works closely with 13 vineyards, as he has for three decades. He’s on Wine Spectator’s list of the top 100 wines, again — his fourth showing. This year’s is particularly special for the steamy 2017 vintage, one of the hottest on record, unlike the ideal 2018.

“Because of the extreme heat, it was critical to do everything to extend the hang time of the fruit,” Wright explained. “In heat, Pinot Noir tends to race to high sugar levels. It’s one of the fastest ripening varieties and that’s why it does so poorly in warm climates. Because it hasn’t been on the vine long enough, the wine lacks complexity. You end up with a bludgeoning wine that has no detail, no complexity, just a hammer.” Wright sidestepped all those pitfalls, as did the other winemakers who made the list with 2017s.

No matter the vintage, the wines on the coveted list signal how greatness continues to build in Oregon. Congratulations and cheers to the list-makers.

A word to the wise: This popular and widely respected list of best wines in the world is immediately pounced on by professional buyers and avid individual enthusiasts. Wineries having small productions might well run out before you get a chance to nab a bottle or two of their top 100 selections. No matter. Just ask the winemaker to suggest some comparable wines. You may be delighted with the result.

Home Videos The WORLD of WINE – Wine News. Cheap wine, tasting notes and cooking with wine The World of Wine – May 2021 … END_OF_DOCUMENT_TOKEN_TO_BE_REPLACED

How to visit Napa Valley on a Budget. In this video Carson and I explain a few ways to enjoy Napa on the cheap. Tip and advice about how to visit Napa … END_OF_DOCUMENT_TOKEN_TO_BE_REPLACED

Home Videos Get To Know Argentina Wine | Wine Folly If you love Malbec, Argentina is your ultimate wine region. But that’s not … END_OF_DOCUMENT_TOKEN_TO_BE_REPLACED