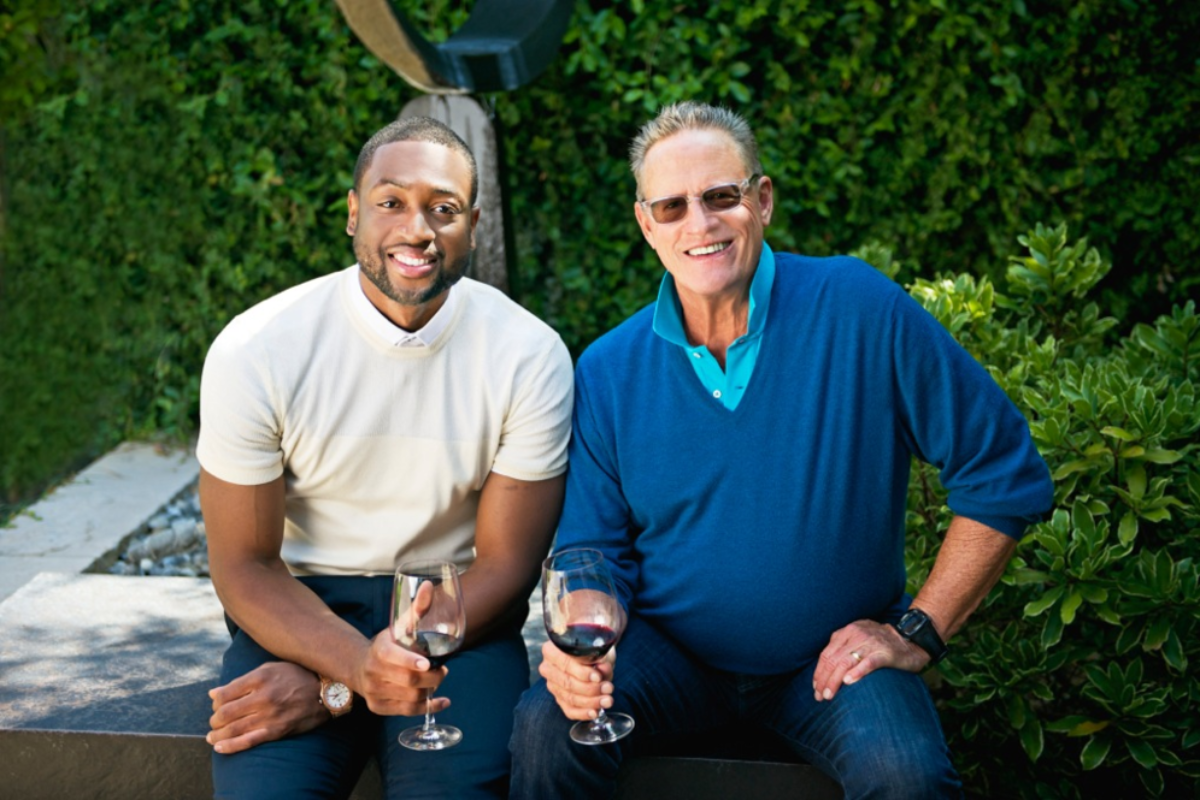 Celebrating Black History Month, Central Market is raising the profile on important Black winemakers across the globe by introducing their high-quality wines in store and offering them at reduced prices through March 5. On a recent morning, the luxe grocer’s head of beer and wine Keith Janosik shared insights on eight of the winemakers with a small group of media.

“What I’m really excited about is that we are showcasing the first Black owned wineries in South Africa and the first Black-owned estate winery in Napa Valley, which is Brown,” Janosik says. “Our focus has always been quality and the unique character of these wines and the amazing story behind them.

“And this is not an in and out program, we are in this long term.”

Former NBA champion Dwyane Wade, who spent most of his career as a guard for the Miami Heat, eased into the good life on retirement. He embraced his growing appreciation of fine wine, much of it honed through his friendship with renowned California winemaker Jayson Pahlmeyer.

Pahlmeyer invited Wade to witness the magical Napa Valley harvest in 2014, an invitation that sparked the former Finals MVP’s imagination. Thanks to the combination of the harvest trip with Pahlmeyer’s wine business knowledge and Wade’s enthusiasm and joie de vivre, Wade Cellars was born.

“Since the first vintage in 2012, the production range has expanded to a diverse collection of wines,” Janosik says, “that are inspired by California’s rich winemaking tradition and a health dose of DWade style.”

From his start making wine in the family garage with his wife, Debra, Phil Long has advanced his brand to such renown that the wines have been featured on programs such as Big Little Lies and Big Bang Theory. In one episode of Big Little Lies, Reese Witherspoon actually talks about how much she likes Longevity’s chardonnay.

Long, considered a rising star in the world of wine, and his wife founded Longevity in 2008. He created the heart-shaped label in honor of Debra, who died of pancreatic cancer in 2019.

The only major store to carry the label at present, Central Market is spotlighting Longevity’s chardonnay and cabernet sauvignon.

Stark-Conde‘s Field Blend and Kara-Tara’s pinot noir are also being featured during Black History Month. The latter is a joint venture between Stark-Conde’s José Conde and Black winemaker Rüdger van Wyk, who spent two years at Stark-Condé as an intern and assistant winemaker. In 2018, van Wyk became head winemaker at Kara-Tara and was subsequently named Young Winemaker of the Year by Diner’s Club.

According to the winery’s website, 20 years ago Lievland was considered one of South Africa’s leading estates. In late 2017,  José Conde and Tyrrel Myburgh purchased the property with the intent of returning it to its former glory.

Mahalia Kotjane is an assistant winemaker at Lievland Vineyards. The mother of two studied winemaking at Elsenburg Agricultural College, was a protégé in the Nedbank Cape Winemakers Guild, and participated in a Burgundy, France wine exchange program.

Founder Berene Sauls’ journey from her underprivileged background to founding a winery began as an au pair at Hamilton Russell Vineyards where she soon graduated to an administrative position ultimately handling wine exports and labeling. Fifteen years later, she launched her own operation that today is highly regarded for its chardonnay and pinot noir. This is the first Black-owned vineyard in South Africa.

Saul named the wine after the historic rural hamlet where she was born and where her ancestors lived as freed slaves on land bequeathed to them in 1810 by East India Company settler Johannes Tesselaarsdal.

Central Market’s presentation of the Tesselaarsdal chardonnay and pinot noir particularly captured our attention thanks to Janosik’s evaluation of both.

The only Black-owned winery in Napa Valley, the Brown Estate label established in 1996, is headed by a family trio of African Americans: president Deneen Brown, winegrower David Brown, and director of winemaking for House of Brown Coral Brown. Originally, their parents, who bought the land in 1980, grew viniferous grapes for sale to winemakers. But in 1995, the children decided to start making their own wines. The Browns debuted their first three vintages in 2000 and in 2017 the family opened the Brown Downtown Tasting Room on First Street in Napa.

Their stable of wines includes House of Brown, with wine produced entirely by Black women as a salute to all women of color.

Grammy Award winner Mary J. Blige says that she has loved white wine, pinot grigio in particular, as long as she’s been of drinking age. So when Italian winemaker Marco Fantinel of Fantinel Winery asked if she would like to create her own wine, the answer was a resounding yes.

As she’s quoted on the Sun Goddess website: “Wine tasting is one of my passions. Wine is culture. Wine is community. Wine is lifestyle. Wine is emotion.”

The singer, songwriter and producer traveled to Italy studied the terroir, the climate, and the process of wine-making and impressed Fantinel with her enthusiasm for the project. In the end, her label was born.

Home Videos The WORLD of WINE – Wine News. Cheap wine, tasting notes and cooking with wine The World of Wine – May 2021 … END_OF_DOCUMENT_TOKEN_TO_BE_REPLACED

How to visit Napa Valley on a Budget. In this video Carson and I explain a few ways to enjoy Napa on the cheap. Tip and advice about how to visit Napa … END_OF_DOCUMENT_TOKEN_TO_BE_REPLACED

Home Videos Get To Know Argentina Wine | Wine Folly If you love Malbec, Argentina is your ultimate wine region. But that’s not … END_OF_DOCUMENT_TOKEN_TO_BE_REPLACED