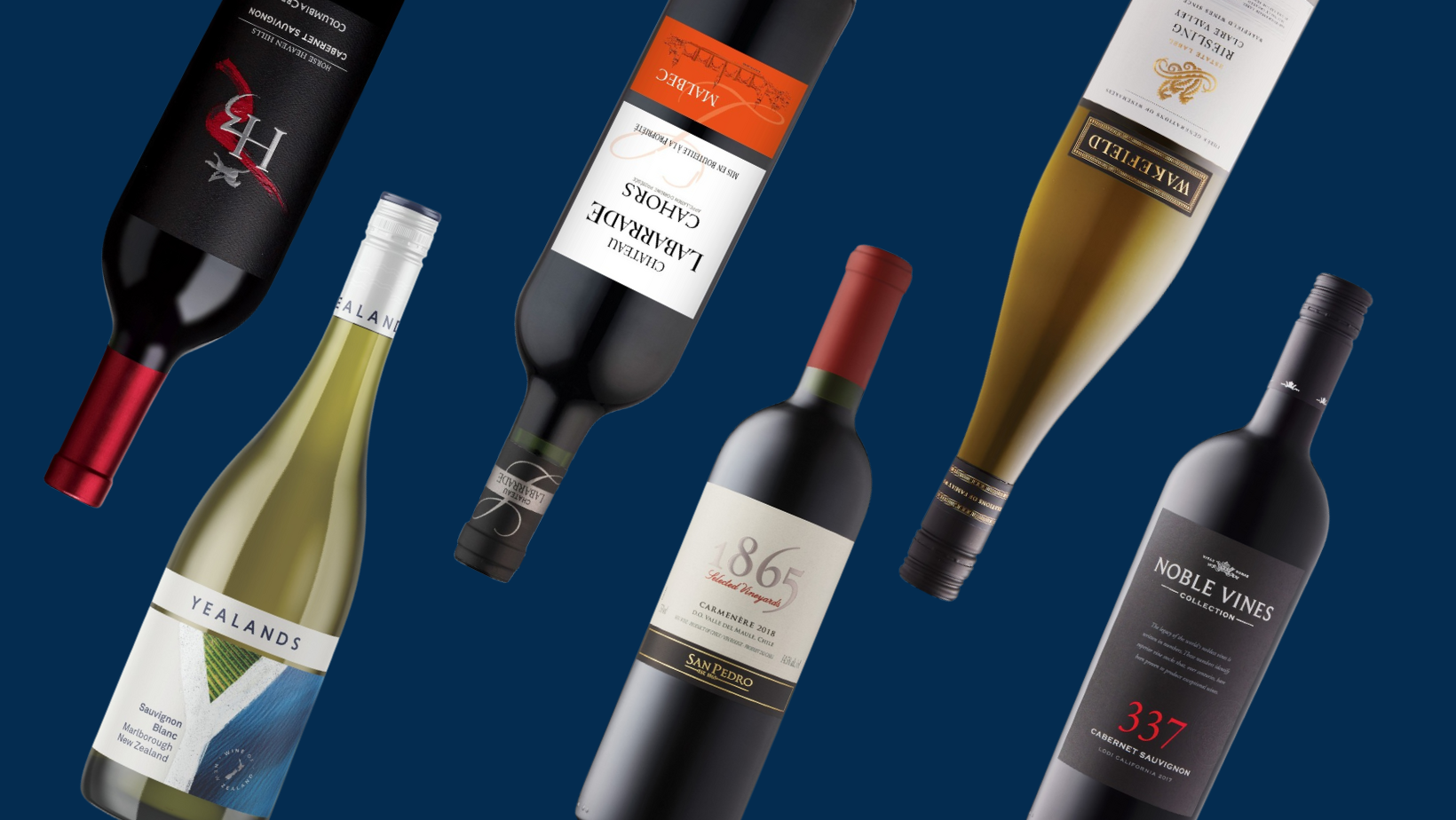 Now more than ever we are looking to pour a glass of wine and be taken around the world. With our sense of smell and taste we can open up wines, travel the world, give back as well as learn and experiment with some new favourite wines. Experiencing culture through food and drink can remind us to stay positive and hope for our travelling days to come. I rounded up 6 wines to get you started as you open your liquid passport and see the world!

Take a trip to California and give back locally! Noble Vines, a family-owned winery in California has partnered with Parkdale Community Food Bank on this vintage release and is donating $1.00 per bottle sold to this initiative!

The numbers on this label – 337 – indicates the number of the noble Cabernet vine stock. This numbers identify superior vine stocks that produce unique wines with delicious taste profiles and the Cabernet Sauvignon 337 vine stock originated at some of the great châteauxs of Bordeaux, France and has a noble reputation!

The fruit for this wine comes from the coveted Lodi wine region in northern California.Grapes for this wine were harvested at night (saving energy) and aged in both French and American Oak. Some of this wine is also aged in stainless steel lifting the fruit aromas and profile of the wine complementing the structure and boldness of the rest of the wine.

Noble Vines are founding members of the Central Coast Natural Vineyard Team and adhere strictly to appellation-specific rules for sustainable farming each of our vineyards to ensure this land endures for the next century and beyond.

With notes of black cherry , black peppercorns, and notes of black fruit and clove this wine is smooth with lingering finish and pairs perfectly with beef short ribs or a juicy burger.

On the edge of South America west of the Andes mountains lies the wonderful wines of Vina San Pedro. The grape named Carménère disappeared from European vineyards during the middle of the 19th century – But you can now find the 1865 Selected Vineyards Carménère from Chile in the LCBO for a very limited time.

Taste the unexpected from the most narrowest country in the world! Head to South America and taste the superstar grape of Chile – Carménère.

Pronounced “car-men-nair” the grape hails from the old world, it came to Chile and was mistaken as Merlot until 1994, this grape has blossomed into fame and fortune and Chile has taken it and made it their own star.

With notes of spiced blackberry and plum, gorgeous hints of black pepper and tobacco, and finished off with soft and delicate tannins – this wine is supple, elegant and delicious!

1865 Selected Vineyards is the year Viña San Pedro was founded. The 1865 Carménère is a perfect discovery bottle as we head into spring temperatures and there is only a small release of it at the LCBO – so you better get your hands on it fast!

Have you ever been to Seattle? It may be a rainy city, but jump in a car and head east past two mountain ranges – the Olympics and the Cascades and you’ll find beautiful Washington State Wine Country. Perfectly located at 46 degrees Washington is a ‘Wild West’ of a wine country.

The warm sun shines over 300 days a year and grapevines thrive in volcanic soils, with 6-8 inches of rain with some of the most dramatic daily temperature fluctuations, helping to craft bold, unique and dramatic wines.

With over 70 grape  varieties grown, wines are hand-crafted by ambitious, talented winemakers who bring out the purest of terroir, and show a balance of authentic fruit expressions to deliver perfection in your glass.

Washington specializes in Riesling, Merlot, Chardonnay, Cabernet, and Syrah Blends. So go out and try something new!

Malbec was originally grown in Bordeaux, France in a place called Cahors, and it is still the primary red wine grape there today! Bet you didn’t know that! Your love for Malbec can be transitioned into an old world love affair with this wine. Yearning to dive into a history lesson and drink great wine at the same time! This is it!

Pont Valentré (Valentré Bridge) the image that is on the front label of Château Labarrade – is one of the most beautiful fortified Medieval bridges in France today. The town of Cahors is situated on a large peninsular-like area formed by a u-shaped bend in the Lot River in the Midi-Pyrénées of the Occitanie Region. Thus strategically surrounded and protected by the river on three sides. During the golden age of Medieval Cahors a fortified bridge was built on the western side of the town. Originally the bridge was protected on both side with substantial gateways. Only the barbican on the eastern, city end of the bridge has survived.

One of New Zealand’s most sustainable vineyards. Yealands was the first winery in the world to be carbonzero certified from inception. The winery has one of the largest solar panel installations in NZ as well as three wind turbines and Yealands Wines Marlborough Sustainability Initiative makes available $100,000 every year for local environmental projects. Vineyards are so close to the ocean they are often misted with sea spray. Chief Winemaker Natalie Christensen was named one of the worlds most influential women in wine.

Head to Clare Valley, Australia to taste Wakefield Wines. One of the most awarded wineries in the world, their estate wines are truly quite brilliant. This Riesling is just divine! Clare Valley is one of Australia’s oldest wine-producing regions and described as one of the prettiest in Australia, with rolling hills and sweeping gullies it has a winemaking history spanning more than 150 years! A very charming wine corner of Australia with only 40 family-owned wineries. Clare Valley has 11 recognized soil types, ranging from terra rossa (swipe to see the colour in the photo) red topsoil over limestone to broken slate, Sandy loams and degraded quartz. Handcrafted by the Taylor family and with three generations of winemaking experiences, they have passed down secrets to crafting beautifully-balanced wines and this Riesling will impress!

Home Videos The WORLD of WINE – Wine News. Cheap wine, tasting notes and cooking with wine The World of Wine – May 2021 … END_OF_DOCUMENT_TOKEN_TO_BE_REPLACED

How to visit Napa Valley on a Budget. In this video Carson and I explain a few ways to enjoy Napa on the cheap. Tip and advice about how to visit Napa … END_OF_DOCUMENT_TOKEN_TO_BE_REPLACED

Home Videos Get To Know Argentina Wine | Wine Folly If you love Malbec, Argentina is your ultimate wine region. But that’s not … END_OF_DOCUMENT_TOKEN_TO_BE_REPLACED