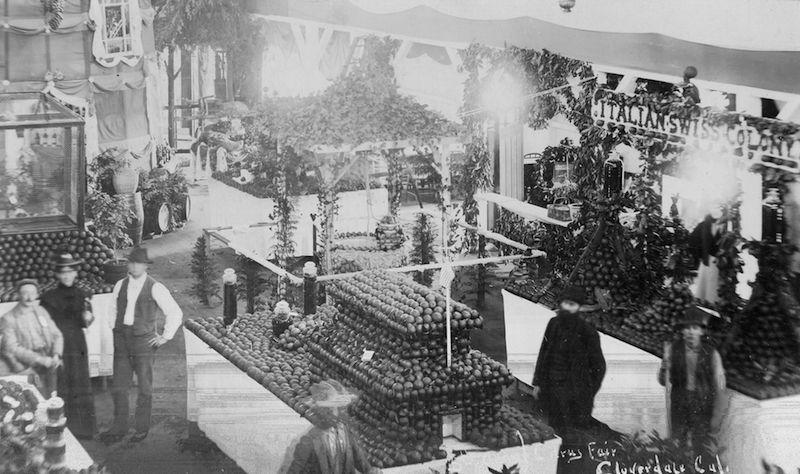 Booster buttons for the Citrus Fair have arrived. The colored buttons sport a cluster of oranges and the date of the Fair.

Ben T. Dillon, the comedian, will be at Humbert’s Opera House next Thursday evening. Mr. Dillon will present “The Irish Prince.” Down in Poterville audiences thought Ben T. Dillon was the funniest man that ever came to town. “The Irish Prince” is a conglomeration of jokes and amusing situations.

Household Hint: To revive a dying fire, scatter on the embers a spoonful or two of granulated sugar. Radiators will not be so conspicuous if enameled in a color to match the wallpaper.

First steps toward forming a local chapter of the California Teachers Association have been taken by Cloverdale High School and elementary teachers.

Winery shipments of California wines into distribution channels totaled 10,069,120 gallons in November 1959. This was 8.2 per cent increase over wine shipped in November 1958

Chevrolet has begun production of a new two-door coupe for it Corvair line.

The lighting project for Cloverdale High School’s athletic field has been approved by the State Commissioner of Corporations. Bids can now be called for purchase of the lights and their installation.

Ultrapower Inc. has decided they will not build their 11.4 megawatts wood-burning power plant in downtown Cloverdale. The alternative energy power company tried for nearly a year to get permission to build a $21 million plant on Railroad Avenue.  Ultrapower was met with resistance by area residents who feared air, noise and land pollution.

Note: These three businesses, owned by the same proprietor, moved into the building with the towers next to Eagle Tech.

Home Videos The WORLD of WINE – Wine News. Cheap wine, tasting notes and cooking with wine The World of Wine – May 2021 … END_OF_DOCUMENT_TOKEN_TO_BE_REPLACED

How to visit Napa Valley on a Budget. In this video Carson and I explain a few ways to enjoy Napa on the cheap. Tip and advice about how to visit Napa … END_OF_DOCUMENT_TOKEN_TO_BE_REPLACED

Home Videos Get To Know Argentina Wine | Wine Folly If you love Malbec, Argentina is your ultimate wine region. But that’s not … END_OF_DOCUMENT_TOKEN_TO_BE_REPLACED