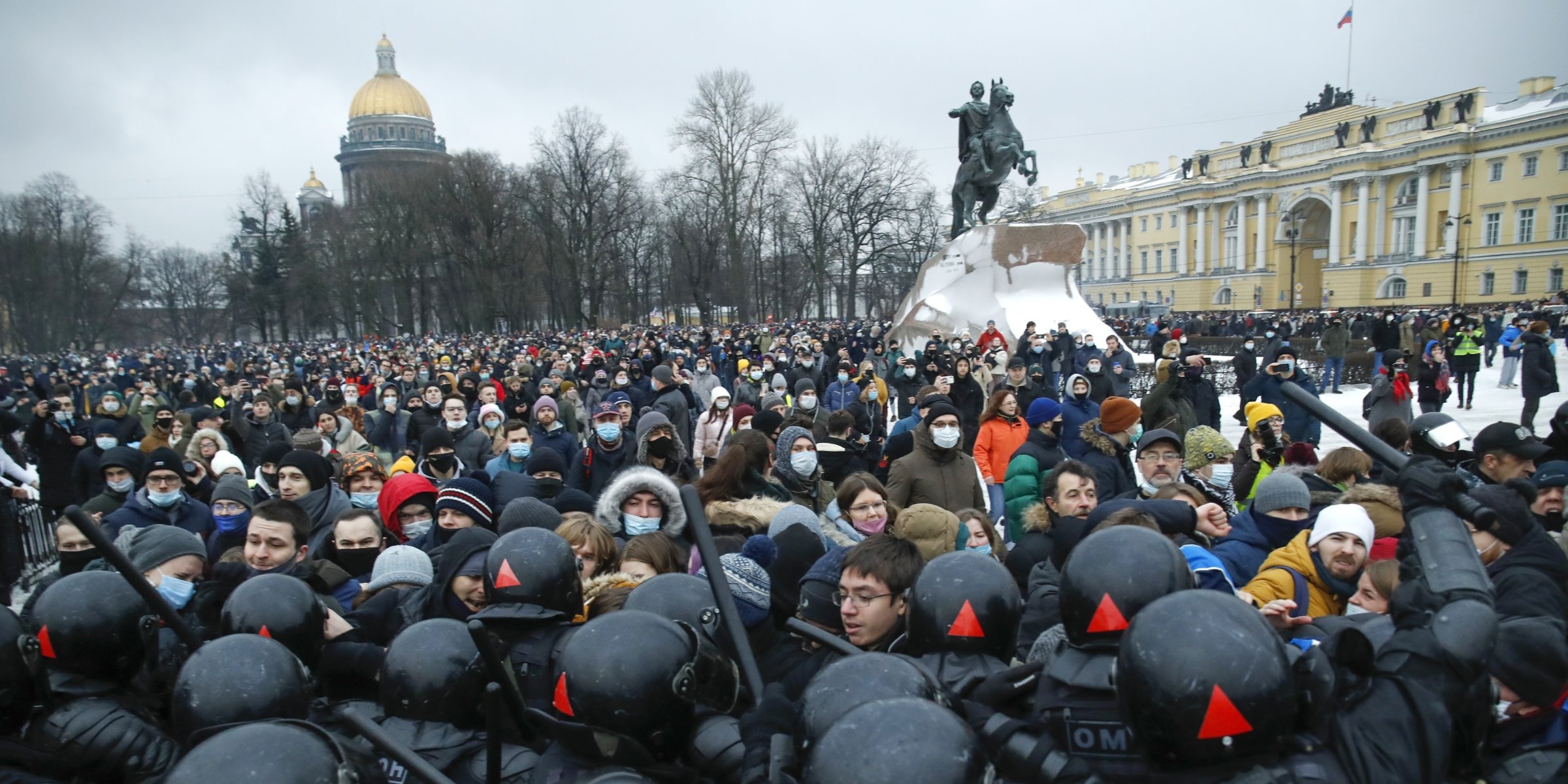 Russian police detained thousands of protesters on Sunday as activists took to the streets across the country demanding the release of jailed Kremlin critic Alexei Navalny.

Despite authorities ramping up pressure on the opposition with arrests and criminal probes, Navalny aides have called for new nationwide demonstrations ahead of the opposition leader’s trial set to start on Feb. 2.

The first protests took place in the Far East, including the port city of Vladivostok where several dozen protesters gathered in the city’s central square despite police closing it off ahead of the rally.

“The desire to live in a free country is stronger than the fear of being detained,” 25-year-old student Andrei, who preferred not to give his last name, told Agence France-Presse (AFP).

AFP footage from Vladivostok showed dozens of protesters escaping the police on the frozen waters of the Amur Bay and circle dancing.

In an unprecedented move, police in the capital announced the closure of seven metro stations and said movement of pedestrians would be limited in the city center.

Police detained 44-year-old Navalny at a Moscow airport on Jan. 17 as he arrived from Germany, where he had been recovering from exposure to a Soviet-designed nerve toxin.

A makeshift court at a police station ordered the anti-graft campaigner to be taken into custody until his trial on charges of violating the terms of a 2014 suspended sentence.

The Moscow rally is due to take place outside the headquarters of the Federal Security Service, Russia’s main security agency, which Navalny says carried out the near-fatal poisoning attack on the orders of Russian President Vladimir Putin.

“The majority is on our side. Let’s wake them up,” Navalny said on Thursday in a message from Moscow’s Matrosskaya Tishina, a high-security detention center.

Tens of thousands of Russians took to the streets of over 100 cities across the country last Saturday to protest Putin’s 20-year-rule.

More than 4,000 demonstrators were detained, while authorities launched a series of criminal probes.

The country’s media watchdog said Friday it summoned representatives of several social networks, including Facebook and TikTok, for failing to comply.

This week several Navalny associates, including lawyer Lyubov Sobol and his brother Oleg, have been placed under house arrest until late March pending charges for violating coronavirus restrictions by calling people to join protests.

Navalny’s spokesperson, Kira Yarmysh, was detained late Saturday also over violating virus measures, the same day she was due to walk free after a nine-day jail term for violating protest laws.

The head of Navalny’s Anti-Corruption Foundation, Ivan Zhdanov, said Saturday the Investigative Committee informed him that a criminal case on fraud charges had been launched against Navalny.

In December last year, investigators said they were initiating a probe into Navalny allegedly misappropriating over $4 million of donations to his organizations.

Days after Navalny was taken into custody, his team released a video report alleging Putin had been gifted a $1.35 billion property on the Black Sea coast, garnering over 100 million views on YouTube.

The Kremlin has denied that the Russian president owns the opulent complex, which according to Navalny features an underground ice hockey arena, a private casino and vineyards.

State television on Friday sought to rebut opposition claims the Black Sea property was a luxurious palace by airing footage of it under construction.

Billionaire Arkady Rotenberg – Putin’s former judo partner who is under Western sanctions – said Saturday he was the owner of the property and that he was building a hotel there.

Home Videos The WORLD of WINE – Wine News. Cheap wine, tasting notes and cooking with wine The World of Wine – May 2021 … END_OF_DOCUMENT_TOKEN_TO_BE_REPLACED

How to visit Napa Valley on a Budget. In this video Carson and I explain a few ways to enjoy Napa on the cheap. Tip and advice about how to visit Napa … END_OF_DOCUMENT_TOKEN_TO_BE_REPLACED

Home Videos Get To Know Argentina Wine | Wine Folly If you love Malbec, Argentina is your ultimate wine region. But that’s not … END_OF_DOCUMENT_TOKEN_TO_BE_REPLACED