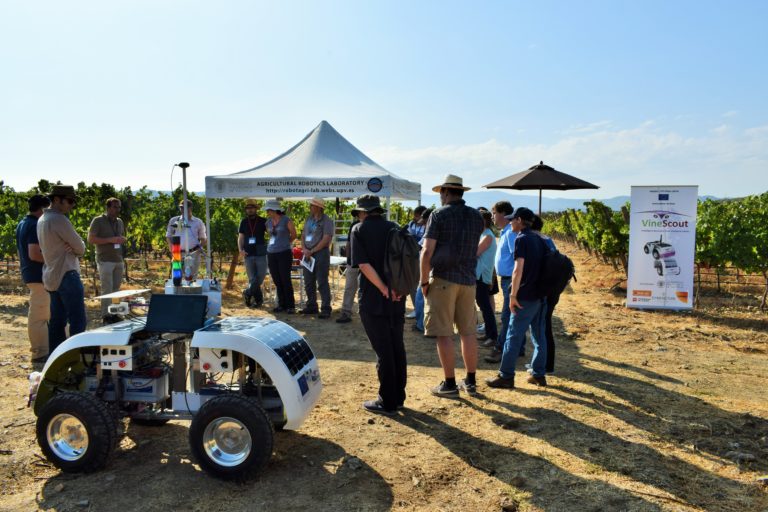 The world of viticulture now has an ally that can give revolutionary results. Researchers from the Polytechnic of Valencia have developed VineScout, an autonomous robot equipped with sensors and artificial vision that estimates the water needs and other parameters of the vine. With their help, the winegrower can optimize irrigation and plan the harvest more efficiently.

The viticulture of the future is becoming a reality thanks to robotics, big data and artificial intelligence. Researchers from the Polytechnic University of Valencia (UPV) have developed a new agricultural robot that, through different radiometric, spectral and ultrasound environmental sensors, allows the state of the vine to be recorded at all times.

It is the first fully electric viticultural observation robot, with autonomy for at least two days. His name: VineScout, the fruit of seven years of work.

In a totally autonomous way, measures key parameters of the vineyard to estimate its water needs, vegetative development or anticipate the variation in the degree of maturity within the same plot.

“VineScout can monitor the vineyard as many times as the farmer needs, helping him to make a more rational use of water and, in general, to know the state of the vineyard through objective indicators, such as differences in plant vigor or properties of the fruits within of the same plot & rdquor ;, explains Francisco Rovira, director of the Laboratory of Agricultural Robotics (ARL) of the UPV, “helping to harvest, fertilize or irrigate in a more efficient way & rdquor ;.

The robot collects each data on the ground, less than one meter from the vines (without touching the crop at any time). This translates into obtaining highly reliable and accurate information, since each point is recorded with its GPS positioning, indicating the time and place where each measurement was made.

“It is capable of registering around 12,000 points per hour, each point with 30 data, compared to traditional manual sampling, which barely reaches 40 measurements per hour, which gives an idea of ​​how much this robot can facilitate their work for winegrowers & rdquor ;, points out Verónica Saiz, a researcher at the ARL. And it can even sample at night, thanks to its night navigation system, according to the SINC agency.

“With all the data that the robot records and processes, the producer obtains a map of his plot, which synthesizes the key information needed for advanced crop management. VineScout does not replace the winegrower, what it does is facilitate his work, avoiding the hardest part in the field and enhancing his knowledge and experience, which is now nourished with more accurate and more quickly updated information & rdquor ;, Rovira emphasizes.

To navigate through the plots, the robot incorporates a system totally independent of the GPS signal, one of the great advantages and differences with respect to other systems on the market.

In this way, does not require reloading of pre-recorded maps, something farmers are not used to and that ends up being a dissuasive factor for the adoption of digital technologies. Thanks to it, VineScout is able to circulate through the vines autonomously, avoiding obstacles and collisions.

“This robot incorporates three perception devices at the front. Two of them allow the system to navigate in a two-dimensional network and do not require the intervention of no operator to drive it when the robot moves between rows. In addition, the safety system makes it stop at any obstacle that may appear on the road, waiting seven seconds for the path to clear or stopping the robot safely and acoustically warning the operator if it is a permanent obstacle & rdquor ;, adds Andrés Cuenca, also from the ARL. Thus, VineScout opens the door to automation in crops where GPS technology or other global navigation satellite system (GNSS) cannot be permanently and reliably guaranteed.

Applications in combines and sprayers

This system has been implemented in a terrestrial robot whose main objective is to collect data from crops, but it could be included in many other autonomous systems, such as harvesters or grape harvesters, weed removal machinery and sprayers for crop protection.

“VineScout is a completely new approach to agricultural automation for trellising crops, with multiple benefits: it is a self-contained system that can be used on plots where the GNSS signal cannot be permanently guaranteed, paves the way towards the use of big data in agriculture, provides critical information on key factors for sustainable agriculture, allows the integration of other sensors to expand its information capacity and, however demanding the environmental conditions, it has proven to be robust and reliable & rdquor ;, sums up Rovira.

It may interest you: They invent a laser robot to remove weeds without pesticides

Home Videos The WORLD of WINE – Wine News. Cheap wine, tasting notes and cooking with wine The World of Wine – May 2021 … END_OF_DOCUMENT_TOKEN_TO_BE_REPLACED

How to visit Napa Valley on a Budget. In this video Carson and I explain a few ways to enjoy Napa on the cheap. Tip and advice about how to visit Napa … END_OF_DOCUMENT_TOKEN_TO_BE_REPLACED

Home Videos Get To Know Argentina Wine | Wine Folly If you love Malbec, Argentina is your ultimate wine region. But that’s not … END_OF_DOCUMENT_TOKEN_TO_BE_REPLACED