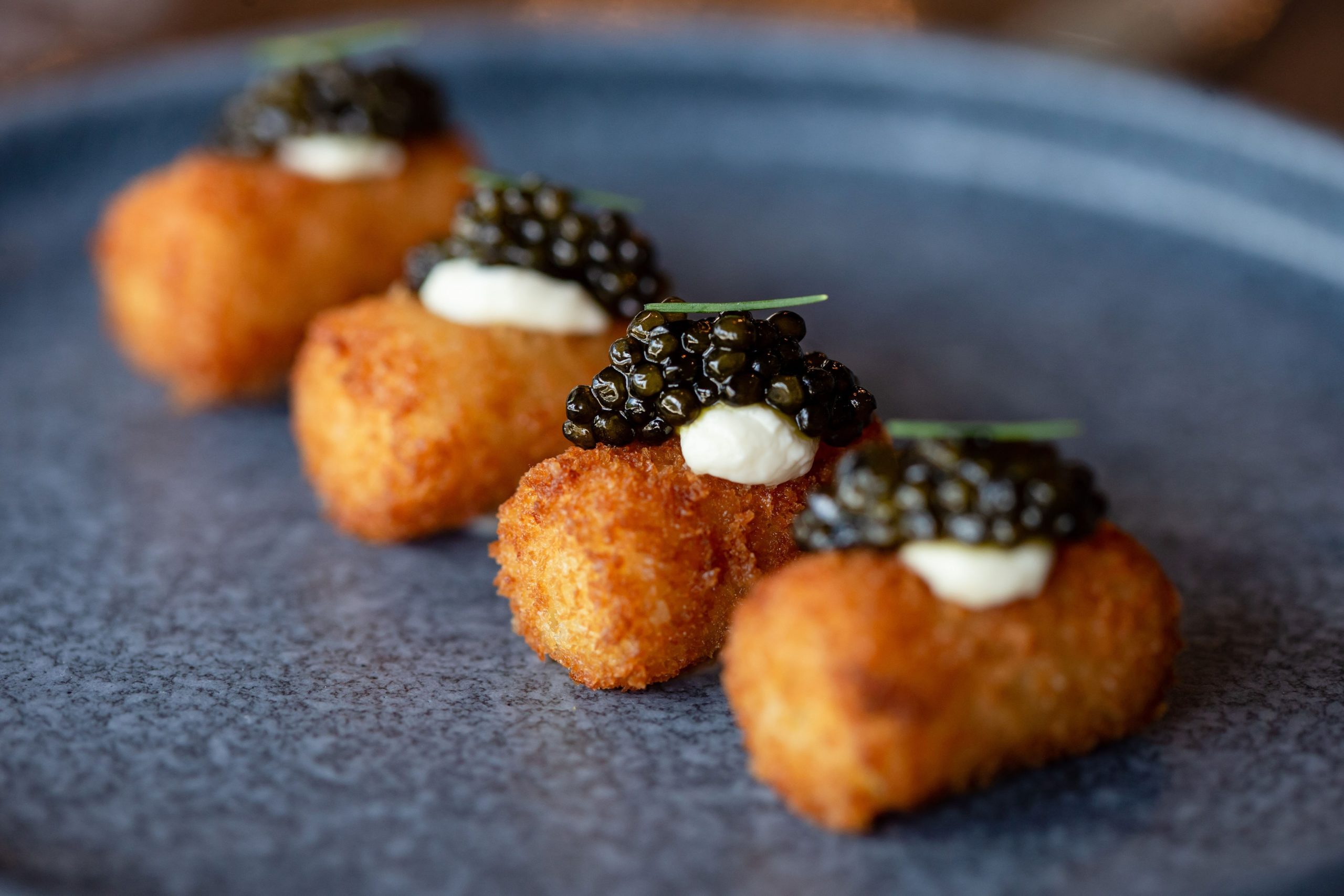 Riel, 1927 Fairview, is celebrating its four-year anniversary by bringing back its former sous chef EJ Miller for a one-night celebration. Miller and Riel executive chef Ryan Lachaine will be cooking up some of the restaurant’s greatest hits alongside signature cocktails from bar manager Derek P. Brown and crew.Reservations are encouraged and can be made from 5 to 10 p.m.

Tacos A Go Go continues its Taco Tuesday Team-Up series with a new limited-time taco from chef Dawn Burrell. Every Tuesday this month, Burrell’s Beef Cheek Birria taco — featuring beef birria, adobo, Monterey Jack cheese, red onion, fresh cilantro pickled leaves and sliced radishes — will be available at all Tacos A Go Go locations. A portion of proceeds from every taco sold will benefit I’ll Have What She’s Having in support of women’s health.

You have another shot at getting One Fifth’s duck heart bolognese, a favorite from its Romance Languages iteration.

Brennan’s of Houston, 3300 Smith, invites guests to an Alexander Valley Vineyards Wine Dinner on Wednesday, January 27, beginning with a reception at 6:30 p.m. and dinner at 7. Guests will dine on dishes from oyster, potato and leek vichyssoise and boudin-stuffed quail to chili-rubbed NY Strip with blue cheese au gratin and a basque cheesecake dessert. Cost is $115 plus tax and gratuity.

Chef Chris Shepherd along with One Fifth chef de cuisine Matt Staph and their team will celebrate the final anniversary of One Fifth Houston, 1658 Westheimer, with a special dinner on Wednesday, January 27. Enjoy dishes such as hummus and pita from its Mediterranean concept, hush puppies and crab stuffed jalapeños from Southern Comfort, Romance Languages favorite duck heart bolognese, cast iron ribeye and pommes aligot from the Steak concept, and a selection of desserts. Cost is $100 per person, plus tax and gratuity, and reservations can be made from 4 to 10 p.m.

Wine Down Wednesday at Hugo’s

On Wednesdays, Hugo’s, 1600 Westheimer, will feature a special Wine Down Wednesday menu which features three courses (with choices in appetizer and entree courses) and optional wine or cocktail pairings.

Xochi, 1777 Walker, is adding specials on two week nights, which will be offered weekly, but with changes to the individual offerings. On Wednesdays, guests can enjoy a wood-grilled ribeye with mole pasilla, sides and glass of wine for $35 plus tax, available dine-in or to-go. Every Thursday, Xochi will offer a Tlayuda & Mezcal combo special for $25.

Max’s Wine Dive, 4720 Washington, is hosting a no-charge wine tasting, with special guest Robert Gilroy of Domaines Albert Bichot at 6 p.m. The tasting will feature Bichot wines from Burgundy, France, with samples including Cremant de Rose, Aligote, Macon-Village, VV Pinot Noir, and Macon-Villages at no charge and half-off all appetizers for guests in attendance. Call 713-880-8737 for reservations.

Every Friday, Feges BBQ, 3 Greenway Plaza Suite C-210, will be offering a free meal for Veterans. Simply mention your service at the register, and the bbq spot will take care of the rest. The offer is valid in-store only.

The Humble Rodeo and BBQ Cookoff

The Humble Rodeo and BBQ Cookoff will take place on at the Humble Civic Center & Arena Complex, 8233 Will Clayton Parkway, this Friday and Saturday (with the carnival and rodeo continuing through the next week). BBQ admission is $10 at the gate (free for kids 5 and under) and includes one meal provided by the Feed the Public tent, plus access to vendors and public tents (rodeo access is separate).

Raclette Party on the Patio at Montrose Cheese & Wine

of 2021 on Saturday, January 30 from 1 to 5 p.m. Hit the patio to enjoy the typical après-ski, melty raclette cheese scraped from the half-wheel atop potatoes with caramelized onions,

will host a Virtual Wine Tasting on Saturday, January 30 at 5 p.m. The tasting will explore Pinot Noirs from the Central Coast with Siduri Wines, journeying through four Pinot Noirs. Tickets are $150 and will include four bottles of wine as well as a Revival Market Charcuterie Board to snack on while tasting. Call 713–880-8463 or stop by Revival Market to purchase.

game-watching on its 80-inch projection screen and bar side TVs. Doors open at 11 a.m. and all-day specials include $4 domestic beer, bloodys and mimosas, frozen margs and wells, plus a $6.50 hot dog and beer combo.

Dine Out for a Cause at Le Colonial

Le Colonial, 4444 Westheimer, continues its Dine Out for a Cause series with a fundraiser for Hope Farms, Recipe for Success’ seven-acre farm which fell victim to a robbery resulting in over $40,000 of property being stolen. Now through the end of January, the restaurant will be donating $1 from every special prix-fixe lunch ($25) or dinner ($45) menu directly to Hope Farms and Recipe for Success Foundation in aid of its mission to combat childhood obesity. Menus are available for dine-in and takeout.

Throughout the month of January, Orleans Seafood Kitchen, 20940 Katy Freeway, will be soliciting non-perishable food items to help “pack the pantry” of local nonprofit, The Ballard House, which provides temporary housing for individuals and families who are hospitalized or receiving treatment for a serious medical condition in the Katy area. Guests who bring in three non-perishable food items will receive $5-off their total bill (valid for food orders over $20).

Saint Arnold Brewing Company, 2000 Lyons, has introduced health-minded January Food Specials to its menu, available for dine-in at the Beer Garden & Restaurant or to-go with curbside pickup. Try the Grilled Salmon with white beans, shaved fennel and citrus vinaigrette; a Curry Chicken and Paneer with crunchy chaat and minted yogurt; the Falafel, Farro, and Grilled Vegetable Wrap with smoky tahini sauce; and Roasted Root Vegetables with basil and walnut pesto all month long.

Through the end of January, Tobiuo Sushi & Bar, 23501 Cinco Ranch, will be offering 50-percent off warming bowls of classic chicken udon and cod niru. The promotion available for dine-in or takeaway.

Torchy’s Taco of the Month

Torchy’s January Taco of the Month is dubbed the Fancy Schmancy, a perfect brunch taco made with hot smoked salmon, scrambled eggs, fresh spinach, capers, pickled onions and jalapenos, fresh dill and herb cream cheese on a flour tortilla. Get it for $6.50 and pair it with $3.50 mimosas all month long.

King Cakes at Brennan’s of Houston

Brennan’s, 3300 Smith, has brought back its cinnamon swirled, sparkling King Cakes for the Mardi Gras season, available for pickup and delivery with preorders (one-day notice). Cakes are $24 each and serve six to eight.

L.I.F.E. Menu at The Union Kitchen

Home Videos The WORLD of WINE – Wine News. Cheap wine, tasting notes and cooking with wine The World of Wine – May 2021 … END_OF_DOCUMENT_TOKEN_TO_BE_REPLACED

How to visit Napa Valley on a Budget. In this video Carson and I explain a few ways to enjoy Napa on the cheap. Tip and advice about how to visit Napa … END_OF_DOCUMENT_TOKEN_TO_BE_REPLACED

Home Videos Get To Know Argentina Wine | Wine Folly If you love Malbec, Argentina is your ultimate wine region. But that’s not … END_OF_DOCUMENT_TOKEN_TO_BE_REPLACED