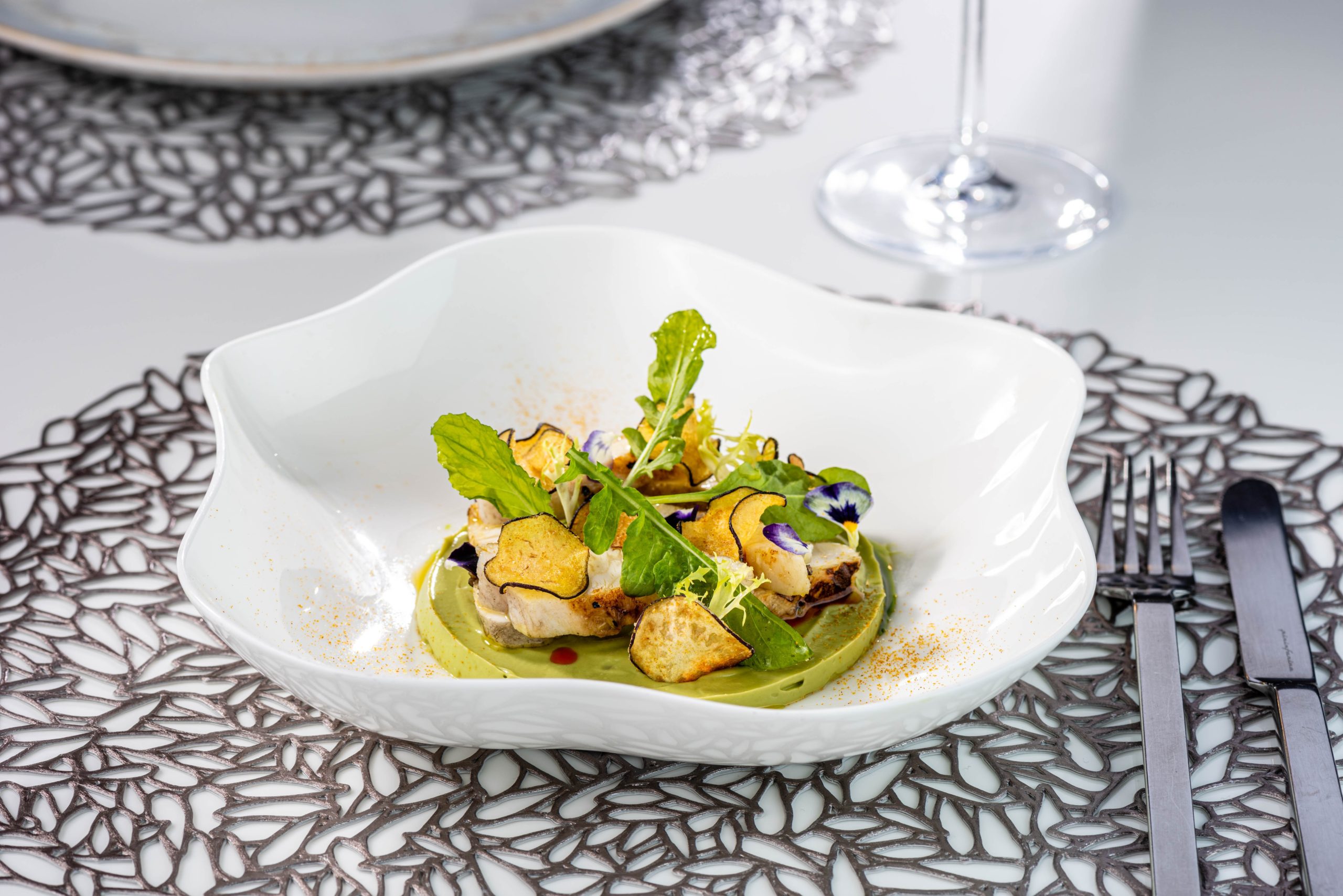 Grimaldi’s will be celebrating Tax Day by offering traditional cheese pizzas for $10.40.

Opening of Le Jardinier at MFAH

Le Jardinier at MFAH, 5500 Main, is set to open within the Nancy and Rich Kinder Building at the Museum of Fine Arts, Houston this Tuesday. French for “the gardener” and led by Michelin-starred chef Alain Verzeroli, the concept is rooted in French culinary technique and inspired by seasonal ingredients used at the peak of their potential. Reservations are available via Resy on Tuesdays through Saturdays from 5 to 10 p.m.

New American bistro KP’s Kitchen, 700 Town and Country, will commemorate its successful debut with a ribbon-cutting ceremony at 1 p.m. Leaders from the Greater Houston Chapter of the Texas Restaurant Association will be on hand to conduct the event. Open for lunch, dinner and weekend brunch, the menu is a crowd-pleasing blend of Southern classics such as 12-hour baby back ribs, Gulf crab cakes and a hot chicken sandwich, plus café fare from cheese plates and ahi tuna to filet mignon.

Del Frisco’s Double Eagle Steakhouse is hosting its annual “The War of the Rosés” on Thursday, May 20 from 6:30 to 7:30 p.m. Attendees will be asked to judge their favorite Rosés from eight heralded bottlings, and the wine tasting event is held simultaneously at Del Frisco’s locations across the country. Guests will also be served an assortment of Double Eagle hors d’oeuvres. Tickets cost $45 per person and can be purchased online.

Little Woodrow’s Midtown, 2306 Brazos, will host its annual Gumbo Cookoff from 11 a.m. until the winners are announced at 7 p.m. Email lwmidtownagm@littlewoodrows.com to sign up to compete, or simply make your way to the bar for cold beer and free sampling on the day of.

Chef Martin Weaver, formerly of KUU and Brennan’s, is previewing his new concept, Watever Fresh Farm Direct with intimate weekly chef’s table dinners every Saturday night at Bravery Chef Hall, 409 Travis. The menu will feature revolving themes based on the season, with wine pairings and cocktails created by Mario Pineda of the forthcoming craft cocktail bar Bhutane (inspired by Bhutan, the “happiest place.” Dinners must be pre-booked via Resy (“Chef’s Table” under “upcoming events” at Bravery Chef Hall). Saturday night seatings (two per night, ten socially distanced bar seats plus two tables for two per seating) are $85 per person for five courses, with an a la carte wine pairing available.

A new Spring Branch Farmers Market is taking place every Saturday and Sunday from 9 a.m. to 2 p.m. at 7202 Long Point.

May is National Asian American and Pacific Islander Heritage Month and to celebrate, Central Market, 3815 Westheimer, will recognize 24 different American Asian- and Pacific Islander-owned businesses as a part of its ongoing Be the Change campaign. A few highlights include Yummi Sushi, the country’s first clean ingredient sushi program; Mylk Labs, offering a variety of all natural, non-GMO, whole grain, gluten-free and vegan oatmeal cups sweetened with only organic coconut sugar; and Sanzo Soda, which celebrates high-quality Asian flavors without the added sugars, artificial flavors and preservatives.

For the month of May, Etoile Cuisine et Bar, 1101-11 Uptown Park, will join and area-wide effort to help bring money to a building fund for The Bridge Over Troubled Waters, a Pasadena-based domestic and sexual violence advocacy nonprofit. Chef Philippe Verpiand has created two special prix-fixe menus, one for dinner ($65, with $7 going to charity) and one for weekend brunch ($36, with $4 going to the program).

are currently offering free kids meals with the purchase of an adult entrée. Families simply need to mention the offer to redeem between now and May 31.

May Taco of the Month at Torchy’s Tacos

Torchy’s Tacos announced its May Taco of the Month: The Tokyo Drifter. It features teriyaki glazed pulled pork, fried wonton strips, sweet and sour veggie slaw, sesame Sriracha mayo and cilantro, served with a lime wedge on a flour tortilla for $5.75. Pair it with Torchy’s featured May margarita, the Raspberry Meltdown, available frozen or on the rocks and made with 100—percent agave tequila and topped with a float of Razzmatazz Raspberry Liqueur. Portions of the proceeds from Taco of the Month sales go to Torchy’s charitable partners, including the Make a Wish Foundation, MD Anderson and Phoenix House.

Brett’s Barbecue Shop Collab and a New Snack at Yelo

Yelo, 23119 Colonial Parkway, is teaming up with fellow Katy spot Brett’s Barbecue Shop for a limited-time Burnt Ends Banh Mi. Brett’s BBQ, will provide the goods and Yelo will pack banh mis to the brim with burnt ends and all of their signature banh mi fixings like their pickled papaya and carrot slaw. The collaboration will be available Saturdays through the month of May. Chef Cuc Lam has also introduced her latest creation: Lemongrass Pepper Pork Riblets, joining the ranks of snacks like fresh spring rolls, crispy prawn crackers, and chili crab rangoon.

Chef Chris Shepherd fist made bacon sausage at Underbelly, asking Javi Salvador, his butcher, to cure the bellies like bacon, grind them, stuff them into a casing and smoke them like sausage (first with lamb, then with pork, which was the winner). Years later, you can now find packages of Shepherd’s Pecan Smoked Bacon Sausage at more than 60 H-E-B stores in Houston, right in the smoked sausage section for $8.29 (16-ounce package).

Made using matzo meal for extra crunch, the Bronx Fried Chicken ($22.95) has returned to Kenny & Ziggy’s, 2327 Post Oak, for the season. The delicatessen has also brought back its Chilled Hungarian Sour Cherry Soup ($4.95 for a cup or $6.95 for a bowl).

North Italia, 1700 Post Oak, has launched a new spring menu with some fresh, seasonal additions available now through the end of summer. Highlights include a Farmer’s Market Board, Tuna Crudo, Burrata Anolini and Wagyu Skirt Steak Tagliata, among other dishes.

Home Videos The WORLD of WINE – Wine News. Cheap wine, tasting notes and cooking with wine The World of Wine – May 2021 … END_OF_DOCUMENT_TOKEN_TO_BE_REPLACED

How to visit Napa Valley on a Budget. In this video Carson and I explain a few ways to enjoy Napa on the cheap. Tip and advice about how to visit Napa … END_OF_DOCUMENT_TOKEN_TO_BE_REPLACED

Home Videos Get To Know Argentina Wine | Wine Folly If you love Malbec, Argentina is your ultimate wine region. But that’s not … END_OF_DOCUMENT_TOKEN_TO_BE_REPLACED