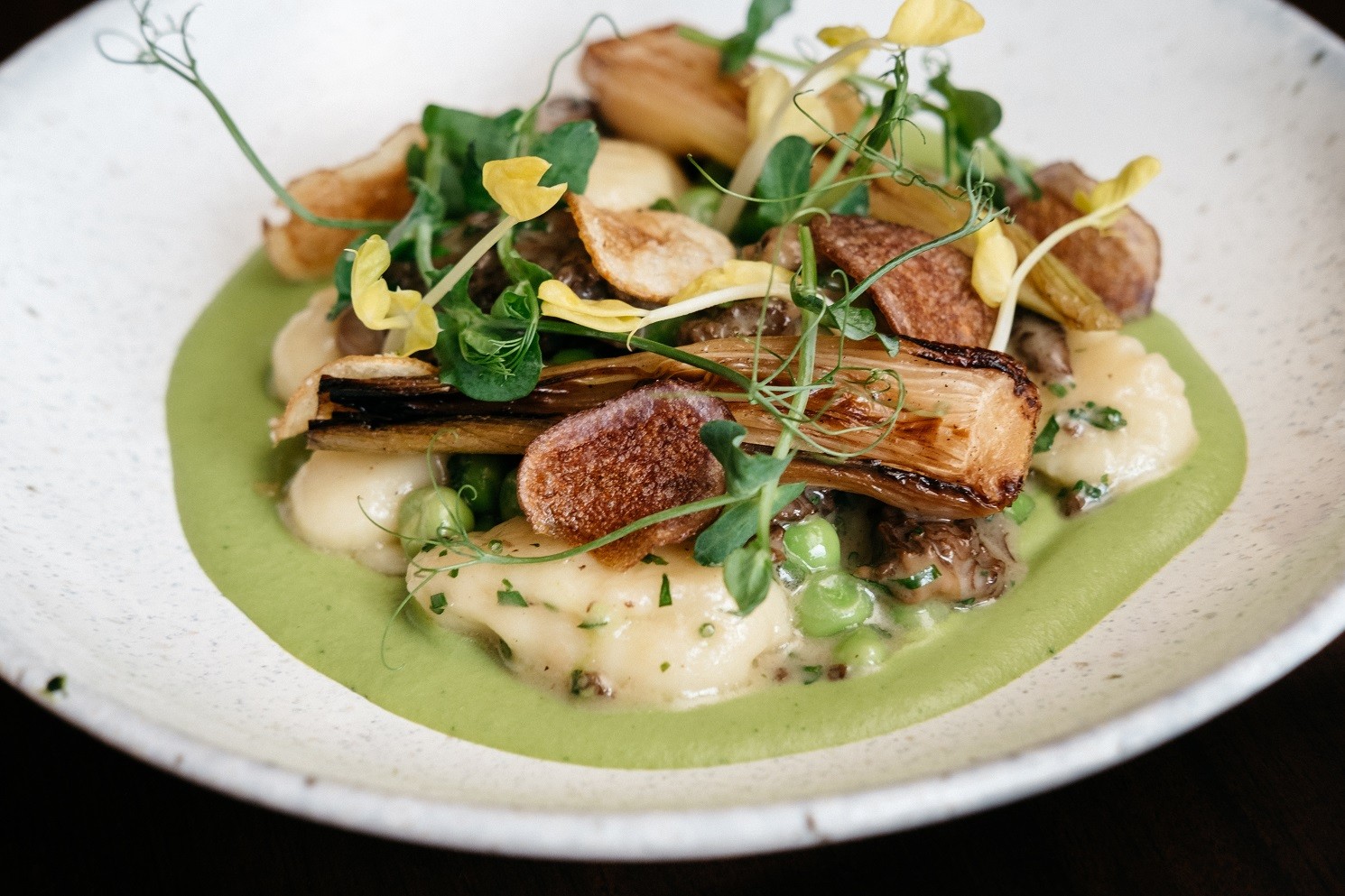 State Fare Kitchen & Bar, 947 Gessner, 15930 City Walk, is continuing its beer dinner series with a nod to Houston’s missed rodeo season, offering a three course rodeo-inspired menu paired with local 8th Wonder Brewery and available through Sunday, March 28 at both locations. Rodeo features include Smoked Short Ribs and a Golden Fried Dessert platter featuring fried Snickers, Oreos and Twinkies. The cost of the dinner is $45 plus tax and tip.

UBP, 1609 Westheimer, is now open on Tuesdays, serving crawfish and only crawfish and rotating flavors throughout the season.

Brennan’s wine guy Marcus Gausepohl and a few of his wine rep friends will present four wine pairing selections tableside at a Courtyard Argyle Wine Dinner at Brennan’s, 3300 Smith. Wines and menu are TBD. Guests can choose seatings anytime between 6 to 7 p.m. in the courtyard. Cost is $112 plus tax and gratuity and seating is limited (and socially-distanced).

Ouisie’s Table, 3939 San Felipe, will host an Influences of Germany Wine Dinner, looking at wines from France’s Alsace to Vienna and pairing the German-influenced wines with a multi-course dinner of Austrian-style food — think brut rose from Austria paired with a boneless quail schnitzel and pepper milk gravy and a Pinot Noir from Baden, Germany coupled with seafood in phyllo dough. The dinner begins at 6:30 p.m. and cost is $95 per person plus tax and gratuity. Call 713-528-2264.

Pier 6, 113 6th, has launched Sunset Sessions every Thursday, featuring live local music, ice-cold beer and fresh crawfish on the restaurant’s waterfront patio from 5 to 9 p.m. as the sun sets over the bay. Reservations suggested.

Check out of Lenten Fridays Dining Guide to find a list of Houston restaurants offering seafood, meat-free and vegetarian dishes on Fridays during Lent.

Chick’nCone, 1919 North Shepherd, is commemorating its one-year anniversary with celebratory specials and a live DJ. Guests can dig into its signature fried chicken inside a freshly-made waffle cone hand-rolled in a variety of sweet, savory, or zesty spices for $7 and sip H-town margaritas along with frozens for $5. Chick’NCone will also hand out free samples and give away one $100 gift card. Enter the drawing on Instagram by snapping at a photo at the event and tagging #chicknconehtx in the post* for a chance to win. The anniversary specials will be offered from noon to 8 p.m.

Crawfish on the Patio at La Lucha

La Lucha, 1801 North Shepherd, will offer crawfish on the patio from 11 a.m. until sold out, featuring mudbugs with Tabasco pepper mash and add-ons including boiled potatoes and corn ($1), roasted garlic ($1), sausage ($9). And a variety of scratch-made sauces (green harissa, white remoulade, kimchi aioli, smoked oyster mayo for 50 cents each).

Phat Eatery, 23119 Colonial Parkway, is joining in on Oxtailpalooza, a combined effort from Katy restaurants that benefits The Ballard House. Dine on miss the Ultimate Curry Oxtails and look out for upcoming specials from Sapore Ristorante Italiano, That’s My Dog, and Scholars & Scoundrels.

In celebration of Holi, one of India’s most beloved holidays, Pondicheri, 2800 Kirby, will feature a variety of vibrant specials from Friday, March 26 to Sunday, March 28. As color is a main theme of Holi, and chef Jaisinghani’s specials will reflect that, from vibrant green dosas and a Holi sandwich to bright beet dosa with beet, tomato chutney, yogurt chutney and sesame seeds.

Antone’s Famous Po’ Boys, 4520 San Felipe; 2724 West TC Jester, 6618 Fannin, continues its ‘H-Town Originals’ campaign by partnering with Dr. Peter J. Hotez for the month of March. “The Dr. Hotez One World” Banh Mi ($8.95) — thinly sliced marinated beef on house-baked French bread served with pickled carrots, cucumber, daikon radish, papaya with a roasted garlic-sambal aioli and fresh jalapeño — will be available at all three Antone’s locations and with 50 percent of its proceeds will go to Texas Children’s Hospital to support the hospital’s Center for Vaccine Development.

Chef Philippe Verpiand has created two special prix-fixe menus, one for dinner ($65, four courses) and one for weekend brunch ($36, three courses) at Etoile, 1101-11 Uptown Park; and from each sale, a portion will go to local nonprofit Abandoned Little Angels, which gifts food, clothing, medicine, medical equipment, and financial support to orphans and disabled children in Vietnam and other countries.

Raises funds for the Houston Food Bank, Rainbow Lodge, 2011 Ella, has unveiled a Food Bank Rescue Menu,a multi-choice, three-course menu with wine for one person for $75 ($5 for each meal sold will go to the charity). The menu is available in-house and to-go from through March 31 and features dishes such as fried Texas quail bites with white cheddar grits and bourbon bacon gravy, pan-seared snapper with English pea and carrot risotto, and croissant bread pudding.

Up next in the Tacos A Go Go “Taco Tuesday Team-Up” program is chef Chris Williams of Lucille’s. Williams and Tacos A Go Go chef-owner Maribel Gomez have created the Holy Mole Taco — featuring braised oxtail, sweet potato and cabbage slaw in a corn tortilla topped with oxtail gravy, available at all Tacos A Go Go locations on every Taco Tuesday throughout the month of March. A portion of proceeds from each taco sold will benefit Williams’ non-profit, Lucille’s 1913, which has donated more than 190,000 meals to people in need since the start of COVID-19.

Torchy’s Taco of the Month

has brought back its fan-favorite Roscoe Taco as March’s Taco of the Month. The savory-sweet creation features a crispy waffle, fried chicken, bacon and a fried cage-free egg nestled into a flour tortilla and drizzled with maple syrup, and it is available through March 31 for $5.95.

Social Hour at Guard and Grace

Guard and Grace, 500 Dallas, has relaunched its social hour, offering a new menu featuring regional comfort food and savory menu for dine-in in bar and lounge areas Tuesday through Friday from 3 p.m. to 5:30 p.m. Chef Troy worked closely with executive chef Adam Stephens to create modern spins on eats including the smoked wagyu brisket taco ($4); Korean chicken sliders ($3.50); housemade queso with a choice of lobster ($18), chorizo ($9) or green chili ($8); fried oysters ($6) with umami aioli, lime and cilantro; and fresh oysters on-the-half-shell ($1.75/each). Select beers, wines by the glass, and cocktails will be available at discounted prices as well.

Kenny & Ziggy’s, 2327 Post Oak, will be including the brand new The Express Haggadah with its seder meals, including local orders picked up at the deli and the Passover in a Box kits shipped nationwide via Goldbelly.com. The first day of Passover in 2021 is Sunday, March 28. The Express Haggadah is a modern and slick seder service guide, created to streamline the service in order to carry on the custom of retelling the beautiful story in its entirety. Included in Kenny & Ziggy’s Passover in a Box is two pounds of dinner-cut brisket, matzo balls, two quarts of chicken soup, five stuffed cabbages, five pieces of gefilte fish, carrot soufflé, potato kugel, one pint of tzimmis, one pint of charoset, horseradish, macaroons and brownies.

Home Videos The WORLD of WINE – Wine News. Cheap wine, tasting notes and cooking with wine The World of Wine – May 2021 … END_OF_DOCUMENT_TOKEN_TO_BE_REPLACED

How to visit Napa Valley on a Budget. In this video Carson and I explain a few ways to enjoy Napa on the cheap. Tip and advice about how to visit Napa … END_OF_DOCUMENT_TOKEN_TO_BE_REPLACED

Home Videos Get To Know Argentina Wine | Wine Folly If you love Malbec, Argentina is your ultimate wine region. But that’s not … END_OF_DOCUMENT_TOKEN_TO_BE_REPLACED