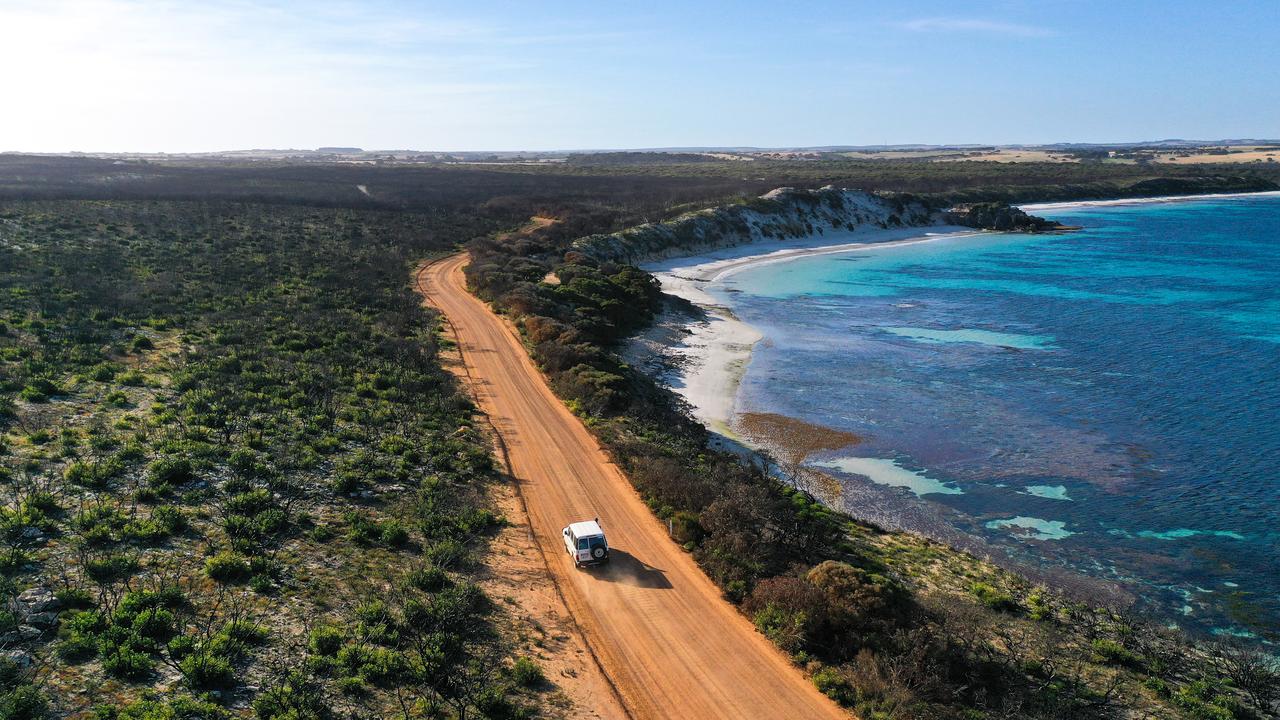 In the minds of Australians and many around the world, this was a terrifying inferno island – helplessly overcome by last year’s bushfires and razed to the ground with little left behind.

The deadly bushfires were certainly devastating for Kangaroo Island, a patch of rugged beauty off the South Australian coast. They tore through the western end of the island and claimed 96 per cent of Flinders Chase National Park, arguably its top tourism drawcard.

But so much of the island was untouched by fire, and a year on, the wilderness is regenerating, wildlife is in abundance, new tourism experiences are launching and even the national park is open again. And locals are very keen to welcome us back.

Kangaroo Island is one of 13 key tourism destinations where Australians will be able to fly for half price when a Federal Government package to support struggling tourism regions launches this week.

The island, which is most popular with international tourists and interstate travellers, has traditionally struggled to attract visitors from South Australia.

But in an interesting twist of fate, border closures during the pandemic helped South Australians rediscover the unique island off their shore, and the next step is to let the rest of Australia know that Kangaroo Island is thriving.

“In that time between the bushfires and COVID, we were really worried that there was misinformation out there in Australia and around the world that Kangaroo Island was no longer a place to go to,” said Yael Katz, who co-owns the boutique luxury retreat Ecopia Retreat with her partner Rob Clements.

“People knew you’d go to Kangaroo Island for the natural wonders, and (they thought) it was all just burnt to the ground, that the whole island was on fire. I still get the occasional question of, ‘So is it all burnt? Is it all black? Is there any wildlife?’”

“Half of the island has not been affected, and although the bush in the national park will not look the same in our lifetime, a silver lining is that now all the beautiful things on the eastern side of the island are in the limelight,” she said.

Many assume Flinders Chase National Park is a no-go zone but visitors are allowed to explore the park on self-drive trips and stop at famous spots like Remarkable Rocks, Weirs Cove, Cape du Couedic lighthouse and Admirals Arch.

And there are plenty of animals around – Seal Bay on the island’s southern coast, which is famous for its colony of about 1000 sea lions, was untouched by fire, and Hanson Bay Wildlife Sanctuary recently relaunched its nocturnal tours, where visitors can see an abundance of koalas, wallabies, kangaroos and echidnas.

Meanwhile, many areas of the island that were directly affected by bushfire are in the midst of stunning regeneration, said Craig Bradbery, the chief operating officer of Baillie Lodges, which lost its flagship property Southern Ocean Lodge to the fires.

“The images of the bushfires on Kangaroo Island as shared around the world were pretty devastating and there’s no denying the bushfires were catastrophic,” Mr Bradbery told news.com.au.

“But the Australian bush is designed to bounce back, and as we know many Australian native species need fires in order to propagate. The landscape including Flinders Chase National Park is regenerating quickly and the wildlife is also thriving once again. Businesses that were forced to close because of fire damage compounded by the advent of COVID-19 have already reopened or plan to.”

Southern Ocean Lodge was one of 56 buildings destroyed by bushfire on Kangaroo Island. Baillie Lodges is working on plans with the original architect to rebuild the property.

Of the rebuilt Southern Ocean Lodge, Mr Bradbery said guests could expect “of all the elements that made a stay so special, plus some new features to really take the experience to new heights”.

“Visitors have strongly supported the Kangaroo Island tourism and hospitality industry in the year since the bushfires swept through, and to see the island’s natural wonders which are now showing the green shoots of regeneration,” he said.

“We have no doubt that Southern Ocean Lodge 2.0, as we’re dubbing it, will be well received and frequented by visitors from Australia and hopefully overseas by the time it reopens in late 2022 or early 2023.”

Tourists volunteer to help the regeneration

Ms Katz’ Ecopia Retreat was not directly affected by the fires, but about 30 per cent of the surrounding property was burnt.

She said as South Australian tourists came flocking last winter, she was heartened to find they weren’t just willing to support bushfire-affected regions, but generally interested to learn about the fires and see the regrowth – and in some cases, they volunteered to plant on her property.

“We provide all our guests with maps marked with walking trails and really encourage people to go for walks and get a feel for the place,” she said.

“The fire grounds are about a 10-minute walk-through, and you can see the burnt bush and where the fire slowed down … and alongside that you see completely intact bush with wallabies and kangaroos and birdlife, and you think wow, this is just one year on.

“People say nature is beautiful but they talk about nature intact, and don’t fully understand until they see a natural event and the recovery. That is incredible.”

Ms Katz said even before the fires, the island had been in a tourism boom, with new experiences, expanded businesses and upgraded facilities, which made a trip down now all the more worth it.

“It’s really been evolving,” she said. “It’s almost like it’s perfect timing to have a much higher profile now because of the bushfires, because we’ve actually got a lot more to offer.

“It’s not just about the iconic natural wonders of the Flinders Chase National Park, but also amazing dining experiences, wine tasting – a lot more depth to the experience.

“After years of being the best-kept secret in an underrated state, people are realising that wow, there is this incredible island, the third-largest in Australia, so raw and wild and filled with wildlife.”

Locals’ tips for your stay

We asked Kangaroo Island locals for their top recommendations for visitors, and this is what they want you to know.

Flinders Chase National Park: While camping is still not available, the park is open to self-drive visitors who can enjoy iconic stops such as Remarkable Rocks, Weirs Cove, Cape du Couedic lighthouse and Admirals Arch, which is famous for the local fur seals. Be sure to call in to Vivonne Bay General Store as you head in, and remember the park is huge – so give yourself time and plan your trip accordingly.

Penneshaw: If you arrive by ferry, don’t head straight to your accommodation – hang around the pretty port town Penneshaw for a while. You can stock up on essentials at the local supermarket, and a charming new cafe, Millie Mae’s Pantry, sells amazing coffee and food options.

Gastronomo the Enchanted Fig Tree: This is an extraordinary dining experience where guests sit and eat among the branches and roots of a massive 120-year-old fig tree – which thankfully survived the bushfire. The site hosts long lunches as well as dinners at different times, from December until the end of April.

Prospect Hill: The highest point on Kangaroo Island, this spot offers unparalleled views, including of Pennington Bay and Penguin Lagoon. It’s a 500-step climb, but the stairs were replaced in 2019 so it’s all quite new.

Pennington Bay: A must-visit spot recommended by locals, it’s a stunning and quiet beach where the Beach Barista serves quality coffee and snacks from a blue converted Kombi.

Bike tour and gin tasting: Tour company Exceptional Kangaroo Island has launched a new e-bike tour through the Cygnet River valley that lets guests experience nature and wildlife while learning about fire ecology. The tour includes an al fresco lunch in a bush setting, and a tasting at Kangaroo Island Spirits, which is Australia’s first dedicated craft gin distillery.

Takeaway food hampers: Whether you’re taking them on a scenic picnic or enjoying them at your accommodation, more providers are offering gourmet hampers on the island. Oyster Farm Shop at American River has launched eco-boxes of super fresh seafood you can eat there or take away, while The Islander Estate Vineyards, which offers a range of tasting experiences, also offers takeaway or eat-in cheese platters.

Home Videos The WORLD of WINE – Wine News. Cheap wine, tasting notes and cooking with wine The World of Wine – May 2021 … END_OF_DOCUMENT_TOKEN_TO_BE_REPLACED

How to visit Napa Valley on a Budget. In this video Carson and I explain a few ways to enjoy Napa on the cheap. Tip and advice about how to visit Napa … END_OF_DOCUMENT_TOKEN_TO_BE_REPLACED

Home Videos Get To Know Argentina Wine | Wine Folly If you love Malbec, Argentina is your ultimate wine region. But that’s not … END_OF_DOCUMENT_TOKEN_TO_BE_REPLACED