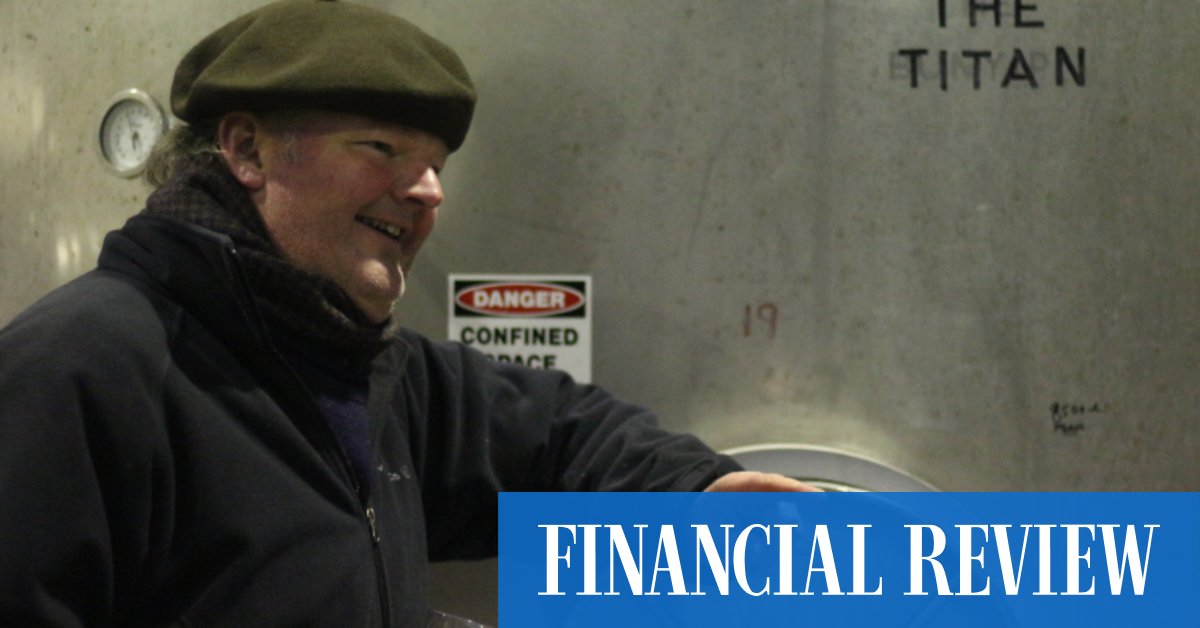 This is Michael Glover’s way of saying hello. I’ve rung the winemaker to talk about the four bottles I’ve just tasted. They’re extraordinary, delicious, exciting, some of the best drinks I’ve tried so far this year, and I want to know more about them and his wine label, Mammoth.

But Glover wants to talk about his bee hive.

“I’m sitting next to mine as we speak,” he says. “Just watching the bees. Have you ever noticed how fast they go? As they come in to land they really motor, and only put the anchors on about a metre out from the hive. It’s a real sight.”

You won’t meet a more passionate, articulate warrior for wine than him; a person more firmly wrapped up in its romance, mystery, culture and history – as this video of him speaking at a recent festival demonstrates.

But he will hold forth with equal passion on plenty of other topics, too. When I first met him more than a decade ago, when he was employed as the winemaker at Bannockburn, near Geelong, Glover spoke with as much verve about his love for the pianist Glenn Gould as he did about the extended time his chardonnay was spending on lees. He spoke, too, with feeling, about the people who have inspired him on his wine journey, who have strengthened his resolve to not compromise when it comes to quality.

That unwillingness to bend – to commercial pressure, to the whims of the market – is one of the reasons why Glover left Bannockburn in 2015 and returned to Nelson, in New Zealand’s South Island, where he’d grown up and, as a teenager, helped his parents plant a vineyard.

It’s also why he started his own side project, Mammoth, around the same time, to produce small quantities of wine made exactly the way he wanted, from grapes sourced from unirrigated vineyards in and around Nelson.

“All of the Mammoths are made from dry-grown and organic-certified vineyards,” says Glover. “There will be no compromise on those two aspects, now or in the future. I haven’t turned a tap on in a vineyard for 25 years, and I don’t intend to start now.”

Another non-negotiable is that Glover bottles the Mammoth wines when they’re good and ready – even if that means they’re two or three vintages older than most of the other wines on the market.

“So often, winemakers venturing down the path of fermenting with whole bunches, or fermenting whites on skins go and bottle their wines early and release them too early,” he says. “But the wines haven’t resolved, they’re still coming into balance. They need more time! For the first year in barrel a wine is still becoming a wine; real maturation doesn’t begin until year two. Time is gold!”

While New Zealand was the perfect place, climatically, to make unconventional, uncompromising wine like this, says Glover, it wasn’t necessarily the best environment for them commercially or critically.

“Wine drinkers embraced the wines,” he says. “But the industry was like: What are you doing? The way I was making wine wasn’t the done way. I made a speech at a wine conference and I asked the audience: Why do you irrigate? It rains here, a lot. And a guy literally stalked me for the next two days he was so angry I’d suggested they turn their taps off in the vineyard.

“When I showed the Spectacular Rustgill (an amber-coloured, skin-contact pinot gris) to a leading NZ wine critic, I could see in his eyes, it was like a werewolf had appeared in front of him.”

So, late last year, Glover moved back to Australia and is now living on Victoria’s Mornington Peninsula – partly because he feels his wines might be more welcomed here (“I’ve sold more in two months than I would have sold in a year in New Zealand”), and partly for family reasons (his wife, Cath, has started a job in Melbourne, and their two children both live here).

He has found some local, dry-grown, organic vineyards that he will make wine from this vintage and release under the Mammoth label, but he also intends, post-COVID, to keep on making wine in Nelson each year. Just small quantities. Enough to sell direct, to customers and retailers who get what he’s trying to do, who understand his no-compromise approach.

I just want to make small batches of wine and sell them to the people I like. The goodies. I don’t want to deal with the baddies.

He’s had enough of marketers pressuring him to grow the brand, to increase volume, to discount the wines to get into restaurants – the whole “dreaded business” side of the wine industry.

“I’m not cut out for it,” says Glover as a bee lands on his hand. “Wines are very personal expressions. You want them to go where they’ll be respected and treated well. I just want to make small batches of wine and sell them to the people I like. The goodies. I don’t want to deal with the baddies. “Wine is such a noble and ancient profession – but there are so many baddies.”

2016 Mammoth Spectacular Rustgill [Nelson]
Fully-ripe pinot gris grapes have dark-coloured skins – not as deeply purple as pinot noir, more a copper colour – and if the grapes are made more like a red wine than a white (juice fermented in contact with the skins), and matured in a barrel for a year and-a-half, the result is something like this: a beautiful, rich, amber-coloured fluid with an utterly seductive texture, like segments of slippery, super-ripe peach. $42

2015 Mammoth Rare White [Waimea Plains]
This is sauvignon blanc, but you’ll need to forget everything you might expect from that grape variety grown in this – or any – part of New Zealand. The wine is about as far from a cheap-‘n’-cheerful, crisp-‘n’-clean fruit-bomb as it’s possible to get. After two weeks’ whole-bunch wild ferment, the sauvignon juice was pressed into the barrel, where it spent two years on lees before bottling. The result is deep yellow, richly textured and deeply satisfying (match it with your favourite full-flavoured fish dish), with the grape’s “sauvage”, floral, herbal essence preserved in sweetly oaken aspic. Stunning wine. $52

2015 Mammoth Untouched Pinot Noir [Moutere Hills]
Michael Glover wanted to find out what would happen if he took top-quality, dry-grown, low-yielding pinot noir grapes and turned them into wine with as little “handling” as possible: no destemming, no additions, no plunging, no new oak, no fining, no filtration and so on, with the only input being the decisions of when to pick, when to press, and when to bottle. Six years later the result is a deliciously approachable, full-flavoured expression of pinot: round, generous, supple, long and savoury. $58

2015 Mammoth Pinot Noir [Upper Moutere]
One of the most impressive and serious (as in: commands your attention, demands to be taken seriously, needs time for all the complexity to be revealed on your tongue) Kiwi pinots I’ve had for some time. Very low yields, 100 per cent whole bunch ferment, ageing in one-third new oak all bring a density and concentration and layer after layer of character to the wine: dark in colour, rich in fruit but full of savoury notes of digestif, undergrowth, plum-stone and earth. Michael Glover thinks this will continue to evolve over many years in the cellar. I strongly agree. $68

Home Videos The WORLD of WINE – Wine News. Cheap wine, tasting notes and cooking with wine The World of Wine – May 2021 … END_OF_DOCUMENT_TOKEN_TO_BE_REPLACED

How to visit Napa Valley on a Budget. In this video Carson and I explain a few ways to enjoy Napa on the cheap. Tip and advice about how to visit Napa … END_OF_DOCUMENT_TOKEN_TO_BE_REPLACED

Home Videos Get To Know Argentina Wine | Wine Folly If you love Malbec, Argentina is your ultimate wine region. But that’s not … END_OF_DOCUMENT_TOKEN_TO_BE_REPLACED