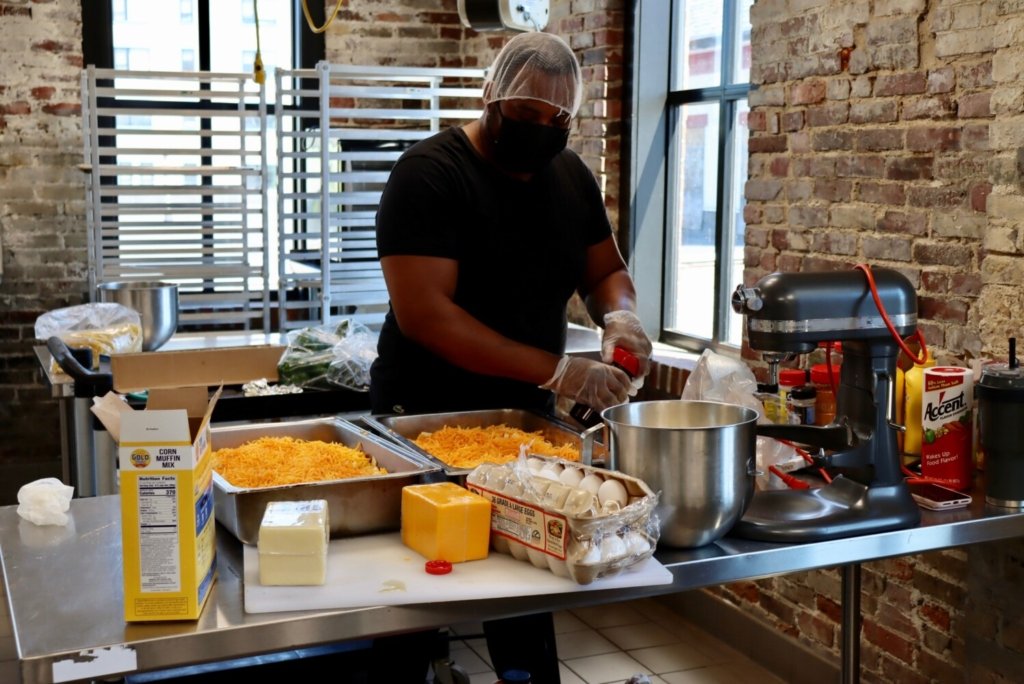 Martin Beavers didn’t know what he wanted to do with his life until he moved to Maine four years ago to be closer to his father. He worked a lot of different jobs for a while, but eventually landed at The Lunch Box in Lewiston, where he cooked the same soul food his mother used to make for him when he was growing up in the Bronx.

“The lines were out the door every single weekend I was there,” Beavers said.

When he moved to a convenience store in Westbrook that had a kitchen in the back, his fans followed him – and his fan base grew. They followed him again when he quietly opened his new takeout business, Soul Food Paradise, at the Fork Food Lab in Portland last week. He started serving at noon, and two hours and 75 meals later he sold out.

Beavers’ food is based on his mother’s recipes. Her name is Tanya Bennett, and she still lives in the Bronx.

“My mother was a beast in the kitchen,” he said. “She cooked for the whole neighborhood every weekend.”

Sometimes she’d lay out a huge spread of Maryland blue crabs on long tables, Beavers recalled, and invite anyone who was hungry to dig in.

“My mother always taught me, never be stingy with food,” Beavers said. “Nobody should ever have to thank anybody for food.”

Beavers’ menu includes oxtails, fried chicken, BBQ chicken, jerk chicken and smothered pork chops. Sides and veggies include baked mac and cheese, collard greens, candied yams and potato salad. The menu offers plenty of options at different price points. Order a plate of smothered chicken with a side and a veggie, for example, and you’ll pay $13.50. Add a veggie and the price goes to $16.50. Add another side and another veggie, and the cost is $23. All plates come with cornbread.

Beavers hopes to open his own restaurant someday, but for now he is at Fork Food Lab, 72 Parris St., from 11 a.m. to 8 p.m. Thursdays through Sundays. Just drop by to order, or pre-order from his website at soulfoodparadise207.com.

Portland Wine Week will be held from June 14-20, and boy are people thirsty. The grand opening Women in Wine dinner at the Falmouth Country Club is already sold out. So are all but three of the 11 wine sails. In all, a quarter of the nearly 40 events are sold out, so if you have been looking forward to this all winter, better get busy and log onto the website, portlandwineweek.me, and sign up for a class, tasting or wine dinner at a local restaurant.

Events are being held indoors and outdoors, but if you’re still skittish about mingling, you can stay at home and enjoy a virtual wine tasting, Vino and Vivaldi. The online event features musicians from the Portland Bach Experience and pairs music with a wine that reflects the composer’s terroir.

Congdon’s After Dark, the food truck park at Congdon’s Doughnuts, 1090 Post Road (Route 1) in Wells, opens for the season at 4 p.m. May 27. All Memorial Day weekend, first responders and medical professionals can get a free doughnut as a thank you for their service during the pandemic.

Many of the same pandemic safety measures used last year will be in place again this year, except that masks will only be required indoors, including in the beer garden and the bathrooms.

The park opens at 4 p.m. most days, and closes between 9 and 11 p.m. It will be open Thursdays through Sundays until June 17, when daily service begins. The park will go back to weekends only on Labor Day, then end the season on Oct. 10.

Congdon’s After Dark hosts up to 10 food trucks in evenings from late May until early October. More than 25 trucks have signed up to participate in the rotating schedule this year. To follow the daily truck lineup, go to cadfoodtrucks.com

Annemarie Ahearn, founder of the Saltwater Farm cooking school in Lincolnville, will be signing her most recent cookbook at Ada’s Portland, 642 Congress St., from 4 to 6 p.m. on Thursday. “Modern Country Cooking: Kitchen Skills and Seasonal Recipes from Saltwater Farm” (Roost Books, $35) is a guide to the essential techniques and basic skills of home cooking.

New York Times cocktail writer Robert Simonson will be at the Portland Hunt & Alpine Club, 75 Market St., from 5 to 6:30 p.m. on June 10. Simonson will be signing copies of his new book, “Mezcal + Tequila Cocktails: Mixed Drinks for the Golden Age of Agave.” Copies of the book will be available for sale, and customers can order cocktails featured in the book.

Got a favorite family seafood recipe you’d like to see in print? The organizers of a planned new Maine seafood cookbook, “Catch!,” are looking for submissions.

The cookbook will benefit the Maine Coast Fishermen’s Association. Chris Kast, owner of the Kast branding agency, is working on the project and says the idea is to share recipes from both professional chefs and home cooks “in a format that mimics (London chef/cookbook writer Yotam) Ottolenghi’s books’ look and feel. They’ll tell stories of the industry, show the new guard of fishermen and truly showcase the flavors of Maine fish that go far beyond the thought of a typical lobster boil.”

People are welcome to submit seafood-free cocktail and dessert recipes, as well, Kast said, adding that organizers hope the book is on sale by the holidays.

Fueling his ride with chocolate?

Portland chocolatier Dean Bingham rides his bike out of Key West today and hopes to reach Calais by July 1 – a total of 3,000 miles.

Bingham, owner of Dean’s Sweets, turns 75 this year, and he’s celebrating by participating in his 30th consecutive MS Bike Ride to raise money to fight multiple sclerosis. In 2001 and 2017, Bingham cycled solo across the country, from the West Coast to Portland, and raised about $10,000 each time. This year, he wants to up the ante to $30,000.

Bingham said he started doing the MS Bike Ride three decades ago in honor of his father’s nursing home roommate, a man named Charlie who had MS.

“Even with his own limited mobility, it was Charlie who kept my father mentally engaged and physically active,” Bingham said. “I felt like Charlie kept my father alive a few more years than he would have lived otherwise.”

Bingham’s wife and business partner, Kristin, will ride with him to Indian Rocks Beach, Florida, before flying home. After that, Bingham is on his own.

To support Bingham’s ride with a donation, go to his fundraising page on the MS Society website, mssociety.donordrive.com/participant/Dean-Bingham. He’s already raised just over $3,500.

Next week, you can buy a sourdough chocolate chip cookie at Onggi, order a pina colada at Cocktail Mary, slurp oysters at Eventide, or enjoy the monkfish “foie” gyoza at Sur Lie, and $1 of your bill will be donated to Stop AAPI Hate.

Stop AAPI Hate is a national coalition of three groups – the Asian Pacific Planning and Policy Council, Chinese for Affirmative Action, and the Asian American Studies Department at San Francisco State University – that have banded together to address the hate that has been directed toward Asian Americans and Pacific Islanders during the pandemic.

So far, 20 restaurants and bars, most of them in Portland, have signed up to participate in the fundraiser, which runs from May 16-22. Each place will choose one item from its menu, and every time that item is ordered the restaurant will donate $1 to Stop AAPI Hate. In addition to the businesses mentioned above, the list of participants is Tipo, Central Provisions, Little Giant, Chaval, DiMillo’s On the Water, High Roller Lobster Co., LB Kitchen, Luke’s Lobster, Yosaku, Mr. Tuna, Austin Street Brewery, Leeward, The Good Table (in Cape Elizabeth), The Honey Paw, Baharat and Copper Branch.

Two Coffee by Design coffees recently received a score of 93 from Coffee Review, an influential coffee buying guide that was the first to introduce 100-point, wine-style reviews to the coffee industry.

Both coffees, which sell for $18.50 per pound, were also added to the guide’s list of “best value coffees.”

Please check your email to confirm and complete your registration.

Use the form below to reset your password. When you’ve submitted your account email, we will send an email with a reset code.

Home Videos The WORLD of WINE – Wine News. Cheap wine, tasting notes and cooking with wine The World of Wine – May 2021 … END_OF_DOCUMENT_TOKEN_TO_BE_REPLACED

How to visit Napa Valley on a Budget. In this video Carson and I explain a few ways to enjoy Napa on the cheap. Tip and advice about how to visit Napa … END_OF_DOCUMENT_TOKEN_TO_BE_REPLACED

Home Videos Get To Know Argentina Wine | Wine Folly If you love Malbec, Argentina is your ultimate wine region. But that’s not … END_OF_DOCUMENT_TOKEN_TO_BE_REPLACED