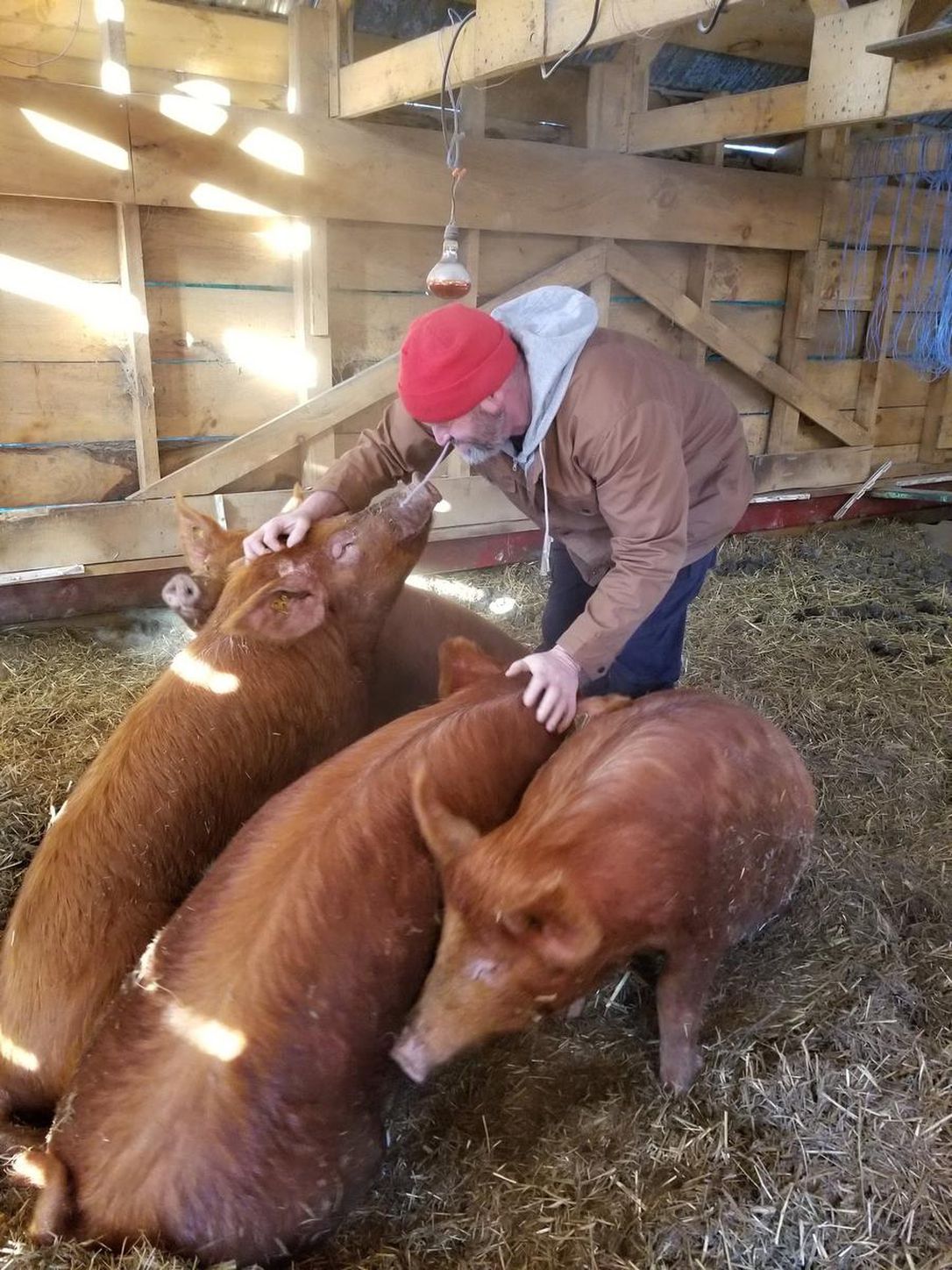 Across Canada, farms, vineyards and ranches are adopting regenerative agriculture, a system of practices meant to regenerate soil from the damages of conventional farming, and draw carbon out of the air.

Canadian farmers and advocates for the small but growing movement say the next pieces of the puzzle are consumer awareness and policy.

What is regenerative agriculture?

The purpose of regenerative agriculture is to regenerate soil instead of degenerate it the way conventional farming does. Done correctly, the regenerated lands should also draw carbon from the air and hold it, or sequester it, in the soil. Farmers and advocates say this could help offset emissions created by the conventional agriculture sector.

Brooks White, of Borderland Agriculture in Manitoba, describes regenerative agriculture as five pillars that work in harmony: the use of no-till practices, meaning the soil is not turned over by equipment; the increased diversity of crops; the use of cover crops to protect soil and draw in carbon; the integration of livestock into the farm; and the fostering of living roots to improve soil structure and health.

“The word regenerative basically means concentrating on your soil life, so that your soil gets better,” explained André Houle of Houle Farm in Curran, Ont. Regenerative agriculture often goes hand in hand with organic farming, but not always. Houle’s farm, for example, is organic, while White’s isn’t.

However, White says regenerative agriculture has enabled him to cut down on the practices that organic farming doesn’t allow, like the use of herbicides and pesticides or chemical fertilizer.

For many farmers, the switch to regenerative agriculture stems from concern about climate.

A third-generation farmer near Ottawa, Houle made the decision to go organic and regenerative in 2018 after the farm had been operating conventionally for around 30 years, growing only corn and soybeans.

The switch “had been building in me for a few years,” said Houle. After doing some research, the proverbial straw that broke the camel’s back was a presentation by the non-profit organization Regeneration Canada at their annual Living Soil Symposium.

Conventional farming had, over 30 years, made Houle’s soil compact, dry and void of life. He needed bigger, stronger equipment to work it than was needed decades before.

“The more you look into it, the more you can’t believe what you did before. It’s really an eye-opener,” said Houle. He began implementing crop rotation, cover crops and livestock, diversified his crops, and eliminated herbicides and pesticides.

Within three years, Houle has seen radical changes in the soil and the farm overall. Worms are coming back, he said, as are the butterflies he remembers from when he was younger.

This kind of shift is exactly what Regeneration Canada founder Gabrielle Bastien is trying to spark in farmers across Canada.

The organization was founded in 2017 to promote soil regeneration in order to mitigate climate change and foster healthy food systems, said Bastien.

The Living Soil Symposium, which runs Feb. 22-26 online this year, is one of the initiatives the organization is running to help spread the word — not only among farmers, but among consumers and policy-makers. Another initiative is their new interactive map, which plots regenerative farms across Canada.

But that doesn’t mean these practices are new.

Houle and White are implementing practices that older generations used, even their own families on the very land they now farm.

White has also looked back even further and learned from the way wild bison used to roam. He started mimicking those natural patterns with his bison, over time creating a healthy root system, he said.

Over the years they have been able to increase the number of animals they feed on the same piece of land, he said — the practices have improved the land’s health, and his economic output.

The economic benefits of going regenerative

In fact, White didn’t begin using regenerative practices because of the environment.

A fifth-generation farmer who grew up on a typical Western prairie grain farm, White “stumbled” into regenerative practices, as he puts it, “out of economic necessity.”

White’s father was a “pioneer” of no-till farming in the 1980s, he said. When White returned from school to the farm, he decided to bring in bison, almost 20 years ago. Slowly, like putting a puzzle together, they began implementing more regenerative practices, he said.

For example, in 2011, the farm suffered a flood that rendered more than 2,000 hectares unusable for the usual seeding. But the bison still needed to eat, so later in the summer when things got a bit dryer, White seeded some cover crops on part of the land as an emergency food source.

The next year, the swaths of land planted with cover crops had recovered from the flooding and were good enough to be seeded with cash crops. The rest of the land was still damaged from the flood and unusable.

Now, every year they plant a certain number of hectares with cover crops and nothing else, a process known as crop rotation. That allows the soil to rest and recover. They also implemented more variety in what they grow, making the farm less vulnerable to large-scale losses.

All these decisions have made the farm more economically viable, said White.

For Houle, too, the economic benefit is obvious.

After years of working a full-time job while farming, in recent years he’s been able to cut down on his hours, and expects to soon be only farming.

He’s not buying chemicals anymore, or buying seed every year since he started saving his own. He gets more of a premium for his product, and he’s using much less equipment and gas.

“It costs you nothing, really, to put it in the ground, except for the labour and your machines,” said Houle. “You get less of a crop, but the crop is much higher quality.”

White thinks regenerative agriculture as a movement is growing. But for it to change at a larger scale, especially on the largest farms in Canada, it needs to be economically driven, he said.

“The best way for that economic incentive to happen is for people to ask for their food to be grown this way,” he said.

Ann Sperling, of Sperling Vineyards in Kelowna, B.C., and Southbrook Vineyards in Niagara-on-the-Lake, Ont., agrees with White that in order to make regenerative agriculture the norm, consumers need to be on board.

Some people, including Sperling, think policy is a big part of this. Sperling thinks farms that are proven to be sequestering carbon should get a credit as an incentive, for example.

In Canada, farmers who want to label their food as organic have to go through a certification process, which involves inspections of their farms and practices. That way, if consumers see something with “organic” on the label, they can trust that the product was made under a certain set of rules.

But farmers are divided on whether this would work for regenerative agriculture.

Sperling thinks that, at some point, some kind of required certification would be helpful. But right now it’s more important to spread awareness, she said.

Bastien noted that there are two schools of thought when it comes to certification. One option is to audit practices, like organic certification. But others say it’s better to monitor outcomes, such as through carbon levels and soil health, to prove that regeneration is actually happening.

There are a number of regenerative certification programs that already exist in North America that use one or the other approach, but unlike organic certification, none of them is required in Canada in order for a farmer to call their farm regenerative.

Part of that consumer demand goes beyond the grocery store and into restaurant kitchens.

Carl Heinrich, of Toronto’s Richmond Station, has been a champion of organic and regeneratively grown food for years, even growing his own plot on The New Farm in Creemore, Ont., since 2017.

But he knows he’s in a minuscule minority, and that most consumers, restaurant owners included, choose their food with price as top priority.

“The food needs to be the same price to the consumer as conventional food,” said Heinrich.

He wants to see the regenerative movement grow faster than the local or organic movements did. For that to happen, he believes policy needs to step in. He noted that the farmers at The New Farm helped create a national alliance of farming organizations called Farmers for Climate Solutions that he hopes represents more seats at the policy table for regenerative farmers.

For Houle, the journey to regenerative agriculture has been good for his soil, good for the climate, and good for him.

He feels like he’s not only making his farm economically and environmentally sustainable, but also getting back to his roots and enjoying farming again.

Home Videos The WORLD of WINE – Wine News. Cheap wine, tasting notes and cooking with wine The World of Wine – May 2021 … END_OF_DOCUMENT_TOKEN_TO_BE_REPLACED

How to visit Napa Valley on a Budget. In this video Carson and I explain a few ways to enjoy Napa on the cheap. Tip and advice about how to visit Napa … END_OF_DOCUMENT_TOKEN_TO_BE_REPLACED

Home Videos Get To Know Argentina Wine | Wine Folly If you love Malbec, Argentina is your ultimate wine region. But that’s not … END_OF_DOCUMENT_TOKEN_TO_BE_REPLACED