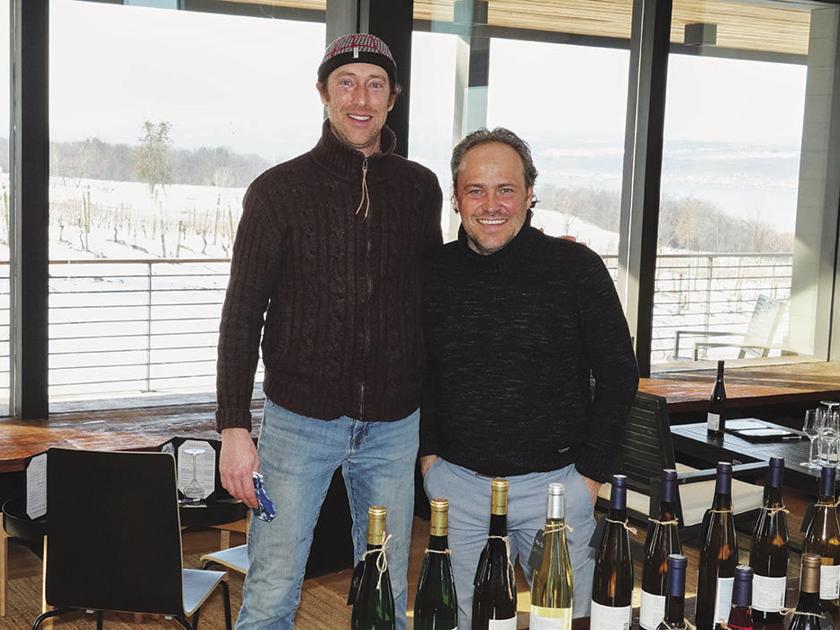 “We were struggling to find enough quality fruit to make our semi-dry riesling. Consistency was a problem,” Bynke said. A couple of difficult recent vintages had highlighted the issue. They had been co-owners of Hermann J. Wiemer Vineyard for a decade. Merwarth was Hermann Wiemer’s protegé.

Merwarth elaborated, “We were hovering around 15-16,000 cases a year and wanted to get to the 21-25,000 range. But we wanted to be able to control as much of the fruit that we purchased.”

“And there is also the idea of diversification, something that Hermann and I had talked about a lot. The original HJW vineyard is a cooler site. It takes a hit in smaller productions every few years,” added Merwarth, “To compensate for that, Hermann purchased the more protected Travis Road site (Josef and Magdalena Vineyards), knowing that it would provide more stability.”

Around the same time, Tom and Marti Macinski, owners of Standing Stone Vineyards, were contemplating the property’s future as they neared retirement age.

Merwarth said, “We know it is a very protected site with consistent production. And having tasted the wines there, we were intrigued by the opportunity.” Bynke added, “Hermann had often raved about Standing Stone for having one of the best vineyard sites in the Finger Lakes.”

They sat down with the Macinskis and struck a deal. The Macinskis were happy that Standing Stone would be passed on to good hands. The winery had about 50 acres planted, producing about 5,000 cases annually and selling grapes to other wineries such as Dr. Frank, Forge and Wiemer.

One of the first things Merwarth and Bynke did was remove the irrigation system.

“I have something about irrigation — it takes away your sense of place,” Merwarth said. “The vines had roots on the top part of the soil. They were not trained to go down to find water. In dry years, they showed stress because of the shallow roots.”

Importantly, Standing Stone has some of the oldest vinifera vines in the Finger Lakes, but Merwarth and Bynke are not sitting on those laurels.

“We have our exploratory hats on all the time,” Bynke said. “Everything is up for grabs.”

They have been studying the vineyard block by block to help determine the best grapes and practices for each location.

Merwarth said, “We pulled out seven acres of vidal, and that plot is just sitting fallow now until we figure out what should go in there. We have a few other blocks we might pull out and replant. For example, is the merlot where it belongs, or should it be elsewhere in the vineyard? That’s the kind of big picture questions we are asking.”

Added Bynke, “We have such a great site. Why grow vidal while we could grow say, pinot blanc?”

These processes could take years. By taking the long view, Merwarth and Bynke are eschewing a quick return of their investment — something few winegrowers are willing to do.

They also are big believers in bio-dynamic farming, having started with five acres of riesling in 2015 at Wiemer, followed quickly by nine more. The proof in the pudding came in 2018, when rain and gloomy conditions created one of the worst rot-ridden harvests in memory.

“Vineyards were dropping moldy fruit left and right. But in the bio block the riesling grapes were fantastic, with very little botrytis and sour rot,” Merwarth said. “Bio-dynamic creates a long-term healthy environment where the vines could withstand disease pressures.”

They proceeded with another five acres at Standing Stone. Going bio-dynamic represented another long-term investment, as the upfront costs require years of amortization to realize the benefits. And to take better control of the winemaking process, the wines are being made at the Wiemer facility, with a new state-of-the arts crush pad and an expanded winery capacity that accommodated all the Standing Stone tanks.

If you haven’t been to Standing Stone for a couple of years, you’ll be walking into a renovated tasting room. Completed in June of 2019, it is airy and spacious, with an outdoor deck for when the weather is favorable.

Results of Merwarth and Bynke’s enduring efforts can be found in the wines. Quality and consistency have improved markedly. There is now a rosé made from the saperavi grape. But their most exciting creation is a 2017 sparkler, produced from chardonnay grapes from a lower block close to the lake.

“The grapes came from old chardonnay vines planted in 1972 and 1974 for Gold Seal’s sparkling wine production. The location gets less sun and lake warming flows as the upper blocks,” said Merwarth. “We tasted it after fermentation and I wasn’t sure it should make a still wine. We decided to make a sparkling wine instead.”

The result is a remarkable sparkling wine with great purity and freshness, but without sacrificing any structure or breed. Its brightness stands in contrast to the more majestic style of its Wiemer brethren, but it impresses nonetheless with its gripping energy and tension. It’s being labeled as the 2017 Hermann J. Wiemer Vineyard “Standing Stone” Blanc de Blanc and is being sold only at the Standing Stone tasting room.

You can count on Merwarth and Bynke to continue to learn and refine their stewardship of Standing Stone. Their steadfast patience will no-doubt effect a tide of outstanding wines from this storied producer for years to come.

After spending over 30 years running the day-to-day operations of media companies, Dave Sit moved to the Finger Lakes to pursue his many passions, of which wine and writing are two. His “Wine Ranger” column runs the first weekend of every month. Contact him at flxwineranger@gmail.com.

Home Videos The WORLD of WINE – Wine News. Cheap wine, tasting notes and cooking with wine The World of Wine – May 2021 … END_OF_DOCUMENT_TOKEN_TO_BE_REPLACED

How to visit Napa Valley on a Budget. In this video Carson and I explain a few ways to enjoy Napa on the cheap. Tip and advice about how to visit Napa … END_OF_DOCUMENT_TOKEN_TO_BE_REPLACED

Home Videos Get To Know Argentina Wine | Wine Folly If you love Malbec, Argentina is your ultimate wine region. But that’s not … END_OF_DOCUMENT_TOKEN_TO_BE_REPLACED