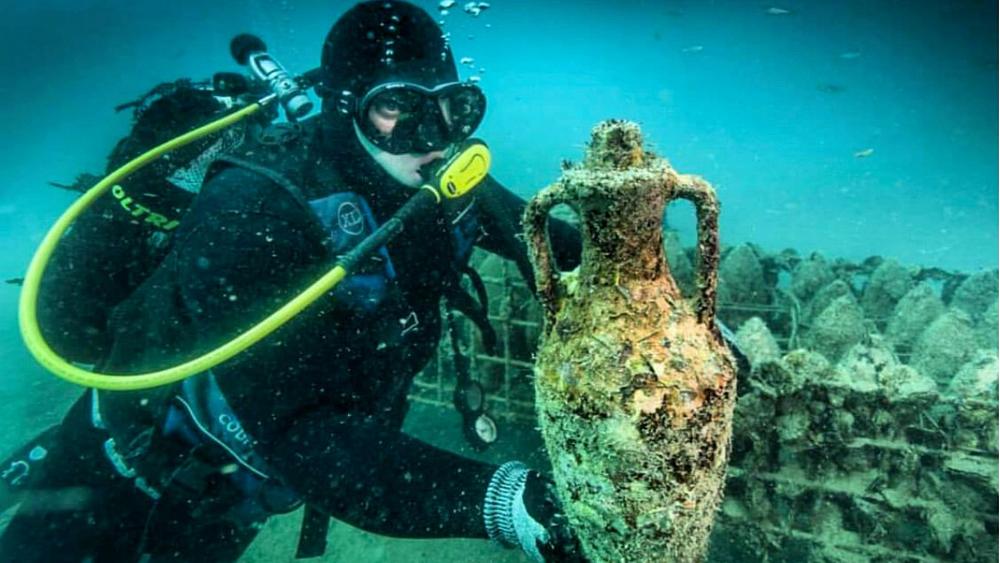 The Dalmation Coast in Croatia is known for its stunning scenery, beautiful beaches and pristine seas. But did you know it’s also home to the world’s first underwater winery?

Along the Pelješa peninsular, not far from Dubrovnik, is the small village of Drače. Here lies the world’s first and only underwater winery, nestled within a shipwreck beneath the Adriatic. Tourists are invited to scuba dive to the cellar and explore this unique approach to wine production.

The Pelješac peninsula is known for its fine vineyards, which produce world-renowned varieties of wine including Dingač – the ‘king of Croatian wine’. But since 2011, Edivo Winery has taking a different approach to maturing its wine: submerging it under the sea.

Edivo Winery is the first winery in the world to have a licence for aging wine under the sea. It’s also the only one with a patent to sell wine in amphora – an ancient type of vessel traditionally made out of ceramic.

The innovators behind Edivo Winery say that ageing wine in this way brings a unique flavour and story to their products.

“We came to the idea of making undersea wine because we love diving and everything related to the sea,” says Nives Roman, manager at Edivo Winery.

The making of ‘The Sea Mystery’

The first bottle of wine to be successfully submerged in the sea began its journey in late 2013.

The team tried several locations around the peninsula at first and the spot they have now is ideal because the temperature of the sea stays at 15 degrees celsius all year round. A stable temperature is key to making wine.

They decided to name their unique creation ‘Navis Mysterium’ meaning ‘the sea mystery’.

How is the wine made?

The wine is made with locally grown grapes, some of which are native to Croatia, such as Dignac. It’s aged in a cask for one year before being sunk to a depth of between 18-25 metres, where it will mature for another two years.

During this time, the wine is sealed in a terracotta amphora or wine bottle. The wine doesn’t see the light of day until it’s opened and poured into a glass to enjoy.

“Every amphora is a hand made product, as it has to pass a 14-day procedure of handling and cleaning once it’s taken out from the water,” explains Roman, “Corals, seashells and algae become part of the packaging design. Therefore, every amphora or every bottle becomes a unique sculptural masterpiece – a perfect souvenir with the signature of the Adriatic Sea.”

The company’s diving team monitors the winery every 14 days, in between taking tourists down there. After an in-depth (pardon the pun) guided tour of the winery, guests can resurface and enjoy a fresh seafood meal to complement their wine.

Home Videos The WORLD of WINE – Wine News. Cheap wine, tasting notes and cooking with wine The World of Wine – May 2021 … END_OF_DOCUMENT_TOKEN_TO_BE_REPLACED

How to visit Napa Valley on a Budget. In this video Carson and I explain a few ways to enjoy Napa on the cheap. Tip and advice about how to visit Napa … END_OF_DOCUMENT_TOKEN_TO_BE_REPLACED

Home Videos Get To Know Argentina Wine | Wine Folly If you love Malbec, Argentina is your ultimate wine region. But that’s not … END_OF_DOCUMENT_TOKEN_TO_BE_REPLACED