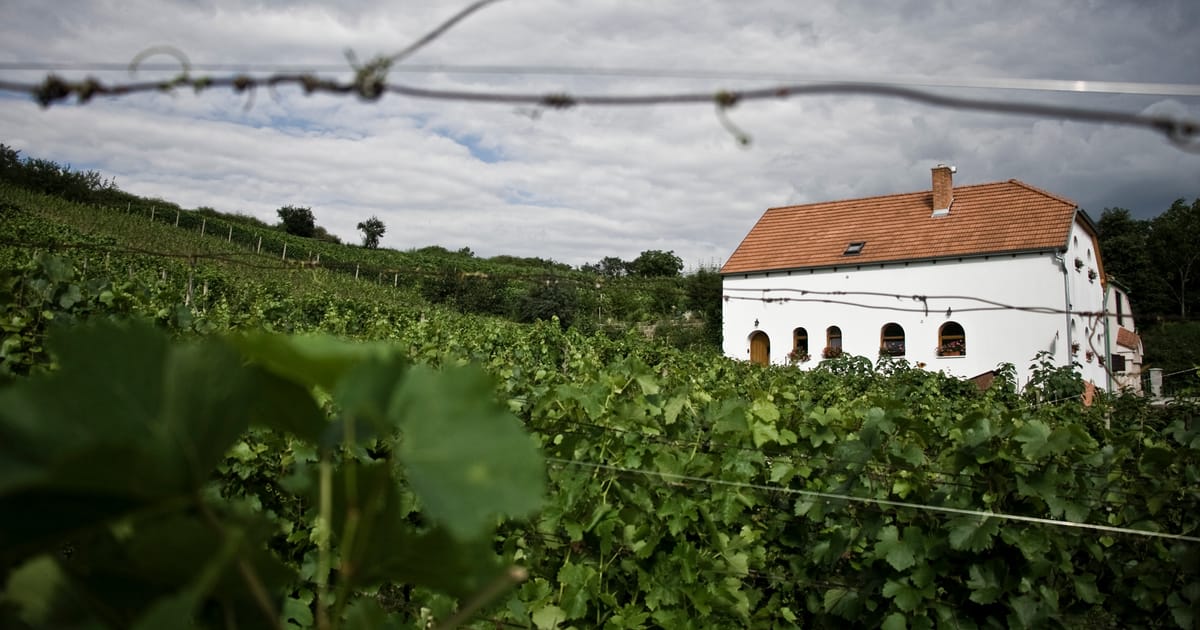 It all started with the Romans. They had built a fort near today’s village of Pasohlávky. Archeologists discovered a vine pruning knife-concrete evidence that viticulture must have been practiced there. Wine has been grown in this region close to the border with Austria ever since.

It was already well developed in the era of the Great Moravian Empire, the first Slavic state to emerge in the early Middle Ages from the 9th to 10th century. Later, viticulture became one of the main economic activities. It survived the devastation of the vineyards during the Thirty Years’ War in the 17th century. The Grape Phylloxera infestation, the vine pest that nearly destroyed vineyards all over Europe came to Moravia, too. Nevertheless, the locals learned how to save their vineyards by grafting more resistant varieties, and viticulture in this part of the Czech Republic was saved. Today, one of its main centers is in the village Mutěnice near the town of Hodonín.

Vladimír Trávník was born there and his family has lived here for many generations. He works for the local council, but first and foremost, he is a wine-grower, graduate of the Wine School in Valtice near the border with Austria. Viticulture is the main occupation and a part of the lifestyle of his family.

“I am the chairman of our local wine association: Búdy Mutěnice. We founded it thirteen years ago with the aim to recreate the national reputation that our vineyards had ever since the beginning of the 20th century. At that time, the government opened the first center where wine-growers learned how to graft our traditional wine varieties to the wines imported from America that were resistant to grape phylloxera.”

Even now, at the beginning of the third decade of the 21st century, the wine remains central to the identity of people and the South Moravian landscape:

“The spirit of wine-growing, vineyards, and viticulture is an indivisible part of our everyday life. We talk about wine all the time. When we meet at a celebration, at the pub in the evening or just stop to chat in the street. The whole communal life centers on wine. For example, we have a ritual in September that we call “closing down the mountain” since all the vineyards are on the slopes of the surrounding hills. Later on, we have the “young wine” festival when people come from all over the country. In November, there is Saint Catherine’s Feast and it goes on right until Christmas and New Year’s Eve.”

That is all interesting and bodes well for the cultural identity and traditions of people in Mutěnice. However, we live in a globalized world, common European market and that concerns wine, too. In Czech, as well as other European shops and even supermarkets and hypermarkets you have a great selection of wines from all over the world of often excellent quality. Can small Moravian producers withstand this onslaught of competing varieties?

“Moravian wines, including our Mutěnice wines, grow on the edges of the traditional European wine-growing region. We have a slightly cooler climate which is now becoming warmer which is suitable mainly for white varieties. While this brings some challenges, it is also more advantageous for certain qualities. Our wines are more aromatic, a little more acidic which makes them unique. They are certainly not boring to your taste buds. I have visited vineyards in Portugal, France, and, of course, Germany. I think they lack exactly that acidity so specific for our Moravian region.”

So, says Vladimír Trávník, head of the wine association “Mutěnické Búdy”. But then I speak to the chronicler of the village Petr Plchút. He has a slightly less enthusiastic outlook when it comes to the future of winegrowing in this part of Moravia:

“The small vineyards that our parents and my generation used to tend to and love are mainly a thing of the past. We used to produce small quantities of wine for our own consumption and maybe for a few friends. Young people today grow wine differently. Either they set up a small company and produce wine as a full-time job, do it as a second source of income, or they stop growing wine completely. The old habits of visiting your friends and neighbors in their cellars on Sunday afternoons, tasting their wine, then moving to another cellar, chatting and singing, are disappearing. The young generation prefers other modern forms of entertainment. But I hope there will be a revival of old customs. People will realize that it belongs to this part of the country. It is something that makes us different.”

Be it as it may, Petr Plchút cannot fathom living anywhere else but here in Mutěnice-the village of wine. To conclude the story of this Moravian village and its winemaking traditions I spoke to someone I have known for a long time. Petr Miklica is a semi-retired software specialist. He has lived in the industrial city of Ostrava ever since the 1960s but his roots and heart are in Mutěnice where he keeps a family vineyard to this day:

“Even though I have been living here in Ostrava for most of my life, more than half a century, actually, I still call Mutěnice my home.

For me, it is the one and only place to come back to. The vineyard I inherited is ideally situated. It is on the very end of one of the streets on the hill. There is no other „búda“ or cellar behind us. There are beautiful views. Whenever I go there, I drive to the top of the hill, stop the car, get out, and have a good look around. I can see Mutěnice and the surrounding landscape and I would not change it for anything else. I do not know how to explain or express it. My heart is there.”

And as far as wine-growing goes, Petr Miklica is sure it is there to stay:

“I think it is changing. Naturally, the commercial aspect of viticulture grows stronger and it is necessary because some people make a living growing and selling wine and it is very, very hard work. What I like though, the tradition of households making their own wine still survives, it is still rooted in the families and is passed from generation to generation. You will find a lot of small vineyards and cellars that can still grow a high-quality wine as a hobby. Their wine may be different each year, they will be able to produce different quantities of wine, and that what makes it interesting.”

“These people will often invite you to taste their wine without asking for money. That is not theirs or even my motivation. We keep producing wine in the old way and I think it is nice.”

To sum it up: the story of Moravian wine started in Roman times. Viticulture in this part of the country survived wars, changes in the political and economic system as well as pest infestations, and globalization of the wine trade. It looks that Moravian wine is here to stay.

Home Videos The WORLD of WINE – Wine News. Cheap wine, tasting notes and cooking with wine The World of Wine – May 2021 … END_OF_DOCUMENT_TOKEN_TO_BE_REPLACED

How to visit Napa Valley on a Budget. In this video Carson and I explain a few ways to enjoy Napa on the cheap. Tip and advice about how to visit Napa … END_OF_DOCUMENT_TOKEN_TO_BE_REPLACED

Home Videos Get To Know Argentina Wine | Wine Folly If you love Malbec, Argentina is your ultimate wine region. But that’s not … END_OF_DOCUMENT_TOKEN_TO_BE_REPLACED