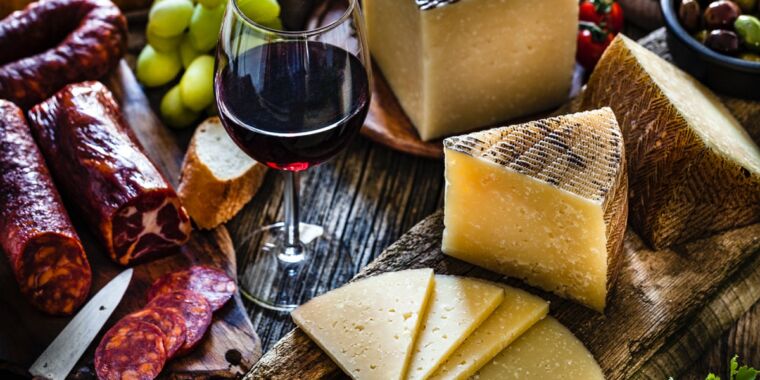 Wine aficionados know that a well-paired wine enhances the flavors of whatever foods one consumes, while a poorly paired wine does the opposite. And some foods can, in turn, influence the flavors in a wine. Is there any better accompaniment to one’s favorite cheeses and/or cured meats than a good bottle of Bordeaux or a California Cabernet? A team of French scientists specifically explored the role of interactions between the tannins in wine and fatty molecules known as lipids in foods to better understand what is happening at the molecular level with such complementary pairings, according to a recent paper published in the Journal of Agricultural and Food Chemistry.

Of course, taste in wine is highly subjective to the individual; we all have different combinations of taste receptors that influence how we perceive flavors. But some characteristics are quantifiable: bitterness, sweetness, sourness, and the body (or weight) of a wine. That’s the basis for the art and science of wine pairings in most fine-dining restaurants. The tannins in wine are polyphenolic compounds responsible for much of the bitterness and astringency in a given wine; they’re derived from the skins and stems of the grapes, or as a result of aging in oak barrels. Tannins pair well with proteins and fats, which offset their astringency and bitterness. That’s why wines with a heavier tannic component (such as Cabernet Sauvignon or Barolo) go so well with cheeses and charcuterie.

The degree of residual sugar—how much sugar remains after fermentation—determines the sweetness of a wine. Very dry wines have almost no residual sugar, while very sweet dessert-type wines, such as Sauternes or tokays, have high residual sugars. Sweeter wines pair well with spicy cuisines, for instance, because the sugar contrasts with the heat of the food. Acidity is a measure of how sour a given wine is, and there are three primary acids in wines. Malic acid confers a kind of green apple flavor; lactic acid confers a milky component; and tartaric acid will give wine additional bitter flavors. Wines that are more acidic pair with fatty, oily, rich, or salty foods because the acids will offset those qualities on the palate.

Finally, the amount of alcohol influences how much body (or weight) a wine has, and it gives a perception of heat on the palate. The higher the alcohol content (and the more tannins are present), the higher the perception of heat. Conventional wisdom has long held that white wines pair well with fish or poultry, while reds pair with heavier meats. But the reality is more complex. There are heavier, richer white wines (like chardonnay), and lighter red wines (like Beaujolais). It’s the weight, or body, of the wine that should be considered when making such a pairing.

The French scientists focused their inquiry on the tannins, particularly how these compounds impact the size and stability of fat globules (lipids) in an emulsion—a common model used in experimental food studies. So they created their own emulsions in the lab out of olive oil, water, and a phospholipid emulsifier, and they added a grape tannin called catechin. Then the researchers analyzed the emulsions with a variety of techniques, including optical microscopy, electron microscopy, and nuclear magnetic resonance spectroscopy, as well as measuring droplet size with static light scattering. Their analysis showed that the presence of the grape tannin caused larger oil droplets to form.

Next, the researchers conducted a sensory evaluation, recruiting a group of male and female students from the engineering department at the University Institute of Technology of Bordeaux in Périgueux, France. The participants were trained over a period of two weeks, learning to rank aqueous solutions of different concentrations (citric acids, caffeine, potassium aluminum sulfate), and to recognize common wine aromas, especially those relating to oils and tannins (most notably global intensity of taste, acidity, fruity, herbaceous, dried fruit, bitterness, astringency, and persistence of taste). The group sniffed five isolated aromas randomly chosen out of a possible 24 and learned to identify them.

Participants were next asked to taste various tannin solutions alone or after downing a spoonful of rapeseed, grapeseed, or olive oil. The results showed that the oils reduced the astringency of the compound, particularly the olive oil, which participants reported made the tannins taste more fruity. The French researchers concluded from all of this that tannins interact with droplets of oil in the mouth, thus making those oils less likely to bind to proteins in saliva, which causes the astringent taste.

“Dietary oils are able to decrease the astringency induced by vegetable tannins,” the authors wrote. “These findings confirm the mutual affinity between tannins and lipids as well as components of… fatty foods. Therefore, tannin-lipid interaction are now to be considered by oenologists to find the best association between too much astringent red wines and fatty foods such as cheese, meat, deli meats, or desserts, for example.”

Home Videos The WORLD of WINE – Wine News. Cheap wine, tasting notes and cooking with wine The World of Wine – May 2021 … END_OF_DOCUMENT_TOKEN_TO_BE_REPLACED

How to visit Napa Valley on a Budget. In this video Carson and I explain a few ways to enjoy Napa on the cheap. Tip and advice about how to visit Napa … END_OF_DOCUMENT_TOKEN_TO_BE_REPLACED

Home Videos Get To Know Argentina Wine | Wine Folly If you love Malbec, Argentina is your ultimate wine region. But that’s not … END_OF_DOCUMENT_TOKEN_TO_BE_REPLACED