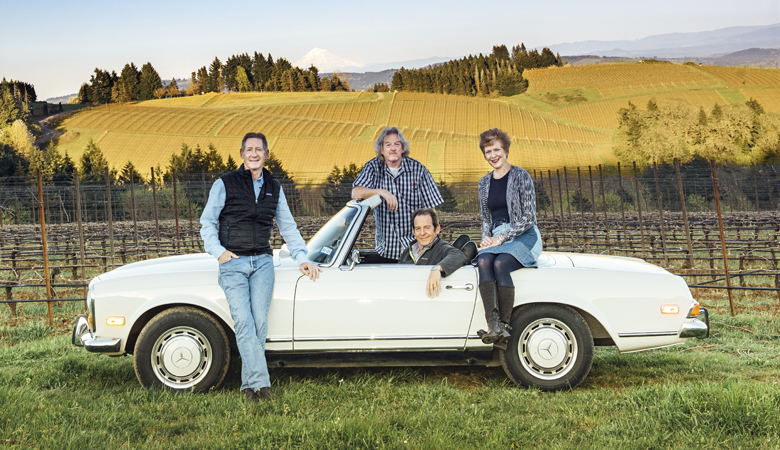 Knudsen Vineyards may not be a household name in the same way as other Oregon wine brands celebrating a golden anniversary this year, yet it has played a pivotal role in some of the region’s best-known wine success stories.

From the top of her family’s 228-acre property, Page Knudsen Cowles, the winery’s managing partner, has a commanding view of the vines that provided fruit to pioneering still and sparkling wine producers. It is also a fitting setting to reflect on what has been a second home to her and her three brothers — Colin, David and Cal Jr. — for most of their lives. Both the new tasting room and growing wine label are part of a sweet homecoming, of sorts, for them, and a way for their family’s legacy to shine even brighter.

Knudsen Vineyards was established by C. Calvert “Cal” and Julia Lee Knudsen in 1971. The couple became enamored with the wines of Champagne and Burgundy during their first trip to France in the 1960s. When they returned home to Portland, he realized how much the Willamette Valley reminded him of Burgundy.

The first whispers that Oregon could become a premium winegrowing region were already echoing around the Willamette Valley at the time. Knudsen happened upon a brochure published by a state agency mentioning the potential for growing grapes and referenced the work of people like David Lett and Dick Erath. He wrote them letters expressing his interest in starting a vineyard and eventually connected with Erath, an important figure in the Knudsen story.

In 1971, Knudsen found a former walnut orchard destroyed during the 1962 Columbus Day Storm. At 200 acres, it was far larger than what most vineyard owners were investing in at the time. “What my father brought to a very nascent industry at that point was a sense of scale,” said Knudsen Cowles. “Most people were planting what they owned, which was 5, 10 or 15 acres.” But her father had such faith in Oregon’s potential that he was willing to go big. The 50-year-old vines at Knudsen Vineyards still thrive in the Dundee Hills. ##Photo by Karthyn Elesesser

His problem was he didn’t have a practical way to plant it. Knudsen worked in the forest products industry, moving his family from Portland to Seattle for a job with Weyerhaeuser by the time he purchased the property. So he struck a deal with Erath.

“What they agreed upon was that Dick would come and live on our property, and Dad paid him to be the guy who was planting all the vines,” Knudsen Cowles said. “He built a house from a kit and raised his family there.” The opportunity allowed Erath to leave his day job and shift to full time in the wine industry.

By 1973, Erath had planted 40 acres on the property, making it the largest in the Willamette Valley at the time; one year later, Knudsen’s plantings comprised nearly 55 acres, making the vineyard the largest in Oregon — today, Knudsen farms 125 acres of vines. Erath built a winery in the basement of his house at Knudsen Vineyards, where he produced his first 216 cases of wine in 1972, under his eponymous label.

By 1974, the tanks for Erath’s winery had spilled out of the house and onto the grounds. The winery wasn’t the only venture growing: With 60 acres of grape vines beginning to mature, Knudsen and Erath could foresee a glut of fruit looming. In 1975, they formed a partnership to build a new winery on the property. The following year, Knudsen Erath Winery opened its doors.

That partnership continued until 1987, when Knudsen connected with Australians interested in producing sparkling wine in Oregon; they needed grapes. The site’s elevation range of 500 to 1,000 feet presented an ideal fit. “Dad was a Champagne fanatic,” Knudsen Cowles said, owing to his early travels in France. It didn’t take long for him to decide to work with Aussie Brian Croser and Texas native Rollin Soles with the Dundee Wine Company, known today as Argyle Winery. “He told them, ‘I would love to be your founding vineyard.’”

At that point, Knudsen and Erath parted ways, and Knudsen diverted all the fruit to the Dundee Wine Company/Argyle, which continues to receive most of the grapes. Erath bought the buildings, leased the five-acre property under them and continued to make wine there until 2006, when he sold the brand to Washington-based Chateau Ste. Michelle.

Erath wines continued production on the property after 2006, but the Knudsen family never intended for it to be a long-term arrangement.

“Back in 2006, when our father — at our urging — went in and talked to Ted Baseler (the former CEO of Chateau Ste. Michelle), he welcomed them to the property, encouraged them to do good business and told them we would not renew the lease when it expired,” recalled Knudsen Cowles. On March 31, 2020, the unusual arrangement lasting more than 30 years ended, giving the family, once again, complete dominion over their property.

What an exciting moment for the four Knudsen siblings, who’d always been dedicated to keeping the property in the family — Julia Lee passed away in 1990; Cal died in 2009. “We had known about this arrangement for 12 years, and in the last four or five, we’d been anticipating this transition and planning for the first-ever Knudsen Vineyards tasting room for our wines,” said Knudsen Cowles.

In 2012, the Knudsen family returned to winemaking, working with Argyle to produce the wine and collaborating on blending decisions for the second generation’s first label. At that time, the siblings also decided to sell grapes to a few select winemakers in addition to Argyle. The brand continues to produce bottlings of Pinot Noir, Chardonnay and rosé; the first sparkling wine is expected in 2023. Buyers can drink the wine at home or sip in The Outlook at Knudsen Vineyards, located in the renovated building previously housing the Knudsen Erath winery and tasting room.

Knudsen Cowles explained how her family originally planned to build a brand-new tasting room farther up the hill, where the view of the vineyard and surrounding valley would be even more impressive. “But the builders said, ‘Why wait a year? We could renovate the existing tasting room and you could be open as soon as a couple months later, while we build the new one,’” she said.

Ultimately, the family decided that focusing on renovating the storied building on the property made better sense. The decision soon seemed particularly prescient as the COVID-19 pandemic struck and upended the wine industry. The renovation work continued, though; the tasting room began welcoming guests last year.

Visitors to the tasting room can learn about the property’s history, make an appointment for a guided hike through the vineyard, and possibly enjoy the wines while possibly sitting at a family heirloom: a 14-foot, three-plank French walnut farm table where the Knudsen kids ate many meals as children.

“When our father passed away, it was in his second home in California,” Knudsen Cowles said. “My brothers and I looked at that table and said, ‘Someday, that’s going to be in our tasting room.’”

A family friend kept it for several years, but when the tasting room opened, the family paid to ship it back to Oregon. Knudsen Cowles shed tears of joy the day it landed in its new home. “People love being at the table,” she said. “You look at the table, and you can tell it has some stories to tell.”

These charming returns to tradition are important to the family. On Sept. 18, they hope to host a harvest party as their parents did in the 1970s. “In those days, if you came, you were given a pair of clippers and a basket and sent out to pick grapes,” remembered Knudsen Cowles. “Then you came back and drank wine.” Tickets for the celebration will be on sale later this year, barring COVID-related complications.

Some of these traditions are likely to continue into a third generation. One of Cal and Julia’s eight grandchildren is working in the wine industry in Washington. “All of (the third) generation is very interested in what’s going on,” said Knudsen Cowles. “They love that this is part of their family.”

She’s certain her parents would be proud of their children’s ongoing commitment to and stewardship of their passion project. “We know our parents would be thrilled to have us working together in the way we are. All four kids are owners, and we’re remarkably aligned in what we want to do,” she said. “We all feel so lucky to have inherited this historic vineyard, and we are very eager to share it with other people. It’s such a special place.”

There’s no doubt that for this family that’s played an important role in the history of the wine industry, the return home has been a sweet one.

Home Videos The WORLD of WINE – Wine News. Cheap wine, tasting notes and cooking with wine The World of Wine – May 2021 … END_OF_DOCUMENT_TOKEN_TO_BE_REPLACED

How to visit Napa Valley on a Budget. In this video Carson and I explain a few ways to enjoy Napa on the cheap. Tip and advice about how to visit Napa … END_OF_DOCUMENT_TOKEN_TO_BE_REPLACED

Home Videos Get To Know Argentina Wine | Wine Folly If you love Malbec, Argentina is your ultimate wine region. But that’s not … END_OF_DOCUMENT_TOKEN_TO_BE_REPLACED