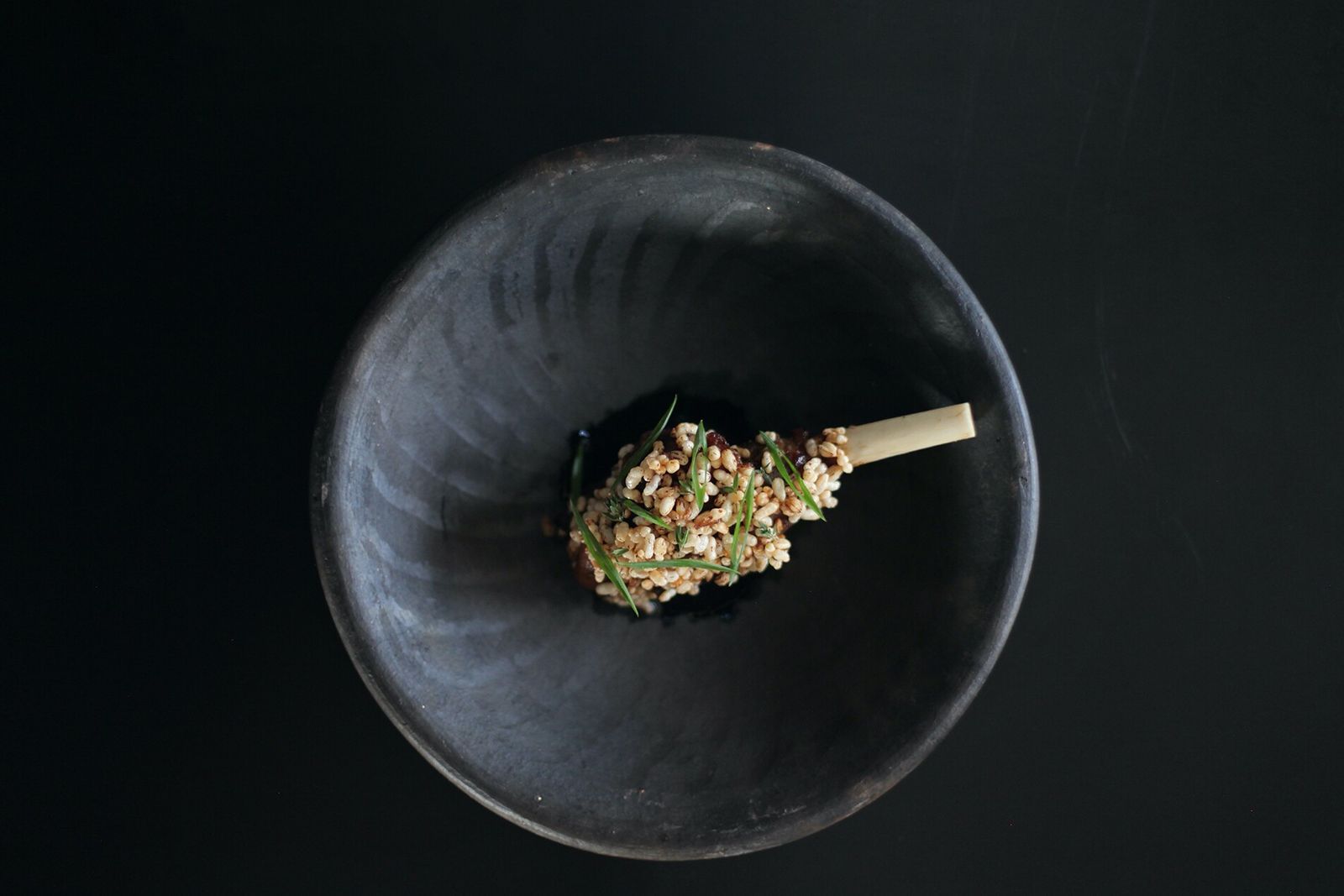 Poached prawn in banga soup. Mango sorbet with toasted coconut crumble and mint sugarcane agua fresca. Ayamase braised goat coated in puffed ofada rice. At ÌTÀN Test Kitchen in Lagos, chef Michael Elégbèdé is serving up Nigerian food in a whole new way. His goal: to raise the profile of his country’s cuisine. “I want to use my work to educate people nationally and internationally in how dynamic we are as a people through our food,” he says.

Elégbèdé’s focus is on Nigerian cooking, but his gastronomic journey began in the US, almost a decade ago. “I was at culinary school — the Culinary Institute of America, at Greystone, California — when I realised I could go into food to make a difference,” he says. “I saw other chefs using their profession to impact society and I knew I could do the same as a Nigerian.”

Learning the ropes at restaurants such as The French Laundry, in Northern California, and New York’s Eleven Madison Park (both of which have three Michelin stars) sparked in Elégbèdé a passion for haute cuisine. “Understanding the storytelling aspect [of fine dining] and being able to tell a story of my people — of the unheard, unspoken and silenced — through food was what drove me towards that form of cooking,” he says. “I always imagined being able to tell a Nigerian story through food, so it felt very natural to gravitate towards the fine dining approach.”

In order to create these narratives through cooking, Elégbèdé realised he’d need to forge a deeper connection with his country’s cuisine. “I knew a lot about the food of the Yoruba people in western Nigeria, where I’m from, but I realised that as a country with over 250 different ethnic groups, there had to be a lot more to it. I wanted to express myself as a Nigerian chef but what I was really doing was expressing myself as a Yoruba chef.”

So, in 2016, the chef bought himself a ticket back to Lagos, planning to travel around Nigeria, cook in some of its most rural places and eat with the people who lived there. He researched the landscapes, cultures and history of different regions, before setting his ambitious plans in motion. Elégbèdé travelled to every corner of the country, including areas of natural beauty, such as the Sankwala Mountains in Cross River State, bordering Cameroon.

In 2016, Michael Elégbèdé bought himself a ticket to Lagos, planning to forge a deeper connection with his country’s cuisine, travelling around Nigeria, cooking in some of its most rural places and eating with the people who lived there.

“When people talk about Nigeria, you never hear about the mountains, foothills or waterfalls,” he says. “[Through food] I wanted to talk about the diverse terrain we have in this country and how that influences the culture and what people eat.”

In the southern coastal state of Akwa Ibom, Elégbèdé fished for tilapia by canoe, while in the northwestern state of Kaduna he met a farmer who’d created a sustainable food system — the community traded produce they’d grown and reared, rather than using money. Community gatherings served as introductions to regional foods and cultures. “Everywhere I went, I talked to people who are passionate about where they are, their culture and their community,” Elégbèdé says.

He learnt about northern Nigeria’s various ethnic groups, in particular the Hausa-Fulani people, whose traditionally nomadic lifestyle has influenced their cuisine, which encompasses ingredients such as couscous, cured meats and ghee. And in areas such as Calabar, in southern Nigeria, he discovered the complexity of spices used in specialities like banga (palm nut soup), which, along with ayamase (spicy meat and pepper stew) has been reinvented for Elégbèdé’s restaurant menu.

“This diversity of ingredients, flavours and techniques, from the mountains and rainforest to fresh- and saltwater, is part of what makes Nigerian cuisine so unique,” he says. “If there’s one thing I hope I’m able to achieve with food in Nigeria, it’s getting us to see the value of our land and our culture.”

It was in 2019, after his six-month odyssey and involvement in projects such as Chef’s Manifesto — a global initiative bringing chefs together to improve the food systems of their regions — that Elégbèdé opened ÌTÀN Test Kitchen. This was swiftly followed by the creation of an agricultural collective, Abori, which connects Nigerian farmers who otherwise have no online presence with local restaurants, chefs and home cooks.

The dining room at ÌTÀN Test Kitchen, ready for service.

“What we’re doing goes beyond fine dining — we’re trying to create a sustainable food system along with an appreciation for these ingredients,” Elégbèdé says. “We’re starting to go through a culinary revolution, agriculturally as well as in the kitchen. We’re getting a lot more diversity in the ingredients being grown, and as a result there’s more for chefs to use in the kitchen. It’s a symbiotic relationship, but we still don’t have local representation of food in the way we should. That’s where ÌTÀN comes in. We’re encouraging people by saying we can cook what’s ours and cook it well.”

At the restaurant, Elégbèdé and his team curate tasting menus designed to tell a story about the cuisine of individual regions. When we speak, they’re about to launch a northern Nigerian menu, with a strong focus on the ingredients and cooking techniques of the Fulani people. Dishes include seared knife fish with dawadawa (a fermented locust bean condiment), tamarind glaze, zogale (moringa leaves) and sweet potato. Staff tell diners about the inspiration behind each dish, referencing local traditions such as building ‘groundnut pyramids’ out of groundnut sacks as a sign of wealth, a practice that was common in the first half of the 20th century.

Looking ahead, Elégbèdé hopes to open more restaurants, both nationally and abroad  — pandemic permitting. “A lot of people come to the Test Kitchen and have an almost educational experience. We want people to leave knowing a little bit more about the people and culture of Nigeria,” he says. “I came [back] here thinking the people who needed it the most were those outside the country, but I’ve realised this is necessary for Nigerians as well. The post-colonial mentality didn’t allow us to talk about our food, our culture and our history. We’ve always aspired for something that isn’t here. Now that mindset is changing.”

Boli ati epa is a popular Nigerian street food made with roasted plantain and served with peanuts or crushed pepper sauce.

How to make it: Boli ati epa recipe

This popular Nigerian street food is typically made by roasting whole plantain on a charcoal grill and serving it with peanuts or crushed pepper sauce. At ÌTÀN Test Kitchen Michael Elégbèdé creates his own peanut-citrus interpretation of this classic dish.

1   Heat a barbecue grill to 190C, place the plantains on the grill and turn as necessary, allowing them to caramelise on all sides (alternatively, use an oven grill, turning the plantains as often as needed to get an even colour); this should take around 12 mins. Remove from the heat once caramelised on the outside and soft inside.
2   Meanwhile, make the vinaigrette. Combine the roasted peanuts, orange juice, peanut oil, cayenne pepper and a pinch of salt in a blender and blitz until smooth.
3   Halve the grilled plantains lengthways and divide the pieces equally between four plates, placing them cut-side up. Top each plate with three orange segments, garnish with the basil and dress with 1 tsp of the peanut-citrus vinaigrette. Finish with a sprinkle of the crushed peanuts and a pinch of salt, then serve.

Home Videos The WORLD of WINE – Wine News. Cheap wine, tasting notes and cooking with wine The World of Wine – May 2021 … END_OF_DOCUMENT_TOKEN_TO_BE_REPLACED

How to visit Napa Valley on a Budget. In this video Carson and I explain a few ways to enjoy Napa on the cheap. Tip and advice about how to visit Napa … END_OF_DOCUMENT_TOKEN_TO_BE_REPLACED

Home Videos Get To Know Argentina Wine | Wine Folly If you love Malbec, Argentina is your ultimate wine region. But that’s not … END_OF_DOCUMENT_TOKEN_TO_BE_REPLACED