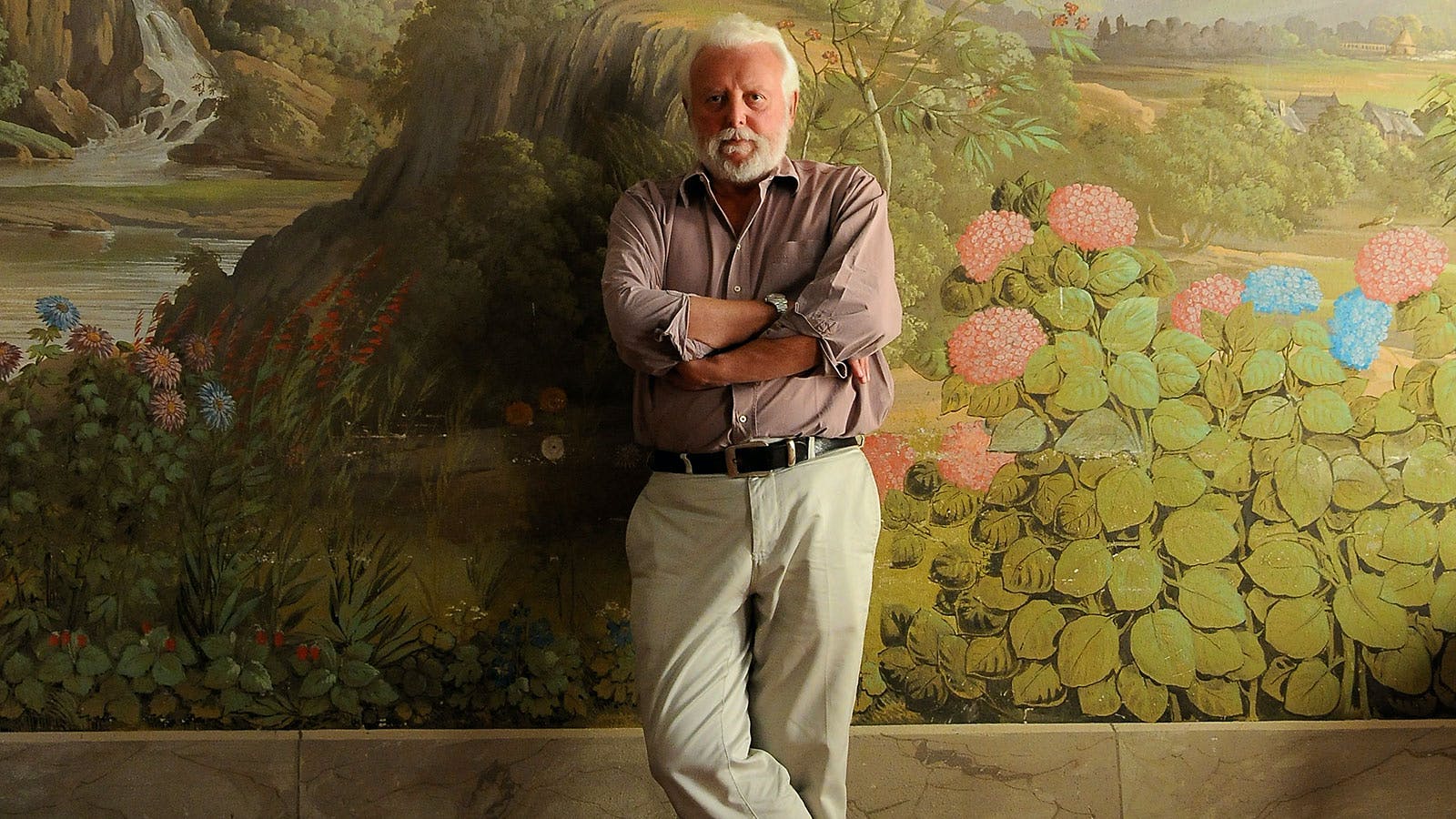 I never met Alessandro de Renzis Sonnino. And I regret that.

De Renzis Sonnino, the elegant, silver-haired and bearded Tuscan aristocrat who took over his family’s Castello Sonnino and its Chianti vineyards in Montespertoli more than 30 years ago, succumbed to COVID-19 at the beginning of this month. He was 64—still in his wine prime.

“It is a big loss for us, but also for the world of wine,” lamented Castello Sonnino enologist Renato Iaconi, who worked closely with the man many knew simply as “the Barone.” “He was the kind of figure who is disappearing from the world. A romantic figure who is not interested in business, but in caring for his estate as in the past.”

In speaking with de Renzis Sonnino’s friends over the past week, I find the same words repeatedly applied to both the man and his wines: “elegance,” “wit,” “honesty.” As he was also a great wine-loving bon vivant, who among us wouldn’t have wanted to know him?

De Renzis Sonnino, who grew up in Florence and studied art history, inherited the 360-acre Sonnino estate from an uncle in the late 1980s. Along with its 100 acres of vineyards came olive groves, grain fields and patches of forest.

The farm had once been run as an agricultural model under the turn-of-the century statesman (and two-time prime minister of Italy) Sidney Sonnino, and after World War II, it continued its production and exports to the United States. But by the 1980s, says De Renzis Sonnino’s wife, Caterina, it was “very much a ruin.”

After taking over the estate, Alessandro de Renzis Sonnino replanted vineyards, incorporating varieties such as Cabernet Sauvignon, Merlot and even Malbec along with the Sangiovese he loved. (Andrea Vierucci)

The couple applied themselves to restoring and conserving the estate’s 17th-century villa, its cellars, the historically important library of Sidney Sonnino and a medieval tower perched overlooking the rolling Florentine hills.

“Alessandro was very much an aesthetic person with a great sense of beauty,” recalls Caterina, who became an accomplished wine label designer. “In the beginning, he didn’t know much about making wine. He knew how to drink it and was a very sophisticated drinker,” she adds. “He loved French wine and Burgundy. And he fell in love with the wine from here.”

Montespertoli is Chianti’s smallest subappellation, delineated in 1997, and the Barone was a key part of its renaissance.

“As a winemaker, he was a classicist. He was a Sangiovese man,” recalls Tuscan vintner Lodovico Antinori, founder of Tenuta Biserno and previously of Ornellaia and Masseto, now owned by Frescobaldi.

From the outset, de Renzis Sonnino insisted the estate’s entry-level Chianti stick to a time-honored blend of Sangiovese and Canaiolo, with a tiny amount of white varieties (Trebbiano and Malvasia).

He also maintained the estate’s single-variety bottling, called Cantinino, made from a selection of his best Sangiovese plots.

De Renzis Sonnino’s fashion-bucking conservatism manifested in details like his refusal to abandon the winery’s pre-war concrete fermenting tanks for stainless steel. He loved the old-fashioned methods used for producing small quantities of sweet Vin Santo—drying a selection of Trebbiano and Malvasia in the farmhouse attic on straw mats, and then fermenting and aging for five years in old, small caratelli barrels (typically 50 liters) in a mix of woods, including cherry, chestnut, acacia and oak.

While modernizing its red blends, Castello Sonnino held onto classic practices such as air-drying grapes for vin santo on racks and aging the wines for years. (Courtesy of Castello Sonnino)

As he renovated the estate vineyards on the hills below the castle, the Barone studied soils and planted Cabernet Sauvignon and Merlot to complement Sangiovese in the estate’s Chianti Riserva, called Castello di Montespertoli.

He also became an eclectic blender of Tuscan and international varieties. Merlot formed the base of his flagship international-style wine, called San Leone, completed with Sangiovese and Petit Verdot. In the 1990s, he convinced the Danish winemaker Hans Vinding-Diers, of Argentina’s Bodega Noemia, to come help him plant a Malbec vineyard. The grape soon found a home in his Leone Rosso blend, along with Merlot, Cabernet and a bit of central Italy’s Ancellotta.

“Alessandro was a very transparent and elegant man, and his wines were the same,” says Beatrice Contini Bonacossi, who has run sales and marketing for her family’s Capezzana estate since the 1980s. “All the wines followed the same philosophy—a belief in the terroir. Even in the San Leone I can taste that it comes from this particular area.”

So why then are Castello Sonnino wines not as well-known or as highly priced as those of many of his pals? Those friends say it has to do with a number of things, including the relative obscurity of the Montespertoli D.O.C.G. and the Barone’s general disdain for marketing and commerce.

“When people think of Chianti, they think of Chianti Classico,” says Contini Bonacossi. “I’m sorry he left so early because I think now is a time for these other smaller areas to be discovered.”

Says Antinori: “He made some great wine but he was not proactive in promoting it. He didn’t like business. He was too much of a gentleman.”

Friends tell of a man who complained of business travel, but had no problem jumping on a plane to see a friend for dinner—as he did two years ago when Count Lucio Tasca d’Almerita told him he was preparing fresh-killed woodcock in Sicily that evening.

“He was passionate about good wines and good meals with friends,” says Tasca d’Almerita, patriarch of his family’s eponymous Sicilian wine company. “He was not interested in money.”

Though he enjoyed managing the estate more than marketing it, De Renzis Sonnino brought his elegance and wit to big events such as Vinitaly and more exclusive events such as Gucci tastings. (Alfonso Cevola)

In recent years, the Sonnino family began new projects to promote the estate by bringing in outsiders to experience it first-hand. They rented out visitor apartments and hosted a semester abroad program with American universities on subjects such as sustainable agriculture and environmental issues. Sonnino also partnered with fashion brand Gucci for its “Gucci Places” campaign and participated in co-branded tastings.

“He thought Castello Sonnino had the potential to be bigger and more important than it was,” reflects Iaconi.

Now, Caterina says, she hopes she will be joined at the estate by the couples’ two children: Virginia, 30, who works in fashion production in Rome, and Leone, 27, who studied hospitality management and has worked in Hong Kong and Berlin.

“I hope we can make it,” she says. “I think they are ready to come back and take over the legacy of their father.”

In one of his last calls with his friend Tasca d’Almerita at the beginning of this year, the Barone enthused about the near-perfect growing season in Chianti. “He said this last vintage was the best in his life,” Tasca d’Almerita recalls. “The season was beautiful, and the results were very, very good.”

“Ironic” is another word that comes up in every conversation about the man. Now, ironically, the Barone’s friends are left to taste the results of Sonnino’s beautiful season without him.

Home Videos The WORLD of WINE – Wine News. Cheap wine, tasting notes and cooking with wine The World of Wine – May 2021 … END_OF_DOCUMENT_TOKEN_TO_BE_REPLACED

How to visit Napa Valley on a Budget. In this video Carson and I explain a few ways to enjoy Napa on the cheap. Tip and advice about how to visit Napa … END_OF_DOCUMENT_TOKEN_TO_BE_REPLACED

Home Videos Get To Know Argentina Wine | Wine Folly If you love Malbec, Argentina is your ultimate wine region. But that’s not … END_OF_DOCUMENT_TOKEN_TO_BE_REPLACED