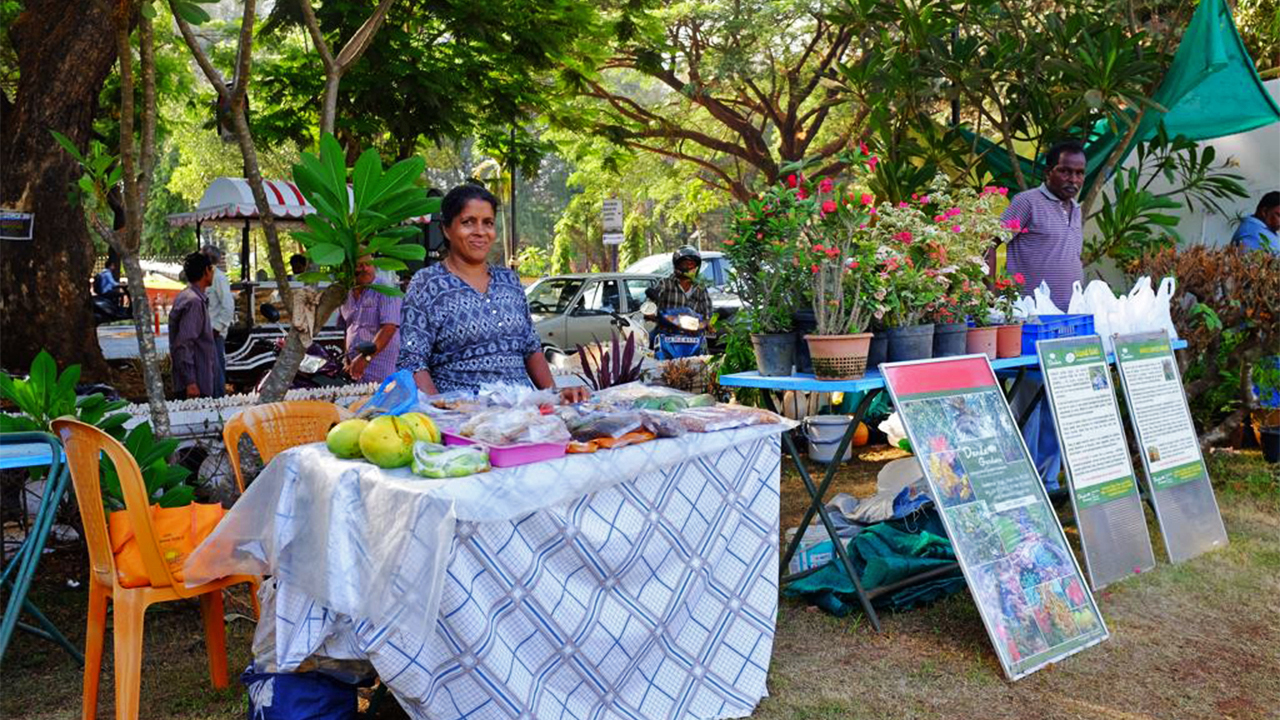 The Konkan Fruit Fest (KFF) is an initiative of Miguel Braganza and his team from Botanical Society of Goa, to preserve endangered food biodiversity by providing fruit growers a forum to market lesser-known fruits.

KFF connects farmers, government agencies such as the Indian Council for Agricultural Research (ICAR), agricultural colleges, scientists from regional fruit boards, technology and machine manufacturers, and fruit sellers, providing a space for them to exhibit their produce and technology. The event has attracted huge footfalls from tourists, locals, plant-lovers, environmentalists and other stakeholders, sparked the interest of the scientific community, generated a cottage industry for wine makers and influenced the demand and supply chain of locally grown fruits.

India accounts for 8% of total global biodiversity and has an estimated 49,000 species of plants, 4900 of which are endemic. But industrial urbanisation and land use change have put at least 10% of India’s recorded wild flora on the list of threatened species, according to a recent study.

The realities of biodiversity loss have hit the regional food basket too. A 1997 study by the ICAR discovered that 31 species of local mango varieties recorded in 1979 in Goa, are now “not found.” It thus becomes important to look at the best practices in the industry that are successful in food biodiversity preservation.

Botanical Society of Goa (BSG), instituted in 1990, is a state-based voluntary association that works at the grassroots level on planting methods, awareness and conservation. With the objective of engaging Goan citizens in the field, the society hosts a variety of programmes in collaboration with a gamut of central and state government agencies, municipalities, NGOs and civil society that promote awareness, understanding and love for plants and the environment.

Participants get access to hands-on training, demonstrations, workshops, exhibitions of domesticated plant diversity, competitions, hikes, nature trails and more. The driving force behind this change-making society has been Miguel Braganza.

Braganza worked with the Agriculture Department of Goa for 15 years as an agricultural officer and served as the Secretary of the Botanical Society of Goa (BSG) from 1996 to 2019, when he stepped down. He continues to be an executive committee member since 2019. By expanding BSG from 10 academic botanists, to 300 lay plant lovers; and on-boarding 40 nature and eco clubs of schools/ high schools, central and state agricultural agencies and prominent foundations, Braganza broad based and galvanized tree lovers.

He is the driving force behind the famous Konkan Fruit Fest, an event that revolutionised the perception of organic farming and native food in Goa and the country. He has also served as Secretary of the Organic Farmer’s Association of India (OFAI). 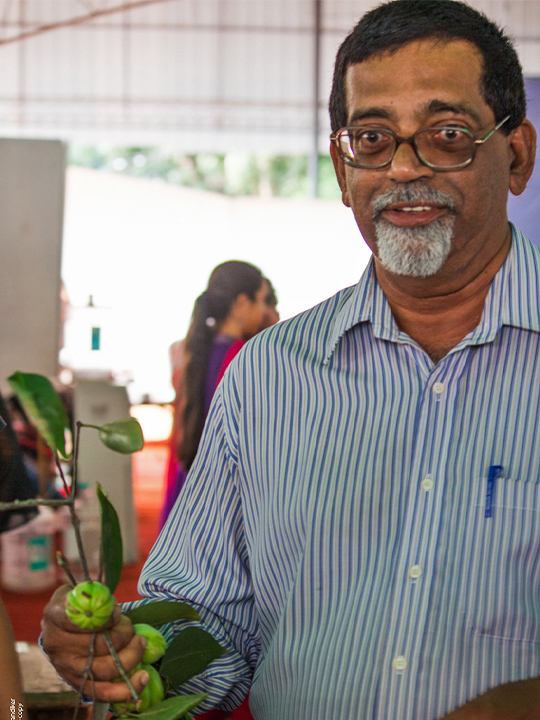 Braganza talks about Goa’s recent ecological history saying, “before mining, tourism and the realty sectors got traction by the year 2000, the traditionally-close-to-nature local Goan population was mindful of their field, plantations, crop, horticulture and plant wealth.”

Fifteen villages are named after the mango tree, two after kokum, ten after tigers, one each after the banyan, tamarind and tulsi, three after peacocks, and five after snakes, while others are named after anthills, forests, gardens, waterfalls and water bodies, the Goa State Biodiversity Strategy and Action Plan report notes.

“At the onset of each monsoon, home-owners would go plant-mad, rushing to markets to get fruit, vegetable, flower seeds, grafts, and would stick lakhs of coconut, cashew, mango, jackfruit, chickoo and other fruit saplings into the soil. By 2000, that earthy culture had taken a backseat to malls and multiplexes,” rues Braganza.

“The building and deforestation frenzy, meant that wild hillside fruits, like the charam (Cuddapah almond), jamun (Java plum), bheddsam (small jamun variant), chunna (Zunna berry, Ziziphus rugosa) and others that were a part of our food heritage, and earlier a part of our childhood hillslope summer berry hunts, were in danger of going extinct. There was a real need to arrest the drastic decline of horticultural diversity,” he explains.

Read more: Community farming in Goa emerges as a tool against land conversion

BSG and its effort in food biodiversity conservation

The BSG is always busy with new kinds of events. The pandemic hasn’t slowed down their activities. “We have been running weekly webinars on all things horticultural or green with agriculture graduates taking the lead. This way locked-down citizens, and those who have lost their jobs during this challenging year, can find inspiration for self-employment and practice cultivation right in their front or backyards,” says Braganza. Webinar topics range from growing fruit trees in pots, grafting and layering techniques to vegetable propagation, medicinal plants and garden maintenance.

BSG’s tour de force, however, is its multi-edition annual Konkan Fruit Fest launched in 2003 by Braganza and his team. The event brought together ordinary citizens and tourists, committed environmentalists and farmers. BSG’s Konkan Fruit Fest (KFF), was curated with the motto to preserve, celebrate and propagate the region’s rich storehouse of local fruits and vegetables and its corollary food heritage and culture. 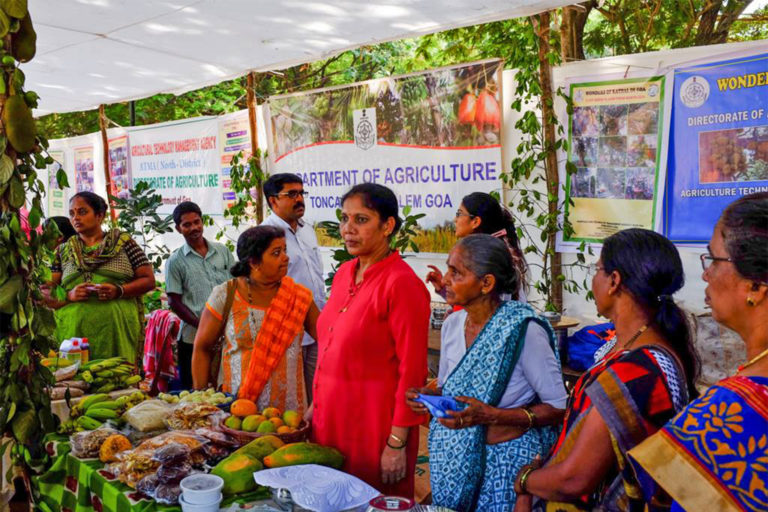 “We believe that food is a critical and an integral part of our cultural heritage. While art, music, dance, drama, museums and architecture are given importance in the discourse of cultural heritage, food is one that is often overlooked by all major stakeholders. This has led to the decline of our food heritage, especially among the young people of Goa and a drastic decline in our horticultural biodiversity. The Konkan Fruit Fest is an initiative to preserve and enhance this endangered aspect of our cultural heritage by providing fruit growers a forum to market these lesser-known fruits (jungli badam or wild almond, gulabi zaam or Malay apple, zogma or Indian plum, chaferam or coffee plum, AmBoram or white mulberry). Customers also learn about these fruits and enjoy them.”

KFF roped in a diverse stratum of 64 exhibitors in its most fruitful year.

With lots of music and fancy-dress competitions, KFF is now a street-side festival that attracts not only plant-lovers but also random walk-ins, market shoppers and curious tourists. The prizes that are sourced from the money raised from sponsors and community buy-ins, attract farmers to bring the best of their produce.

For Braganza the highlight of the fest is the knowledge exchange. He is in awe when scientists learn from farmers about the best varieties to propagate and farmers in turn learn technical solutions from the scientists. “The festival became a better enabler for information exchange than any seminar or workshop,” he says.

KFF also impacts demand and supply mechanics. “If there’s an increased awareness about the sheer multitude of delicious fruits that grow in the region, local demand will increase, local farmers will be incentivised to grow them and we will benefit from having a much wider, rich array of healthy, safely grown and nutritionally diverse fruit,” opines  farmer and festival supporter Peter Fernandes.

The other multiplier effect of KFF was scientific. Prize winning germplasm have been picked up for genetic research, development and propagation. A case in point: In 2003-2004, local farmer Prabhakar Keni’s prize-winning cashew apples were picked up by ICAR and developed and propagated as Balli 1 and Balli 2 (renamed Goa 1) varieties for the entire country.

Local farmer entrepreneurs identified superior mango germplasm from fellow farmers and began producing and marketing premium grafts. In 2013, the Central Registry of Germ Plasm registered a superior mankurad mango variety, in the name of its owner Armando Cardozo. The Cardozo mankurad was first promoted by KFF, from where it evoked scientific interest.

In 2011, the fest promoted jackfruit, spawning a fresh interest and a stand-alone jackfruit festival. KFF’s promotion of jackfruit as a potential commercial crop in 2013-14, and its demonstrations of processing and marketing of jackfruit chips, caught on with local self-help groups. Currently, 25 SHGs and one multi food processing unit make and market the product.

When in 2003, KFF awarded the ‘Best Fruit’ prize to a kokum (Garcinia indica) variety, indigenous to the Western Ghats region, it surprised many. That recognition, however, set the ball rolling, towards the first Kokum Seminar and, later, the establishment of the Western Ghats Kokum Foundation. Kokum was recognised as a fruit in 2012, by the National Horticulture Board. An export order of dried kokum to the USA, sent its price from Rs 35 per kg to a standard Rs 200 per kg. 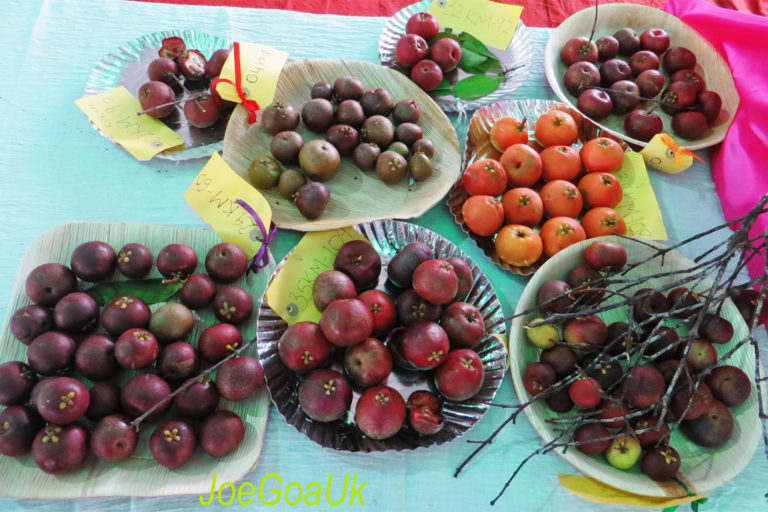 Kokum fruits on display at the Konkan Fruit Fest of 2014. Photo by Joegoauk Goa/Flickr.

Home based wine making, from varied fruits, which has now become a viable cottage industry, got an impetus at KFF. “When we first held the festival, there was just one fruit wine maker present. Several years later there are many wine makers who come together to contribute to this cottage industry,” shares Braganza. When microbiologist and wine maker John Carmo Rodrigues supplanted Pectinase for Pectin, a medicinal wine from kokum, became possible as well.

KFF is now on a pandemic-induced pause. But its Facebook page is updated with a constant stream of know-how, seed/graft sources, events and useful plant-related information. 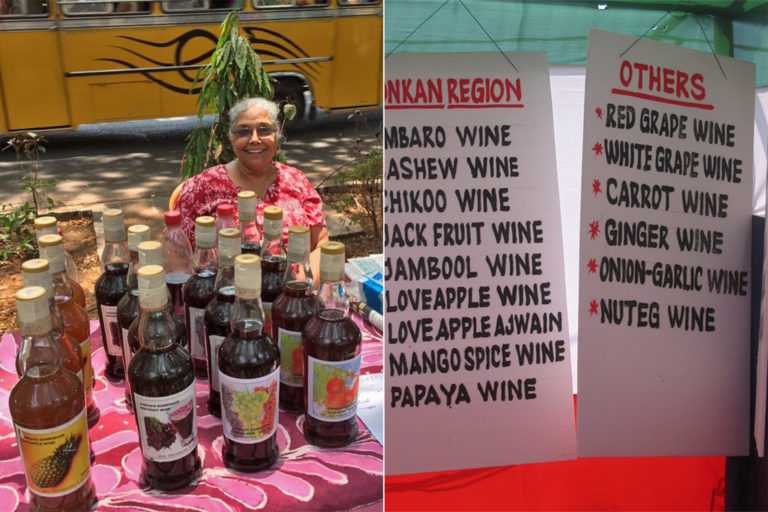 (Left) Lumina Lobo from Siolim with her homemade fruit wines at the 2015 Festival and (right) stall listing of homemade wine varieties, 2005 Festival. Photos by KFF/Facebook (left) and Frederick Noronha (right).

Home Videos The WORLD of WINE – Wine News. Cheap wine, tasting notes and cooking with wine The World of Wine – May 2021 … END_OF_DOCUMENT_TOKEN_TO_BE_REPLACED

How to visit Napa Valley on a Budget. In this video Carson and I explain a few ways to enjoy Napa on the cheap. Tip and advice about how to visit Napa … END_OF_DOCUMENT_TOKEN_TO_BE_REPLACED

Home Videos Get To Know Argentina Wine | Wine Folly If you love Malbec, Argentina is your ultimate wine region. But that’s not … END_OF_DOCUMENT_TOKEN_TO_BE_REPLACED