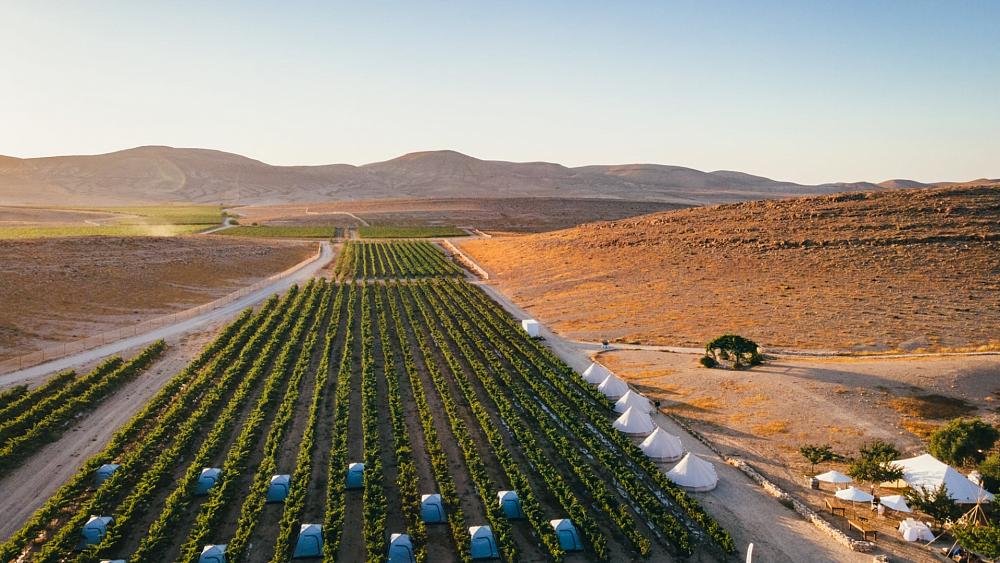 In the Negev Desert, the sun beams down onto desolate earth. The air is dry and the land arid.

But up on a mountain ridge near the town of Mitzpe Ramon, rows of vines sprout from the scorched soil – the only glimmer of green in a barren landscape.

This is no desert mirage. Those sprouts are part of an experimental vineyard where researchers are investigating how grapes can grow under the extreme conditions that dominate this region in southern Israel.

The Negev, meaning “the dry” in Hebrew, only receives about 10 centimetres of rain each year, much of which disappears in flash floods. Temperatures can reach 38 degrees Celsius during the day and drop below zero during winter nights. Still, more than two dozen wineries have sprung up in the area over the last decade or so, along with a thriving wine tourism business.

It all kicked off in 2014 with irrigation company Netafim and support from the Italian and Israeli governments.

The unique approach to wine production immediately drew attention from traditional wine-growing regions around the world, as they realised that the changing and unsettled climate posed a threat to their vines.

In 2019, wine outputs in Italy and France declined by 15 percent. In Spain, it fell by 24 percent. Those plunges were down to the unusually hot weather that baked the continent in the summer and other climatic shifts, according to the International Organisation of Vine and Wine.

“Climate change is making for more volatile weather patterns,” says Aaron Fait, a plant molecular biologist with the Ben-Gurion University, who leads research in the Negev. “The Negev can serve as a testing ground to understand how climate change will affect vines and figure out ways of adapting.”

Viticulture in the region dates back millennia. The Nabateans – a nomadic tribe that lived in the Negev area about 2,500 years ago – built terraces and small stone dams to divert water that fell during rare downpours and would grow wine grapes.

Now, Fait and his colleagues are making modern use of this ancient legacy to develop new desert-taming techniques. One consists of a trellising system to force vines to grow in a pattern, so that the leaves create a canopy casting shadow over growing clusters. Scientists are still experimenting with nets and covers of different densities and materials to limit heat exposure.

“Grapes mature and ripen faster in warmer conditions, leading to lower acidity and higher sugar levels,” explains Fait. “That upsets characteristics like the alcohol content, the drink’s colour and, ultimately, the wine’s flavour.”

Other techniques being tested include sensors that measure humidity levels in the soil and thermal cameras that track chlorophyll concentration in the vines. They also test mulching and try covering plant roots with plastic sheets to prevent evaporation – while making sure the irrigation water washes salt deep into the ground.

In addition, researchers are studying combinations of cultivars and rootstocks that can handle soil salinity better than conventional varieties do. The aim is to develop grape varieties more suited to thrive in the briny local groundwater.

“The Negev is uniquely suited to these kinds of experiments because you can control environmental variables like nowhere else in the world,” says Fait.

To test innovations, Fait and his team work with local wineries like Nana Estate. The owner, Eran Raz, fondly recalls a time when he had to deflect water from neighbours who were showering to irrigate his crops! That was over a decade ago now.

Today, Raz draws from a local aqueduct fed with desalinated seawater from the Mediterranean. He closely monitors temperature, weight, size and chemical composition of the grapes, tweaking irrigation patterns accordingly using an app on his phone – a much more modern approach.

“I have almost complete control over how my grapes grow,” said Raz. “I can even decide how big they can get.”

In the past few years, several winemakers and vineyard owners from France, Italy, Slovenia and other parts of Europe have visited the researchers in the Negev. Along with wine grapes, scientists here are cultivating cherry tomatoes, pumpkins, date palms and other staple crops that flourish in dry climates.

“European producers are worried about climate change,” says Enrico Peterlunger, who teaches viticulture at the University of Udine in Friuli, north-eastern Italy. “They are looking at the way their Israeli counterparts are dealing with harsh conditions because this is the future that awaits them.”

Europe can learn from Israel

Some wineries in his Italian region are already attempting one of the Israeli desert inventions, precise drip-irrigation systems. This is a very specific process where hoses and pipes supply a sufficient amount of water straight to each of the plant’s roots.

Until recently, European regulations banned such a practice out of fear that it would inflate yield and interfere with the terroir. Terroir is of the utmost importance in Europe, meaning how a particular region’s climate and topography influence the growth of the grapes and shape the taste of the wine.

“We introduced vineyard irrigation to the wettest region of Italy,” says Peterlunger. “This says a lot about what climate change is and how much we need to adapt viticulture to it.”

This isn’t the only winemaking area changing the make-up of its vineyards in the face of climate change either. Last year, the appellation authority in Bordeaux announced it would allow growers to use seven new grapes in their blends, in an effort to find alternative wines that can thrive in a warmer France. Franciacorta, an Italian region known for its sparkling wine, passed a similar initiative.

And it’s not just in Europe. Leading wineries in California’s Napa Valley – an area some experts speculate may get too hot for growing vines altogether – are experimenting with new varieties of grapes that are drought resistant and can better tolerate warmer temperatures.

Back in the Negev, Fait, the molecular biologist, says that he was drawn to this inhospitable and remote environment because of its history.

“People have grown grapes and drunk wine here since biblical times,” he explains. Fait is confident that it will be these antiquated traditions, alongside new technologies, that will pave the way for the future of wine.

Home Videos The WORLD of WINE – Wine News. Cheap wine, tasting notes and cooking with wine The World of Wine – May 2021 … END_OF_DOCUMENT_TOKEN_TO_BE_REPLACED

How to visit Napa Valley on a Budget. In this video Carson and I explain a few ways to enjoy Napa on the cheap. Tip and advice about how to visit Napa … END_OF_DOCUMENT_TOKEN_TO_BE_REPLACED

Home Videos Get To Know Argentina Wine | Wine Folly If you love Malbec, Argentina is your ultimate wine region. But that’s not … END_OF_DOCUMENT_TOKEN_TO_BE_REPLACED