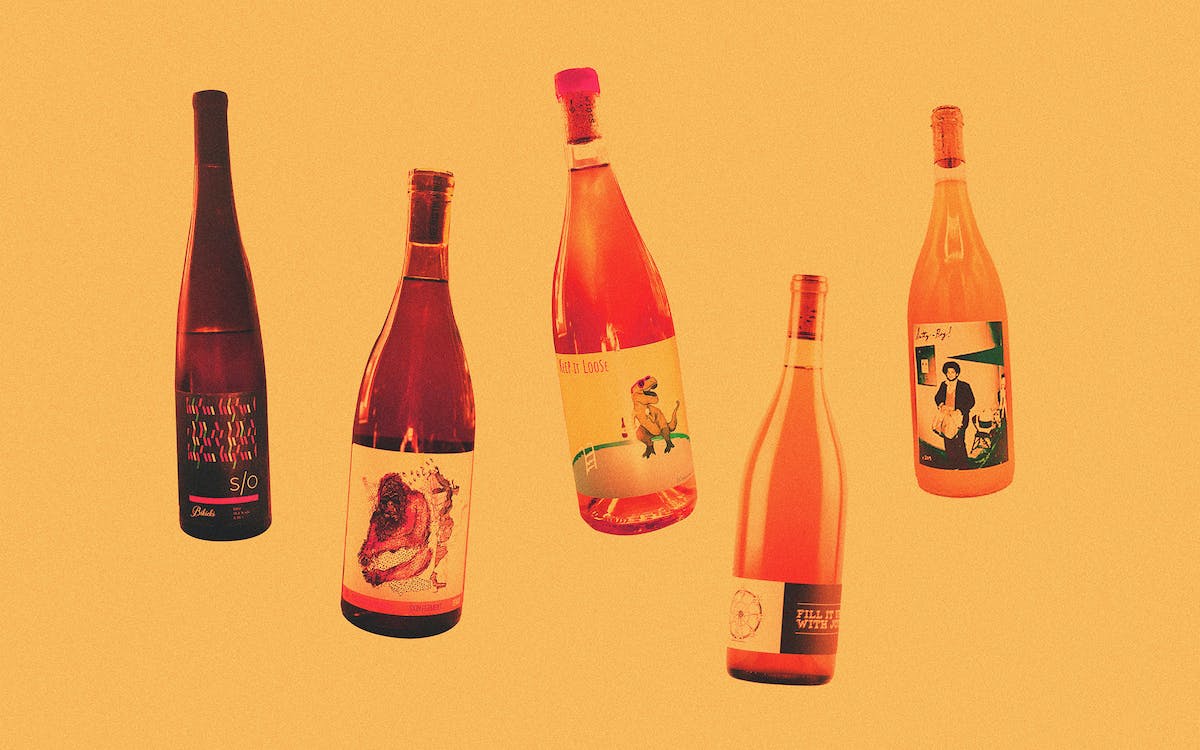 After near-complete obscurity, the oldest wines in documented history are making a comeback. Called amber wines in the country of Georgia, where they originated eight thousand years ago, orange wines, as they are often called today, are moving into some of Texas’s hottest new restaurants and wine bars. A handful of Texan wineries are even making them now.

At Bar & Garden Dallas, managing partner Julie Buckner Lane says she has seen a “steady influx of interest” in orange wine, particularly after it was featured in season two of Netflix’s Dead to Me, a dark comedy centered on two women who tank up on wine. A neighbor comes over with a bottle, and Jen, the tragicomedy’s irascible main character, responds: “What the f— is orange wine?”

To answer a question commonly asked at Bar & Garden, orange wine isn’t made from oranges. It’s simply white wine made in the manner of red wine—meaning the grapes are fermented with the skins on. They are sometimes orangish in hue, but they can also resemble a pale white wine, a rosé, or a scotch whiskey. They can be cloudy or clear; bone dry, sour, or floral. A few sparkle like a pét-nat. The term most commonly used to describe them, though, is versatile. In recent years, some of Texas’s more avant-garde restaurants and bars have started including them on wine lists.

Bujar Yuri Tukuli, the lead sommelier at Monarch, a new, ultra-swanky Italian restaurant in downtown Dallas, touts orange wines as having the “perfect profile if you’re tired of [drinking] red and white.” They can complement the flavors of most any type of cuisine, and he considers them to be the best wine pairing for Texas barbecue. Fuller orange wines with tannins, which add astringency and bitterness, contrast well with smoky meats and don’t overpower the main show with the jammy fruit of a red. The most important thing when enjoying these wines, Tukuli says, is to serve them slightly chilled—at 55 to 57 degrees, to be exact.

Tukuli has tasted over 1,500 orange wines in the past two years, including in Georgia, the birthplace of minimal-intervention winemaking, with around 100,000 wineries still existing today. Since 2015, consulting agency Marq Wine Group has collaborated with Georgian winemakers to help them expand their reach into U.S. markets. Managing partner Julie Peterson says distribution of Georgian wines has sustainably grown year after year as more Americans seek them out.

The reality, however, is that orange wines can take time to get used to—an acquired taste, perhaps. Wine writer Richard Betts wrote “Why Tecate Is Greater Than Orange Wine” for Forbes in 2013, in which he blasts the wines for resembling kombucha (it’s true). He walked away from his time in Friuli, Italy, where the style was revived in the ’90s, “feeling as though we could make those exact same orange wines in Texas. . . . Terroir be damned.” (I’ll go ahead and assume Betts hadn’t visited any Texas wineries when he wrote that dismissive line.) Another wine blogger, Ron Washam, calls orange wine the Kardashians of wine. “Please, just quietly die,” he writes.

But orange wines are not dying. Today in Texas, Vincent Henderson of Austin-based Henderson Selections supplies around forty orange wines to restaurants and bars throughout the state, which is about 3 percent of his total portfolio. He says he “does and doesn’t like them,” in part because they are hard to categorize— “they’re all from different places and taste radically different,” he says.

After pouring me a taste of a skin-fermented grüner veltliner from Wachau, Austria, he asks what I think. “I could drink a glass, but not a bottle,” I answer. “You’ve got the title of your article right there,” he jokes.

Henderson says orange wines have been trending for some time in Austin, and they’re even catching on in Marfa. He has no qualms about being quoted as saying that “Dallas is still buying boring, brand-name wine,” but Houston is “out-punching their weight” in selling orange wines.

The traction in Houston may be due to restaurants like Nancy’s Hustle, which landed on Esquire’s and Thrillist’s lists of best new restaurants in 2018. Nancy’s Hustle co-owner Sean Jensen has had at least three skin-contact wines on the menu since the restaurant’s inception in late 2017, and currently, there are two by-the-glass options along with nine bottles. Jensen includes these wines because “they are delicious and incredibly versatile for pairing with our menu.”

In Fredericksburg, Otto’s German Bistro and La Bergerie wine bar have also sold orange wines since opening in 2013 and 2017, respectively. Paula Rester Salinas, beverage director for Side Street Hospitality, which owns the two establishments, says it’s always acceptable to pour a taste when introducing orange wines, and they’re easiest to sell and explain when they have their own category on menus.

Salinas says sometimes there are issues with availability complicated by worldwide shipping issues, so they look to domestic producers instead, like Southold Farm + Cellar, a winery that moved from the North Fork of Long Island to Gillespie County, Texas, in 2017 and has been using 100 percent Texas grapes ever since. Southold’s co-owner, Regan Meador, says skin-contact whites are some of their most popular wines, and in recent years, Southold has at least doubled their production. They are presently sold out of all but one.

Meador doesn’t ever expect orange wines to become as mainstream as pinot grigio, and he kind of hopes they don’t—“I am not really a fan of any wine on that larger level of production. Essentially those things are made so people don’t have to think about what they’re drinking. Skin-contact whites force people to do the opposite—they’re much more cerebral,” he says.

Large producers are moving into the Texas market now. Gérard Bertrand, one of the biggest biodynamic wineries in the world, with more than three hundred wines in 171 countries, is in the process of launching the Orange Gold, a blend of seven grapes, mainly from the Mediterranean, fermented with skins on. It will be in Central Market and select H-E-B locations by this summer, says a company spokesperson. The winemaker’s notes describe the wine as having “an explosion of white-flower notes, candied fruits, and white pepper” on the nose, with a long finish that leaves a “delicate, bitter tip to stimulate the taste buds.” As Orange Gold hits grocery shelves across the state, Texans will soon be able to discover the taste explosion for themselves.

Waco-based wine distributor David Mayfield sees the growth of orange wines as “consumer-driven.” When he launched his business in 2012 and started importing orange wines, a lot of restaurant and bar owners echoed a common refrain: “It’s interesting, but I don’t think my customers will like it.” Now, he says the same wines that once sat on the shelf for being too expensive at $28 a bottle are selling out at $38 and up. “They sell basically on arrival,” he says.

Before dropping that much cash, folks new to orange wine might try the Lunaria Ramoro Pinot Grigio, available at most Central Markets for $16. It’s an Italian, skin-fermented pinot grigio, and tastes much like a rosé, with a note at the end that’s almost guaranteed to leave you saying aloud, “Hmm, interesting.” In establishments around the state that have started backing orange wine, look for the Nine Oaks Rkatsiteli. It’s a classic amber wine produced in Khaketi, Georgia’s biggest wine region, and it’s made with traditional methods using the country’s most popular white grape, the rkatsiteli.

As a Dallas-based wine-chugger who first discovered orange wine four years ago while visiting D.C., it does sometimes feel like I’m in a city with a lot of “boring, brand-name wine.” But the times, they are a-changin’. Texas has the terroir (critics be damned), the consumer-driven interest, and the restaurant wine lists to give oenophiles something to try when they’re tired of red and white and need something to go with the barbecue.

Home Videos The WORLD of WINE – Wine News. Cheap wine, tasting notes and cooking with wine The World of Wine – May 2021 … END_OF_DOCUMENT_TOKEN_TO_BE_REPLACED

How to visit Napa Valley on a Budget. In this video Carson and I explain a few ways to enjoy Napa on the cheap. Tip and advice about how to visit Napa … END_OF_DOCUMENT_TOKEN_TO_BE_REPLACED

Home Videos Get To Know Argentina Wine | Wine Folly If you love Malbec, Argentina is your ultimate wine region. But that’s not … END_OF_DOCUMENT_TOKEN_TO_BE_REPLACED