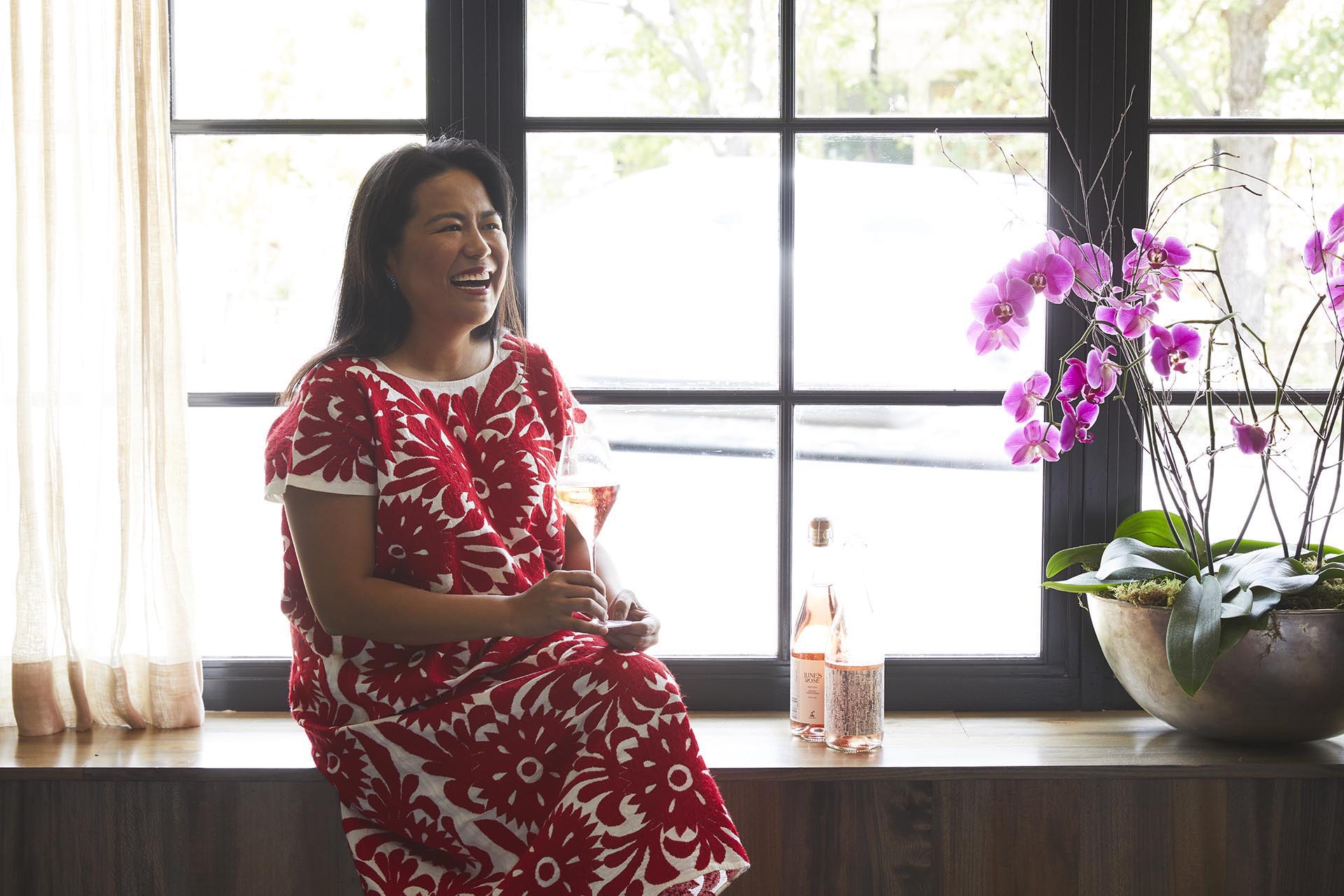 For many who grew up in the Philippines or in a Filipino household, alcohol meant beer and spirits. Wines were often considered inaccessible and expensive. Plus, there’s a misconception that Filipino food doesn’t go well with wine.

These five Filipino and Filipino-American sommeliers are helping to change that narrative in the United States. While there are challenges to being in a Western-leaning industry, these professionals also appreciate the opportunities to share their culture and heritage.

As a young girl in Cavite, Philippines, Rodil would walk to the palengke, or wet market, every morning with her grandfather, a fisherman, to choose the produce that her grandmother would later cook for them. So began her love of food.

Her mother was employed as a nurse in Dallas shortly after June’s birth. June joined her mother in Dallas after she turned 5, when her immigration papers were finalized.

As a student at the University of Texas at Austin, June worked at The Driskill, a downtown hotel. She started as a server before she quickly moved up to a sommelier.

“I fell in love with wine and how it can really enhance an experience,” she says. “Ever wanting to be a good student, I started looking into the regions, grapes and winemaking styles of the world and realized, this is my calling. Being able to study cultures, science, anthropology, history, while drinking? Sign. Me. Up.”

She spent the next 20 years in Austin’s hospitality industry, as she opened a dozen restaurants and earned her master sommelier certification. She’s one of just 28 female master sommeliers in the U.S.

“Being able to study cultures, science, anthropology, history, while drinking? Sign. Me. Up.” —June Rodil MS

In 2019, she moved to Houston and is now partner at Goodnight Hospitality, which operates Montrose Cheese & Wine, Rosie Cannonball and March.

“I learned to work hard and push through anything from my mother,” says Rodil. “She’s amazing and still pulls 16-hour shifts at the hospital to this day.”

Born in Flushing, Queens, Cabrales grew up in Glen Rock, New Jersey, where her parents kept a cabinet of hard spirits. Beer was the drink of choice whenever her father, originally from Pagsanjan, Laguna in the Philippines, got together with her uncles. But the proximity of a Bottle King shop, coupled with her fascination on “the finer things in life,” piqued her interest in wine.

It led her to pursue an intensive sommelier program at New York City’s International Culinary Center in 2011. Not long after, she was offered an assistant sommelier position at Morrell & Company’s Manhattan wine bar, where she worked her way up to beverage director and general manager. She expanded the by-the-glass wine list to 150 options.

Due to Covid-19, the bar closed in April 2020. Shortly after, Anna lead Instagram Live sessions, initially as a catharsis from the pandemic. She then formed Sommation, a series where wine professionals come together weekly discuss topics like cultural appropriation and racism in hospitality.

Early this year, she was appointed as education & innovation manager at Independence Wine and Spirits, an importer and distributor.

Even though she has faced questions from disbelieving customers who question how she is a sommelier, Anna does not mind difficult situations.

“I think that if you approach things with a positive light, you can turn things around,” she says. “If you’re not bringing yourself to the table, how else will they know?”

In 2014, de Pano started as a sommelier at Eleven Madison Park, recipient of three Michelin stars. She wore boots with three-inch heels during service, while many of her colleagues were in orthopedic shoes.

“I had to make myself look competent and trustworthy selling bottles of wine, despite possibly injuring myself in the long run,” she says. “Guests were used to having a white male assisting them with their wines. It wasn’t enough that I knew my stuff. Whatever needed to be done, I did.”

She grew up in a strict, non-drinking Catholic family in Manila. She got into wine in the early 2000s because she liked “fancy” things. “There had to be something more to alcohol than the three brands of beer and neon-colored, flaming, ultra-sweet cocktails available in Manila,” she says.

“Some people have advantages over you, but they do not have your perspective.” —Paula de Pano

She moved to New York in 2008 to study at the Culinary Institute of America, where she learned a valuable lesson. “If you don’t speak up, you don’t get heard,” she says.

Her outlook has evolved in other ways, too.

“I’m more aware that my difference isn’t a hindrance, but an advantage,” she says. “I am able to pivot my service style, or how I can connect with guests since I am familiar with Eastern and Western social norms. Some people have advantages over you, but they do not have your perspective.”

She still wears three-inch heels, but the Fearrington’s carpeted floors have made them more forgiving. “Old habits die hard,” she says with a laugh.

“I had no idea what things like rhubarb, quince, pomegranate or even something as basic as apricots tasted like,” says Santos, who grew up in Manila. “I set out to farmer’s markets to smell and taste everything I could. I talked to anyone who would give me the time of day and kept on asking questions.”

A career in finance in the U.S. opened him to the world of restaurant dining. While he lived in San Francisco, his curiosity prompted him to visit northern California wineries every weekend.

Today, he’s the head sommelier at Acquerello, which has earned two Michelin stars. When the restaurant was closed for in-person dining due to the pandemic, he kept busy by hosting virtual tastings. He also worked with private clients to help them with inventory management and cellar valuation, trained cabin servers on wine education for a private jet company and spent time with his family.

He believes his Filipino upbringing is a professional asset.

“Growing up in the Philippines, with its different fruits and flavors, allows me to easily identify things like lansones, dalandan, kamias, langka and kalamay in wines,” he says. He hopes this perspective “translates into a more fun and richer experience for my guests.”

“Beer was definitely the drink of choice, and that was just the culture there,” he says of his childhood in Manila. He worked in retail in Japan for a few years before he moved to the U.S. in 2013. It was then that he began to develop interest in wine.

“It was a small gateway to the rest of the world that I had been wanting to learn more about,” says Faelnar.

He applied for an assistant sommelier role at a New York City restaurant, but with no prior experience, he didn’t get the job.

“I instead took on a more beginner role in the restaurant and quickly rose through the ranks, from polishing in the back to eventually landing at the bar making cocktails,” he says.

Things moved quickly from there. He enrolled in the intensive sommelier program at the International Culinary Center. Soon after, joined The Nomad as sommelier. Since 2018, Faelnar has been wine director at Atomix and Atoboy, each of which has earned two Michelin stars.

“There are always challenges when people decide to move and live elsewhere,” he says. He’s one of few Filipino or Asian-American sommeliers in the U.S.

“Being Filipino or Asian in the wine world can simply mean that you might be in the minority, and to many people, that can be disconcerting,” he says. “I was always comfortable being different in the room.”

Home Videos The WORLD of WINE – Wine News. Cheap wine, tasting notes and cooking with wine The World of Wine – May 2021 … END_OF_DOCUMENT_TOKEN_TO_BE_REPLACED

How to visit Napa Valley on a Budget. In this video Carson and I explain a few ways to enjoy Napa on the cheap. Tip and advice about how to visit Napa … END_OF_DOCUMENT_TOKEN_TO_BE_REPLACED

Home Videos Get To Know Argentina Wine | Wine Folly If you love Malbec, Argentina is your ultimate wine region. But that’s not … END_OF_DOCUMENT_TOKEN_TO_BE_REPLACED