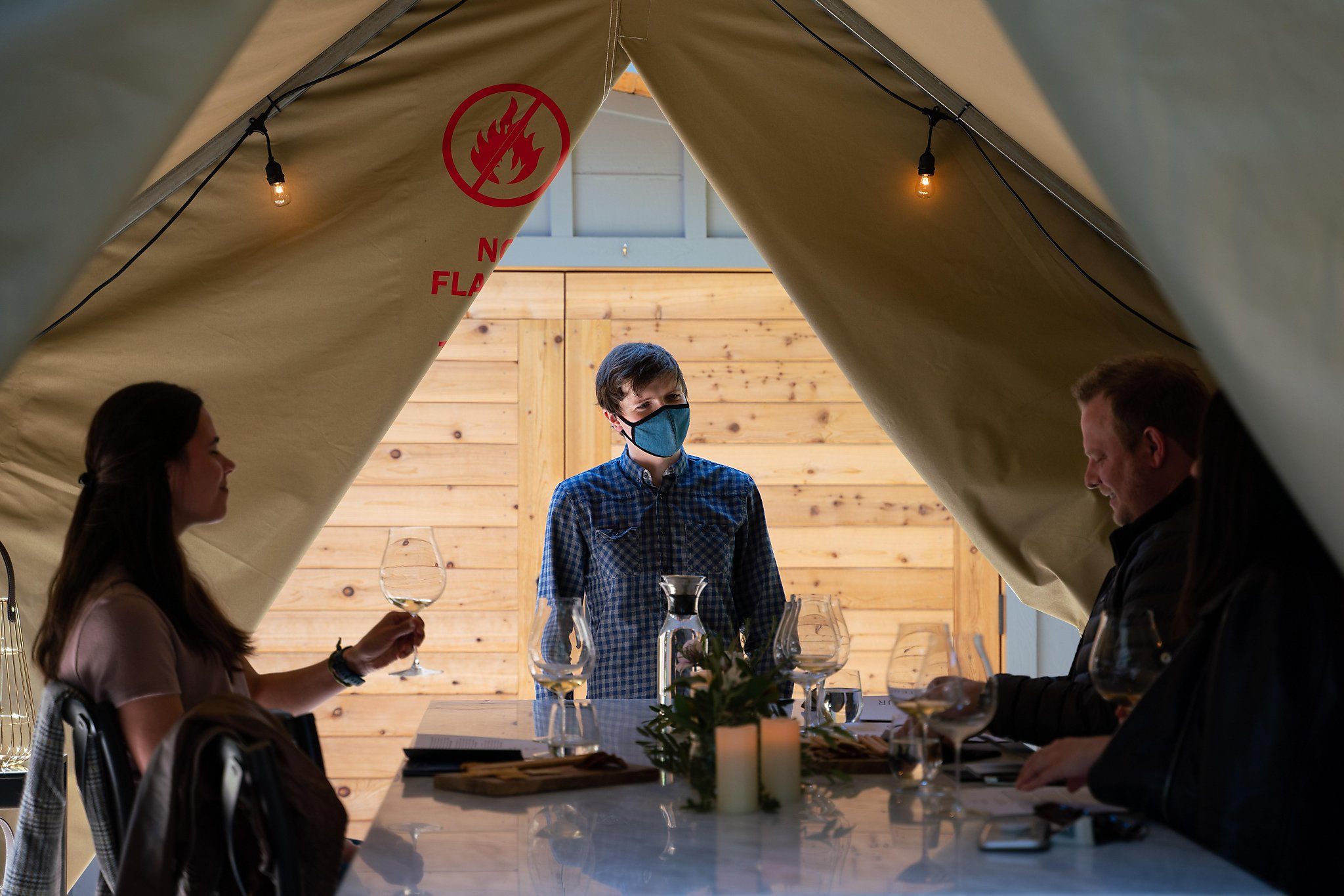 Sonoma County, which has been stuck in the most restrictive tier of California’s reopening system since it was established in August, will soon see some relief.

The county will advance from the purple tier into the less restrictive red tier on Sunday, based on a recent modification to the state’s reopening blueprint that incorporates vaccine equity, California officials said Friday. That means Sonoma County restaurants can open for indoor dining for the first time in six months. Museums and gyms can also move activities inside, and movie theaters can reopen.

Contra Costa County, the only other Bay Area county that is currently in the purple tier, also will move to red on Sunday.

Sonoma County stands alone as the only place in the region that never moved out of the purple tier, even in last fall’s lull between surges. San Francisco dropped all the way to the yellow tier — the least restrictive — while Sonoma County remained purple, largely due to stubbornly high cases among residents in hard-hit communities.

But even as public health and business leaders said they were eager to finally move out of the most restrictive tier, after a year of ups and downs not everyone in the county is scrambling to reopen.

“We’re not going to rush to open indoors even though we’d be able to,” said Chad Richard, co-owner of Furthermore Wines in Sebastopol.

Several wineries in Sonoma County built outdoor spaces for visitors during the pandemic and if the weather remains amiable, there may not be an immediate demand for indoor seating at tasting rooms. Richard said his winery’s expanded outdoor seating has left it with roughly the same capacity for visitors that it had pre-pandemic with indoor seating.

“We’ll reevaluate on having people inside once our staff is fully vaccinated,” Richard said.

There are four tiers in California’s reopening blueprint, based on how widespread the virus is. The move to red opens the door to advancing quickly through the rest of the tiers, allowing increased business reopenings and loosening restrictions on activities.

The tier assignments are based on a county’s daily coronavirus cases per 100,000 residents and its positive test rate. Earlier this month, California officials said they would adjust the blueprint structure to make it easier for counties to move to less restrictive tiers based on how well the state does at vaccinating people living in low-income and otherwise disadvantaged communities that have had the highest rates of infection throughout the pandemic.

On Friday, the state announced that it had administered 2 million doses to people in those communities, which triggered the new tier structure. Based on the new metrics, 13 counties statewide moved from the purple to red tier, including Sonoma and Contra Costa counties; Los Angeles County also moved to red. The tier assignments go into effect on Sunday.

The tier metrics will loosen again once the state reaches 4 million doses. Each county’s progression could also be jeopardized if case and positive rates start climbing back up.

Both Contra Costa and Sonoma county officials said they would align with the state’s reopening guidelines once they move to the red tier. Previously, some counties had kept in place certain restrictions as extra caution to prevent increases in cases.

“Given that we have been in the purple tier for all this time, we will align with the state,” said Dr. Sundari Mase, the Sonoma County health officer. “We don’t see any red flags.”

Last week, she urged county businesses to implement randomized staff testing to prepare for the resumption of some in-person business operations.

More than 70 small businesses in Sonoma County have shuttered during the pandemic, the Economic Development Board says. The county also was hammered by the worst fire seasons in California history, which further impacted local wineries and other businesses.

But many business owners in the county said they plan to take a conservative approach to reopening.

The owners of Valley Bar & Bottle, a restaurant in downtown Sonoma, said they “feel very good” about the prospect of moving into the red tier, but that they wouldn’t be opening for indoor dining right away.

“We want to make sure our staff has had their second dose before we decrease any safety precautions,” said co-owner Emma Lipp, noting that all of the restaurant’s staff have had at least one vaccine dose so far. “We have a lot of outdoor space, and being indoors just doesn’t feel quite right to us yet.”

Richard that he’s noticed wine tasters’ tolerance for inclement weather has increased since the pandemic began.

“People used to be sensitive to being outside even when it was just a little cloudy,” Richard said. “But now, if it starts to rain, nobody flinches.”

Julie Rothberg, president of Medlock Ames Winery in Healdsburg, said the move into the red tier would probably make visitors feel more comfortable with the idea of going wine tasting.

“With the positive news about all adults being offered vaccines by the end of May, we’ve seen a groundswell of interest in people near and far wanting to spend time in Wine Country,” said Rothberg. “Moving into the red tier will continue to increase the comfort level across the board.”

Although Medlock Ames’ tasting room in Healdsburg’s Alexander Valley has lots of outdoor space, Rothberg said they looked forward to adding indoor wine tastings once they’re cleared by the county.

Mase said she hoped Sonoma County residents would see the red tier move as “the light at the end of the tunnel.”

“We have been in the purple since day one of the blueprint,” she said. “This is going to bring a huge amount of optimism for our residents.”

Home Videos The WORLD of WINE – Wine News. Cheap wine, tasting notes and cooking with wine The World of Wine – May 2021 … END_OF_DOCUMENT_TOKEN_TO_BE_REPLACED

How to visit Napa Valley on a Budget. In this video Carson and I explain a few ways to enjoy Napa on the cheap. Tip and advice about how to visit Napa … END_OF_DOCUMENT_TOKEN_TO_BE_REPLACED

Home Videos Get To Know Argentina Wine | Wine Folly If you love Malbec, Argentina is your ultimate wine region. But that’s not … END_OF_DOCUMENT_TOKEN_TO_BE_REPLACED