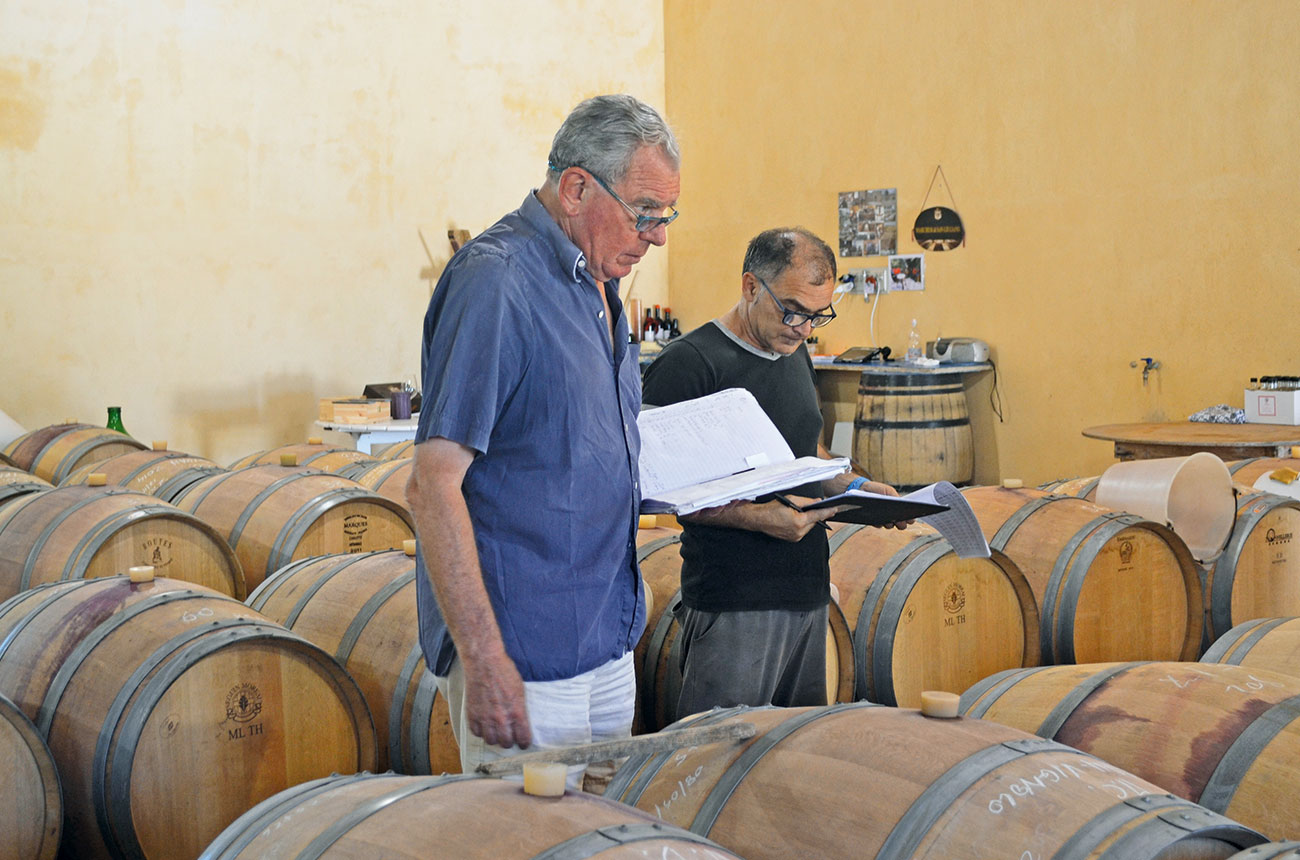 In a winery line-up, you wouldn’t pick out Peter Vinding-Diers as the winemaker. This tall, confident man, still dashing in his late seventies, looks as though he’d rather be striding across moorland with dogs in tow than pruning vines.

It was a glimpse of the vineyards of Beaune that first made him think that making wine could be his future. At that time, he probably never dreamed that in the years ahead he would be acclaimed as an oenological wizard, especially for his work in isolating yeasts and solving other winemaking conundrums; nor that he would play a major role as an early ‘flying winemaker’ and in reviving the ancient traditions of Tokaj in Hungary.

His patrician family had always bought and drunk fine Bordeaux, so wine was already in his veins. ‘But my father and grandfather were so Francophile, even living half the year in France, that I knew I had to learn the craft elsewhere. And that’s what took me to South Africa.’ He seemed to fall into jobs and assignments, working in a laboratory in Stellenbosch and later being a more hands-on winemaker at the splendid Rustenberg estate.

‘Sooner or later, France tugged me back. In the 1970s, I did a spell at Château Loudenne in Médoc, where the director Martin Bamford played host to many of the big names in Bordeaux, whom I got to know. Len Evans and other Australian investors were keen to become involved in Bordeaux. They had their eye on Yquem, but it wasn’t for sale, so they ended up buying Château Rahoul in the Graves, which I ran and where we lived.’

Peter Vinding-Diers at a glance

‘I became interested in the role of yeasts in giving wines a particular identity. It just seemed evident to me that wines such as Léoville Las Cases and Léoville Poyferré, from adjoining vineyards and made in adjacent cellars, were so different and distinctive in large part because of their yeast population. Bordeaux University’s Professor Denis Dubourdieu was soon convinced, even though his boss Pascal Ribereau-Gayon had always advised châteaux to use selected yeasts.’

In 1985, he vinified a batch of Semillon from Rahoul in three tanks, one with yeast from Lynch-Bages, the second with yeast from Angludet, and the third using the Rahoul strain. The wines turned out differently and were shown at tastings to the grandees of Bordeaux. The point was made. Dubourdieu told Peter Sisseck (Vinding-Diers’ nephew): ‘Peter Vinding-Diers intuitively saw and understood what had taken me 20 years to prove scientifically.’

This battle was decisively won, and today most prestigious wines are made using native or ambient yeasts, although Vinding-Diers admits that if he were producing mass-volume wines, he would stick to the safety of commercial yeasts.

His French sojourn was complicated by issues with investors, banks, bureaucrats and, occasionally, personnel. There was a period when he and Len Evans fell out. He bought Domaine de la Grave and then Château de Landiras in 1988, both in the Graves. His fresh white wines, so different from the drab and sulphury tank-aged examples available then, soon found favour in international markets.

He also championed Semillon as a grape variety at Rahoul and at Landiras. Although the variety of choice for Bordeaux’s sweet wines such as Sauternes, it was less popular than Sauvignon Blanc for dry wines. Semillon could indeed be heavy, but then Sauvignon could be strident and grassy. Sauvignon had its crusader in André Lurton (of Châteaux La Louvière and Couhins-Lurton, among others), which balanced Vinding-Diers’ enthusiasm for Semillon. He also planted the exotic Sauvignon Gris, which later became a significant part of the blends at top estates such as Smith Haut Lafitte in Pessac-Léognan.

The Landiras adventure came to an end in the mid-1990s, when the international market began switching to red wines. He has had a few other regrets. He was offered Château Grand-Puy-Lacoste in Pauillac before the Borie family bought it in 1978, though it would have been a financial stretch. ‘I admit, too, that the one place I would have loved to make wine, but never did so, is Burgundy. It was the sight of those vineyards around Beaune that long ago sparked my interest in wine.’

Setbacks never diminished his zest for adventure. In 1989, he helped plant the Hacienda Monasterio vineyard in Ribera del Duero, then a remote and little-known region of northwest Spain. Preoccupied with winemaking in Bordeaux and other places, Vinding-Diers passed the baton to his nephew Peter Sisseck. Not long after, Sisseck turned up at Landiras with a sample of red wine from the Spanish region, which the Vinding-Diers children christened ‘Pingus’. One of Europe’s most admired, and costly, wines was born.

Also in 1989, Vinding-Diers and wine writer Hugh Johnson explored the possibility of reviving the great wines of Tokaj and founded The Royal Tokaji Wine Company. Today few appreciate what a heroic enterprise this was. More than 40 years of communism had come close to destroying vineyards and wine traditions that dated back centuries. Royal Tokaji and other international investors had to start from scratch.

‘Yes, it was tough. None of the growers and winemakers would tell us anything. Nothing. Here and there we found people who could suggest how the great wines of the past had been made, and we explored maps and archives and discovered the ancient classification of Tokaj.’ By the mid-1990s, the region was again producing great sweet wines.

He also worked as a consultant, where his negotiations began with an insistence that the clients furnish him and Susie with first-class air tickets. ‘It wasn’t greed. It’s because I knew they would only take me seriously if I came at a price. The real lure was the intellectual challenge of working, for example, in such a different environment as Brazil, where I found the wine producers were open and friendly. Bulgaria, too, was beginning to exploit its potential. Of course there were language problems, and I knew that as soon as I got back on the plane to Europe, all my advice would be ignored! The worst experiences were in Hungary, where winemakers were stubborn and wouldn’t even clean their barrels.’

One aspect of Vinding-Diers’ life that has always puzzled me is his peripatetic nature. At Landiras, he and his English wife Susie kept open house, or so it seemed, and I spent quite a few evenings feasting in that lovely château. Peter is a proud Dane from a very well-connected family, and the house was full of his books and family furniture and heirlooms. But a few years later, the couple would be in Hungary or Rome, still with a 10,000-volume library in tow.

‘For some years, I’ve been here in Sicily, making Syrah and other wines at Montecarrubo near Siracusa. That’s our last stop. I suppose I’ve wandered so much because I like fresh challenges, and also because I’m a loner. It hasn’t always been an easy ride, but having my possessions with me helps me feel at home. And, of course, Susie has been an absolute rock through some very difficult times.’

After his Hungarian period – and he still retains a fine manor house in the Tokaj region – he turned his hand to wines in Italy. Curiously, Tuscany never appealed to him.

‘I didn’t like the grapes and I didn’t like many of the people, who often seemed secretive. I found Sicily the opposite. Andrea Franchetti of the Trinoro estate in Tuscany was a good friend, and he wanted to start making wines on Etna. We explored the area together, but we found we had different ideas. I wanted to find some parcels of very old vines, while Andrea, typically, wanted to start a venture on a grand scale. And he did, with his Passopisciaro label. I was involved at the beginning, but I realised this wasn’t what I really wanted to do. But our collaboration was fun while it lasted.

‘Eventually I landed up at the property we called Montecarrubo because of the carob trees on the estate. We were planting on soils that had never seen vines, so we farmed organically from the start.

‘I love it here. The local people are curious and helpful, and I’ve been free to do exactly what I want, which is to focus on Syrah in Sicily. I’d planted Nero d’Avola, Sicily’s signature grape, in another site, but to me it seems a second-rate grape. But Syrah and Petit Verdot give great results here.’

Settled but still pushing on

Surveying the contemporary wine world, he remains optimistic. ‘It’s become snobbish where it once was humble. Owners of great châteaux have changed to become managers for corporations. But there’s always room for people who genuinely love wine, and let’s hope they persist.’

The peripatetic Viking is now settled and content among his vineyards and olive groves, part of a generous community of family, friends, neighbours and employees. At long last, Peter Vinding-Diers feels at home, and as passionate about winemaking as he was half a century ago.

Viking in the Vineyard by Peter Vinding-Diers is published by Académie du Vin Library – Buy here. Decanter readers can save £5 with the code DECANTER21.

Home Videos The WORLD of WINE – Wine News. Cheap wine, tasting notes and cooking with wine The World of Wine – May 2021 … END_OF_DOCUMENT_TOKEN_TO_BE_REPLACED

How to visit Napa Valley on a Budget. In this video Carson and I explain a few ways to enjoy Napa on the cheap. Tip and advice about how to visit Napa … END_OF_DOCUMENT_TOKEN_TO_BE_REPLACED

Home Videos Get To Know Argentina Wine | Wine Folly If you love Malbec, Argentina is your ultimate wine region. But that’s not … END_OF_DOCUMENT_TOKEN_TO_BE_REPLACED