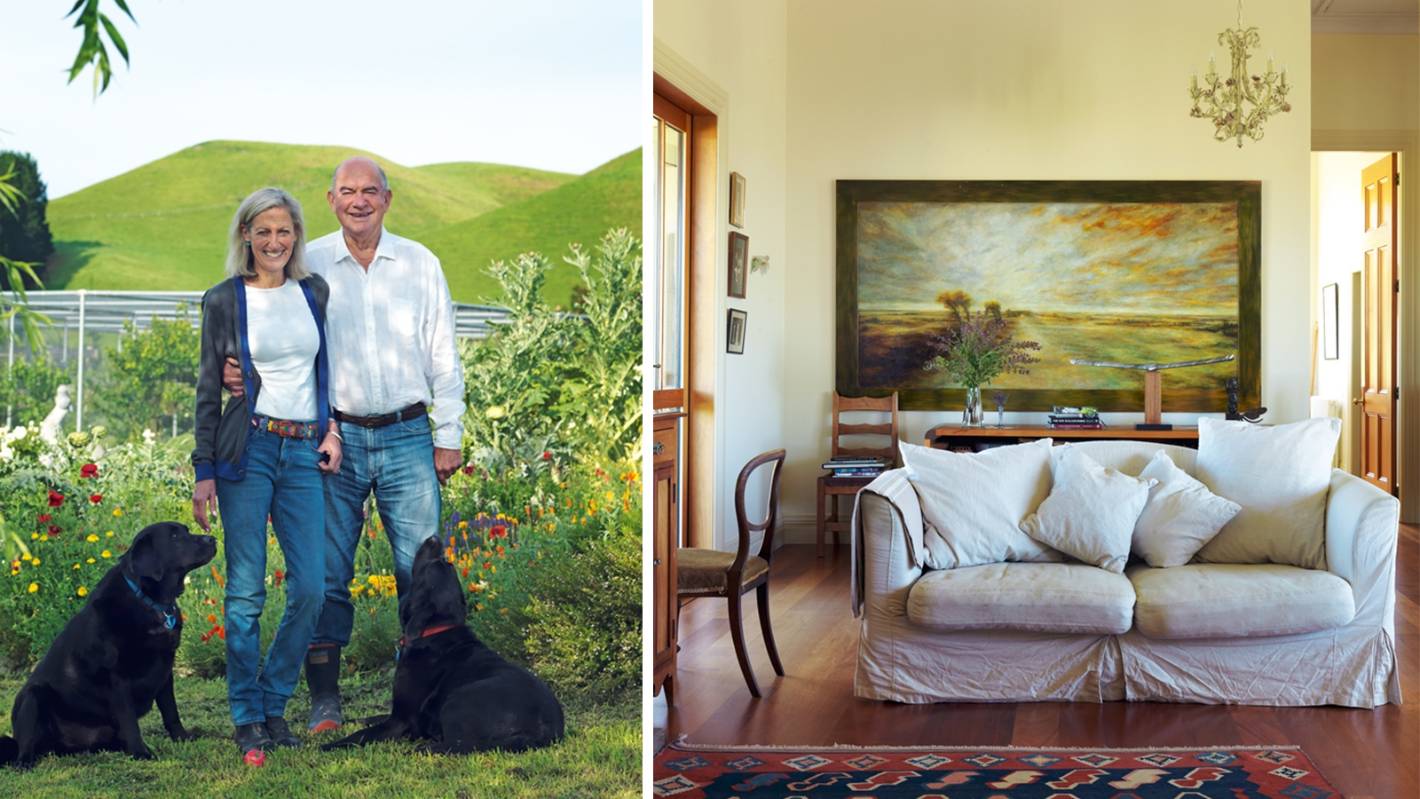 Rambling gardens, a simple farmhouse, grapevines and animals – this Wairarapa couple have it sorted

The searingly hot summers and frosty winters that make Te Muna Rd near Martinborough so suited to growing grapes haven’t always supported the efforts of Deborah Coddington and Colin Carruthers to develop the house and garden at the centre of their vineyard.

In the early days, the ferocious north-westerlies that sometimes rip through the Te Muna Valley would tear out freshly planted shrubs and seedlings, and send them hurtling across the vines. But 14 years on, the simple country villa Deborah and Colin built is now engulfed with drifts of perennials, herbs and roses, creating a dreamy setting amid the orderly green vines.

Colin, a Wellington QC, had lived in a Sir Ian Athfield-designed house in the capital for more than 30 years, and originally intended for another Athfield-designed house to be built on the 11.5ha of farmland he bought on which to grow grapes in 1996. But the idea of a contemporary house sitting in this quiet rural setting was supplanted by the vision of a more modest farmhouse, inspired by a house built by his family in the 19th century at Maungātua, Taieri, in Otago.

READ MORE:
* Mid-century Taranaki sensation gets a faithful makeover
* Perfumier bought her Wellington home from the other side of the world
* Auckland property transformed from farmland to fabulous

Named Redbank, that house was also the source of the name he gave to the vineyard property he and Deborah moved to permanently in 2007, three years after they first met. For Deborah it was something of a homecoming. She lived in Wairarapa in the 1970s and 80s when her children were young, and with her then partner, Alister Taylor, planted the first commercial grapevines in the Martinborough area, an experience she writes about in her 2015 book The Good Life on Te Muna Road.

Since moving back to Martinborough with Colin she has immersed herself in the community, and in 2019 opened The Martinborough Bookshop, rounding out a life that has revolved around words. “It seemed a natural progression given I’ve been in writing and publishing all my life,” says the award-winning journalist and newspaper columnist, former Act MP and author.

The motto for her shop is “books you’ll want to keep”, and it’s an adage she and Colin live by, as the piles of books throughout their home attest. “I’ve always loved the concept of books as furniture,” Deborah quips.

While Deborah’s days are centred around her shop, garden and animals, Colin continues to commute over the winding Remutaka Hill four days a week to work in Wellington. He bought the land for the Te Muna Valley vineyard as a joint venture with his son James who trained as a viticulturist and winemaker after his planned career as a pilot was cut short when he was diagnosed with bipolar disorder.

James and Colin chose the land and pinot noir grape stock together, but sadly James took his own life before the first vines were planted. James’ signature features on Te Muna Valley’s James pinot noir and pinot gris labels, as well as the Redbank logo.

Those first pinot noir vines have since been joined by other varietals and this year marks the vineyard’s 19th vintage. Since 2013 all of their wines have been produced on-site in a purpose-built winery that sits close to the house. Contract winemaker Simon Groves was engaged in 2013, but Colin and Deborah still immerse themselves in the winemaking process and are hands-on at vintage time.

Their vision was always for the house to be comfortable but utilitarian. One room wide with verandahs facing north and south, it has a large living space that connects two gables at either end, and just one bedroom and a bathroom.

Visiting friends and family stay in a stand-alone guest house inspired by the simple form of weatherboard shearers’ quarters and attached to what was the original winery building. Here, a couple of canvas tents are now permanently set up for indoor glamping when extra beds are needed. The compound is reminiscent of a traditional rural homestead setting, where service buildings were nestled within range of the farmhouse.

Deborah says she and Colin planned the house “down to the last nail” with design input from Ken Raynes of Focus Projects from Tauherenīkau. It was Ken who suggested the 4m-high ceilings to ensure a light and airy interior and to counter the impact of the shady verandahs either side of the house. Inside, the neutral palette of materials defers to the bold landscape and the explosion of summer colour in the surrounding gardens.

Although the garden’s rambling appearance appears entirely natural, in the early years Deborah and Colin planned the layout in detail and toiled to build up planting beds. A small orchard, caged to protect fruit from pecking birds, nestles against the warmest side of the house. Seven tonnes of concrete pavers formed paths and a rear terrace that is softened by perennials which doggedly self-seed in the cracks. On summer evenings meals are shared here around a weathered outdoor table that soaks up the last of the sun.

Cooking is another of Deborah’s passions; she ran a restaurant for a time in the Bay of Islands and combines flavours with the same intuitive approach as she gardens. There are parallels with winemaking too. “Growing grapes and making wine is a combination of two things I love – gardening and cooking,” she says.

With the hard work behind them, Colin and Deborah are now enjoying all that they have created – and living the good life on Te Muna Rd.

Best time of day: First light, walking with the dogs up to feed the horses, then the chooks and ducks, planning my day at the shop. (Deborah)

Favourite time of year: The lushness of spring when your hard work in the garden is rewarded. (Deborah)

That time during spring as the pruned vines show off their new shoots in lovely ordered rows of light green. (Colin)

A key lesson learned while establishing the garden: Learn from your disasters, not your success – just like business. (Deborah)

Don’t try to do it in the Wairarapa wind – or your wife will have a meltdown. (Colin)

Favourite way to entertain: All out, as we did for Colin’s 70th birthday. A huge marquee in the vines, 300 guests ranging from Supreme Court judges to Thai vineyard workers. Winston Peters was the guest speaker, [the late] Grant Chilcott the crooner, a bagpiper piped in the birthday cake, and a surprise guest from America had everyone in tears. It took me two years to organise. (Deborah)

Home Videos The WORLD of WINE – Wine News. Cheap wine, tasting notes and cooking with wine The World of Wine – May 2021 … END_OF_DOCUMENT_TOKEN_TO_BE_REPLACED

How to visit Napa Valley on a Budget. In this video Carson and I explain a few ways to enjoy Napa on the cheap. Tip and advice about how to visit Napa … END_OF_DOCUMENT_TOKEN_TO_BE_REPLACED

Home Videos Get To Know Argentina Wine | Wine Folly If you love Malbec, Argentina is your ultimate wine region. But that’s not … END_OF_DOCUMENT_TOKEN_TO_BE_REPLACED