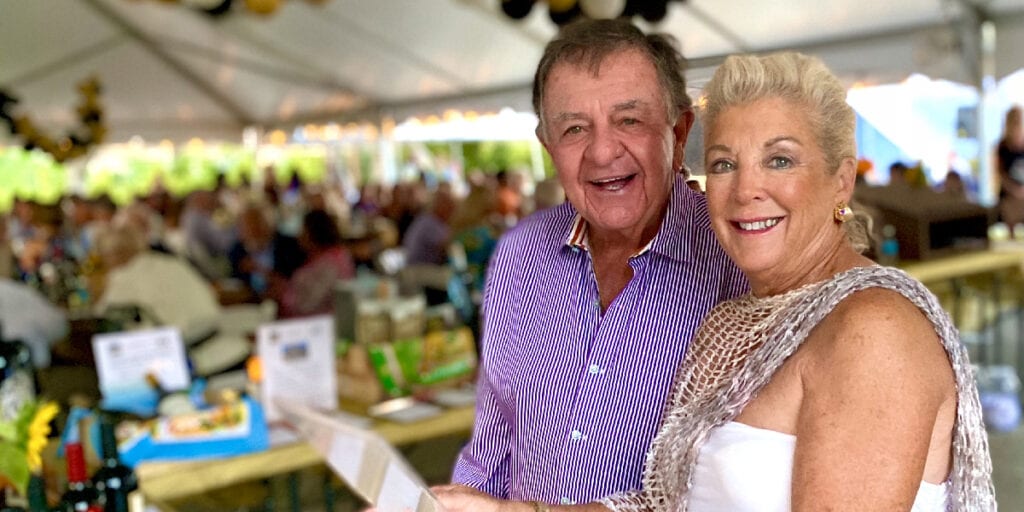 By all measures the inaugural Wine Tasting and Auction event for the Marco Island Center for the Arts, held Thursday evening, April 1, under a huge tent in the art center’s parking lot, was an unqualified success.

While everyone was dressed to impress, many attendees were more proud of the three-inch band aid on their arm than their impressive threads. The feeling of freedom that the COVID vaccine is giving many area residents was evident among the happy crowd.

“It was a huge success,” beamed Hyla Crane, executive director of Marco Island Center for the Arts. “It exceeded all expectations. It was extraordinary.”

Crane is all too aware of the affect COVID has had on her organization. She noticed a big difference in the crowd at Thursday’s event compared to the organization’s annual gala, held in January.

“There was clearly a big change from January to April,” Crane said. “People have been vaccinated. The desire to get out has just really pushed people. January, when we had our gala, there were people who would buy a table who wouldn’t come because they were not going out. There was definitely a different feel and willingness to participate. It was an amazing crowd of people.”

One could describe the crowd at the sold-out event as extremely social. Several times during the program speakers had to plead with the crowd to quiet down so they could be heard. But the giddy crowd also let their wallets and purses speak for them. Crane was extremely pleased with the evening.

“I can’t tell you a specific number,” Crane said, “but I can tell you it exceeded budget, it exceeded expectations. The success of this event, as we come to the end of this season—and a very hard year—ensures that Marco Island Center for the Arts is going to forge forward. I hope that the enthusiasm is such that they’re going to want to do it again. I can only hope.”

Crane gives all the credit to the committee who put the event together, led by wine aficionado Scott Gilbert of Marco Island.

“All credit for this event goes to the committee,” Crane said. “We provided the backup support like we always do. We made arrangements to get the tent. We got stuff in place. We did the collateral material. We did the advertising. The event committee consists of Scott Gilbert, Jolee Farro, Linda and Bill Lee and Kathy Bartram. Scott Gilbert donated above and beyond.”

“These are wines you would see at auction in New York, or Chicago, or Hong Kong,” Crane said. “They are very, very, special wines that they have purchased or collected. They are special because they are very hard to find.”

And the wines brought the prices organizers hoped they would.

“Yes,” Crane said. “We don’t release numbers, not even to our board, for at least two weeks. We have to wait for stuff to come in. I can say, though, the Carvelli Group, as a sponsor, donated the food and their services. It was an extraordinary showing of what those restaurants can do. It’s evident that there is some really fine dining on Marco that people don’t always think about. I think it really showcased what they can do. We know it from going there, but it was extraordinary – it was top notch.”

The Carvelli Group, who owns the Oyster Society, Da Vinci’s, Marco Prime and Snook Inn, donated the food and service for the event.

“We were asked if we could donate food and service,” said Luigi Carvelli, President of the Carvelli Restaurant Group, “and that’s what we did today. When we first met, we said, ‘Wow, in the heart of season, to be able to pull this through!’”

Carvelli said the island is having an historic winter season.

“We are having a great season,” he said. “I don’t think Marco Island has ever been this busy. Very, very, busy. Everything is booming. We’re very lucky and thankful to be on Marco Island.”

Carvelli feels his group’s donation is just an example of the community spirit on the island.

“It’s a very tight community,” Carvelli said. “Marco comes together when it’s time to come together. We experienced that during Irma. Everybody came together, and worked together, to lift the island up and bring it back to normality. For us, the Carvelli Restaurant Group, I’m the President of the company, with family, my cousins, and brothers, it’s an honor to be able to do this for this beautiful community and this awesome organization – the Art Center. They need everybody’s help right now. They say the greatest gift comes from the heart. For us to be able to do this is a gift, to be able to give back to our community. It means a lot to us. And we’re always open to give back. Because we would not be where we are without all of these people right here. I just wish that after this event, more and more local businesses can come together and support the community, which is extremely important. By doing so it only makes everybody better and it helps everyone. Most important I would like to thank my staff. They’ve been great. They’ve been working so hard. And that says it all right here – just to see everybody working so hard to make this happen. It lights up our hearts.”

Gilbert was humble about his contributions.

“I’ve been collecting wine for about 35 years,” Gilbert said. “I’m kind of a passionate wine and food person. I’ve really enjoyed it. The Center for the Arts is an institution that serves visitors and residents alike. That was a compelling reason for me to get involved with what we are hoping to be a worthwhile secondary fundraising event for the center. They have a fundraiser each year, a gala that they put on. We’re hoping this becomes a worthwhile secondary event for them. It’s such a vital part of our community here. It certainly needs support. We’re hoping this event provides that. We have three California wineries here, which I think is very important for an event like this. We have three actual wineries here pouring wine. And we have two wine purveyors here pouring their portfolio. We have a lot of wine for 130 people to try and sample and get involved with. Along with some really nice live auction lots that are fantastic. And some beautiful silent auction lots. The live auction lots are 90 percent wine. Ten percent one spirit, a 10-year-old Pappy Van Winkle bourbon.”

Crane said that Gilbert was vital to the success of the event. “This was the brainchild of Scott Gilbert,” Crane said. “Scott is a wine lover, a wine collector, a wine enthusiast. He has supported the art center in the past. But he really wanted to take his love of wine and share it with others.”

The event was originally planned for April of 2020, but COVID altered the plan.

“This has been in the works for two-and-a-half to three years,” Crane said. “Originally it was not supposed to be this kind of event. It was supposed to be smaller – by invitation only. It was going to be like 80-90 people. Fewer live auction items, fewer silent auction items. That simply grew over time. This committee either donated or they went and they pulled this in. Price pointing on this was a little higher than we might normally see. And everything sold. Everything. This was a highly cultivated group for attendance because it was a very specialized event. Not to say that anybody wouldn’t enjoy it, but this was really targeted to people who are wine collectors. There were other things – there was a little bit of art, and glass. But you were really seeing a lot of things that were there to appeal to wine appreciators, wine collectors.”

“We sold tickets. It was open to the public until it sold out. We had a waiting list. Anybody who turned their tickets in, we resold them out. We had people literally the day of the event who were trying to get in. We added a table. We couldn’t add any more from a permitting standpoint. We had an unusual flow because of the tastings and the food. It wasn’t like people came in and sat. There was a lot of movement under that tent. Those people had a really good time. I think it’s more fun when you’re up and about and you’re talking. You put all of the best elements together of a wine tasting, with a special event and fundraiser. The food was delicious—the food was extraordinary. It showcased what the island can offer and what the Carvelli Group has done. The wines that you could sample were quite remarkable and amazing. There was the fundraiser component, the silent auction. Everything went, clearly we had the right crowd for what was there.”

Auctioneer Chris Marchand certainly knows how to work the crowd.

“I worship that auctioneer,” Crane said. “He told me how good he was. He trained the person who was my favorite auctioneer. Chris Marchand is extraordinary, he’s a joy to work with. He knows the business. He is somebody who will consult with you, will work with you. When I watched him at our gala, I was like ‘all right!’ He’s not inexpensive. That move from getting friends and family to be your auctioneer to being professional, recognizing as you move up the food chain. I will tell you that a professional auctioneer, especially with a fundraiser, can change the entire dynamic. This was not a crowd that necessarily had a vested interest in the Marco Island Center for the Arts.”

Proceeds from the event will be used to run the center’s summer programs.

“Just with what we raised we can run all of our summer programs,” Crane said. “We’re going to have an amazing summer. It’s so wonderful having kids here in the building. Our children’s summer program will have our mixed-media program, our fine art program where we’re going to look at art through multiple decades. We’re going to launch a brand-new program with Chris Dayett from Marco Island Academy based on the 52nd Street project in New York. He’s brilliant. I am so looking forward to working with him. I worked in professional theatre from 1992-2006. I worked for Joanne Woodward for six years. I was director of education at the Westport Country Playhouse. Chris Dayett is the real deal. He’s really interested in exploring this. The kids will not only write their own plays, but they will also create artistic sets. There will be both live and virtual performances. So, if your grandparents aren’t here, they’ll get to support you regardless.”

Delicious lobster rolls were among the food items donated by the Carvelli Restaurant Group.

Home Videos The WORLD of WINE – Wine News. Cheap wine, tasting notes and cooking with wine The World of Wine – May 2021 … END_OF_DOCUMENT_TOKEN_TO_BE_REPLACED

How to visit Napa Valley on a Budget. In this video Carson and I explain a few ways to enjoy Napa on the cheap. Tip and advice about how to visit Napa … END_OF_DOCUMENT_TOKEN_TO_BE_REPLACED

Home Videos Get To Know Argentina Wine | Wine Folly If you love Malbec, Argentina is your ultimate wine region. But that’s not … END_OF_DOCUMENT_TOKEN_TO_BE_REPLACED