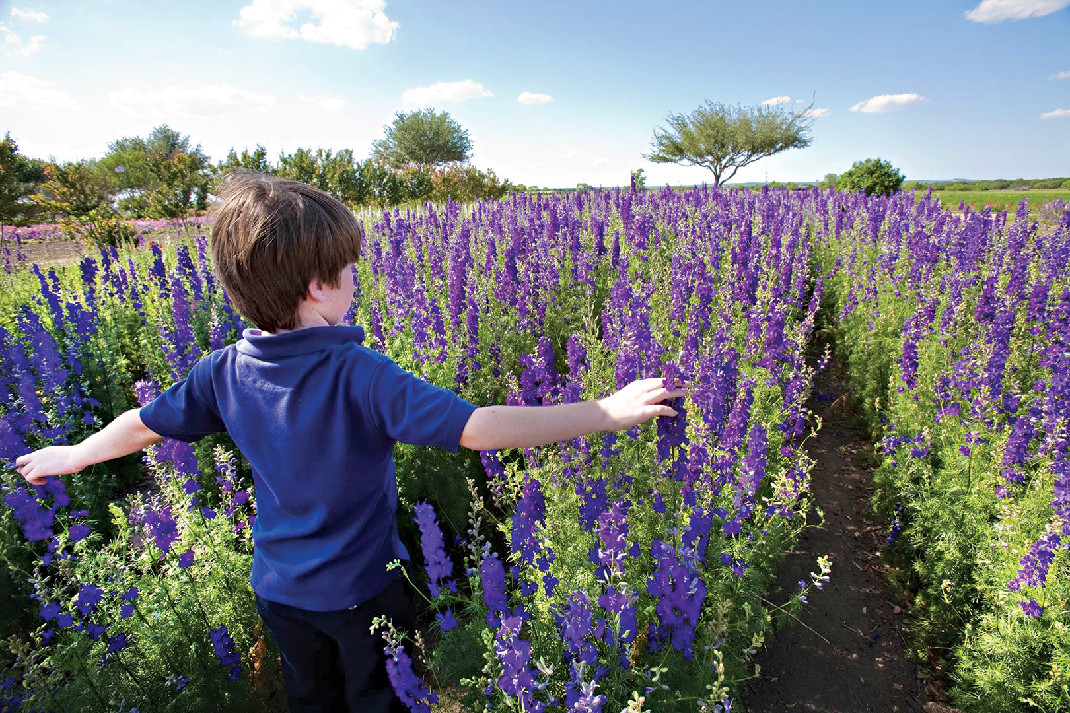 One might think, just by listening to the jukeboxes in Texas honkytonks, that the yellow rose is the state’s flower of choice. Considering that everyone from Elvis Presley to Willie Nelson has rhapsodized about it in song, that is partially true.

Gallery: The bright side of blue

But come April, the yellow rose takes a back seat — at least temporarily — to the bluebonnet, which is officially designated Texas’ state flower. For a brief span, the flowers turn the central Texas hills into a cerulean sea.

When you intersperse it with its flaming scarlet companion, the Indian paintbrush, you have a landscape resembling a floral paint-by-number canvas.

It’s no wonder then that visitors flock to the Lone Star State to join locals in celebrating the annual emerging of the bluebonnets. While they begin popping up in March, the optimal time to be in Central Texas for the spectacle is early to mid-April. Don’t be surprised, however, if the 2021 season doesn’t follow the rules. With the recent uncharacteristic cold snap in the state, the flowers might be fashionably late in making their debut.

Disappointing news, but it isn’t all bad. When the bluebonnets finally do schedule their coming out party, they will likely be even more bountiful due to the moisture from the winter storm, according to Andrea DeLong-Amaya, director of horticulture at the Lady Bird Johnson Wildflower Center in Austin.

I made the bluebonnet pilgrimage in 2020, starting in the town of Burnet, 60 miles northwest of Austin. If you don’t want to get an eye roll from locals, be sure to pronounce it correctly — that’s burn-it, not bur-net.

South of Burnet is Marble Falls, another favorite of bluebonnet seekers, and then south again to Johnson City and Fredericksburg.

In any of these places you will be treated to the spectacle of dancing bluebonnets (so named because of their resemblance to the bonnets worn by early pioneer women).

Burnet and Marble Falls should easily satisfy your quest for bluebonnets, while offering other tempting activities from spelunking and stargazing to wildlife spotting and wine tasting.

First up was breakfast at Marble Falls’ legendary Bluebonnet Café. Since 1929, this has been the place where locals meet to catch up on gossip over a bountiful breakfast (maybe a Texas-shaped waffle?). Breakfast is served all day, but Happy Hour comes early — 3 p.m.

If you think that’s a bit too early to be heading off to Margaritaville, you may be right, but it’s not too early for a slice of homemade pie. At the cafe’s daily Pie Happy Hour, you can select from a variety of 14 freshly baked pies.

Don’t leave Marble Falls without checking out its robust art scene. My favorite was the Marta Stafford Fine Art Gallery, picturesquely located in what was once the lobby of a bank. After you’re done browsing and if you’re not still full after breakfast, you’ll want to stop by Bill’s Burgers, where the homestyle griddle hamburgers are just like the owner’s “Mamaw” used to make.

There’s plenty of opportunity to work off those calories on a 90-minute, one-mile roundtrip walking tour of Longhorn Cavern State Park in Burnet.

As one of Texas’ river-formed caverns, it offers stunning formations such as the Moon Room, Hall of Diamonds, Hall of Marble and Crystal City, so named for the calcite crystals formed by interior pools of calcium-saturated water.

If you prefer a water-based activity, remember this is the center of the Hill Country Lake District, with a chain of seven highland lakes, beginning in Austin and extending north.

You can kayak Inks Lake State Park, situated on the eastern edge of the Llano uplift, the geologic heart of Texas. Here, you’ll find fossils from the Pre-Cambrian period dating back some 600 million years. It won’t take much of a stretch to imagine that just like everything else, the dinosaurs were probably bigger in Texas.

After you’ve seen the geology, you’ll be ready for the zoology. No better way to see it than a boat cruise on Lake Buchanan. Drifting along, you can spot Spanish goats precariously perched on the rocky outcroppings above the lake, along with eagles, hawks, blue herons and, if you’re lucky, an elusive bobcat.

The epicenter of Texas’ wine Industry

The uninitiated may think Texas’ beverage of choice is a tall cold Lone Star beer, and they may be right in the honkytonks and saloons of the rest of the state, but this part of Texas prefers Cabernet Sauvignons and Tempranillos.

Texas is the fifth leading wine producer in the U.S. (following California, Washington, Oregon and New York). The Hill Country is home to more than 100 wineries, with the town of Fredericksburg alone having 50 of them.

One of the loveliest wineries in the region is Torr Na Lochs in Burnet. Sitting atop a 1,200-foot escarpment overlooking Lake Buchanan, the winery specializes in Mediterranean varietals, which do well in the hot Texas climate. Torr Na Lochs is one-third of a wine triangle that also includes Wedding Oaks and Perissos wineries, easily doable on a day trip.

With good wine comes good food, and this part of Texas has you covered there too, whether it’s sampling the brisket at Wakepoint, a marina stop on Lake LBJ or experiencing fine dining at the River City Grille overlooking Lake Marble Falls.

Whatever you do, save one night for dinner in the Overlook Restaurant at the Canyon of the Eagles Resort in Burnet. Book a table in time to catch the pyrotechnic display of a Hill Country sunset, then tuck into one of their signature steak or seafood dishes, accompanied by one of the Hill Country wines.

Stay in this eco-friendly property and enjoy some of its other offerings. It may not have a spa, but you won’t miss it. You’ll find sitting on the deck overlooking Lake Buchanan just as relaxing.

Likewise, ditch the alarm clock and let the trilling of birds be your wake-up call. Their lilting melodies combine in an early morning avian opera that’s better than any mechanical device.

Canyon of the Eagles is a place to take advantage of all that the Texas Hill Country has to offer: stargazing, moonlight hikes and nocturnal wildlife watching. Don’t miss their Snake, Rattle and Roll Show, where you’ll learn the difference between local reptiles that benignly roll away and those that not-so-benignly rattle.

Finally, it’s back to the bluebonnets. Armed with your new knowledge of snakes that rattle, look before you leap into one of those azure flower patches for that selfie or family photo. The clumps of blue blossoms are a favorite nap spot for rattlesnakes seeking refuge from the blazing sun.

Texans want your memory of their favorite flower to be a good one.

As always, check for any restrictions that may be in effect due to the COVID-19 pandemic.

Home Videos The WORLD of WINE – Wine News. Cheap wine, tasting notes and cooking with wine The World of Wine – May 2021 … END_OF_DOCUMENT_TOKEN_TO_BE_REPLACED

How to visit Napa Valley on a Budget. In this video Carson and I explain a few ways to enjoy Napa on the cheap. Tip and advice about how to visit Napa … END_OF_DOCUMENT_TOKEN_TO_BE_REPLACED

Home Videos Get To Know Argentina Wine | Wine Folly If you love Malbec, Argentina is your ultimate wine region. But that’s not … END_OF_DOCUMENT_TOKEN_TO_BE_REPLACED