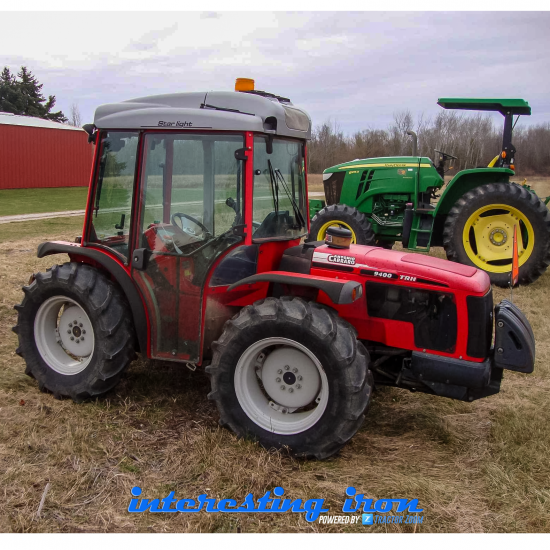 This little Antonio Carraro must be one of the smallest modern articulating farm tractors on the planet! It sells at a Michigan retirement auction on March 23, 2021.

See the details on this tractor!

Well, this is a little different, isn’t it? Normally I write about stuff built for row crop farms. But once in a while, we see neat stuff built for specialty crops like orchards and vineyards. This Antonio Carraro 9400 TRH in the photo is a prime example!

If you ask 10 random farmers in the States what Antonio Carraro makes, I’ll bet at least three of them look at their wife and answer, “Shoes?”

Four of ’em will ask if it’s an Italian restaurant chain.

If you’re lucky, the last guy might know they make tractors! Without regard to that, though, Antonio Carraro has been building funny-looking little tractors for over 60 years!

To understand these tractors and why they look like they do, you need to know a little about Italy. Antonio Carraro is small company in the little town of Padova, a few miles west of Venice, in northeastern Italy. It’s a very fertile area, but it’s not easy to farm because it’s so hilly. You’ve got to be part mountain goat to farm it… or you need to have nimble, low-slung tractors that are stable on hillsides!

And that’s exactly what they make.

The company actually started in 1910 when Giovanni Carraro opened a blacksmith shop to make ag equipment for local farmers. The business barely had time to get on its feet before military service took him away for a while. It wasn’t until the early 1920s that he was able to return to his business.

The company really began to flourish in the early ’30s when he developed a competitive planter that sold very well. By the late ’30s, he employed a dozen people building equipment! During the ’40s, though, war and scarcity of materials once again put the business on hold. However, after the war was over, the doors opened again and they picked up right where they left off! By the end of the decade, Carraro employed over 60 people!

In the late ’50s, Carraro built its first tractor, the Scarabeo. It actually looked a lot like a very narrow version of an Allis Chalmers G. It wasn’t overly pretty, but it worked, and the company implemented the lessons learned in building it. That tractor actually still exists today, too! Here’s a video of it.

In the ’60s, Giovanni Carraro began to turn the reins over to his kids… who promptly split the company in two. Antonio Carraro and his sister Bianca took the tractor side. Their goal was to build small, nimble tractors that could be used in hilly terrain. They found a niche with small farmers in northern Italy as well as the vineyards farther south.

This is the kind of environment that Antonio Carraro tractors are built for. Pretty impressive, huh?

This is the first Antonio Carraro articulating tractor, the Tigre. It was launched in 1964. I think that’s a really good-looking little tractor, and if I ever have the opportunity, I’ll absolutely pick one up!

Starting with the Tigre in 1964, Carraro has focused on continual improvements and technology upgrades, and they’ve done very well! Right now, they’ve got 17 models in their lineup – all of them are the same low-slung, narrow-size format, too. In the past, they’ve used multiple companies for their powertrains. Recently, though, they’ve announced a partnership with Yanmar on a going-forward basis.

This is what happens when you dry a Quad Trac on high heat. If you own an apple orchard on a hillside, thats a good thing! This is one of Carraro’s most recent models – the Mach 4R!

From what I gather, Antonio Carraro himself is still involved in day to day operations, and he walks the factory floor pretty regularly. The company has flourished over the past few years, growing to over 450 employees. They’ve won some fairly prestigious design and technology awards in the past 10 years as well! They’re a smart company that’s passionate about building highly capable little tractors!

The Antonio Carraro that you can bid on…

This is the first Antonio Carraro tractor we’ve ever seen on Tractor Zoom! Click the photo to see the details and lots more photos of this unique little tractor!

This 9400 TRH is located at a vineyard in the greater Traverse City area of Michigan. The grower who owns the vineyard has decided to retire after farming ground on the eastern shores of the Grand Traverse Bay for 75 years! Our friends at Miedema Auctioneering are handling the sale, which wraps up next Tuesday, March 23, 2021.

Antonio Carraro tractors are pretty unique in North America. They’re useful in orchards and vineyards, but also excel anywhere a farmer is in tight quarters. I know of a couple of chicken farmers down south who use them to feed their animals. I believe they’ve also been used in a few cattle operations here in the States as well.

Overall, they have a lot going for them in their niche. The one challenge for these tractors (in the U.S., at any rate) is the dealer network. I went out to Carraro’s website and checked; they have only about 20 dealers nationwide. While that’s not a large network, one of those dealers is Papé Machinery – a large dealer in the Pacific Northwest with a ton of locations.

What’ll it sell for? I have absolutely no idea. I looked in our Iron Comps database, and this will be the first Carraro that we track sales results for. My guess is that it’ll go for less than $30K. Spendy for a small tractor? Maybe… but it DOES have a ton of capability that you’d have a hard time replicating in a larger tractor.

I’d imagine that at the end of the day, this tractor will stay local. I know that area of Michigan, and it’s a hot spot for vineyards. They’re buying land from retiring cherry growers in that area VERY quickly. As they keep expanding, they’ll need tractors like Tony! If this one leaves the county, I’ll be surprised!

See the details on this tractor!

Hi! I’m Ryan, and I love tractors. It doesn’t matter if it’s a showpiece, an oddball, or seen its share of life … if it’s unique and it’s listed by one of our auctioneer partners at Tractor Zoom, I’m going to show it off a little bit! This equipment is all up for auction RIGHT NOW so you can bid on them! I think they’re cool, and I hope you will, too. This is Interesting Iron!

Home Videos The WORLD of WINE – Wine News. Cheap wine, tasting notes and cooking with wine The World of Wine – May 2021 … END_OF_DOCUMENT_TOKEN_TO_BE_REPLACED

How to visit Napa Valley on a Budget. In this video Carson and I explain a few ways to enjoy Napa on the cheap. Tip and advice about how to visit Napa … END_OF_DOCUMENT_TOKEN_TO_BE_REPLACED

Home Videos Get To Know Argentina Wine | Wine Folly If you love Malbec, Argentina is your ultimate wine region. But that’s not … END_OF_DOCUMENT_TOKEN_TO_BE_REPLACED