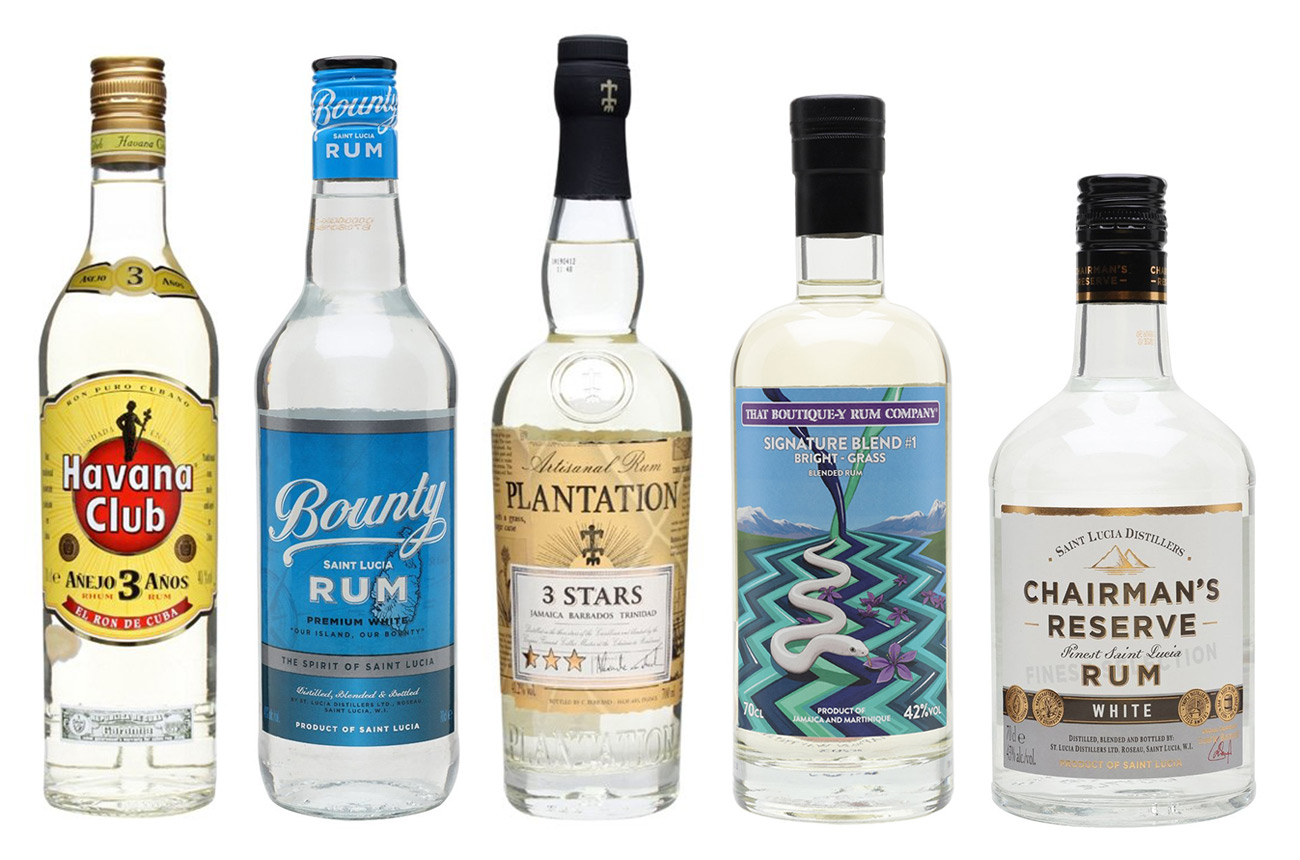 The best white rums for cocktails can be delicate, fragrant and often characterful, providing the perfect base for drinks such as the Mojito, Daiquiri, Long Island Iced Tea, Piña Colada and El Presidente. Although the lightest of all rum styles, white rum can still be packed with character, especially if a portion is distilled in pot rather than column stills.

The most affordable examples of white rum are typically unaged, drawn directly from the still. However other types of white rum can be aged in cask – or be made up of a blend of various ages – which are then charcoal-filtered before bottling to remove any colour.

Aged white rums are generally more expensive than unaged, but they can add more complex flavours to your cocktails – especially in simple mixes such as the Daiquiri, which allow the character of the spirit to shine. While a pricier aged white rum is good for special occasion cocktails, a cheaper, crowd-pleasing unaged version is perfect for parties and punches.

White rum is just one part of the rum canon, so if you’d like to find out more about the other types of rum – golden, dark, spiced and overproof – read our guide: Learn about rum.

The best white rums for cocktails:

Bacardí is the original Daquiri rum, the cocktail named after the town where American engineer Jennings Cox first combined Carta Blanca, lime juice and sugar in 1898. Sweet tropical aromas with banana and coconut and a touch of peppery spice, lead to a light, creamy palate with notes of tropical fruit, and a vanilla toffee edge. Lingering spiciness on the finish. Alc 37.5%

This Cuban bar staple has been aged in ex-bourbon casks and then filtered to remove the colour – although there is still a subtle yellow hue to it. Round and smooth with licks of citrus, cream and spice, this is a more characterful alternative to Bacardí Carta Blanca that’s ideal for using in a Cuba Libre or Mojito. Alc 40%

St Lucia’s favourite rum brand, made from Guyanese molasses, Bounty White Rum is aged for two years in ex-Bourbon casks before being filtered to remove the colour. A creamy, coconut-edged scent is followed by a smooth yet crisp mouthfeel with a touch of sweet citrus. As good in a Daquiri as it is in a Mojito. Alc 40%

A lively blend of unaged spirits from Barbados and Jamaica, two- to three-year-old spirit from Trinidad, and a splash of Jamaican 10-year-old, this boasts green, lime-like notes with a touch of cinnamon and clove spice. Colour from the aged components in the blend is removed by carbon filtration. Alc 41.2%

That Boutique-y Rum Company is a British brand focusing on sourcing top-notch rums from around the world. This is its first permanent addition to the range, and is specifically created for Daiquiris. It’s a blend of unaged rum from Martinique and aged rum from Jamaica, combining the zesty freshness of the former with the rich tropical notes of the latter: pear, pineapple, oak, grass, citrus fruit, then touches of olive and ginger. Alc 42%

A blend of three- to four-year-old St Lucian rums from both copper pot and Coffey stills aged in American oak, this white rum has a delicate banana note on the nose, leading to punchy, slightly funky banana, lime and coconut flavours with a creamy mouthfeel and smooth finish. Alc 43%

Top rums for an Old Fashioned

The best rums for a Mai Tai

Home Videos The WORLD of WINE – Wine News. Cheap wine, tasting notes and cooking with wine The World of Wine – May 2021 … END_OF_DOCUMENT_TOKEN_TO_BE_REPLACED

How to visit Napa Valley on a Budget. In this video Carson and I explain a few ways to enjoy Napa on the cheap. Tip and advice about how to visit Napa … END_OF_DOCUMENT_TOKEN_TO_BE_REPLACED

Home Videos Get To Know Argentina Wine | Wine Folly If you love Malbec, Argentina is your ultimate wine region. But that’s not … END_OF_DOCUMENT_TOKEN_TO_BE_REPLACED