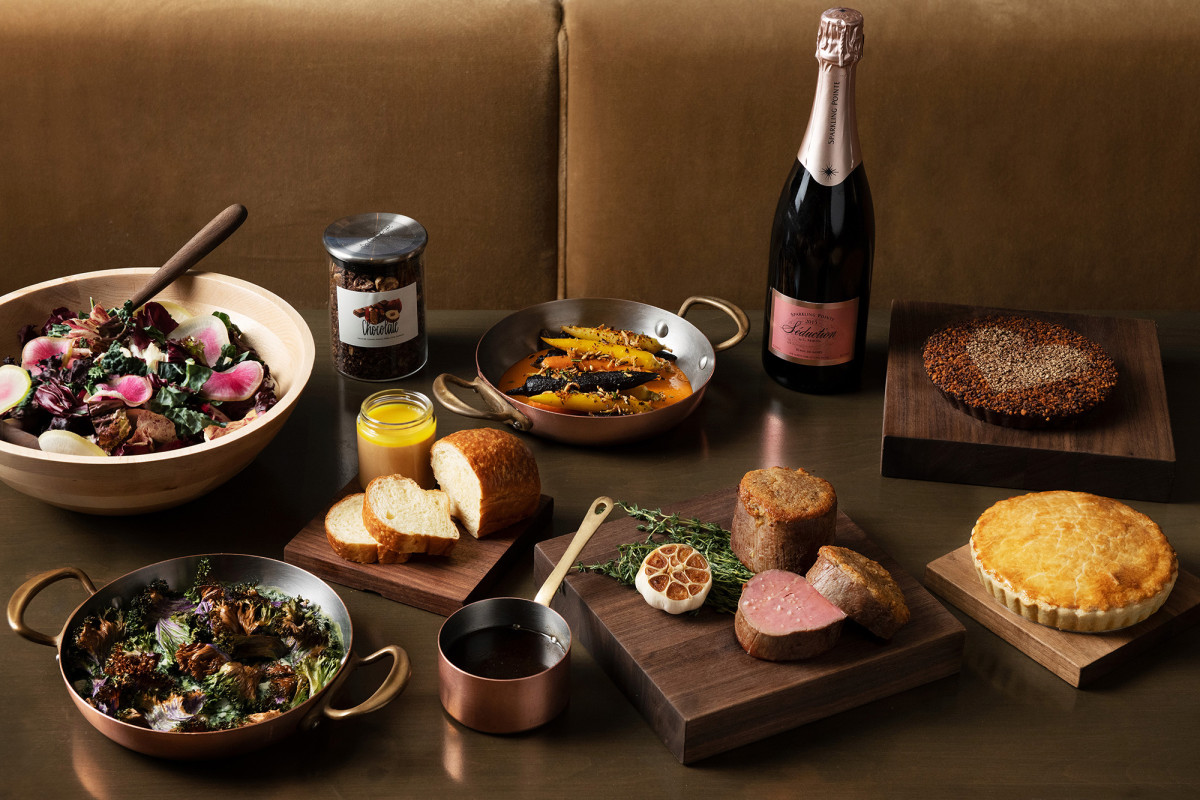 This Valentine’s Day will look different from those of years past — but even in this pandemic, there are still ways to celebrate.

Across town, a number of restaurants are helping Cupid hit his mark with gourmet takeaway meals for a romantic candlelit dinner at home.

Some involve kits so you can whip up your own sexy supper — and even include Zoom cooking classes as part of the fun. Others simply need a spot of reheating so you can keep your attention focused on your significant other.

Indoor dining, at limited capacity, returns to the city on Valentine’s Day — but for those looking for a fun at-home date night, these meals have you covered.

Splurge on a gourmet feast

Eleven Madison Park, which has three Michelin stars and was named the world’s best restaurant in 2017, is offering a multicourse dinner for two — including bone marrow-crusted beef tenderloin with Bordelaise sauce — for $325.

“I think it’s a special day to really focus and dive into a bit more of a luxurious meal,” said Danny DiStefano, 35, executive chef of Eleven Madison Park at Home. Courses include a foie gras terrine and a lobster pie with lemongrass and potato.

Extras, at an additional cost, include winter black truffle and eggs for $150 and wine by the bottle, such as a $75 rosé from Sparkling Pointe on the North Fork.

“It goes perfectly with this kind of meal,” said DiStefano.

The dishes may sound intimidating, but the breezy at-home prep requires brief oven reheating. And despite the restaurant’s prestige, DiStefano said the overall tone is playful.

The dark chocolate and passionfruit tart, for instance, comes with a gold-dusted heart — and each order includes a rose.

“There have to be those opportunities to have fun, even in a fine-dining restaurant,” he said.

Go on a wine adventure

“I wouldn’t say short rib is a Valentine’s Day classic, but for us we found that people love … the meatiness [and] richness of it,” said chef Dan Kluger.

Also included in the package: an invitation to a Zoom wine dinner at 6 p.m. on Valentine’s Day. During that presentation, which is optional to attend, Kluger will demonstrate how to prepare the menu’s items — including baked oysters and a winter chicories and citrus salad.

Also on-hand: Rita Jammet, owner of La Caravelle wines, who will discuss the evening’s wine selections, which can be purchased for an additional $95 for three bottles (also available for individual purchase).

For those who choose not to take part in the demo, Kluger, 47, said the prep is easy with instructions included — so that people “feel like they’re cooking, and they’re doing more than just throwing something in the oven.”

Top it all off with a dark chocolate pot de crème, served with honeycomb and whipped cream.

“Because everyone needs a little bit of chocolate on Valentine’s Day,” said Kluger.

In Hell’s Kitchen, French restaurant Le Privé is offering couples their pick of wine bottles from a list of two reds, one white and one rosé.

“We wanted to have every dish paired with a wine,” said Sanjay Laforest, 38, the restaurant’s owner.

Entrees include moules frites (pair with the La Cosmique chardonnay), steak frites or boeuf bourguignon (try with one of the reds, such as the Château Les Reuilles Bordeaux). But Laforest said lovebirds should order whatever they like most.

“Whatever you prefer to drink on the holiday I believe you should be drinking,” he said.

“They’re the classic French dishes, and we thought they would fare well for Valentine’s Day,” Laforest said.

Pickups at Le Privé, 626 Tenth Ave. Orders can be placed at LePriveNY.com.

On Staten Island, Vinum has a stocked four-course prix fixe Valentine’s Day menu for $68 per person. It’s also available for outdoor dining, but takeout orders come with a free bottle of prosecco.

“In Italy, for romantic dates … we don’t do Champagne, we do prosecco,” said Massimo Felici, Vinum’s 53-year-old executive chef and owner, who was born in Milan.

Fittingly, Felici’s menu is organized in the Italian style — first an appetizer, followed by pasta and then protein courses with dessert to finish. Menu highlights include a veal meatballs appetizer, a black linguini pescatora pasta dish, a pork chop for the third course and — this being Staten Island — a red velvet cake with cannoli cream frosting.

Also available: a separate Zoom cooking demo with Felici on Feb. 11, for $75 per person, ingredients included, showing couples how to make a lobster and seafood mix — with two lobsters, shrimp, mussels, calamari and tomato sauce that can be served with or without pasta. For dessert, there’s bananas foster.

“It’s fun,” he said of the class. “It’s not your usual going to the restaurant. It’s a fun date thing to do.”

A pizza my heart

For $125, a two-person package not only includes the dough and toppings to make two pies — a margherita pie and another with kale, stracciatella and anchovies — but also a Zoom link for a 5:30 p.m. cooking class on Valentine’s Day.

“We’ll teach them how to shape the pizza [and] how to dress the pizza,” said Smillie, as well as discuss the package’s wine pairing with Il Buco’s beverage director David Giuliano. Also in the kit: a cast-iron pizza pan, olives for snacking while cooking and biscotti.

Smillie admits there’s a romantic aspect of making pizza together.

“You get a little flour everywhere, you smudge it off [your partner’s] nose,” he said.

The South of France via the Rockaways

“If you look at everything as a whole, there is some sort of red component in each dish,” said Morales, 29. The five-course menu — available at $95 per person prix fixe, as well as a la carte — includes tuna belly tartare, duck leg confit with smoked blood orange and red velvet cake with chantilly cream.

There’s also a salad with radicchio and grilled beets, as well as a seafood linguine with mussels, calamari, shrimp and San Marzano tomatoes. For takeout, a simple reheat should perk the dishes back up.

“They’re pretty much ready to roll,” he said.

At Brooklyn’s Olmsted, chef-owner Greg Baxtrom, 36, aimed to craft his Valentine’s Day menu not so much around a specific romantic theme, but to suit a variety of tastes.

“Whether or not you’re eating it at home or here at the restaurant … there is definitely something on this table that’s for everyone,” he said.

The restaurant’s $200 takeaway package for two includes Olmsted’s housemade bread and butter, liver mousse garlic crostini, shrimp cocktail with tonkatsu cocktail sauce and a beet salad with blue cheese and candied hazelnuts. The latter comes with its own cool presentation.

“A roasted beet is delicious, but it’s not sexy — it’s nothing to write home about,” he said. This salad turns the beets into noodle-like shapes, with red and yellow beets together in the dish. “It’s this really pretty cloud-esque-looking salad, and you twirl it on your fork after it’s dressed.”

Not every course has to be served hot, Baxtrom added, and the prep is quite minimal. The only thing that requires heating is the roasted duck breast entree.

“You can spend 10 minutes cooking and not feel like you’re juggling,” he said. “That’s not what I want in this scenario.”

Pickups at Olmsted, 659 Vanderbilt Ave., between 2 p.m. and 5 p.m. on Valentine’s Day. Order in advance via OlmstedNYC.com

Aphrodisiacs on the half shell

There’s no need to be shellfish on Valentine’s Day. Grand Army, a bar and seafood restaurant in Brooklyn, offers not one, but two, Valentine’s Day packages with oysters, clams and shrimp.

The difference between the two is the level of skill needed to prepare. For $100, six Blue Point oysters come pre-shucked — along with six marinated littleneck clams, a six-piece shrimp cocktail, two lobster rolls and chocolate cremeux for dessert.

For $85, there’s the same dessert and shrimp cocktail — as well as a ready-to-cook spicy rigatoni kit, ready-to-be-opened clams and those same six oysters ready to be shucked. There’s even a knife included, “and the caveat to be careful,” said Grand Army co-owner Julian Brizzi, 38.

Some prefer to celebrate Valentine’s Day with fewer bells and whistles. And for those who simply crave a decadent burger, Harlem Public in Hamilton Heights offers just that.

Cooking instructions come included, but all people really need to do is pull out the frying pan.

“It’s … being able to cook with your significant other and do something at home, and make this more of an experience than just your basic takeout,” said 38-year-old co-owner Chad Vigneulle. “This is more fun.”

Home Videos The WORLD of WINE – Wine News. Cheap wine, tasting notes and cooking with wine The World of Wine – May 2021 … END_OF_DOCUMENT_TOKEN_TO_BE_REPLACED

How to visit Napa Valley on a Budget. In this video Carson and I explain a few ways to enjoy Napa on the cheap. Tip and advice about how to visit Napa … END_OF_DOCUMENT_TOKEN_TO_BE_REPLACED

Home Videos Get To Know Argentina Wine | Wine Folly If you love Malbec, Argentina is your ultimate wine region. But that’s not … END_OF_DOCUMENT_TOKEN_TO_BE_REPLACED