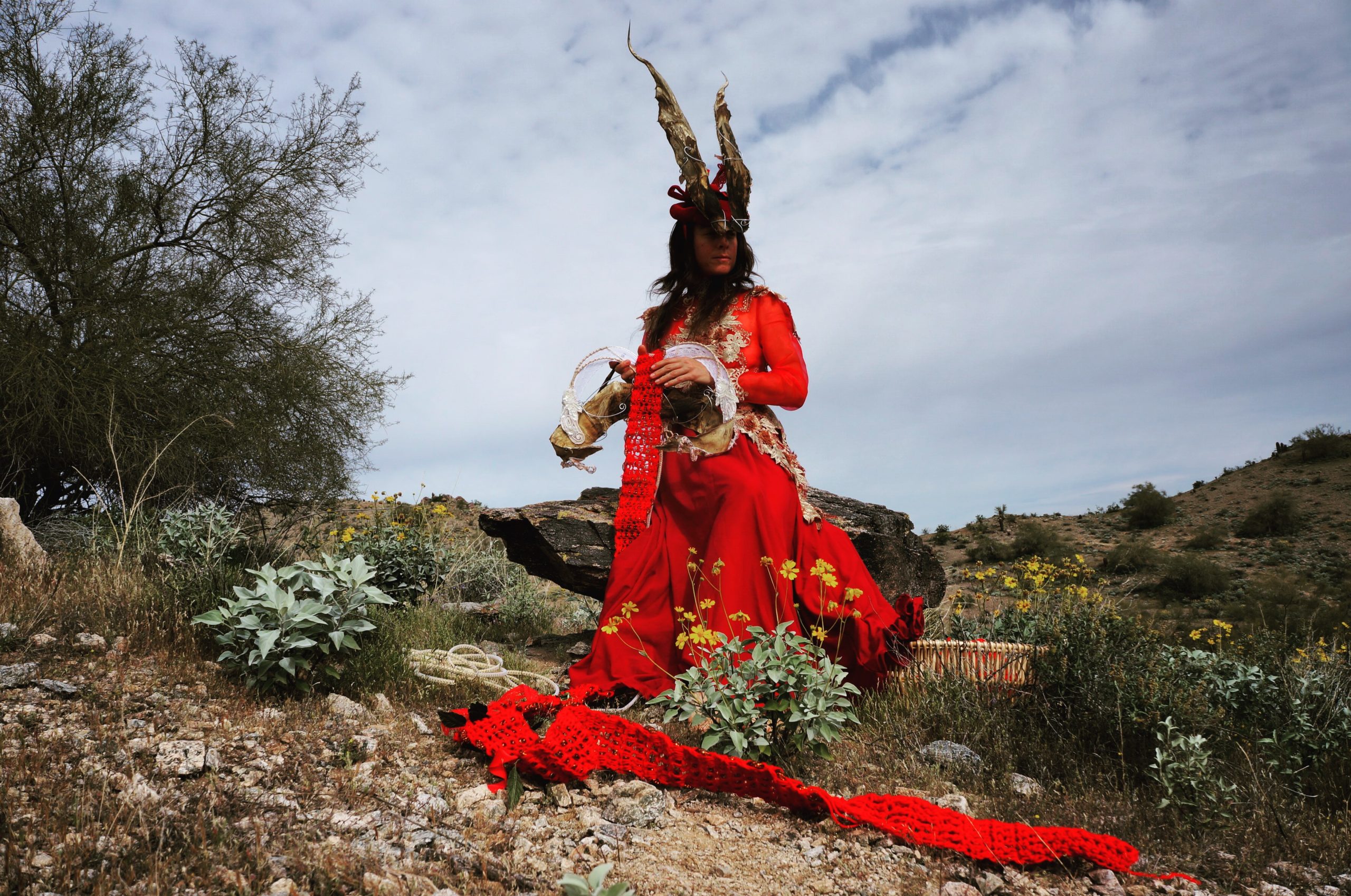 Support the independent voice of Phoenix and help keep the future of New Times free.

This week you can explore experimental art, enjoy a classic concert film outdoors, or relax over a casual wine tasting. Here’s a look at the best things to do around town, where most venues continue to require masks and social distancing.

Look for portraits by more than two dozen artists in a free exhibit at Scottsdale Civic Center Library.

See portraits painted by more than two dozen artists in a free exhibit called “I Am You, You Are Me: Portraits,” which is on view inside the gallery at Scottsdale Civic Center Library. Featured artists include Jerome Fleming, Dain Q. Gore, Brianna Noble, and Kara Roschi. Library hours on Monday, March 29, are 10 a.m. to 6 p.m. Other days/time vary. The exhibit runs through June 21.

Recalling one of Kendra Sollars’ shifting projections shown at a creative space in metro Phoenix.

Sound and visual artist Jimmy Peggie curated videos by more than 20 performers for a film called Experimental Arizona, which you can watch online at 12:30 p.m. on Wednesday, March 31. The film includes sound art, video art, and interdisciplinary installations — including work by Christine Cassano and a collaboration between Scottish improviser and sound artist Lauren Sarah Hayes and Kendra Sollars, a Tempe-based artist specializing in video art. The screening is free.

It’s been 10 years since Steven Spielberg directed the film War Horse, which blends family drama and the impacts of World War I. It’s based on a novel that also inspired a beautiful and compelling work of theater, which you can watch virtually as part of the National Theatre Live series. The first screening this week is at 10 a.m. on Wednesday, March 31, through Mesa Community College. Tickets are $15.

Spend some relaxing time sampling a variety of wines at Hidden Track Bottle Shop, where the next free Wine Tasting takes place from 4:30 to 6:30 p.m. on Thursday, April 1. There’s another Wine Tasting at Hidden Track from noon to 3 p.m. on Saturday, April 3. While you’re there, check out their wines inspired by historic districts in Phoenix.

No Festival Required is presenting an outdoor screening for Stop Making Sense, the Talking Heads concert film chronicling a live performance at the Pantages Theatre in Hollywood, at 8 p.m. on Thursday, April 1. It’s happening outside Scottsdale Center for the Performing Arts, where lawn pods for up to four people are $25 and Adirondack chair pods for up to two people are $30.

Recalling projections spotted a while back at FOUND:RE Phoenix.

FOUND:RE Phoenix Hotel is presenting a trio of eclectic performances inside hotel gallery spaces between 6 and 9 p.m. on Friday, April 2. The lineup includes interactive performances by Diana Calderon, whose work reflects her own immigrant experience, and Katharine Leigh Simpson, who uses paper and organic materials to explore themes including impermanence. The free event also includes SoSco Duo on flute and guitar.

Look for the Let’s Be Better Humans bus on Grand Avenue Friday night.

Local creatives are showing works in outdoor spaces along Grand Avenue between Roosevelt and Van Buren streets during a free event called Unhoused Awareness, hoping to highlight the issue of deaths tied to lack of shelter and water. The art walk, auction, and food drive is happening from 6 to 10 p.m. on Friday, April 2. Several creative spaces will also be open that evening.

Spend some time exploring local spaces when Bud’s Glass Joint in Roosevelt Row and Bud’s on Grand present this free holiday tradition from 2 to 4 p.m. on Saturday, April 3. Just pick up a map from Bud’s, then head out in search of eggs while you get a feel for recent changes to the area and reconnect with some of your favorite spaces.

Ten choreographers created works inspired by renowned architect Frank Lloyd Wright, which dancers will perform on a 4-foot by 4-foot stage at Taliesin West in Scottsdale on Saturday, April 3. The 6 p.m. show is sold out, but there is also an 8 p.m. performance. Featured choreographers include Carley Conder and Nicole L Olson. Tickets are $35.

Stroll garden paths surrounding by blooming desert flora at Desert Botanical Garden on Sunday, April 4, when hours are 8 a.m. to 8 p.m. You’ll be one of the first people to see the new Earth installation by Natasha Lisitsa and Daniel Schultz of Waterlily Pond Studio, which was created with 10,000 fresh plants, including roses, orchids, and succulents. It’s included with garden admission, which starts at $14.95.

Keep Phoenix New Times Free… Since we started Phoenix New Times, it has been defined as the free, independent voice of Phoenix, and we would like to keep it that way. Offering our readers free access to incisive coverage of local news, food and culture. Producing stories on everything from political scandals to the hottest new bands, with gutsy reporting, stylish writing, and staffers who’ve won everything from the Society of Professional Journalists’ Sigma Delta Chi feature-writing award to the Casey Medal for Meritorious Journalism. But with local journalism’s existence under siege and advertising revenue setbacks having a larger impact, it is important now more than ever for us to rally support behind funding our local journalism. You can help by participating in our “I Support” membership program, allowing us to keep covering Phoenix with no paywalls.

Lynn Trimble is an award-winning freelance writer and photographer specializing in arts and culture, including visual and performing arts

Home Videos The WORLD of WINE – Wine News. Cheap wine, tasting notes and cooking with wine The World of Wine – May 2021 … END_OF_DOCUMENT_TOKEN_TO_BE_REPLACED

How to visit Napa Valley on a Budget. In this video Carson and I explain a few ways to enjoy Napa on the cheap. Tip and advice about how to visit Napa … END_OF_DOCUMENT_TOKEN_TO_BE_REPLACED

Home Videos Get To Know Argentina Wine | Wine Folly If you love Malbec, Argentina is your ultimate wine region. But that’s not … END_OF_DOCUMENT_TOKEN_TO_BE_REPLACED