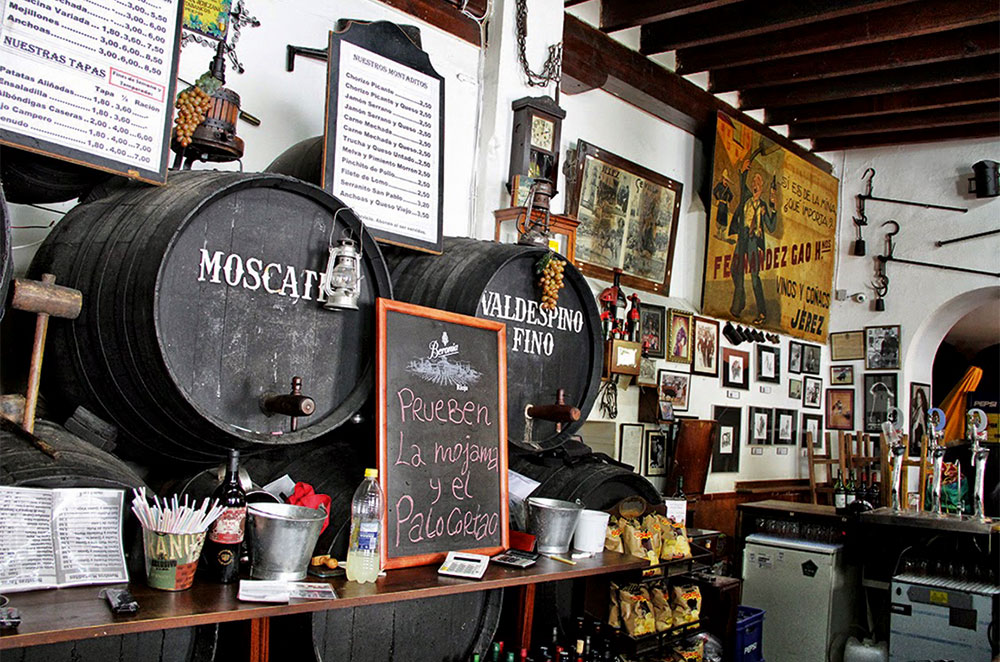 Coronavirus: Be sure to check the latest travel restrictions and refund policies before booking any trips abroad.

As part of a revenge strike against the Spanish Armada, England’s queen Elizabeth I sent Francis Drake to sack Andalucía. He brought back some 3,000 barrels of ‘sack’ (Sherry) and it was an instant hit in the royal court.

So began a love affair that continues to this day. Sales hit a peak in the 19th century with many British merchants marrying into wine- producing families, thus creating ‘Sherry dynasties’. Anglo names are still seen on some of the region’s best bottles.

The Sherry trade made the small city of Jerez an economic powerhouse, which is reflected in its grand and varied architecture. Jerez today is quite different, though: it has resisted globalisation, favouring the conservative comfort of tradition and a quiet life.

Things move slowly here. People stop to talk, to have a drink. While Jerez’s aversion to change arguably stymies its progress, it also preserves its storied, deeply cultural past. The result for those visiting is an enchanting experience, where engaging with its highlights is an activity done in the company of locals.

Despite the importance of Sherry, it’s not all about wine. The city’s claim to be one of Spain’s major flamenco hotspots is ratified at the annual Festival de Jerez every February, where the latest, greatest productions are premiered.

Flamenco is a quotidian concern, too: Sherry bars noted for their performances are not seasonal tourists traps. Friendly local patrons stand cheek to jowl year round, sipping cheap – but excellent – dry wine, while braying their praise at spirited artists on tiny stages.

These traditional Sherry bars are called ‘tabancos’, a portmanteau of the words ‘tavern’ and ‘tobacco’.

As local Sherry expert Juan Bosco Trigo Caparrini explains: ‘Tabancos were originally “half taverns”, where you drank and ate tapas, but also bought tobacco and wine, often in bulk, to take home.’

While this is rarely so nowadays, the more traditional tabancos still serve Sherry directly from the barrel. There is, however, a slowly growing number of establishments deftly pairing food – from tapas to fine-dining cuisine – with this very special wine. Here are 10 of my favourite places to drink Sherry in Jerez.

There’s something flashy about the slick interiors of this see-and-be-seen establishment. But it’s not all show: a carefully curated and rather extensive Sherry list will sate the most curious wine lovers, and an upmarket menu puts Andalucía’s prized almadraba tuna front and centre. A large seating area outside is one of Jerez’s best spots for people watching.

‘Some of the best VORS [Vinum Optimum Rare Signatum, translated as Very Old Rare Sherries] I’ve ever tried,’ says local expert Juan Bosco Trigo Caparrini. Indeed, all the Sherries here have been given a VOS or VORS designation. The place to drink them is on the cosy patio as part of a tour, the highlight of which is a remarkable art collection. Works by Velázquez, Goya and El Greco all grace the bodega walls.

La Bodeguita’s owner also has a vineyard – Viña La Constancia – out of town and uses this micro wine shop and tabanco to sell its wares. The Sherries span the full gamut of styles and everything’s keenly priced. Try the standout oloroso straight from barrel and then ask them to fill up a bottle for the gentle saunter back to your hotel.

Best known for its knowledgeable team’s food and Sherry pairings, this former winery-turned- restaurant is a popular spot with well-heeled locals. Top-quality wines are matched to not- inexpensive set menus, with Sherry in nearly every dish. Chef Javier Muñoz Soto, son of the owners, trained in food mecca Cantabria and returned with a masterful grasp of fish and meat dishes, such as palo cortado-glazed veal sweetbreads with celeriac.

Twice a day, you can hear the snap of metal and leather on wood as a flamenco dancer (along with his or her cadre of musicians) performs a sizzling display on the bar’s corner stage. It gets so packed that you may be forced to watch the beguiling performance via a huge mirror deliberately placed behind the bar. Order a little tumbler of manzanilla for €1 and pair it with any of the super-fresh seafood tapas.

One of the most traditional tabancos in Jerez, La Pandilla dates back to the 1930s. Following a period of closure, it’s now open again with owners keen on maintaining its film-set charm and bullfighting heritage. That’s why you’ll find old posters and other memorabilia decorating its well-worn walls. Its food offer is more progressive, though: try pairing the tuna sirloin toast with a glass of sweet and sticky Pedro Ximénez.

Locals swear by this backstreet tabanco, where the savviest drinkers come to enjoy palo cortado, a rare style of Sherry with near- mystical status. The bar’s highly knowledgeable owner, Mireia Dot Rodríguez, is only too happy to guide you through her exhaustive selection. The bare stone walls and dim lighting may lend an unassuming feel, but on the weekends it’s abuzz with discerning (but invariably friendly) locals.

Another food-forward tabanco, Las Banderillas’ exceptionally friendly staff serve much of its Sherry straight from the barrel. Try a dry, salty manzanilla with some Ibérico ham. Bullfighting is venerated here, with one of the seating options resembling a burladero: the name of the shelter where bullfighters take cover before coming out into the ring.

Sherry fans and novices alike will be thankful for El Plateros’ wine flights, which span dry and delicate fino through to dark and sweet PX, via oloroso, cream and amontillado. Careful though – they don’t scrimp on the measures here. In the evening, the kitchen opens at about 8pm, offering a wide selection of paper-plate tapas treats. Don’t miss the superlative chicharrones especiales: finely sliced crispy pork belly.

Possibly the most characterful of them all, San Pablo has all the attributes that charm: old wooden doors lead into a double-height space decorated with vintage vineyard memorabilia. The lighting is strangely office-like (bright white), but that matters little when the house fino – straight from the barrel – is the best in town. It’s set on a pretty residential street, so you may be reminded to keep it down when you leave.

Home Videos The WORLD of WINE – Wine News. Cheap wine, tasting notes and cooking with wine The World of Wine – May 2021 … END_OF_DOCUMENT_TOKEN_TO_BE_REPLACED

How to visit Napa Valley on a Budget. In this video Carson and I explain a few ways to enjoy Napa on the cheap. Tip and advice about how to visit Napa … END_OF_DOCUMENT_TOKEN_TO_BE_REPLACED

Home Videos Get To Know Argentina Wine | Wine Folly If you love Malbec, Argentina is your ultimate wine region. But that’s not … END_OF_DOCUMENT_TOKEN_TO_BE_REPLACED