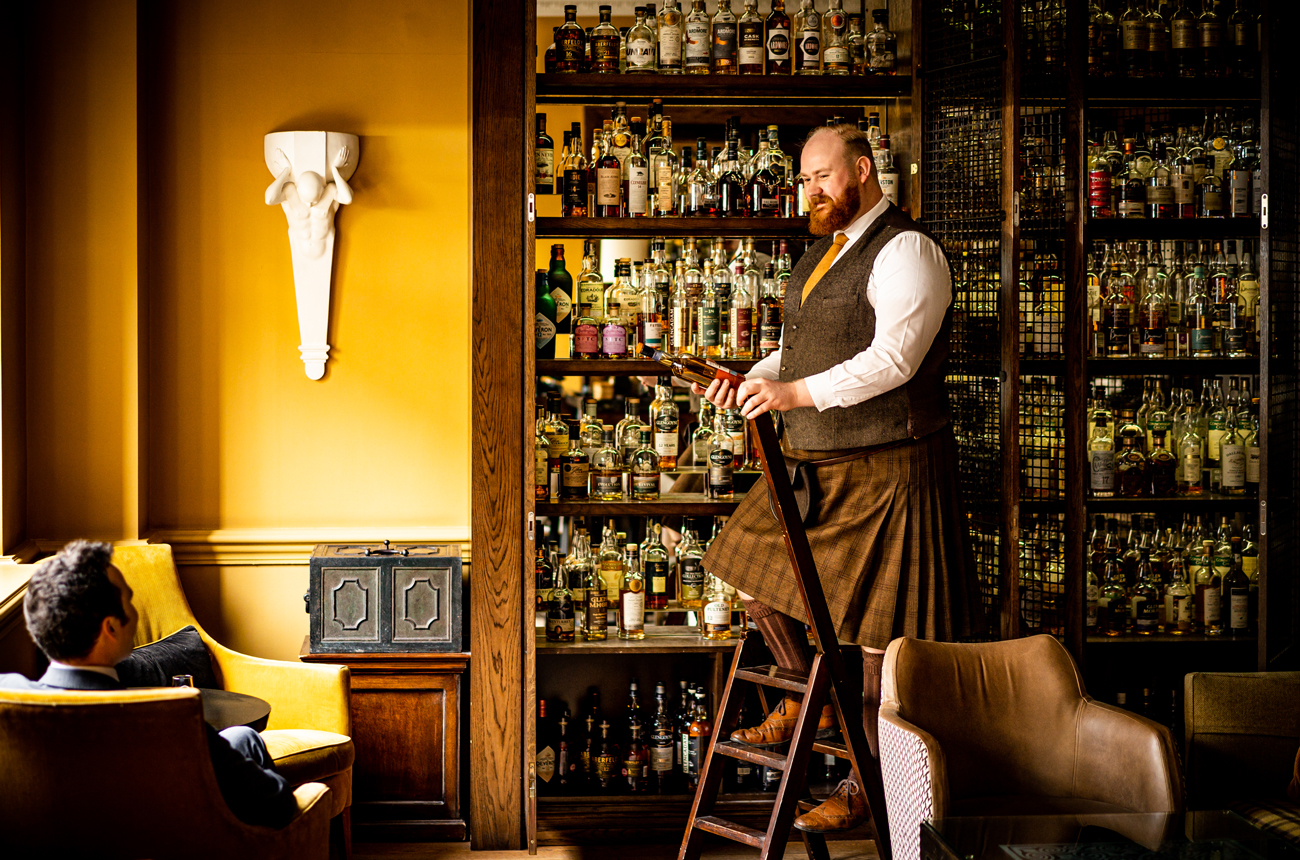 From city breaks in Edinburgh and Aberdeen to getaways in the Highlands and Islands, Scotland offers plenty of choice for whisky lovers who are keen to travel and find out more about their favourite drams. The handpicked selection of hotels below provides a taste of the varied experiences on offer.

History and whisky go hand in hand, but they’re even closer bedfellows at Dornoch Castle, about an hour’s drive north of Inverness. Sitting opposite Dornoch Cathedral and a stone’s throw from the historic courtroom and jail, the hotel has rooms in the castle itself and in surrounding cottages. It’s an ideal hideaway during rainy winter nights, nursing a dram by the fire. Soon, the hotel will even have its own whisky – owners Simon and Phil Thompson built a micro-distillery in an old fire station within the castle’s grounds and are making their Thompson Brother’s Organic Highland Gin, while also laying down whisky.

The Century Bar at Gleneagles

‘The glorious playground’ is best known for its golf courses, but Gleneagles has strong whisky credentials too. Its Century Bar, with traditional island countertop, is a luxurious location in which to indulge in a high-end dram. Fancy a whisky cocktail instead? Then head for the glamour of the 1920s-style American Bar, with its over-stuffed armchairs and subdued lighting. These luxurious touches continue over dinner at Restaurant Andrew Fairlie, Scotland’s only two-star Michelin eatery, now run by head chef Stephen McLaughlin and general manager Dale Dewsbury following the eponymous chef’s death. The silver service in the hotel’s main restaurant isn’t too shabby either.

Savouring a whisky in Meldrum House’s 800-year-old Cave Bar is a special experience, with its vaulted stone ceiling and a line-up of more than 100 malts. So too is staying in the 13th-century hotel, set in 240 acres of grounds, with its own golf course, and an excellent range of food. Meldrum House is also an ideal location from which to explore some of the lesser-known distilleries in the north-east of Scotland: Glen Garioch nearby in the village of Oldmeldrum, Glendronach near Huntly, and Glenglassaugh near Portsoy, on the Banffshire coast.

Don’t be put off by the ‘sports bar’ vibe of the hotel’s main watering hole, with its big-screen TVs. Instead, head to the more secluded Freedom an’ Whisky bar next door and prepare to be whisked away on a whisky journey around Scotland. The knowledge of the staff behind the bar is impressive, as they help the uninitiated to navigate their way through the 30-page ‘whisky bible’ menu. Aberdonians love a bargain, and that’s reflected in the whisky lounge’s sensible prices, while more seasoned whisky fans will find some off-the-beaten-track gems to elevate their evenings.

What could be better than waking up on Islay, Scotland’s whisky island? How about waking up at one of its most famous distilleries, Ardbeg? Seaview Cottage used to be home to the distillery manager, but its fixtures and fittings are now somewhat grander, akin to a boutique hotel or B&B. The views from the garden and further along the shoreline are stunning, especially on a clear morning. As well as being the obvious place to stay for peated-whisky fans visiting Ardbeg, it’s also a good base from which to explore Islay’s other distilleries.

As restaurants-with-rooms go, The Anderson is hard to beat. American owner Jim Anderson has an encyclopaedic knowledge of whisky and is an excellent guide to his pub’s 250-plus bottles. The village of Fortrose sits on the Black Isle, the peninsula to the north of Inverness, famous for its dolphin-watching spot at Chanonry Point. The Black Isle is an ideal base for exploring many Highland distilleries, from Balblair, Dalmore and Glen Ord to Brora and Clynelish further up the coast. Black Isle Brewery’s organic craft beer site is also a great place to see the other product of Scotland’s grain. 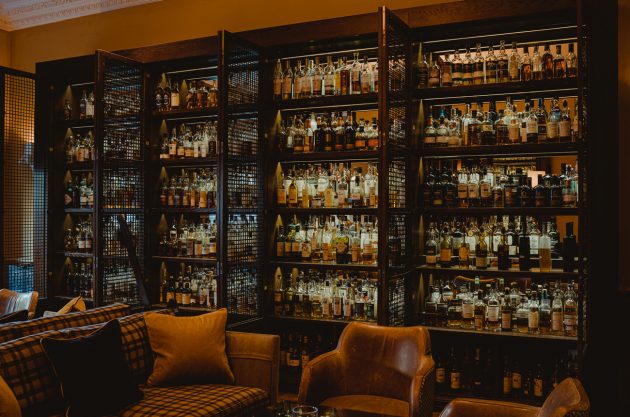 The whisky wall at Scotch bar in The Balmoral

You know there’s going to be some serious stuff to sample when the bottles are locked away behind cages. Scotch, The Balmoral hotel’s whisky bar, is all about theatre, with kilted bartenders fetching stools and ladders to retrieve special bottles from the 500 or so perched high on its shelves. If you can tear yourself away from the one-star Michelin restaurant, Number One, or afternoon tea accompanied by a harp or piano in the Palm Court, then Edinburgh’s whisky scene is well-worth exploring. Don’t miss the city’s new Holyrood distillery, as well as Glenkinchie distillery, tucked away in neighbouring East Lothian’s countryside.

Few hotels can match The Craigellachie’s location, nestled at the heart of the Malt Whisky Trail driving route through Speyside. The hotel has got better and better over the years; its Quaich bar (famously home to around 1,000 whiskies) used to be tucked away in a corner room but has now spread out into a spacious salon, while the addition of the Copper Dog pub downstairs has opened up the food and drink choices. Craigellachie is surrounded by big-name distilleries: The Macallan within striking distance, The Glenlivet to the south, and Glenfiddich to the east. Also, the Speyside Cooperage is on its doorstep.

Home Videos The WORLD of WINE – Wine News. Cheap wine, tasting notes and cooking with wine The World of Wine – May 2021 … END_OF_DOCUMENT_TOKEN_TO_BE_REPLACED

How to visit Napa Valley on a Budget. In this video Carson and I explain a few ways to enjoy Napa on the cheap. Tip and advice about how to visit Napa … END_OF_DOCUMENT_TOKEN_TO_BE_REPLACED

Home Videos Get To Know Argentina Wine | Wine Folly If you love Malbec, Argentina is your ultimate wine region. But that’s not … END_OF_DOCUMENT_TOKEN_TO_BE_REPLACED