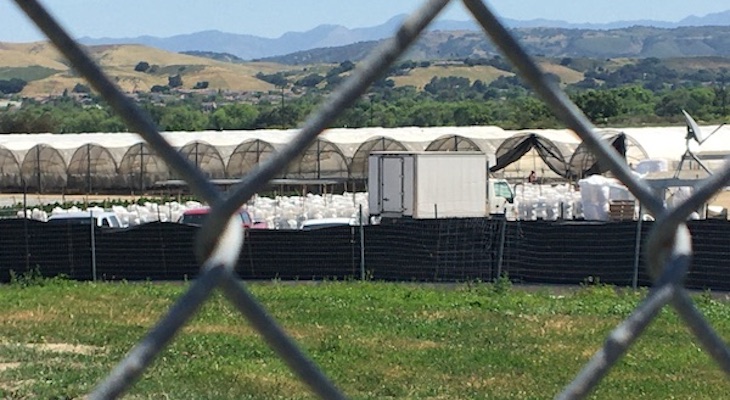 A zoning permit for Central Coast Agriculture Inc., a 30-acre cannabis “hoop-house” operation in wine country west of Buellton, was approved by the county Board of Supervisors this week, just hours after the grower signed off on a comprehensive odor-control plan that his critics had been requesting for months.

Voting 4-0 on Tuesday, with one abstention, the supervisors praised both John De Friel, the owner and CEO of Central Coast Agriculture, and Marc Chytilo, an attorney for the Santa Barbara Coalition for Responsible Cannabis, a countywide group of farmers, vintners and residents who advocate for tougher regulation of the burgeoning industry.

“The bar has been raised,” said Supervisor Steve Lavagnino, who represents the Santa Maria Valley. “We ended up with a better project at the end of the day.”

De Friel did not respond to a request for comment on Tuesday, and Matt Allen, De Friel’s attorney, declined to comment. But Chytilo, who has filed lawsuits challenging the county’s approval of three other outdoor cannabis operations west of Buellton, said that negotiations with De Friel’s team, hosted by the county, began on Zoom on Friday and wound up at noon on Tuesday, just two hours before the hearing began. As part of the deal, he said, the coalition agreed not to sue De Friel.

“We’d been trying to have a discussion with this operator back to last fall,” Chytilo said. “Now, I’m confident that if there are odor issues, they will be dealt with. Our approach demonstrates that the coalition is not anti-cannabis. The coalition can and does work with growers to help them get it right.”

The Central Coast Agriculture project that was approved on Tuesday is located at 8701 Santa Rosa Road near the eastern gateway to the Sta. Rita Hills, a federally-designated American Viticultural Area. (A permit is still pending for a second De Friel project under the same name at 5645 Santa Rosa Road).

Many vintners contend that the sight of white plastic hoop houses and the stench of pot from cannabis operations will drive wine-tasting tourists away. In Buellton, residents complain of having to endure weeks of “skunky” smells during the spring and fall harvests, along with sore throats, respiratory problems and headaches.

Supervisor Joan Hartmann, who represents much of the Sta. Rita Hills, abstained from Tuesday’s vote. Nearly 800 acres of cannabis cultivation have been proposed for the wine region, a potential concentration that Hartmann called “untenable.”

In addition, she noted that Central Coast Agriculture, which she can see from her home, “has expanded enormously from medical to retail” operations in recent years.

“That is certainly not what we intended and it cannot go unremarked,” Hartmann said.

The odor control plan for Central Coast Agriculture at 8701 Santa Rosa Road – one of only two cannabis operations currently up and running near Buellton – will require De Friel to install carbon air filters in his processing building and place an odor-neutralizing piping system, called a “vapor-control” system, along his northern and eastern property lines; the idea is to prevent odors from traveling toward Buellton in the prevailing winds. In addition, he must monitor wind and weather conditions, fresh-freeze his plants within two hours of harvest and address odor complaints.

De Friel made these concessions in the course of three county Planning Commission hearings on the project, beginning last October. During this week’s last-minute negotiations, he also agreed to hire an odor expert for two of the next three years to test and monitor the volatile organic compounds released by his cannabis crop. The testing will take place at 12 locations daily during the first seven days of each seasonal harvest. The coalition and the City of Buellton have said such testing was critical to identifying the sources of the odors from cannabis cultivation.

If De Friel receives more than one substantial complaint, he must conduct a study of the best available control technology to resolve the problem. Such a study could include an analysis of the location and type of his plantings, improvements to his carbon filter and vapor control systems, and additional testing.

Finally, in addition to sending reports every six months to residents within 1,000 feet of his operation, De Friel will send reports to any person or organization within the Buellton zip code that requests to be included on the community outreach list.

The odor control plan for Central Coast Agriculture is similar to the agreement that members of the coalition and Concerned Carpinterians, another citizens’ group, hammered out late last year with Cindy and David Van Wingerden, the owners of CVW Organic Farms, a large greenhouse cannabis operation that has been approved but is not yet operating on Cravens Lane in the Carpinteria Valley.

Central Coast Agriculture has been approved for 22 acres of cannabis cultivation under 12-foot-high white plastic hoops that were erected without permits on a 68-acre property. In addition, the project includes more than 44,000 square feet of developed structures, such as cannabis greenhouses and buildings for processing, distribution and storage. Eighty percent of the cannabis for processing is grown off-site. The harvested product is stored in 57 refrigerated containers, each of them 320 square feet in size. The containers were erected without permits; 42 of them must be removed after three years.

Because Central Coast Agriculture is less than half a mile from a rural neighborhood, it needed a conditional use permit, a zoning permit that requires that a project “will not be detrimental to the comfort, convenience, general welfare, health, and safety of the neighborhood and will be compatible with the surrounding area.”

Only five of the 24 cannabis projects proposed for the Sta. Rita Hills require conditional use permits. Last June, the board majority of Lavagnino and supervisors Das Williams and Gregg Hart rejected a Planning Commission recommendation that would have required such permits for all cannabis cultivation. Hartmann proposed that conditional use permits be required for all cannabis in the wine region, but the majority rejected that idea, too.

De Friel’s second project – 24 acres of cannabis cultivation at 5645 Santa Rosa Road – does not require a conditional use permit. A less restrictive “land use permit” was approved for that project by the county Planning Director in February. The coalition has appealed to the Planning Commission to deny the permit, and a hearing is set for May 12.

Melinda Burns volunteers as a freelance journalist in Santa Barbara as a community service; she offers her news reports to multiple local publications, at the same time, for free.

Home Videos The WORLD of WINE – Wine News. Cheap wine, tasting notes and cooking with wine The World of Wine – May 2021 … END_OF_DOCUMENT_TOKEN_TO_BE_REPLACED

How to visit Napa Valley on a Budget. In this video Carson and I explain a few ways to enjoy Napa on the cheap. Tip and advice about how to visit Napa … END_OF_DOCUMENT_TOKEN_TO_BE_REPLACED

Home Videos Get To Know Argentina Wine | Wine Folly If you love Malbec, Argentina is your ultimate wine region. But that’s not … END_OF_DOCUMENT_TOKEN_TO_BE_REPLACED