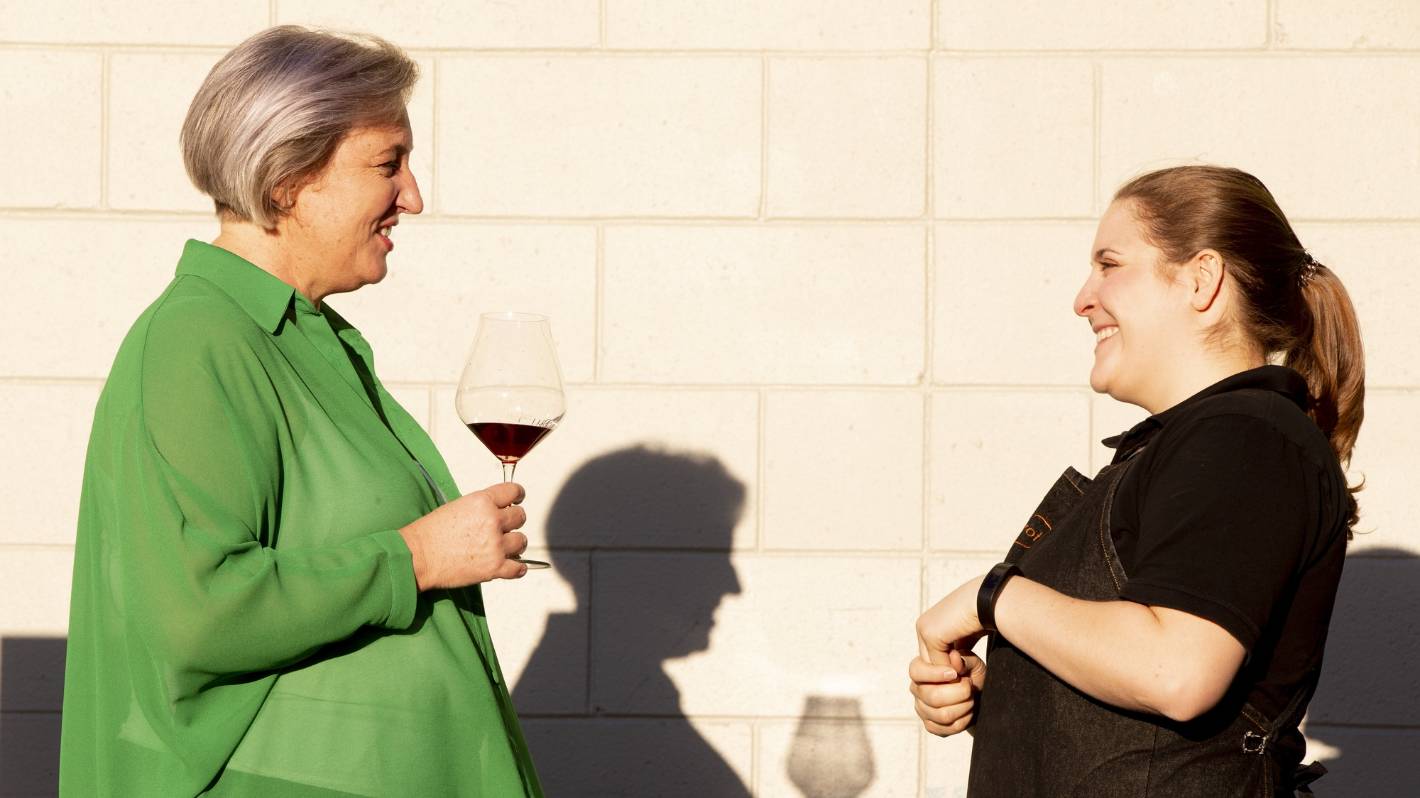 Over two glasses of albariño at Wellington’s Noble Rot, Jo Cribb talks to Kelly Dennett about enrolling in wine school, buying 4 hectares of grapes in Martinborough, and her new Instagram page, WineSauvy, which demystifies and recommends affordable wine.

Sunday Star-Times: Thank you for choosing the wine

Jo Cribb: What a pretty colour

It is a lovely colour, sort of gold.

So you can kind of smell the sauvy undertones, but it’ll have a bit more floral in it, like a jasmine. You’re probably getting the peach as well.

READ MORE:
* Supermarket Sleuth: Five of the best no or low-alcohol drinks for Dry July
* The ultimate girls’ weekend in the Bay of Islands – What to do, where to eat and where to stay
* George Bennett turns up the heat ahead of ‘extreme’ Tokyo Olympics

I’m getting a buttery smell.

Totally, totally. She’s quite tasty, eh? She takes you to some cafe at a beach in Spain.

Have you always been a wine drinker?

At university it was beer and cider. I grew up in the South Island, so probably not wine. [Jo’s partner] and I were always really interested in wine and at one stage we had a really good cellar, and then we went overseas and drank it all in two nights.

Jo Cribb has been studying wine, which led to her buying a winery.

It was heaps. We didn’t do it by ourselves, we just decided not to put it into storage. Then I can remember travelling a lot and being exposed to vin de pays, the French wine in plastic 2-litre containers, and knowing it tasted different.Now I think we’ve got to the stage where we drink a lot less, but are being more adventurous.

Then you launched your wine studies.

I enrolled in a New Zealand School of Wine and Spirits level one, one-day course at Noble Rot, and that was interesting, so I did level two, which was a bit more demanding, but it taught me that, I might know 10 grape varieties, but there’s something like 10,000 in the world.

Then I did level three, which is getting into professional level. I had to sit wine tasting exams. I use the analogy of mindfulness. I’ll sit and smell it for a very long time, because that’s where the taste comes from. You only have to take a sip, and it’s a whole world adventure.

I’m reminded during lockdown that we don’t go out to dinner simply because we don’t want to cook, it’s going out to be with your friends and family, and it made me think about going out for a glass of wine completely differently.

The more I think we understand and appreciate this, I think we end up drinking much less, but appreciating it much more. I don’t even say necessarily much more expensive just…

Smarter choices. So I’ve just started my diploma, which is two years, part-time, which is incredibly intense. You become totally knowledgeable to an nth degree about wine. People ask me, ‘what are you going to do with it?’ And I say, I don’t know – and it’s quite nice not to.

The best kind of wine? The one you’re drinking, says Jo Cribb.

Is wine pretentious? Can anyone get into wine and become knowledgeable about it?

Totally. I was talking to a friend who works in the wine industry, and she watched how someone would come in and be approached: ‘That’s just a woman, we’ll send her to the sauv section and get her a cheap one’. You know? I’ve had that happen to me. In a restaurant, they’ll hand the wine list to my husband and it’s like, well, I’m halfway through my diploma, I think I can navigate that.

What do you drink now?

Wake up among the vines, and the day just gets better from there.

Ever met a bottle of wine you didn’t like?

Yep. We did a whole session on spumante, which is really, really sweet Italian bubble, and it felt like the equivalent of drinking toilet freshener. But, if we were on an incredibly hot day in a piazza in Italy, I guarantee it’s the best thing on the planet, right?

There’s no style that you defer to?

It would be very sacrilegious of me to say [but] I would probably avoid a Marlborough sauv.

Tell me about the buying of the vineyard.

I think it was only the wine lessons to give us the confidence. We started running the numbers, and we’ve bought 4 hectares of sauv grapes, and we’ve got a build site. So it’s a business, but eventually we’ll live there. My husband said, we might as well buy something productive. But, what a learning curve.

I bet. Whose idea was it?

We were over there for a long weekend, and we walked down the main street of Greytown, and they had so many real estate agents, we didn’t even think we could buy plots that big, or in our range, but they are, we could, we did, just like that.

How long before seeing all of these real estate agents and taking possession?

They’re 15 years old. There’s nothing at the moment, we’ve basically bought a paddock full of twigs, 9000 twigs. It’s a leap of faith. Over the last few weeks I’ve been researching and purchasing a frost-fan.

To keep them safe in winter?

Yes, they flower around September, which is also spring frost. If they get frosted [the bugs] fall off. What a steep learning curve. I think I needed to have done the study to understand grapes, to understand what to buy, how it all fits in. So we knew what we were looking for, so we could look at the vines and see they were OK. So I’m farming grapes now. Then it goes to a producer. I don’t think we’ll ever make wine of our own, I think they’re better off with somebody else, but we know where they’ll end up, so that’s exciting.

Are they fermented on-site?

They go somewhere else. We harvest and ship very quickly, because they’re sauv grapes, they need to move quickly. They’re mechanically harvested, there’s no skipping around with baskets.

Jo Cribb and her partner bought 4 hectares of grapes.

Do you visit them?

We do, we have a picnic, and talk to them. My dad likes a good Aussie red, so we took him out there to talk to the grapes as well. He’s really excited and asking lots of questions, so it’s kind of like the family is growing grapes.

What are the basic things someone needs to know to choose a wine?

Great question. I think they need to know what they like, where the wine will be drunk – within reason. Are we drinking bubbles or a rich red? What are you going to be doing with it? Some wines you can’t drink alone – like this albariño – you have to have food with it. Will my friends like it? It’s like a jigsaw.

You don’t need to know about tannins, and acidity?

You don’t need to know about that. [For example] you came in today and said I’m after a crisp, fresh, refreshing wine. Google will tell you sauvignon, maybe a German riesling. Then you can go, OK I’ve got $20, I’m drinking with friends and they like this… it starts to narrow. I just encourage people to try. I think with a wee bit of effort, we can get a huge amount of return for our wine choices.

There’s so much. Santorini, right? In Greece, because it’s a volcanic island, they train their vines into little nests and grow their vines in there. And then once you taste their wines, you can taste, I don’t know, the salty, volcanic… you can taste where they come from.

We can go travelling with our wine.

Because we’re not allowed to travel. In the weekend, we might go to Italy.

*Jo Cribb is sampling 300 wines under $30 and documenting her winery journey – search @WineSauvy on Instagram. Kelly Dennett is making every effort to break out of her sauvignon bubble.

How to pair wine with takeaways

Cut through the oily flavours of a takeaway with a bit of acidity. Stand up to that eye fillet with a hearty merlot malbec blend, or match your salty seafood with something fresh that reminds you of the ocean. A degustation dinner or a restaurant-quality meal is not a prerequisite if you’re wanting to up the synergy of your dinner and wine pairings. In fact, a self-cooked meal isn’t a prerequisite.

Villa Maria wine marketing specialist Jess Bell’s personal ethos is, if you like a wine and you like a food, even if they’re not technically the perfect pairing, you’re going to enjoy them. “A great pairing isn’t the pinnacle,” Bell says. “If you go into the science of wine pairing, you can get into so many rules, but a lot of them contradict themselves. When I’m talking about when and food pairing in particular, for me it’s more about weight and balance.”

Bell says for greasy or fatty foods, look to wines with acidity or sweetness, like a pinot gris, riesling, or a zesty, citrusy sauv blanc (Esk Valley pinot gris, 2021, or Esk Valley artisanal albariño 2021). A meal with lots of different ingredients or toppings, like pizza, can work well with an all-rounder, like a Rose (Esk Valley Estate rosé 2021). Takeaways with a hearty red meat component, like a cheeseburger or steak, could do well with a weighty red blend (Esk Valley Estate merlot cabernet sauvignon malbec 2019).

Home Videos The WORLD of WINE – Wine News. Cheap wine, tasting notes and cooking with wine The World of Wine – May 2021 … END_OF_DOCUMENT_TOKEN_TO_BE_REPLACED

How to visit Napa Valley on a Budget. In this video Carson and I explain a few ways to enjoy Napa on the cheap. Tip and advice about how to visit Napa … END_OF_DOCUMENT_TOKEN_TO_BE_REPLACED

Home Videos Get To Know Argentina Wine | Wine Folly If you love Malbec, Argentina is your ultimate wine region. But that’s not … END_OF_DOCUMENT_TOKEN_TO_BE_REPLACED