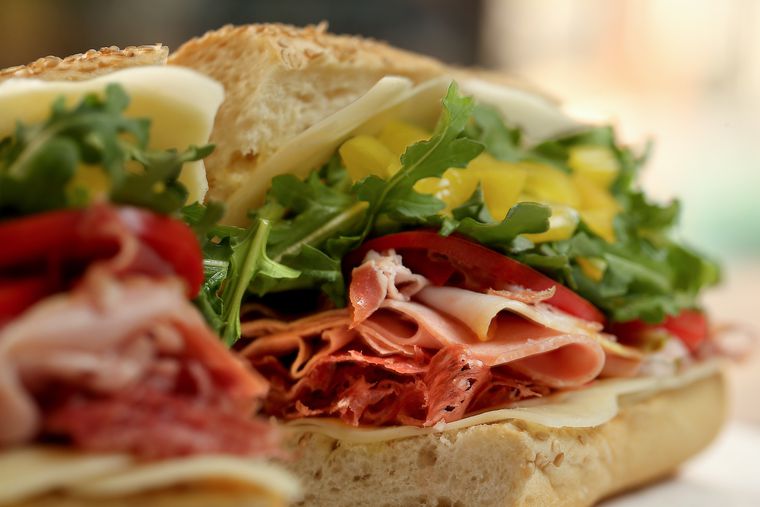 Here we go with another list of our favorites. This time it’s the hoagie, that born-in-Philly sandwich. Fifteen shops. Also this week, we’ll tell you where to pick berries and also drop some hot restaurant dish on you about Vernick, which critic Craig LaBan has said is the best overall restaurant in town. (Perhaps we mean the best all-around restaurant. An “overall” restaurant might be taking “farm-to-table” to the extreme.)

Philly is the home of the hoagie, so naturally the Philly area is the best place on earth to enjoy the signature sandwich. (All others are sub-par, you might say.) Critic Craig LaBan, service editor Jillian Wilson, and I offer you 15 hoagie destinations, from South Philly to Norristown, with stops in Mount Airy, Kensington, Fishtown, and the Northeast. If we didn’t shout out your favorite, kindly hit me up, and we shall investigate.

Just as apples announce that fall is here, few things signal the start of summer like pick-your-own berries. Nothing beats a berry — whether straw-, rasp-, black-, or blue- — fresh from the earth, and staff writer Nick Vadala rounds up the selection of PYO farms in the region.

Charisse McGill, whose Lokal Artisan Foods stand sells those popular French Toast Bites snacks, is back with big news about beer. She and a smaller brewer collaborated on one last Christmas, and it sold out. Now, Yards Brewing Co. has signed on for a year-round venture.

Jersey Shore event planners Kris and Randy Sumey were sucker-punched by the pandemic. Their pivot is opening Boardwalk Vegan, a Shore-themed, plant-based restaurant in Delaware County selling pizza, fries, sandwiches, and such.

A first-time restaurant owner, at 68

Chef Alan Lichtenstein has spent a lifetime working for others. The chef, a 68-year-old grandfather, bought The Little Hen in Haddonfield, and he did it for his family — the same reason that chefs half his age go into the business.

Federal Donuts, whose stands and shops dot the city, will make a big move into the Philadelphia suburbs on May 24 with the opening of a stand inside the Wynnewood Whole Foods Market.

The major development from the Vernick world:

Vernick Wine, the jewel-box bottle shop next door to Vernick Food & Drink at 2029 Walnut St., will begin offering six-course tasting dinners starting May 28. Food & Drink chef de cuisine Robert Newcomb will slide in to oversee. Seatings are available Thursday to Saturday for up to four people with reservations available four weeks in advance. Reservations ($135, plus tax and service) must be prepaid. An optional wine pairing is available for $65 per person. The first menu is not ready, but his people tell me to expect “elements of king crab, morels, tuna, and dishes like Greg’s version of tortellini en brodo. The menu will be a combination of the classics balanced with some playful elements, as in, you won’t always have to use utensils.”

Blume, which popped into 1500 Locust St. in 2019 with a bar menu and Instagrammable atmospherics, is due to return from a pandemic pause on Friday, May 21 as Blume Burger with similarly photogenic burgers, wood-fired pizzas, and boozy shakes. It will open at 4 p.m. May 21 and 22, do takeout/delivery on May 23, and then return Memorial Day weekend with more permanent hours.

Zeppoli, the rustic Italian BYOB in Collingswood from Palizzi Social Club honcho Joey Baldino, eliminated a la carte dining during the pandemic, in favor of a fixed-price offering. Build a meal with selections from the different categories, and it’s $55 for three courses and $75 for four. Dinner nightly except Tuesday.

Two newcomers are up and running at Reading Terminal Market: El Merkury at the Market, serving Central American favorites, and Sweet T’s Bakery, which specializes in sweet potato pies.

Restaurant openings on the way include a West Philly location for Greenstreet Coffee Co. (4533 Baltimore Ave., where Renata’s Kitchen was, May 22); the barbecue outlets Morgan’s BBQ (replacing Mistral in King of Prussia Mall, May 25) and Huff & Puff BBQ (246 S. 11th St. in Philadelphia, May 27). Looking ahead: I see a sushi spot called Ikki opening at 310 Market St. (June 1).

Bryn & Dane’s, meanwhile, will mark its rebranding to Fudi, a vegan fast food model, with an open house at the Horsham location (400 Privet Rd.) at 7 p.m. Wednesday, May 26. Featured attraction will be musician G. Love. (Fudi’s menu, incidentally, also got sauce.)

Restaurant closings include Davio’s and Radicchio Cafe; they may be permanent. Bobby Flay Steak at the Borgata in Atlantic City won’t close June 30, as previously announced. It will run through the summer.

Home Videos The WORLD of WINE – Wine News. Cheap wine, tasting notes and cooking with wine The World of Wine – May 2021 … END_OF_DOCUMENT_TOKEN_TO_BE_REPLACED

How to visit Napa Valley on a Budget. In this video Carson and I explain a few ways to enjoy Napa on the cheap. Tip and advice about how to visit Napa … END_OF_DOCUMENT_TOKEN_TO_BE_REPLACED

Home Videos Get To Know Argentina Wine | Wine Folly If you love Malbec, Argentina is your ultimate wine region. But that’s not … END_OF_DOCUMENT_TOKEN_TO_BE_REPLACED