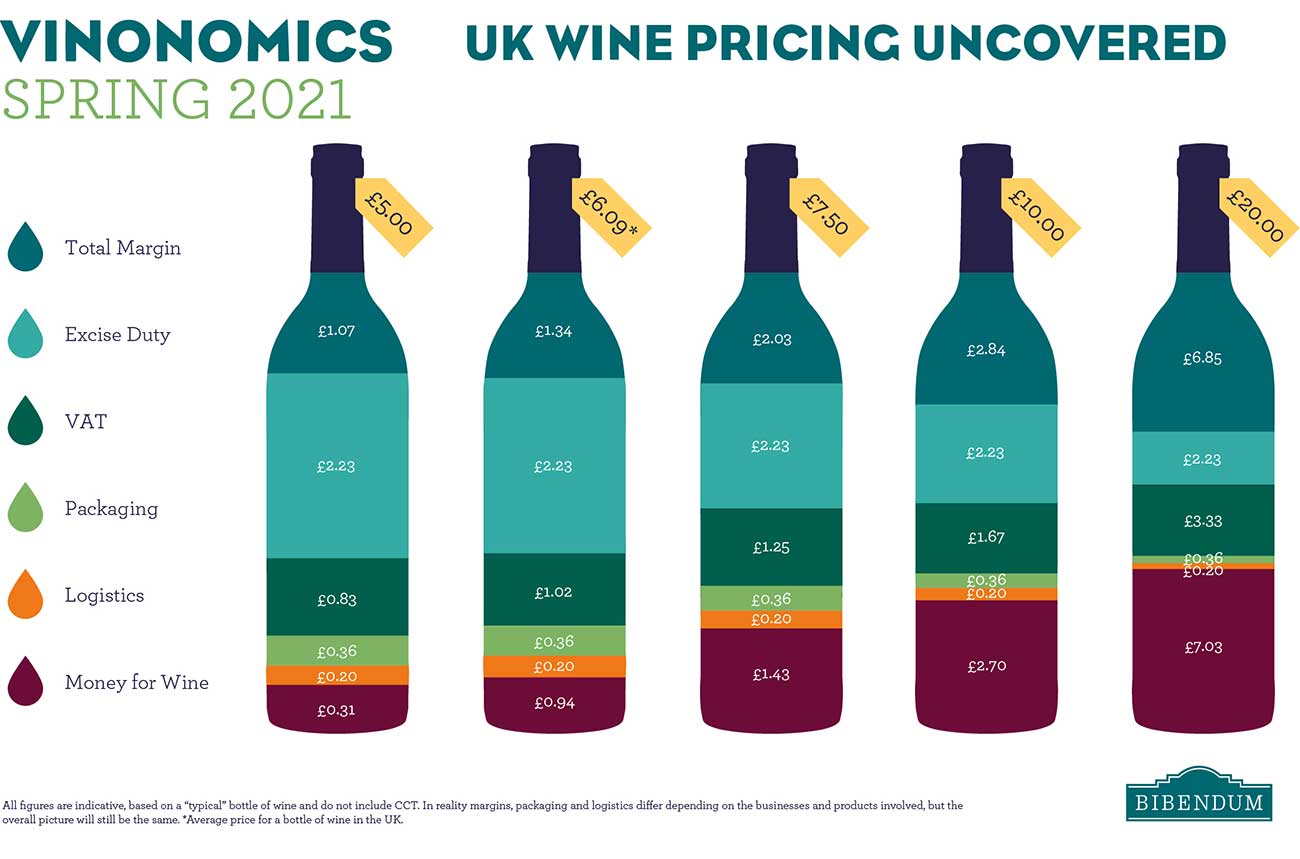 Every year we hear a raft of stories about tax on wine, as well as beer and spirits, as the UK chancellor unveils the latest plan to juggle the nation’s in-comings and out-goings.

There’s not been a lot of good news for wine lovers in the past decade, as successive governments have raised duty tax, at least in-line with inflation.

Wine duty has risen by 12% on wine since 2014, more than for beer or spirits, campaign group Wine Drinkers UK said last year.

This week, chancellor Rishi Sunak announced a duty freeze on wine, spirits, cider and beer in the UK budget for 2021.

It’s the second consecutive year of freezes. ‘We will all raise a glass to the chancellor tonight,’ said Miles Beale, CEO of the Wine & Spirit Trade Association.

Still, many in the wine trade have long argued that if you increase your spend on wine – even by a little – then you are in theory getting better value for money in the glass.

For example, the Bibendum graphic above shows that a bottle of wine costing £7.50 or £10 should mean that a higher proportion of the money is going into the winemaking, versus a bottle of wine at the £5 mark.

It’s not an exact science, because costs such as shipping, marketing and retailer profit margins will vary.

Merchants and importers have also warned about higher costs related to Brexit.

Yet, there is a broad logic to the argument.

If one only looks at duty and VAT – sales tax – the graphic above shows that more than 50% of the money spent on a £5 bottle of still wine (5.5% abv to 15% abv) goes straight to the government’s coffers.

The government actually quotes rates per hectolitre (100 litres), but the Bibendum graphic above is calibrated for a single 75cl bottle.

Tax on wine: VAT vs duty

VAT rises proportionately with the price of the bottle, but duty is charged on alcoholic strength in the UK.

For sparkling wine, the rates are slightly different.

The UK is known to have some of the highest alcohol duty rates in Europe, alongside Scandinavian countries.

Could changes be coming to UK tax on wine?

It will be interesting to see if tax on wine changes in the next few years.

UK officials have been conducting an ‘alcohol duty review’, and issued a call for evidence in 2020.

Some believe that pubs, bars and restaurants should have a different rate, compared to retailers.

Kate Nicholls, CEO of trade group UK Hospitality, welcomed the chancellor’s support for the industry this week, but also raised the issue of future duty rates.

‘As we emerge from the [Covid] crisis, we hope that the government will seriously consider a separate rate, long pushed for by this sector, for on-trade alcohol,’ she said.

Sources include Bibendum (graphic), the WSTA and figures in the government’s Alcohol Duty Review paper (September 2020).

Home Videos The WORLD of WINE – Wine News. Cheap wine, tasting notes and cooking with wine The World of Wine – May 2021 … END_OF_DOCUMENT_TOKEN_TO_BE_REPLACED

How to visit Napa Valley on a Budget. In this video Carson and I explain a few ways to enjoy Napa on the cheap. Tip and advice about how to visit Napa … END_OF_DOCUMENT_TOKEN_TO_BE_REPLACED

Home Videos Get To Know Argentina Wine | Wine Folly If you love Malbec, Argentina is your ultimate wine region. But that’s not … END_OF_DOCUMENT_TOKEN_TO_BE_REPLACED