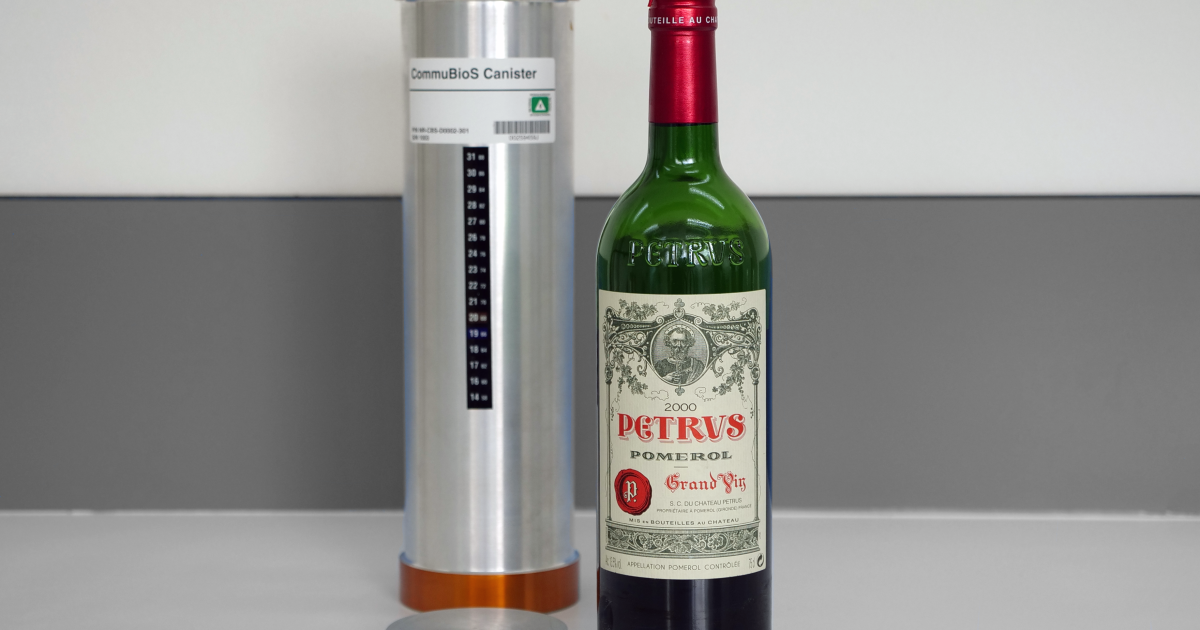 If you’ve ever wondered what would happen to wine aged for a year in space then wonder no more. A recent event in France conducted the first ever tasting of “space wine”, with one expert describing it as “more evolved” than its similarly aged earthbound counterpart.

Late in 2019 a dozen bottles of red wine were sent up to the International Space Station (ISS). The delivery was part of a scientific investigation called CommuBioS, studying how the the aging of complex liquids is influenced by zero gravity.

Earlier this year the dozen bottles were returned to Earth and a recent tasting event was conducted by lead investigator Philippe Darriet from the Institute of Vine and Wine Sciences at the University of Bordeaux. A panel of 12 people were recruited for the exclusive tasting of two bottles of the first wine to spend more than a year in space.

“Unanimously, the two wines were considered to be great wines, which means that despite the 14-month stay on the international space station, the ‘space wine’ was very well evaluated sensorially,” reports Darriet. “Differences were perceived concerning the color of the wines. Concerning aroma and taste components: the two wines were described with a rich vocabulary attesting to remarkable olfactory and gustatory complexity; sensory dimensions of sweetness, harmony, and persistence were particularly noted.”

One of the wine experts, Jane Anson from Decanter magazine, noted the wines aged for a year on the ISS tasted “more evolved” than the same wines that had remained on Earth.

“The one that had remained on Earth, for me, was still a bit more closed, a bit more tannic, a bit younger,” says Anson. “And the one that had been up into space, the tannins had softened, the side of more floral aromatics came out.”

Darriet suggests further physicochemical analysis will be conducted on the space-aged wines to evaluate specific differences in aroma, taste and color. The ultimate plan iso publish this data in a scientific journal.

“It was with great emotion that we recovered the 12 bottles of 2000 vintage Petrus in Bordeaux at the beginning of February, intact and having withstood all the constraints of preparation, travel, and storage on the ISS,” says Nicolas Gaume, co-founder of Space Cargo Unlimited, the private company working with NASA on the research project. “Of course, the analysis is still in its early stages, but the first findings are very promising for the future of the research program. We are extremely enthusiastic.”

In addition to the bottled wine, 320 vine canes were also sent to the ISS to test the effects of a microgravity environment on their development. The vine canes spent 10 months on the ISS, were planted a few days after being returned to Earth and were seen to produce visually noticeable buds and growth earlier than vines that had remained on Earth in similar conditions. Further experiments on the vines are also ongoing.

Home Videos The WORLD of WINE – Wine News. Cheap wine, tasting notes and cooking with wine The World of Wine – May 2021 … END_OF_DOCUMENT_TOKEN_TO_BE_REPLACED

How to visit Napa Valley on a Budget. In this video Carson and I explain a few ways to enjoy Napa on the cheap. Tip and advice about how to visit Napa … END_OF_DOCUMENT_TOKEN_TO_BE_REPLACED

Home Videos Get To Know Argentina Wine | Wine Folly If you love Malbec, Argentina is your ultimate wine region. But that’s not … END_OF_DOCUMENT_TOKEN_TO_BE_REPLACED