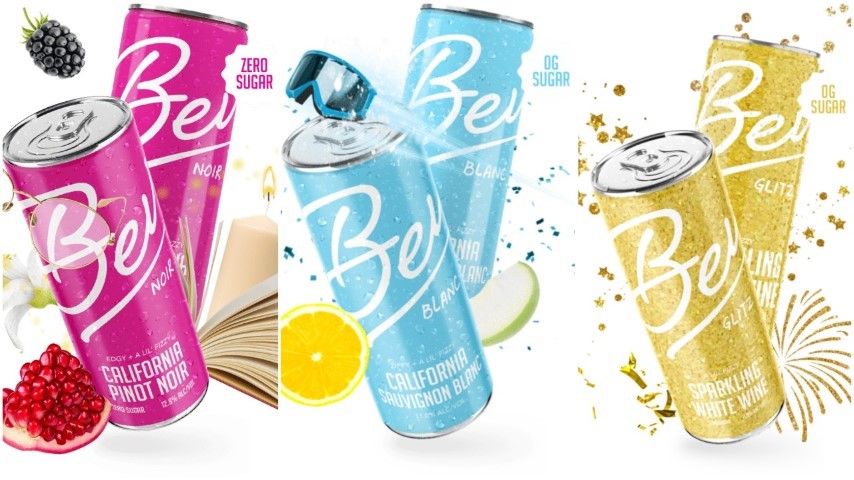 A lot of effort goes into trying to market wine as something “healthy,” by one definition or another. There are countless ways to go about this, but it’s all ultimately sort of moot: Alcohol’s universal selling point is that we enjoy its taste and the way it makes us feel, but you’re not going to find a doctor to label your ethanol delivery vehicle as “healthy.” You can get them to hedge into the acceptable range with “in moderation…”, but that’s it.

Which means that ultimately, I tend to look at wellness-based gimmicks in the alcohol industry with something of a cynical eye. All too often, these claims rely upon a basic lack of understanding among the drinkers of things like “how fermentation works” or “how the rest of the industry operates.” Unless your healthier alcoholic product doesn’t have any alcohol, it’s going to be difficult for it to register as genuinely more healthy.

So it goes with brands like Bev, a California-based maker of canned wines that is trying to make a push with the “better for you” angle. They can do this in a few ways: By offering wines with relatively low-ish ABVs, typically at 11.9% ABV (which helps keep calories lower), and by getting their product certified as sugar free. Which is to say, “no added sugar.”

Bev describes this aspect with the following: “All of our wines have zero sugar and no additives or artificial sugars. We designed our fermentation process specifically to remove all sugar after the alcohol is fermented. We’re the first recognized TTB-approved canned wine to do it and we’re biased but it’s f*cking delicious.”

This is of course ignoring the elephant in the room: A lot of wine is very close to “sugar free,” or is sugar free, but simply hasn’t been labeled as such. Fermentation is literally the consumption of simple sugars by yeast, which is converted into ethanol. Wines fully fermented to dryness simply don’t have a lot of residual sugar in them, or miniscule amounts. “Added sugars” is another matter, but you won’t find them in anything you’d think of as “legit” wine—only the lowliest bottom shelf supermarket brands. Which is to say, Bev is marketing itself as something unique, but finding wine without added sugar isn’t difficult. The product is a bit more unique when considering that it’s coming from a can, but at that point you’re splitting hairs.

Now that we’ve got that out of the way, there are things to like about the company. It’s owned and operated by women, as the “Made by Chicks” tagline would suggest. Most entries in the series (even the red wine) are lightly carbonated, for folks who are into that. Each 8 oz can is indeed low in carbs and calories, as you would expect with the low ABVs and lack of added sugars.

The only thing left to do, then, is actually taste these three entries—the pinot noir, the sauvignon blanc and the sparkler—and see if they’re the sort of thing you’d want to drink when divorced from the marketing copy. So let’s do exactly that.

Bev Noir is the only red wine varietal of the bunch, and a bit of an odd duck out in this category, considering the lower ABV of 11.9% and the fact that it’s also lightly carbonated. Bev says it’s “a delicate, coastal pinot, with aromatics of citrus blossoms & fresh pomegranate, paired with a light blackberry finish.” Pouring it into the glass, you can’t miss the extremely light color, which looks like a dark rose more than what you expect from a typical pinot noir. The clarity is brilliant, highlighting the little bubbles. It’s certainly an unusual look.

On the nose, I get some floral notes and some nice strawberry, which flow into notes of plum jam on the palate. This is actually quite fruity, and more “jammy” than I was expecting, with light natural sweetness. Personally, I’d call it “off dry,” which probably isn’t what the company would want to hear, but without the drying effect of oak you can taste more of the natural sweetness of these grapes. I’m also getting slightly herbal notes and a bit of minerality, along with the strawberry from the nose coming in late. Carbonation is pretty minimal, but you know it’s there.

All in all? Honestly not bad. The most unusual aspect is the very light texture—Bev Noir has genuine “red wine” flavors, but not the viscosity you typically associate them with. That does indeed make it pretty crushable, as it were. I’ve consumed worse canned reds than this.

There’s a couple of designated “white” entries in the Bev lineup, both Sauvignon Blanc and Pinot Gris, but I only have the former. Here’s how they describe it: “She’s zippy and a lil’ fizzy with aromatics of crisp green apple, white nectarine, and a light, fresh, citrus finish. She loves goofy dancing. She becomes best friends with everybody’s pets. She’s cute, but can cut anyone who messes with you! Spend a night out with blanc and have a hell of a time.”

On the nose, I’m getting green apple and sweet lemon on this one, and something a bit more like cantaloupe. It smells lightly sweet, fruit forward and inviting. On the palate, it’s actually a bit sweeter than I was expecting, with a combo of sour apple and something like lemon icebox pie. There’s a slight earthiness, and a hint of something tinny or metallic, but not a ton going on here in general. This one lacks the novelty factor of the red, and was ultimately the least memorable of the three.

Ah yes, “Glitz,” that’s definitely how you name your sparkler. The marketing copy is throwing exclamation points around like they’re candy: “Introducing the newest gal on the block! Bow down ‘cause she’s the queen. Nothing’s too much for Glitz! She’s all dressed up and ready to celebrate! What we love about her most is her outlook on the world: silver linings and sparkles. Zero sugar and all the glam, let’s make this holiday season EXTRA AF!”

The nose on Bev Glitz is a pleasant combination of green apple, honey and honeysuckle blossoms, leading to a perfectly drinkable profile of green apple and pear on the palate. It’s certainly more carbonated and spritzy than the other two, as it obviously should be, and its simple, fruity, honey and floral flavors almost called my mind back to lower-strength sparkling mead or cyser. I can find no particular fault here—it’s not complex, or elegant, but it’s not meant to be.

All in all, I’m always open to another cheap brand of canned sparkling wine—anything to allow me to open some without having to pop an entire bottle of champagne or prosecco, most of which will end up getting wasted. For those who don’t have high standards on sparkling wine—myself very much included—this does just fine.

Do I care that they’re “sugar free”? No, not particularly—the more you know about the alcohol industry, the less such terms will impress you. But Bev wines manage to be perfectly pleasant on their own merits.

Jim Vorel is a Paste staff writer and resident alcohol geek. You can follow him on Twitter for more drink writing.

Home Videos The WORLD of WINE – Wine News. Cheap wine, tasting notes and cooking with wine The World of Wine – May 2021 … END_OF_DOCUMENT_TOKEN_TO_BE_REPLACED

How to visit Napa Valley on a Budget. In this video Carson and I explain a few ways to enjoy Napa on the cheap. Tip and advice about how to visit Napa … END_OF_DOCUMENT_TOKEN_TO_BE_REPLACED

Home Videos Get To Know Argentina Wine | Wine Folly If you love Malbec, Argentina is your ultimate wine region. But that’s not … END_OF_DOCUMENT_TOKEN_TO_BE_REPLACED