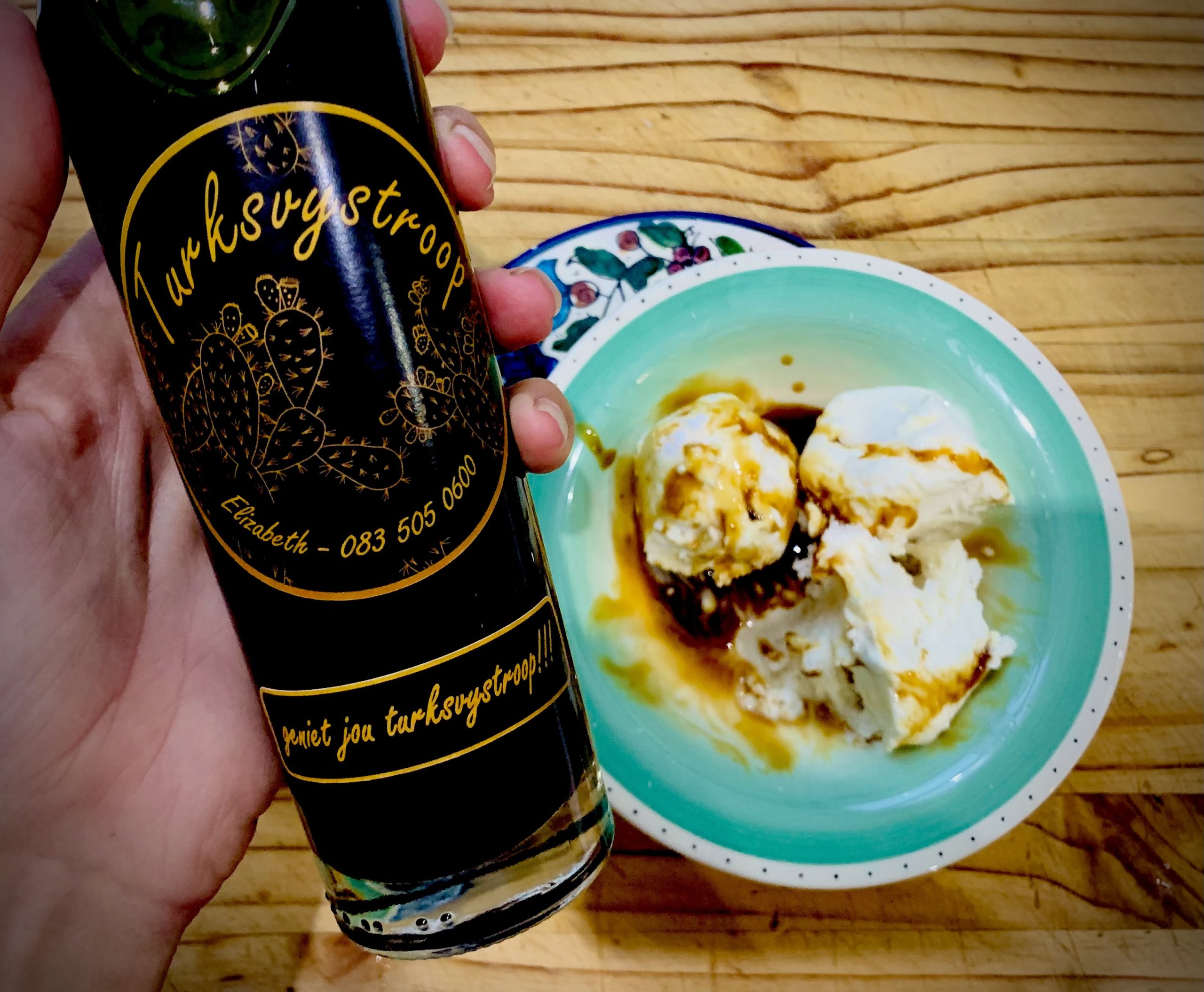 Prickly pear syrup is the taste of childhood in the Karoo. It never lasted more than a week in our home, and it has been missed dearly during the last few dry years. This year, thanks to Tannie Boy, we have the taste of our childhood again.

The writer supports the Gift of the Givers Foundation’s Drought Relief programme.

There are many complicated food folkways in the South African culinary repertoire, but the making of prickly pear syrup exceeds them all. No contest. I’ve heard of two-day baking marathons and the spitbraaiing of a whole ox, which all takes dedication and stamina. But nothing comes close to the effort needed to make one small cup of prickly pear syrup.

Prickly pears are tough buggers. They’ve adapted to the arid-most parts of our county and like most things there, they don’t go down without a fight. Even the joy of eating them as a snack in summer often doesn’t justify the effort of picking and peeling them. Prickly pear fruits have microscopic thorns that lodge in your flesh and nostrils and make you itch for days on end. They can blind you if the wind blows while picking. And then, as a last hurrah, they’ll clog you up from the inside if you dare eat too many! Tough buggers.

Still, there are those who are willing to tame these wild mustangs of the Karoo and preserve their special tangy flavour in a syrup reduction made via the most demanding of processes.

Cooking prickly pear syrup is not at all like cooking jam. I thought it would be; a simple pound-for-pound, sugar-to-fruit ratio recipe that’s cooked and voila. No. Not at all. The making of prickly pear syrup can be likened to making wine. And on that scale too.

Not many people can make it according to the ancient method, but those who do are living flag bearers of perhaps the most resourceful recipe in SA. Elizabeth Whittle, or Tannie Boy as everyone calls her, from Slagboom Farm adjacent to Addo Elephant National Park in the Eastern Cape, is one such rare emissary. “You need a whole Go’gok to make 750mls of syrup,” she states confidently. She’s just finished cooking a batch of 72 bottles for a client.

“A Go’gok is an old square paraffin drum, about 22 litres. These are used to pick the prickly pears in and take between 50 and 80 prickly pears if I have to guess.”

After picking, the prickly pears’ thin outer membrane is peeled off by hand to remove those pesky thorns. The thicker part of the skin is left on, however. “Not like when you’re peeling them to eat whole,” Tannie Boy says. “When you’re peeling them to eat the inner fruit, you can just stick a fork in and remove the thick outer layer easily. It’s a little more complicated for the syrup.”

From here, they’re thrown into the gigantic iron pots and fired over low, low heat. “With nothing added,” Tannie Boy insists. “Many people add water and sugar, but prickly pear syrup will go sour if it comes in contact with water. They need to boil on their own and create their own ‘soup’,” she explains. “You boil them slowly until they become perfectly translucent.”

The “soup” is then strained in 50kg gooiing sakke (hessian bags) to remove all the pips and gnarly bits. This process too, cannot be rushed. The soup stains at its own pace as not to force any pips or bits through.

Then the reduction starts. “We have large, flat pans that fit perfectly over the fire. Your fire needs to be very hot. At this stage, you can add some sugar. But not a lot, only 2kgs for every batch.”

Long stirrers – like spoons – ensure that the strained soup can be aerated constantly to prevent it from boiling over – and to check the consistency. “You can see how the liquid evaporates as you stir. It becomes like the inside of a Crunchie later on. The whole mixture boils down to just a few millilitres. It will reduce and become darker and darker until you reach the desired molasses colour.

“You test the consistency by holding up the spoon to see if it drips right. And as soon as it does, you have to act quickly to remove the pans from the fire to prevent over-caramelisation.”

The syrup reduction is then strained a last time through thick cheesecloth and poured in large enamel “skottels” to cool. “I use the same skottels that my grandmothers – on both sides, the Groenewalds and the Renkens – used to cook their prickly pear syrup with,” Tannie Boy says. “Cooking this syrup is part of my DNA. I grew up watching my parents make it and I’ve been doing it the same way for the last 20 years.”

She tells of her maternal grandma, Ouma Johanna Renken, who took the product even further and made sweets with the thick skins of the fruit. “She didn’t throw away the peels of the fruit when we ate it fresh, in season. She cooked it like you would winter melon or citron and made lekkers for us. The skins would be cooked until translucent and preserved in a sugar syrup, then dusted with icing sugar and rolled up into little roulades. She used to call them dadels.”

“I also try to be more resourceful,” Tannie Boy says. “I use the mash left over from the second strain of the prickly pear syrup to make my own vinegar. It has the most delightful, sweet flavour. I’ve also made a prickly pear scoby to make kombucha with. Prickly pear kombucha! It could become a thing!” she laughs.

Prickly pear syrup has become a rarity in SA over the last couple of years due to ongoing droughts. It has cut off South Africans from a beloved local treat and, more importantly, severed a financial lifeline for the farm-based entrepreneurs brave enough to cook it. “This year was the first time in five years that we were able to harvest prickly pears again. And not many. Those 72 bottles were the bulk sum of the produce.

“I remember one year – it was a good rain year – my grandma made enough money to buy a car – cash! – with all her prickly pear syrup sales! I’ll get there again, this tradition needs to be kept alive. But the droughts are definitely getting more frequent,” Tannie Boy says.

Prickly pear syrup is the taste of childhood in the Karoo. It never lasted more than a week in our home, and it has been missed dearly during the last few dry years. Some years we had the red kind, made with red prickly pears and other years, the golden-brown kind made with the sweeter, green and yellow pricklies. We never really cared which kind it was, as long as we could relish every last drop. This year, thanks to Tannie Boy, we have the taste of our childhood again.

It’s a treat over ice cream or stirred into a homemade milkshake. The best way to enjoy it, however, is seeped into a buttered slice of fresh Sasko Sam winkelbrood. Tannie Boy swears by a slice of homemade bread, she says. “But whatever works for you… as long as it’s real butter!” The butter needs to be thick and homemade, smeared on and then flipped so the slice sticks to the plate. Then, you pour over the prickly pear syrup and allow it to seep into the bread. The butter will create a barrier that keeps the syrup from leaking out. I guess it could be described as a “poor man’s waffle”.

But there’s nothing poor about it.

Like South Africa’s most prized natural resource, prickly pear syrup is extracted through effort and fortified in the fire. It is pushed to the right consistency and then revered as a sweet and sacred rarity. Pure, liquid gold.

Blend together the ice cream, milk and syrup until thick and smooth. Decorate a tall glass with some of the remaining syrup. Pour milkshake into the glass. Garnish with slices of the whole prickly. DM/TGIFood

Home Videos The WORLD of WINE – Wine News. Cheap wine, tasting notes and cooking with wine The World of Wine – May 2021 … END_OF_DOCUMENT_TOKEN_TO_BE_REPLACED

How to visit Napa Valley on a Budget. In this video Carson and I explain a few ways to enjoy Napa on the cheap. Tip and advice about how to visit Napa … END_OF_DOCUMENT_TOKEN_TO_BE_REPLACED

Home Videos Get To Know Argentina Wine | Wine Folly If you love Malbec, Argentina is your ultimate wine region. But that’s not … END_OF_DOCUMENT_TOKEN_TO_BE_REPLACED